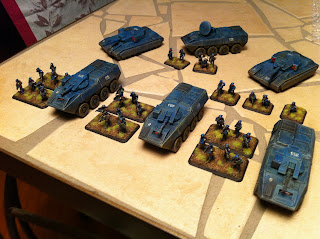 I've managed to inch out a bit more progress on the 15mm sci-fi front. The group shot above shows a mechanized infantry platoon with a couple of tanks for support. The infantry are the "Federal Infantry" from Khurasan, and the vehicles are from Old Crow - "Claymore" APCs and two "Sabre" tanks. 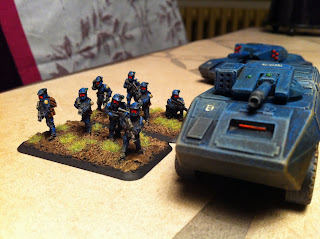 The Old Crow vehicles are outstanding - you get a number of different options for turret styles and weapons. I did most of the vehicles with an auto-cannon style weapon in the turret, and one with a low-pressure cannon style weapon. 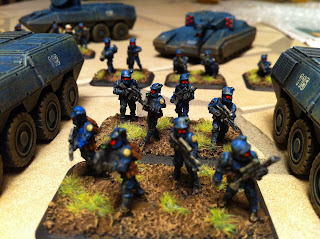 The bases are the good-ol' all purpose bases from Battlefront. 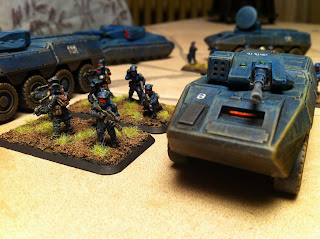 The photo above shows the autocannon armament close up. I figured each mobile platoon would have one alternate weapon of some sort to provide more varied fire support for the infantry.

You can also get a "com-cent" turret for the APCs - I painted one up for the commander's APC. This can represent a forward observer or forward air controller in Future War Commander. I still have another auto-cannon turret for the command APC to provide the option for more weapons instead. 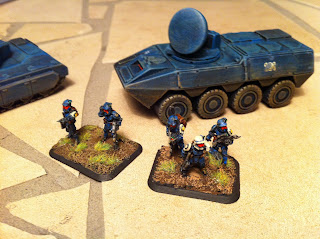 In terms of command, my stands are more modest. I put white shoulder plates on the middle-rank officers and a white helmet and shoulder plates for the senior officer. These will serve as command bases in Future War Commander.

To supplement the "Federal Infantry", I am also painting some of Khurasan's awesome "Control Battalion" figures, to serve as heavy infantry. I have only finished four bases and a command base & support drone so far, but here are some pictures. 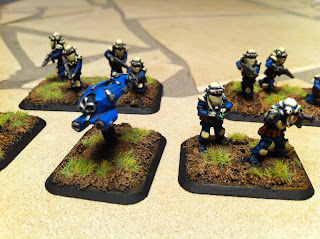 The "Control Battalion" are billed as sinister, likely altered infantry. Khurasan calls them "Riflethings". I love these figures. They look just a little off - you wonder what is concealed under the oversize face plates. 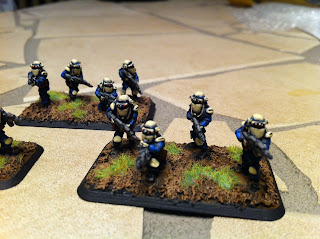 The "Control Battalion" brings to mind that old SNL commercial for "Happy Fun Ball". In the commercial, it looks like a very basic bouncing ball, but then a steady stream of more and more ominous disclaimers makes it clear the ball is not actually "Happy" or "Fun". 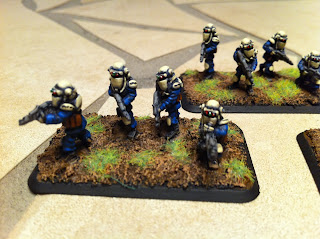 I get that same vibe from the Control Battalion. They look a little...off...a bit ominous...I can just imagine the disclaimers around the deployment of these troops - "Do Not Taunt Control Battalion"...I would love to see these models in 25mm. The drone model is billed as a heavy weapons platform. I may use it as a command figure (monitoring the special control troops), or another type of FO/FAC type model.
Posted by Greg B at 8:41 AM

Great stuff, I like the control battalion too. Your Old Crow stuff came out especially nicely.. Shows how good they can look done right.

Outstanding! Can hardly wait to face off against these guys.

Well done, Greg. I like the Old Crow vehicles - the commo turret is neat.