As I mentioned in a previous post I decided to paint my British 'Dystopian Wars' stuff with a variant of the 'Dazzle' paint scheme first used by the British in the later part of WWI. 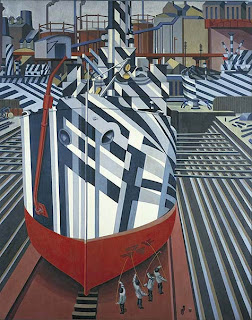 'Dazzle' paint was first developed in 1917 by British maritime artist Norman Wilkinson (who, not surprisingly, was an admirer of the cubist school of art).  Technically speaking 'Dazzle' is not a camouflage, that is it is not a pattern designed to hide, but instead was created to disrupt an observer's perception of the silhouette, size and heading of the 'dazzled' subject. From what I understand it was primarily developed to fool torpedo range-finding optics and surface rangefinders. It was really never proven how effective dazzle painting was but it often boosted ships' morale, as the crews believed it gave them an edge in combat. There are several military's organizations throughout the world today which still use the paint scheme for their vehicles/ships. In civilian terms dazzle paint has been quite popular for several applications (fashion, radar speed trap boxes, etc.) - I know when I worked at Ford in Detroit the vehicle designers would often paint their super-secret concept cars in a dazzle paint scheme in an attempt to foil any outside onlookers/photographers.
The larger capital-class ships can swap out their turrets to slot-in shield generators which is kinda cool. The big-ass Dreadnought sports a ram on it's bow for those players who like to go in full steam and mix it up (cough, Dave, cough...).

Currently I'm working on the Prussian fleet which I hope to have done in a week or so.

These look really cool. Alternative naval combat must be in. Maybe because it requires less terrain and models, GW released some new fantasy sail game which isn't Man-O-War.

Are you (and the group) planning to stick to the "Naval theme" for Dystopian Wars or are you thinking of adding the land forces as well?

Thanks, BVidler. Right now we're just sticking to the air and naval game but I expect we will broaden to the land stuff as well as we want to run a small campaign using the entire system.

Wow - superb! Thanks for posting that, Curt!

My pleasure, Dal, and thanks. I hope to have the Prussians posted as soon as I can get some time to take a few pics.

Great work on the camouflage scheme!