Further in the ongoing 15mm sci-fi escalation, I've painted a few of Khurasan's "Space Demons" obtained from a TMP member in a moment of weakness (mine, or his?) 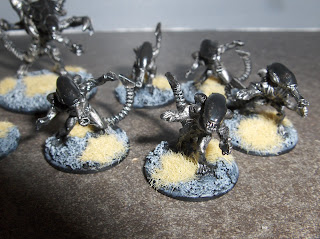 The models are fantastic and I'm glad I took the opportunity to pick them up, particularly as Khurasan is now hors-de-combat for the immediate future.

I based them individually on pennies (as opposed to Flames of War bases like the Earth Force Marines) for two reasons: first, I'd like to be able to use them for skirmish games in 15mm like Space Hulk; second, I think they look better based individually than as a unit (who ever heard of a "unit" of Aliens??); third, they were already glued to the pennies when I got 'em.  Okay, that's three reasons ;-) 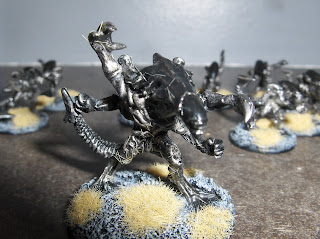 That is one large Space Demon!  (S)he's painted in the same way, based on a washer.  This bad boy/girl will wreck your shizz, no question.

So that's the latest update on 15mm sci-fi!  Now that Canada Post is moving, be on the lookout for some more updates (and new armies?) over the summer.

ps Sorry about the stray bits of static grass on the models, I was in a rush to take pics this morning.  d.
Posted by Dallas at 9:48 AM

Crap - that is bad news about Khurasan...

Any second thoughts re basing overall?

Nope! Fully committed to the FoW basing system for all my 15mm SF "regular" armies... :-)