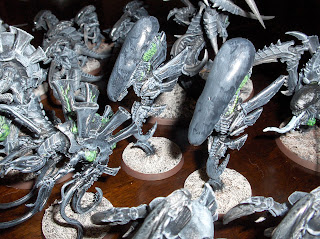 Another New Insane Project virtually completed!  (I say "virtually" only because no wargaming project is ever completed, is it ;-) 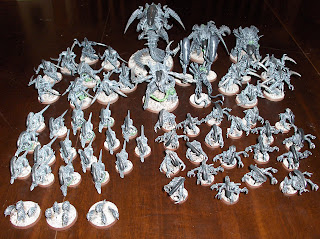 Anyway, here in all of its xenomorphic glory is my new Warhammer 40K Tyranid army, "Hive Fleet Nostromo".  Of course pretty much everyone recognizes the reference from the classic "Alien" movie - "USCSS Nostromo" was the name of the space semi-truck on which Captain Dallas (!) and the rest of the bunch served as crew.  Eventually I might write up some silly story about how the Rogue Trader vessel Nostromo made first contact with this particular Hive Fleet and how "First Officer Rellen Ipley" escaped that encounter and brought news of the Xeno threat back to the Imperium... but that's for another post.

For now, here are some pics of the new army.  They are all standard GW Tyranid models but pretty much all have been converted, either with Chapterhouse's excellent Xeno heads or with my own cack-fisted greenstuff head conversions.  They were painted in a very basic style - black undercoat, heavy drybrush of very dark grey, light drybrush of Space Wolves Grey, boltgun metal for teeth, claws and biomechanical bits, bright green for gooey parts.  I'm really happy with the groundwork colours - Bestial Brown drybrushed with two Ceramcoat colours - "Mudstone" followed by "Sandstone". 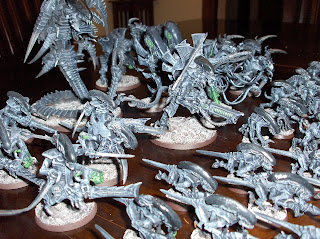 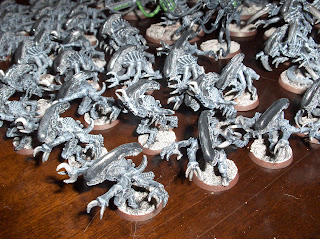 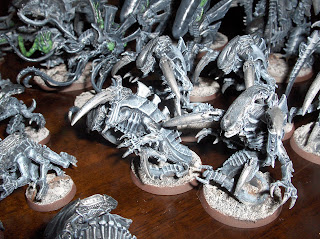 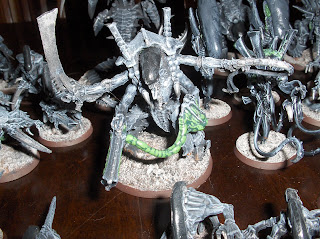 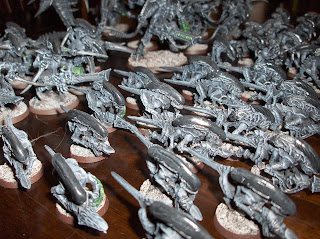 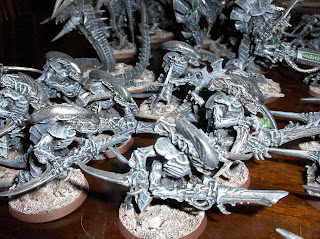 Tonight I finished some Hormagaunts, spore mines and objective markers, but I also have an unassembled Trygon too.  I'm looking forward to pitting the basic army against Mike's Space Marines (and eventually Dave V's Eldar if I get brave enough ;-)
Posted by Dallas at 10:55 PM

Having worked a lot on my Aliens Space Hulk conversion it's great to see a project like this. The models look excellent, and the project is suitably insane. Keep up the good work!

Thanks! I should add that I was inspired by some excellent work on the "alienids" at http://www.timkline.net/alienids/index.html

Now all you need to do is make a Giger-esque display board :-)

... and a perfect-bound full-colour army list and fluff book, of course ;-)

Nice work, Dal! I particularly like the metallic for the teeth and innards - very 'giger-esque'. You know, this is one army that would not be hurt by spraying with a gloss varnish as a finishing coat (and then touch up the groundwork with brush-on matt). Look forward to hearing how they work out.