Yet Another New Insane Project 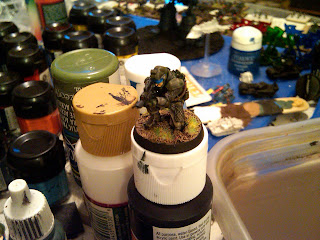 I have been eyeing my pack of new 40k plastic Valkyrie models (obtained in a greal sale from Maelstrom Games - they are insane - use them while they are here!) for some time. I have already assembled and painted a couple of them - one to fly with Gün Schwarm, and the other to accompany my vast force of "blue" Imperial guardsmen. But I have always wondered about doing an all-flying Imperial Guard force. Of course, this is hardly original - I think a lot of players are out there trying it (or something similar), but the notion never quite let go.

I have also always liked the look of the Elysian drop troops at Forgeworld. Yes - it's a bit of a flush money-wise, but the bulky look of the current Cadian plastics (which are still fine figures) doesn't beat the lean look of those Elysian troopers.

So I figured "what the hell?" and took the plunge, ordering some Elysian drop troop figures from Forgeworld to serve as the troops that will accompany the Vaklyries into battle. After doing one test model last week (pictured above), I have painted a few more up over the weekend. Here are some blurry pics from the painting table courtesy of the camera on my blackberry: 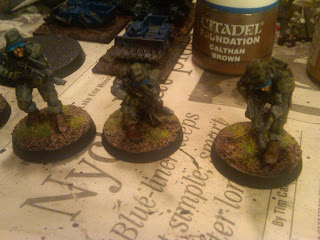 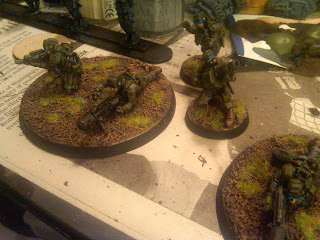 The paint scheme is intended to be a modest, muted one, with dark green armour and grey "jump suits". As with the Bundesguard (yes - I'm still working on those too and no, focus is not a gift of mine) the idea was to have troops that looks more like "average" soldiders, as opposed to most of the 40k stuff I paint, which as a lot of blues, whites and other colours that you probably would not see on the battlefield.

Thanks to the magic of Devlan Mud wash, it paints very, very fast. 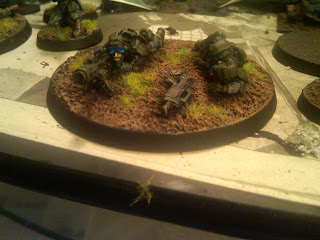 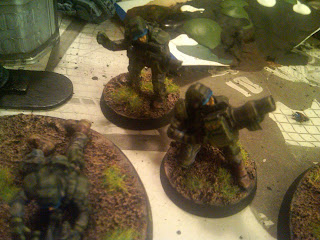 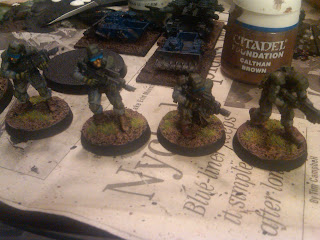 The models are very nice, but very, very different from the usual 40k fare - not just because of the randomness of Forgeworld either. For starters, they are quite slight compared to the equivalent 40k figures. This is something I have noticed with the few Death Korps of Krieg guys I have painted from Forgeworld also. I know nothing of sculpting, but Forgeworld generally seems to keep their human models to a slighter proportion than the current GW plastics.

The packs of models themselves have their share of Forgeworld challenges (bizarre, useless instructions, and some significant flash in some cases) but overall come together fairly well. Use caution when assembling - the shoulder plates, bayonets, canteens, gun clips etc are easily lost when clipping them off the sprues. I really had a tough time with the prone guys too - but I think that indicates that I am a very impatient figure modeller, as opposed to an issue with Forgeworld modeling :).

On the downside the Forgeworld sculpters, I imagine to capture a bit of the "paratrooper" feel of the Elysians, seem inclined to have a number of prone figures, and make even more weapons into two-man teams. In my opinion there are too many two-man team models with the Imperial Guard already. I'm sure other gamers will disagree, and that's fine - it's a question of subjective preference, after all - but I don't care for prone figures in a 25/28mm wargame (as opposed to some kind of diorama) unless they are snipers. I also don't like many two-man models in a skirmish game - it's a wargame, not a duel of dioramas. By these (possibly silly and likely in the minority) standards, there are too many prone models in the Elysian lineup, and many that have to work in teams. Exhibit "A" is the melta guns (pictured above).

I tried to work around this, but you end up with spare, unusable figures. Also in terms of scale, while they have made the humans slighter, Forgeworld has matched the size of the melta guns to what is current in 40k, creating a bit of a disconnect. I have one model (not painted yet) purporting to carry the melta gun as if he would fire it, and it does not look right at all...the melta-gun looks huge. Cue the "suspensors" from Rogue Trader!

Anyway, overall, this project is fun, and really like the sleek look of the troops, and the sci-fi feel of the visors. My whingeing about the two-man teams and prone troops aside, the sculpts are really cool. These guys will go up pretty fast. The Valkyries to match them will take a bit more time though (I am not a fan of model-building, after all), but the scheme will hopefully paint as fast on the Valks as it does on the troops.
Posted by Greg B at 8:57 AM

Forge World putting special weapons prone with assistant gunners is an interesting choice, since the rules don't support this. I guess you'd just treat them the same as a heavy weapons team - a 2-wound, T3 creature.

Dave - thanks what I figured. I'll just treat them like a heavy weapon team.

I will try and use "singles" in the squads, and leave the two-man teams for the special weapon squads.

The more singles the better.

One of the downsides to fielding heavy weapons teams is their vulnerability to S6+ weaponry. A single hit from a plasma gun or shuriken cannon kills a team outright.