On the weekend I finished basing and painting a good chunk of the Space Marine forces I want to finish for Epic 40k. While both will have good times killing Orks, Squats, Tau and Eldar, I really want to play some more "classic" games set in the Horus Heresy - the 40k "period" that really got Epic launched.

For the "loyalists", I went with Dark Angels, a chatper that is classic, unique and reconigizable without being uptight (Ultramarines), absurd (Spacewolves) or dumb (Blood Angels). I have to say, the Imperial Fists would have been cool too - but the Dark Angels win because they paint up way faster!

It's a small forces - just one tactical detachment, with some Dreads and Whirlwinds in support. 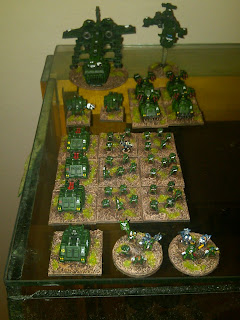 I have finished a lot more of the "traitors" - the Emperor's Children (or inspired by the Emperor's Childern). I used the actual Space Marine models to capture the rebel feel - these are the forces that rebelled, not the tools who hang around the Eye Of Terror sticking a tail and five horns on to every piece of equipment they have. 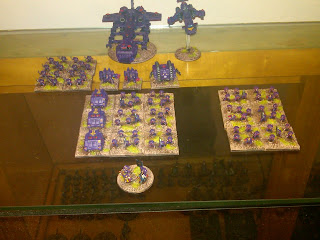 Each side has some flyer support, so the Marines can fight in true "marine style" (i.e. come in from off-planet and kick butt). There is still more to finish for each side, but the great thing about Epic is that it paints stupidly fast, so I hope to have the forces pretty much done in a couple of weeks.
Posted by Greg B at 9:49 AM

Having fun looking through your old Epic posts. Just so you know I have a decent force of Imperial Fists (for no other reason than I like yellow and their retarded name). We'll have to try a Heresy game with this stuff sometime...

Thanks guys. Curt - fully agree on the Imperial Fists, right down to loving the colours and the odd attraction of a stupid chapter name.

The great fun of playing Epic 40k is that you can play the actual heresy, not the parody version of today where the Chaos strategy appears to have their opponents collapse with laughter at the sight of their stupid equipment, ridiculous monsters and Fraggle Rock-inspired demons.

And watch out for Angron. Cause' he's "angry". Oooooh. Just wating for Forgeworld to release Grouchor, the Lost Pouter Primarch...

hey, hey, hey... let's not confuse the current Khaos Komedy Kodex with the new Heresy-era stuff coming out from Forgeworld.

The Forgeworld stuff is "generic" in that it can be used for either Loyalist or Traitor forces. Like our beloved Space Marine game, you can paint your stuff in the colours of whatever Legion you like and battle for Horus or the Emperor. There's no chaos iconography on any of the Heresy stuff. Same models used for both sides. Even Angron, OTT as he is, doesn't have any chaos iconography on him, and only 5 skulls ;-)

Yes, I completely agree, the Forge World stuff is typically far superior in overall design to the silly amped-up models currently coming out of GW. I can handle a certain dose of gothic design, but when you can't even discern core elements of the figure's silhouette (i.e. Is that supposed to be his head/arm/leg?) then you have some real problems.