Admiral Orias Maccabeus of the Imperial Navy smoothed his uniform reflexively. An in-system warp jump always gave him the jitters and it would not do for his crew to detect any discomfiture. One slight miscalculation by the Navs and the ship could end up in the heart of a star, or worse, lost in the Warp. It didn't bear thinking about, so Maccabeus closed off those thoughts in a corner of his mind and locked that mental door, for the thousandth time in his career.
Maccabeus stood on the command deck of the battlecruiser Titan's Hammer. Outside the reinforced plexisteel windows, a blue and yellow planet dominated the view. Alta Mexicosa, once an Imperial resort planet. The admiral thought back many years to a visit he'd enjoyed there. The sulfur beaches were smooth, the water warm, and the cold synthihol drinks copious.
But now, even from orbit, it was obvious that all was not well on Alta Mexicosa. From his vantage on the bridge of the battlecruiser, Maccabeus could see dark streaks of smoke ribboning across the lower atmosphere, here and there punctuated with the blooms of megaton-strength fusion bomb explosions. What a shame, he thought.
The vox broke the silence with a squeal of static. "Communication for you, Admiral - secure channel," said a deck officer. "In my quarters," Maccabeus replied, and strode off the bridge as the deck officer transferred the signal.
In ten minutes a whistle sounded to announce the return of Admiral Maccabeus on the bridge. His hands smoothed the front of his tunic. "Ensign Zacharias, activate the virus bomb protocol, authorization omega gamma seven. May the Emperor have mercy on our souls." 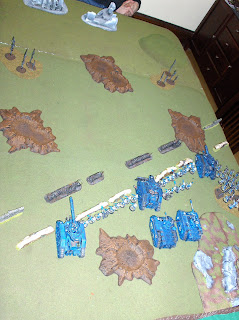 Last night's game was a large Warhammer 40K contest, pitting my Nurgle plague army against Greg's Imperial Guard, 2500 pts per side. The scenario was taken from this month's White Dwarf. In our game the Nurgle force was attacking one of the last Planetary Health Organization labs working on a cure to the porcine fever virus. The Imperial Guard were defending their deployment zone on one short table edge (24" in). The Nurgle force had to have at least one scoring unit in the Imperial zone at the end of the game - random game length of course. 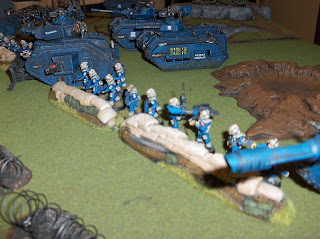 Some of Greg's sweeet Perry Twins Guardsmen and their armoured support
Writing the list beforehand, I wondered how we could possibly lose. Three squads of 10 Plaguemarines (two in Rhinos), two squads of 10 summoned daemons, 15 traitor Guardsmen, a horde of 17 mutants (and these are ALL scoring units), a Dreadnought, a Predator, and to top it off, Typhus and a retinue of 10 Nurgle Terminators!
Then I watched Greg deploy his army... Leman Russes galore (including a Vanquisher) Chimeras, Sentinels, and tons of troops liberally festooned with lascannons. (S9 AP2 really hurts even if you're T5 like my Marines). Greg, Frederick and Mike F. ran the Guard while Dave V. and Cam helped me run the Plague Host. 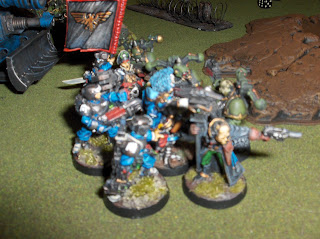 Nurglers doing what they do best
I basically picked a point on the flank and ran everybody towards it. The Predator was blown up in Greg's first shooting phase and the traitor guard and mutants really suffered from pieplates being dropped on them. The Rhinos made it into assault range before being immobilized and/or blown up and that's when the hurt began for the Guard... Daemons arrived from reserve in the nick of time and as the Nurgle boys got stuck in one question remained... "where the #%^$ is Typhus?" 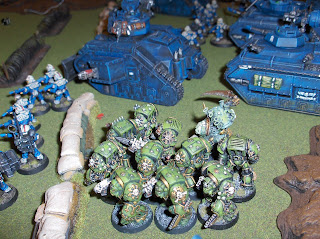 Typhus and the lads, ready to party
Well, he took his sweet time appearing but it was worth the wait. The deep-striking Herald of Nurgle and his hard-as-nails terminator retinue picked a point in the middle of the Imperial line and stuck the landing. As they fanned out to wreck some sh!t the rest of the lads redoubled their efforts. The Imperial shooting really was quite subpar as the Guardsmen seemed to need more time on the butts... the happy Nurglers were making saves and Feel No Pain rolls for once, too, so it was good times for the followers of the Father of Decay.
The wind really went out of the Imperial sails when a lone Plague Sergeant (I called him Stinkfist), having survived a round of shooting that wiped out the entire rest of his squad, dashed around the back of an adjacent Leman Russ and went ripsh!t on it with his powerfist, blowing the tank to Kingdom Come and killing several of his own comrades in an adjacent close combat with some Ogryns. The Ogryns lost the fight and after several more vehicles were blown by the Terminators, the Imperials threw in the towel. 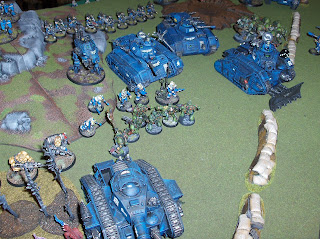 Sergeant Stinkfist's squad about to get lit up - he is second from right
I enjoyed the game on several levels. The scenario was simple enough, I was making some die rolls, Greg's stuff was awesomely painted and great to see en masse, and my Nurgle lads broke their duck with their first win, bringing their record to 1-2.
Good times!
Posted by Dallas at 1:45 PM

It was fun breaking the "Typhus Curse."

We'll have to do a proper Eldar vs. Chaos throwdown at some point. A classic match up...

Guess I'll have to break the Imperial Guard curse somehow...going on four years without a win (in fact, have never won in the 5th or 4th edition).

I can say the blue is inspired perhaps by the Toronto Maple Leafs...

Stuff that will really buff the Guard:
- Orders (at both the platoon and company levels), coupled with True LOS;
-Company level Advisors: Astropath (+1 reserves rolls), Officer of the Fleet (-1 to enemy reserves rolls);
- Veterans as Troops;
- Mobbing up squads into one big mob;
- Lots of melta guns (Melta is the new "black" wrt popping vehicles - they're the reason I don't bother taking upgrades on my skimmers any more);
- Psyker Battle Squads (can you say "Leadership 2, sucks to be you";
- fast skimmers (Valkyries - you could proxy using your Hind)