My sixth and final game of the tournament was on one of those great 8' x 4' dioramas that were once featured in the pages of the late Canadian White Dwarf.

Opponent: Dave's Chaos:
Khârn the Betrayer
A big Demon
Several Chaos Marines in a Land Raider
A large squad of deep-striking Chaos Terminators w' an autocannon and a lot of plasma
A squad of other Chaos marines
A pack of little demons
A pair of Obliterators

The whole point of the game was to see who could control either of two Tau research centres, which were located near each other on the top of a very large hill. IIRC, forces had to be within 3" to score or contest.

The table was mostly jungle terrain, with a range and LOS within the jungle of only 6 inches. The ONLY clear terrain was the moat-like river running around the entire hill. It was shallow enough to not count as difficult terrain.

I did not think that there was any way I could shift such hard Chaos troops off those objectives once they parked themselves on them. Eldar firepower was mostly nullified by the heavy jungle overgrowth. So, I decided to play for the draw.

Eldar was to go first, so I declined to set up. The Chaos forces set up everything except their deep strikers and the big demon (more later). One squad ran toward the western building, and a pack of demons ran towards the eastern building. Khârn and his boys in the Land Raider drove up the hill.

The first Eldar forces to show up were the Farseer, the Fire Dragons and the Howling Banshees. I sent them flat out eastward following the river, risking difficult terrain tests to get the Farseer to help cover the Serpents' flanks and rear.

The Chaos Land Raider parked in between the two facilities, and Khârn and his marines hung out. Each building got a squad of troops or demons to guard it. One of Khârn's men turned into a Demon, who came into being by the pack of Demons at the eastern Tau building.

The remainder of the Eldar forces showed up. I sent them westward down the river, to split up the attention of the Chaos forces.

The Terminators and the Obliterators dropped in. The former killed four of the five Warp Spiders, but the exarch's morale held. The Oblits killed the Banshees' Serpent: 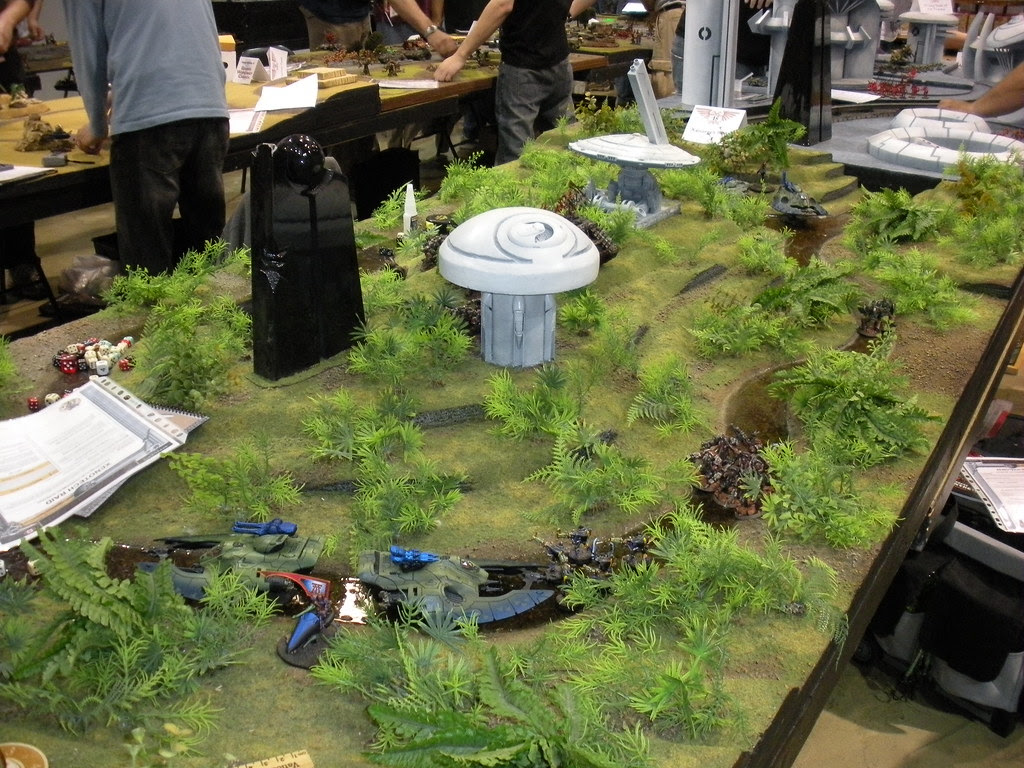 The mounted Eldar forces moved around the large hill, trusting to their speed to keep them alive. The Banshees picked themselves up as best they could and splashed towards a path up the hill.

The Spider Exarch hung around and shot up the Terminators, wounding a few and killing at least one. The Termies took the bait and stayed in the river to gun down the Exarch. This was one less turn of them running towards an objective.

The game proceeded in such desultory fashion for awhile, with no real action as the Eldar skimmed around the periphery of the hill.

At the start of the fifth turn, I risked everything on one bold stroke.

The Farseer cast Doom on the big Demon. Then, passing difficult and dangerous terrain tests everywhere, the three surviving Wave Serpents and both jetbike HQ's crashed into the jungle, moving to within 3" of both Tau facilities.

The Dragons and Farseer were by the eastern building, closely followed by the Banshees in the event another turn was required: 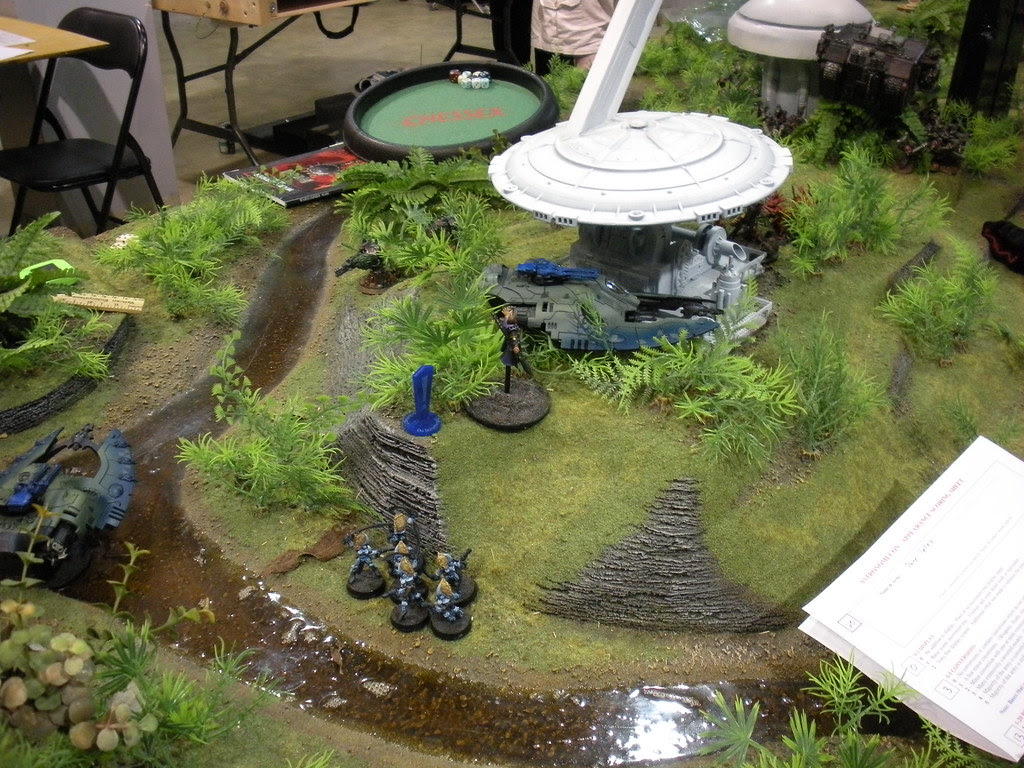 Both Avenger squads and the Autarch ended up by the western building.

I could see my opponent's quandary. With everyone buttoned up, and the limited range of both fire and movement, he was at first unsure what to do. In the end, the Demon retreated away from its potential demise at the hands of a Fire Dragon firing squad, and the other demon pack snuggled in around that eastern building. The Land Raider tried to ram an Avenger Serpent, but failed.

Shooting damaged one Avenger boat, but Khârn and his evil marines then failed their assault contact move through the jungle, and stood staring at the Dire Avengers.

The Terminators managed to get some troops into contact with the other Serpent, but failed to do anything of note: 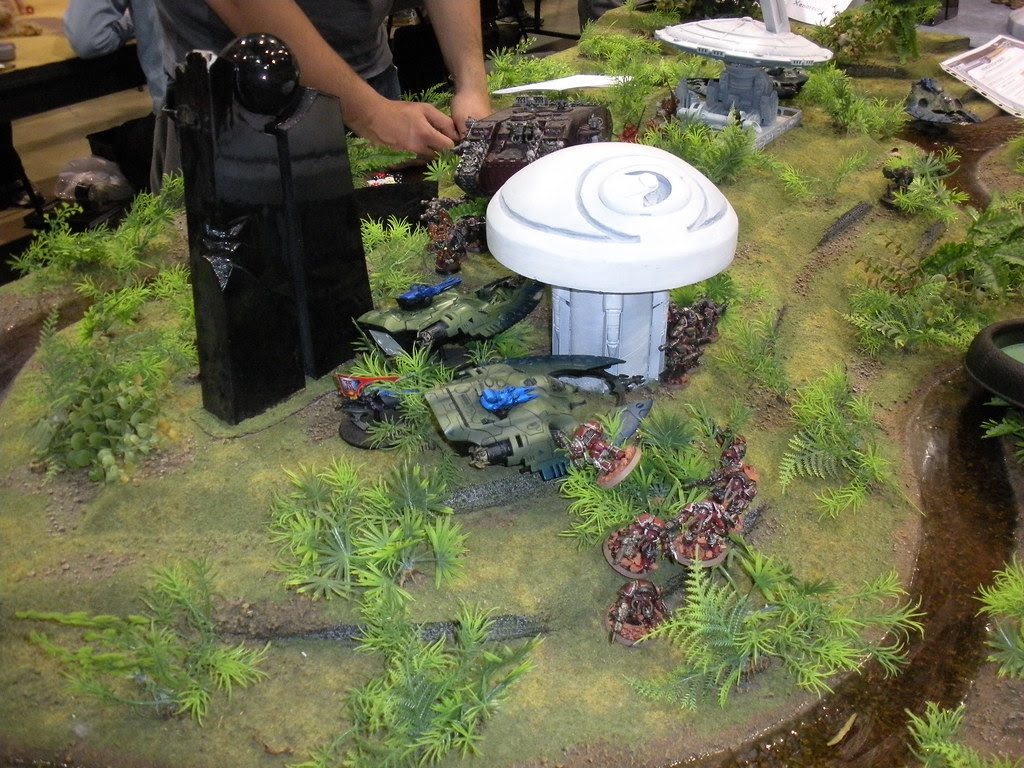 For random game length, my opponent rolled the die, getting a "2."

The game was over, with both Tau buildings heavily contested.

Six fun games over two days, playing interesting scenarios on pretty terrain. Plus, I was able to closely examine some really well-painted and -modeled armies.

I recommend Astro (either in Toronto, Vancouver or Winnipeg) unreservedly.

In the end, I came in 7th place out of 50, and won the prize for the Best Army List - a very cool, lit-up Imperial "computer" as a plaque.