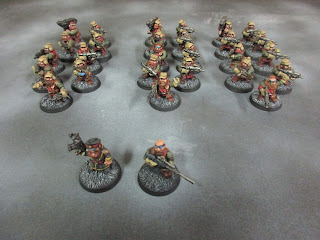 Well, this story began back in the Springtime at PrairieCon, western Manitoba's longest running (and obviously, best) gaming convention.

I've been involved with PrairieCon as an attendee, organizer, or volunteer for just about 40 years. For the last... let's say "many" conventions, I've helped run the game auction (that's me auctioneering in the green shirt below) 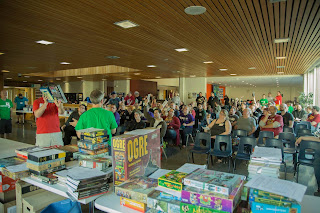 Anyway, at the last PrairieCon auction, one of the final lots was a large box of about 5 pounds of random miniatures. This was at the end, after about two hours of auctioneering, and I was beat. But the boxes within the large box of minis were tantalizing, to say the least, with some nice vintage Citadel miniatures boxes featuring prominently. WHFB Skarloc's Wood Elf Archers, 40K Eldar Harlequins, Space Marine Terminators, Space Ork Raiders... awesome stuff. Plus a ton of other old Ral Partha and Grenadier boxes. There was no time to verify contents of any of the boxes because I had to start the bidding. So away we went.
I wasn't gonna let this lot get away, even though I had no idea what was actually in the boxes, and I ended up winning the lot. Then it was time to sort out what I'd gotten myself into. And unfortunately, the very cool boxes were somewhat misleading because most of the contents weren't there. I think the Skarloc's box and the Harlequins box were missing only two models each (which I've since sourced from elsewhere), but the Terminators box and the Space Ork Raiders box were full of... SQUATS! Nearly a full plastic box worth of infantry models (35 of 'em), plus more than 25 metal models, including bits of bikes and some Chaos Squats in exo-armour. WOW!
So since I'd always thought the old Squats were kind of cool, and I'd now lucked into practically a whole army's worth of vintage models, I've decided to paint them. And this is the first post of several where I'll describe how I've done that. 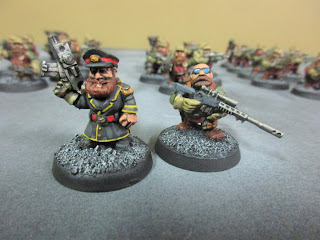 First off, a confession. Although I'd gotten a whole army's worth of Squats in one go, I can't help but add to the group with other stuff. This includes a very cool Squat Commissar from Wereweevil Miniatures out of Australia (more on them later). The chap on the right is a plastic Squat from the original "Space Dwarfs" box, with a sniper rifle from Victoria Miniatures (more on them later too). 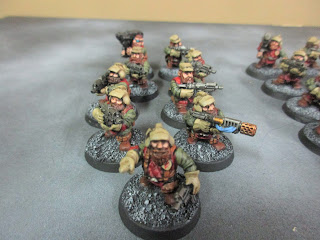 I've painted 27 more of the lads so far and have organized them into a platoon of three sections. Each section has 9 models including one trooper with a heavy bolter and one with a special weapon (melta, flamer, or grenade launcher). The rest of the troopers carry lasguns from Victoria Miniatures. 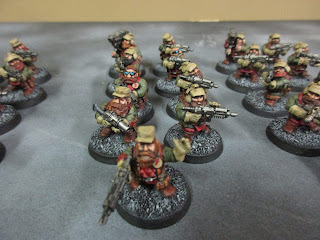 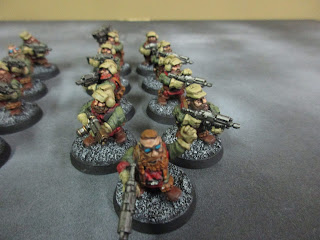 Third section. Since the plastic Space Dwarfs box only included three different heads (helmet, cap, blad with sunglasses) I did a lot of work with greenstuff to put some hair on a few bald heads and make some beards a bit bushier. 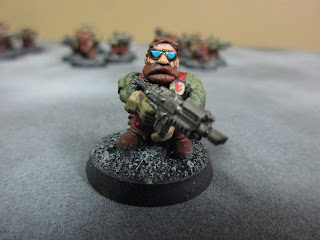 Close up of one of the squaddies. Paintwork was really simple - helmets and gloves in Zandri Dust, flak vest in Mephiston Red, shirt and pants in Castellan Green/Deathworld Forest, leather gear in Mournfang/Skrag Brown, boots and most of the beards in Doombull Brown. I went over the lot with Agrax Earthshade and re-highlighted in the base colours. 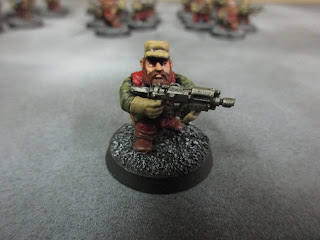 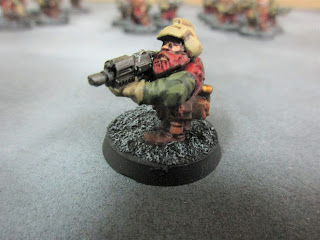 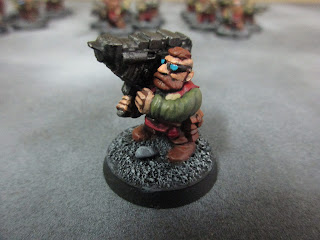 Unlike all of the other weapons which came from Victoria Miniatures, the heavy bolters are from the original Space Dwarfs box. 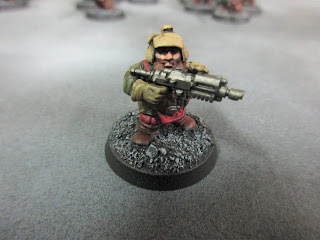 Some of the arms required some greenstuff work to make 'em fit with the Victoria lasguns. I do much prefer them to the old GW lasguns though. 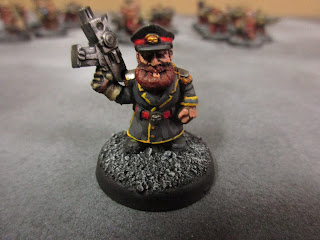 This is the Wereweevil commissar. The company makes some very cool not-Squats; expensive, as they come from Australia, but I lucked out and found a bunch for cheap on eBay. 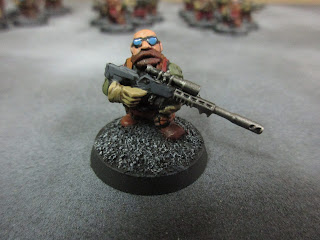 I love this sniper, the Victoria rifle looks really good. 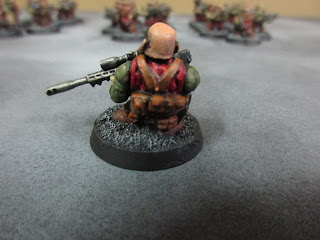 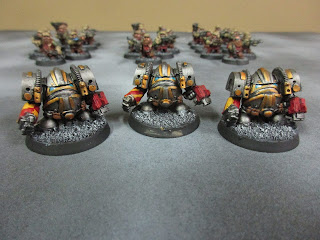 Speaking of Wereweevil, how about these dudes? They're the Termineggs and they mix in very well with the old exo-armour Squats. They did need some conversion though - the Termineggs come holding guns in both hands and that doesn't suit the loadout in 40K. But never mind - I have a bunch of RTB-01 Space Marine power gloves in the bits box so I swapped those in. 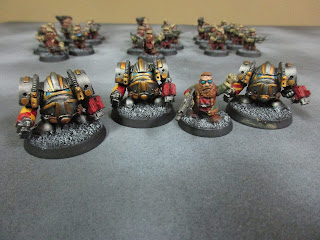 Here they are with a Squat trooper. 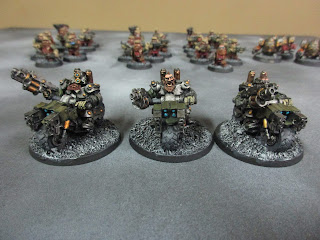 Lastly - gotta have bikers! These are from Ramshackle Games, and I much prefer them to the old Citadel bikes. These ones are quite workmanlike and not crazy choppers like the vintage ones. These look like military equipment. 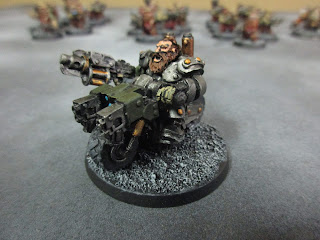 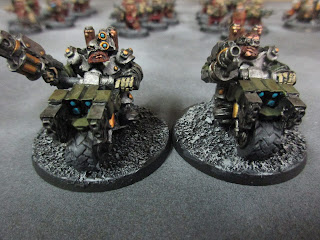 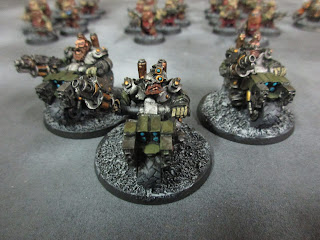 The Ramshackle bikes are great, albeit slightly on the small side - but no so much as to be really noticeable. The company has a ton of bikes and stuff to supplement a Squat army and I'm looking forward to painting more. One tip though - the resin that these are made of is a bit tricky to glue together - superglue for sure but sometimes a bit of greenstuff is needed too.
So that's the first tranche of models done. Next up is a command section for the platoon as well as some more bikes.
Stay tuned!
Posted by Dallas at 12:30 PM

For the sake of historical accuracy I should add that as a primary source, I can tell you that Dallas was a little less enthusiastic upon discovering the contents of each box! However, I don’t think it took long before a new project took root from that dark time. The squats look great and it’s probably a safe bet you wouldn’t have collected this many squats if it weren’t for that auction! I also agree that the bikes look much nicer than the choppers. Now you just need to find yourself a proper land train instead of that Godawful moon rover for the votan!

This is a great project Dallas! Every part, from the Prairiecon auction and the history there, all the way to a new Rogue Trader era 40k force arriving on the table! The models look great, and in particular, a Rogue Trader showdown with some Orks will be great fun! Well done dude!

As Mike said, we now await the Land Train...

Yay, long live the Squats, their Trikes, and Beards.
I knew they were merely Gypsy touring the Galaxy.
Down with Votann and the upstarts.

Seeing a while load of squats together warns the cockles of my heart. Cracking work!

WOW! What an amazing collection!

How can you possibly say you prefer the Ramshackle bikes to those badass GW Squat choppers of yesteryear, though!? Sounds a little like sour grapes to me... ;)

I actually have a pile of the Ramshackle Games jet bikes, which are really fun. I went all in on that kickstarter. I put them together for a jet bike racing game I did at ToonCon in 2020.

Thanks guys! @tim, sorry to say I was never into the "choppers" in the original Squat range, I think they just look silly, and if you've ever ridden a chopper they are NOT suitable for off-road riding by any means. The trikes are equally goofy IMHO... I like the Ramshackle ones that are basically kettenrads with a cycle front wheel and tracks. But this is just personal preference and others may like 'em. In fact I ended up selling some Squat bike parts and the Chaos Squats in exo-armour, and some other bits, and the proceeds covered the entire original cost of the auction lot!

I don't mind the ramshackle bikes at all. I've considered more than once picking up a few... but just couldn't justify it to myself.

The choppers are for sure ridiculous and impractical... but that's kind of what I love about them. I like the idea of rogue trader squats basically being biker gang thugs!

It's worth getting on the Ramshackle mailing list as Curtis comes out with some great deals. I got the bikes in a "20 for 30" deal he ran where you got 20 items for 30GBP, so the bikes were only 1.50GBP each. Bargain!