For a 7th post last week I painted up more Greeks and 30k Mechanicum.  First up this week are 4 more Castellax Battle-Automata, these ones armed with the much more basic mauler bolt cannon. 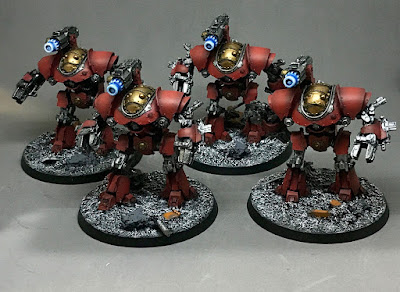 The gun is essentially an upgraded heavy bolter, so not great, but not bad either. 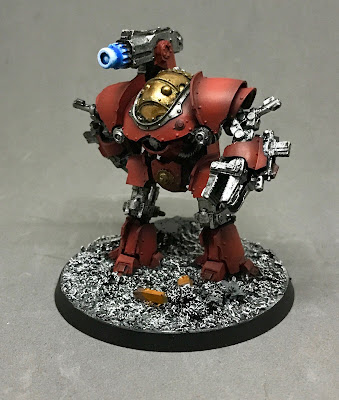 Also painted last week was another unit of 16 Greek hoplites.  Once again these are the very poor Warlord (Immortal) figures, but I have been forcing myself to work through the pile of these before going onto the better Victrix and Foundry figures that have been arriving from various orders, as I don't think I could force myself to come back to these things after working on better figures.

This batch I painted up in white and blue in various patterns and am picturing them as an Athenian unit.  I realize that most units would be more mixed with colours and styles historically, but am choosing to simplify at least a few units so that they look like units and are easy to keep straight on the battle field.  I know, not very historical, but I play more for the look and tactics than any real historical recreation reason, I don't have a burning need or desire to be 100% accurate. 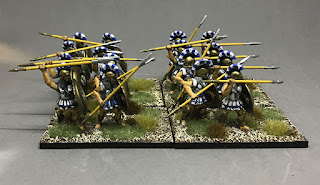 
For the first theme round this year I picked something that I have wanted to paint since I got it almost a year ago, but kept delaying as I was not sure I could do it justice until I had some more practice with my super fine Harder & Steenbeck airbrush.

Well, I've had some practice the last few months with the airbrush so, may I present my take on the Dropfleet Commander UCM Beijing Battleship.  Now, it's not the normal version, this is the kickstarter exclusive all resin 2-up version.  Meaning it is not playable in game, and is bloody huge, measuring a whopping 11"+ long, 5" across, and 4"+ tall! 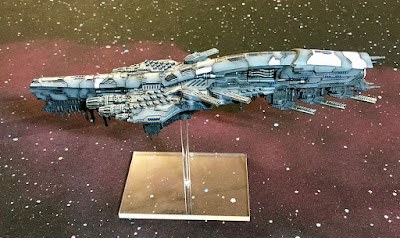 Once the base colours were setup, I went in with a 0.15mm H&S airbrush and worked each upper hull panel up to a lighter grey in the center, careful to leave the edge of each panel dark.  This took a while as I put the lighter colour on as a glaze of probably 1 part paint 4 parts glaze medium and then thinned down and applied with very low pressure. Once all the panels were highlighted, I masked off the ones to be white and gave them a few coats of flat white.

With the airbrush work all done, I went to the bottom of the hull and used a brush to glaze highlights onto each little bump and part.  I didn't want a chalky drybrush look so had to do it this way which was time consuming but simple.  I then clear coated the model for handling and the next step.

With that done I used thinned down black oil paint to create a pin wash.  I did it this way for two reasons.  Firstly, a thinned oil paint wash wicks through the cracks and details 100x better than any wash I have ever used.  Secondly, Greg showed me a great product that is essentially a hardened q-tip used by Japanese mecha modelers, that you dip into thinner after the wash is done and then wipe it over the model.  It cleans up anything that comes out of the details instantly and completely (assuming you clear coated first).  This has made doing models like this far less stressful than using a normal wash.  I don't know that Greg has ever actually used the product himself, but I LOVE it and have used them MANY times to great effect.

After the wash I clear coated again so that the oil paint was sealed away and then went to more detail work.  I added some sparse metal work areas (mainly pipes and pistons) and then painted a few hundred (at least is seems like it) blue lights all over the model.  These were done with a simplified gem pattern of only 4 colours (dark blue, med blue, light blue, white) due to being so damn small.  Of course that hardly shows in the images, so it was not really worth the effort, but oh well. 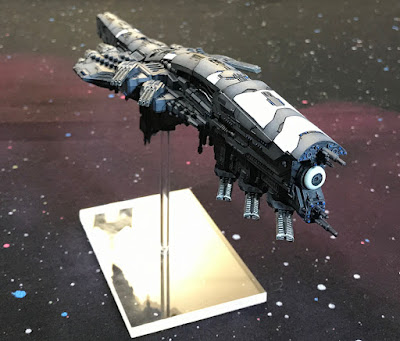 So there you go, a huge spaceship that is not even usable in a game, all done just for fun.  That said, I bloody LOVE the scale and wished they had done more than just the UCM and a PHR ship in this scale.  Surely it isn't just me that thinks that it would be amazing to do a fleet battle on a gym floor with ships like this!

Oh, and just for comparison, the small ship in the last picture is a normal DFC ship that is 4" long on a 50mm base. 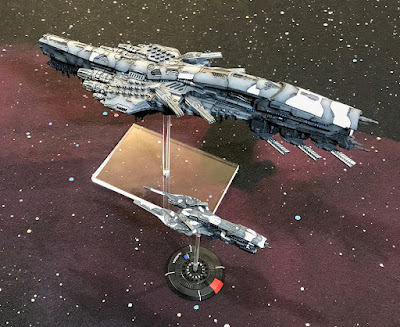 All the work was well worth it on this model, as I ended up winning the Theme week with the most votes!  A pretty damn good way to start the theme challenges off!

What brand of "thinned oil paint wash" did you use? I've been looking to get some for a while, but have no leads on what to buy (I'm pretty disappointed with normal washes for spaceships).

I literally used just that "thinned oil paint". It was a W&N middle tier oil paint (there are 3 levels of oil paint by them and the cheap is garbage, the high end is $$$ and not really needed for this) and then used probably 1 part paint 10-20 parts odorless thinner. The trick really is the ability to clean it up with those awesome Gainotes G-06 finish master q-tip like things, makes the wash super clean as you use thinner to clean up anything that comes out of the details.