I promised myself that this year I wouldn't fall behind in keeping up the cross posting to my home blog here for the painting challenge, but have once again fell behind anyway. So, time to catch up with everything...

The 4th entry I put in this year was more 30k Death Guard to expand my force so that I can contribute more to our groups rather large number of 30k battles that rage at least monthly. 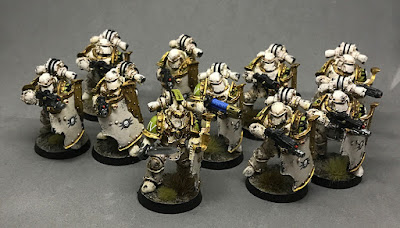 I have a pile of figures to get done for the 30k version of the Death Guard this year, including several transports as my force so far has been almost exclusively foot based with little mobility.  However, before getting onto that, I needed to get some more infantry done (mainly due to the fact that I want to do all the vehicles at once and ran out of chipping solution so am waiting for it to arrive).
My 5th entry was a continuation of my Greek project, with another unit of Warlord (Immortal) Greeks, as well as a command stand of Spartans. 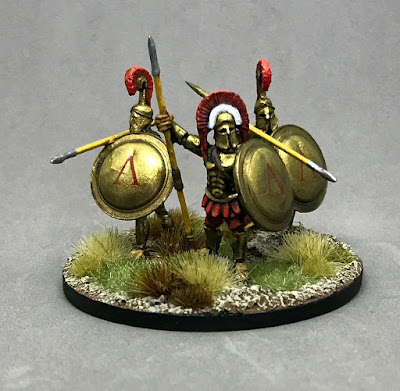 The command stand is made up of a pack of metal Spartans from Warlord and the quality is much better than the plastics.  Even though they still managed to get the arms wrong.  The arms are once again in a throwing motion, rather than an arm over spear for thrusting motion.  Oh well...  since I am painting a lot of the figures that have leather armour as if they had bronze armour, I probably shouldn't complain that much about things that most people wouldn't notice anyway.

I spent a lot more time on these, doing more blending and more highlights, which don't really show up in the pictures, but show up in person.  My thought being that the command stands will be looked at closer than the mass infantry units and should therefore get a bit more attention. 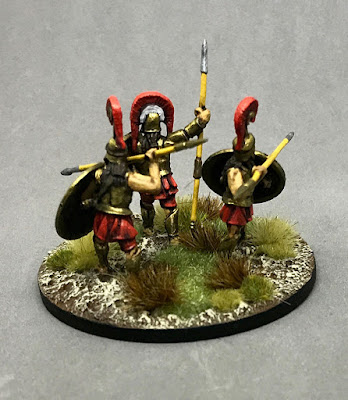 I then moved onto a second unit of Greeks, that are un-armoured. 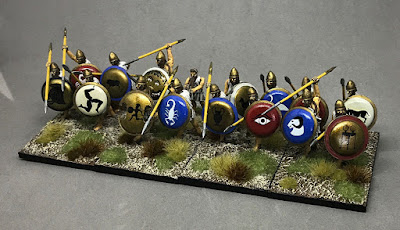 Once again since they are meant for mass effect on the tabletop, they got a fairly basic treatment.  I blocked in colours, washed, then highlighted.  I then went over the shields and painted various colours and then applied decals.  After that is was a simple matter of basing them and they were done.  Not fancy but effective I think. 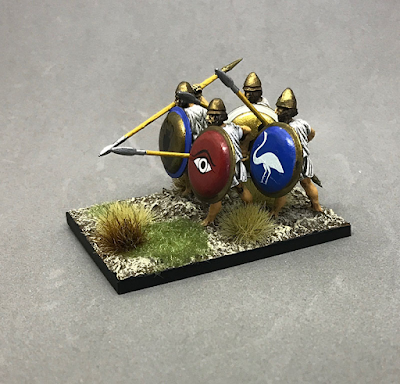 My sixth submission was more Castellax Class Battle-Automata and a transport for my 30k Death Guard. The Castellax were armed with multi-meltas, flamers, and close combat saw blades this time around. 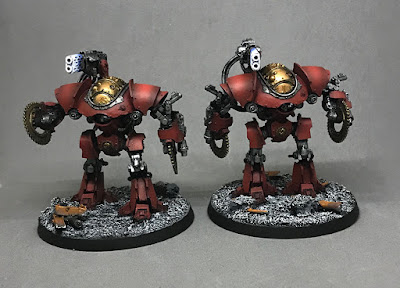 The bases are hand made using liquitex, cork board, cut up sprue, guitar wire, and copper pipe bits.  I tried to give them an urban rubble look without going overboard as I find a lot of cast resin rubble bases have too much on them and you wonder how the hell the model is moving through it. 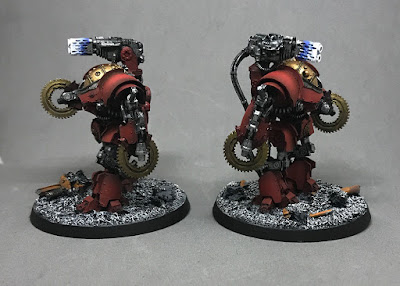 I also kept with the blue glow as a colour accent to keep in theme with the last batch, even though I tend to think of melta as a red/orange glow.  My thought being that it just would look like more of the same base red armour colour if I did that. 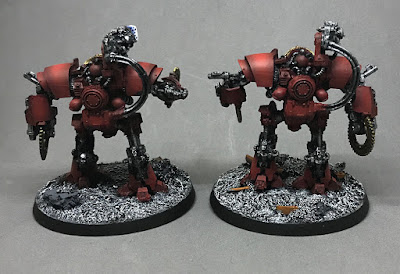 Next up is a Death Guard Anvillus pattern drop pod that I had started doing up for this weeks "flight" theme just in case I didn't get the piece that I really wanted to get done completed.  I did though, so here is the drop pod as a regular submission. The drop pod was painted the same way I have been doing all of my Death Guard vehicles, making heavy use of Mig products.  I base coated it black, applied chipping solution, painted the off white colour with an airbrush and then once dry wet it with water and started chipping the paint off.  It gives a completely random and organic look to it, you just have to give up control though as you can go light or hard on the brushing to control it a bit, but sometimes it just comes off in big sections and sometimes it sticks and you can't get any chips, so you just go with it.  I then apply decals and clear coat it, then come back with Mig streaking products and oil brushers and make it a mess with multiple different browns, blacks, and rust colours.  Apply a bit of each, let set for a bit, then use thinner or white spirits to spread it around and cause the streaks, or to clean up areas that got to much. 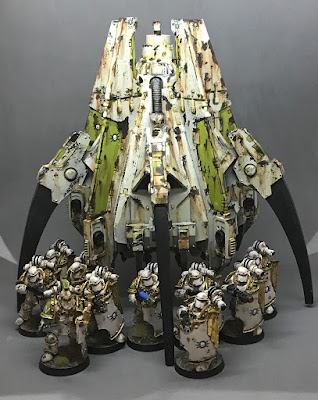 There we go, a whole pile of stuff off my painting shelf, but I already have it filling up again as stuff comes in to replace it.
Posted by ByronM at 2:51 PM