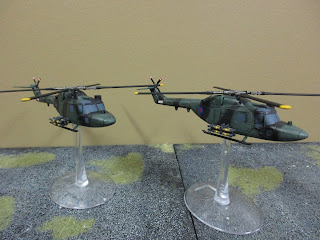 The latest Team Yankee escalation involves the British. Conscript Greg very kindly presented me with the infantry component of a British mechanised platoon for Christmas, knowing that I intended to fire up a troop of Chieftains. So I've now completed painting the infantry (see below) but wanted to add an aerial component to the small force as well. Enter the Westland Lynx helicopters. 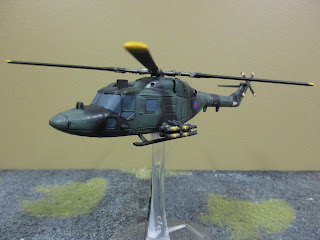 Battlefront sells a great kit. The box contains two models, which can be built as either "Helarm" (TOW missiles in racks on either side of the fuselage, shown above) or the unarmed "transport" variants. 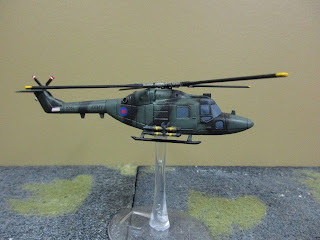 It's a good-looking helicopter! Rotors are one-piece and attach to the body with rare-earth magnets supplied in the box. I painted the helicopters in the same colours as the Chieftains - primed black, all over Catachan Green, then camo stripes of Abaddon Black mixed with a skosh of Mechanicus Standard Grey, then Vallejo German Uniform for the lighter green bits. Follow with a wash of Nuln Oil. Missile racks were drybrushed with MSG for highlights, and the tubes painted Steel Legion Drab. 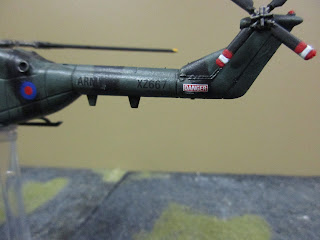 Decals come in the box as well. Strangely, the models used in Battlefront's own propaganda shots (box front and in the Iron Maiden "codex") don't have applied decals. I had to search out the proper placement on the Internet (I know, wah wah wah) 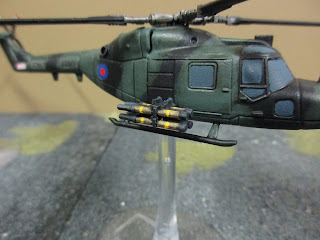 Close-up of the TOW missile rack. Being indecisive and cheap, and wanting maximum flexibility out of the kits... 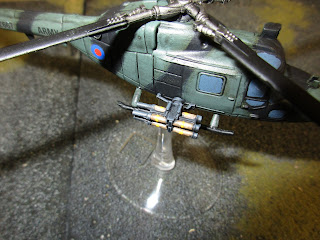 ...I magnetised them! You can see the disc-shaped neo-dymium magnet in the picture above, directly inboard of the centre support of the missile rack, between the two supporting "legs".

This magnet adheres to a disc magnet superglued in the appropriate position inside the fuselage, on either side, before assembly. With magnets attached to the missile racks, they can be clipped on and off as you please. Just make sure to use magnets that are strong enough to grip each other through the plastic hull. The missile rack assembly is very light so it doesn't take much of a magnet to do the job. 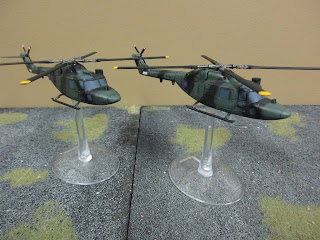 Presto - just remove the missile racks and you have the "transport" variant. 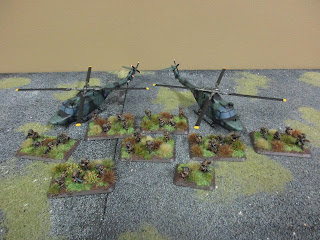 Now on to the infantry - the mechanised platoon comes with seven large stands and one small one for the two-inch mortar. 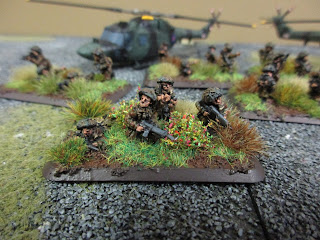 Here's the platoon commander, identified by flowers on the base. 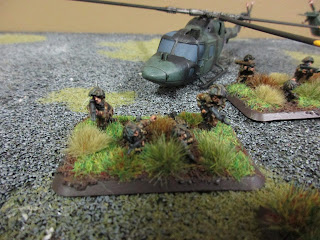 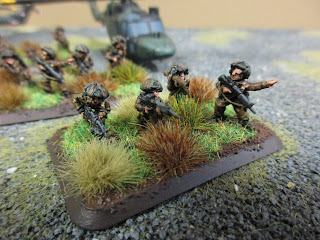 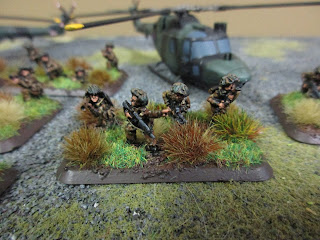 I love the poses and sculpts of the Battlefront infantry but just wish that the casting was better. There are still a few slipped molds and mangled faces/weapons in the lot. 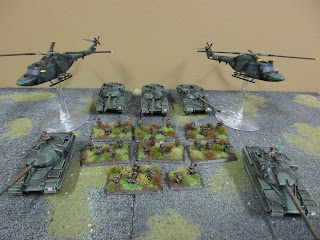 Here's the British contingent so far. Next up will be sourcing some FV432s for the mech platoon, and maybe getting some guys with MILAN ATGWs, but I don't see the British force growing much beyond that. It's intended to be an allied contingent for the West Germans in "narrative" games and will do fine in that role.
Posted by Dallas at 11:38 AM

Thanks guys! The helos were great fun to paint, I did them in one evening. The infantry took a bit longer than that but the basing was the fun part with them.