Last week, Greg had a great idea - Napoleonics. We haven't rolled out any of our 15mm collections for some time, and the arrival of a fancy new "warmat" from Barrage Miniatures provided the perfect opportunity.

Greg came up with an interesting scenario for us to play, using the Black Powder rules:

“It is 1809 and the War of the Fifth Coalition.  The Austrians are on the move against the French, but Napoleon and his Marshals are rallying their forces to seize the initiative.  We’ll play “Black Powder” with a scenario featuring a rear-guard confrontation near Landshut in Bavaria. Austrian General Hiller is falling back, but turns to defend against Marshal Lannes’ pursuit.  Will he hold the French back?” 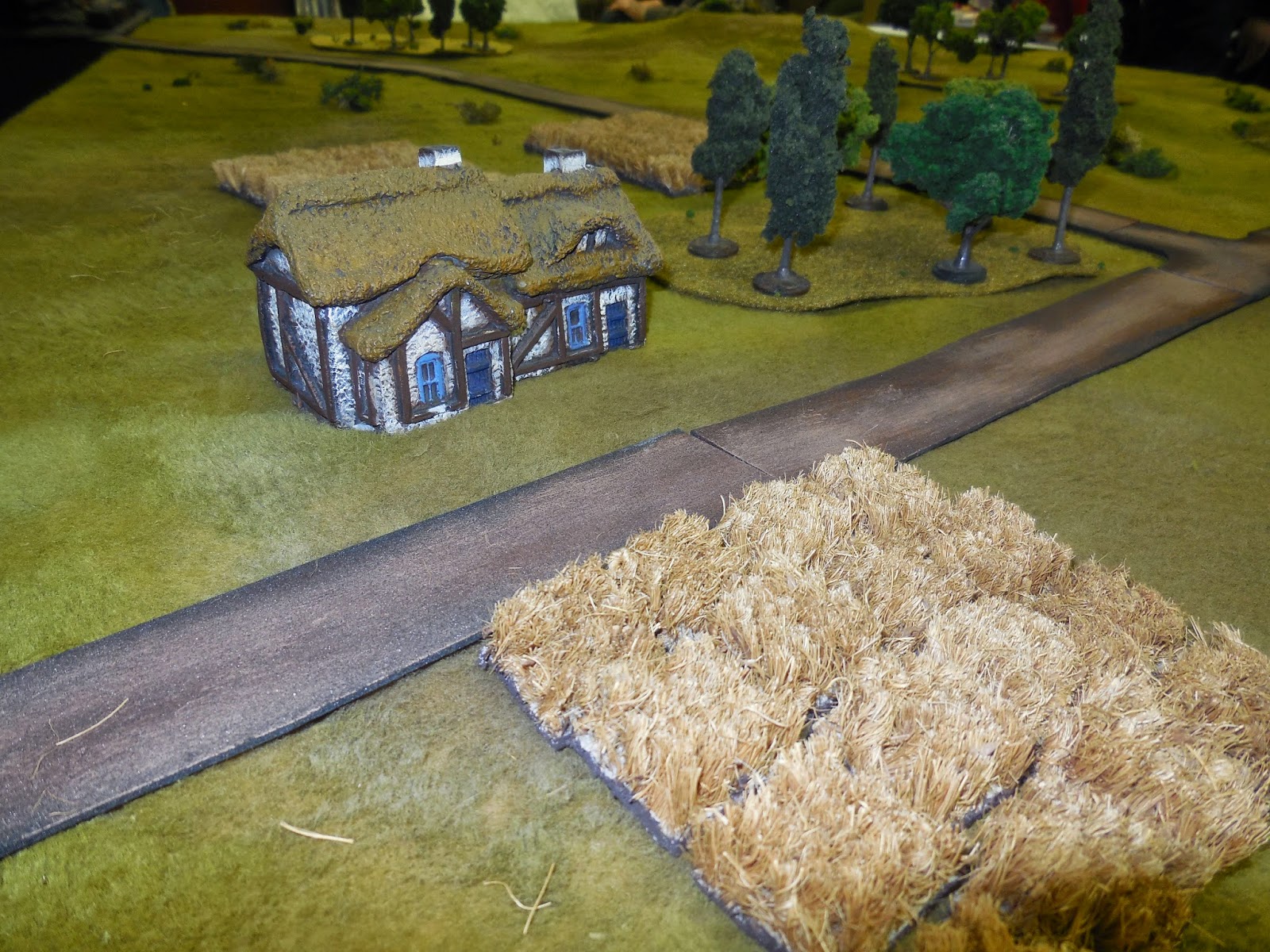 As much as I was looking forward to pushing around some great-looking 15mm Napoleonics, I was also eager to start amortizing some new terrain. With encouragement from Conscript Curt, I ordered a warmat from Curt's pal Alf at Barrage Miniatures in Madrid, Spain. I'll be posting a review on the blog later, but suffice to say that Barrage was great to deal with and kept me well updated on progress (the mats are apparently quite labour-intensive to produce). The mat was certainly expensive but it's very high quality and as you can see from the photos, it looks great and elicited lots of comments from the guys. 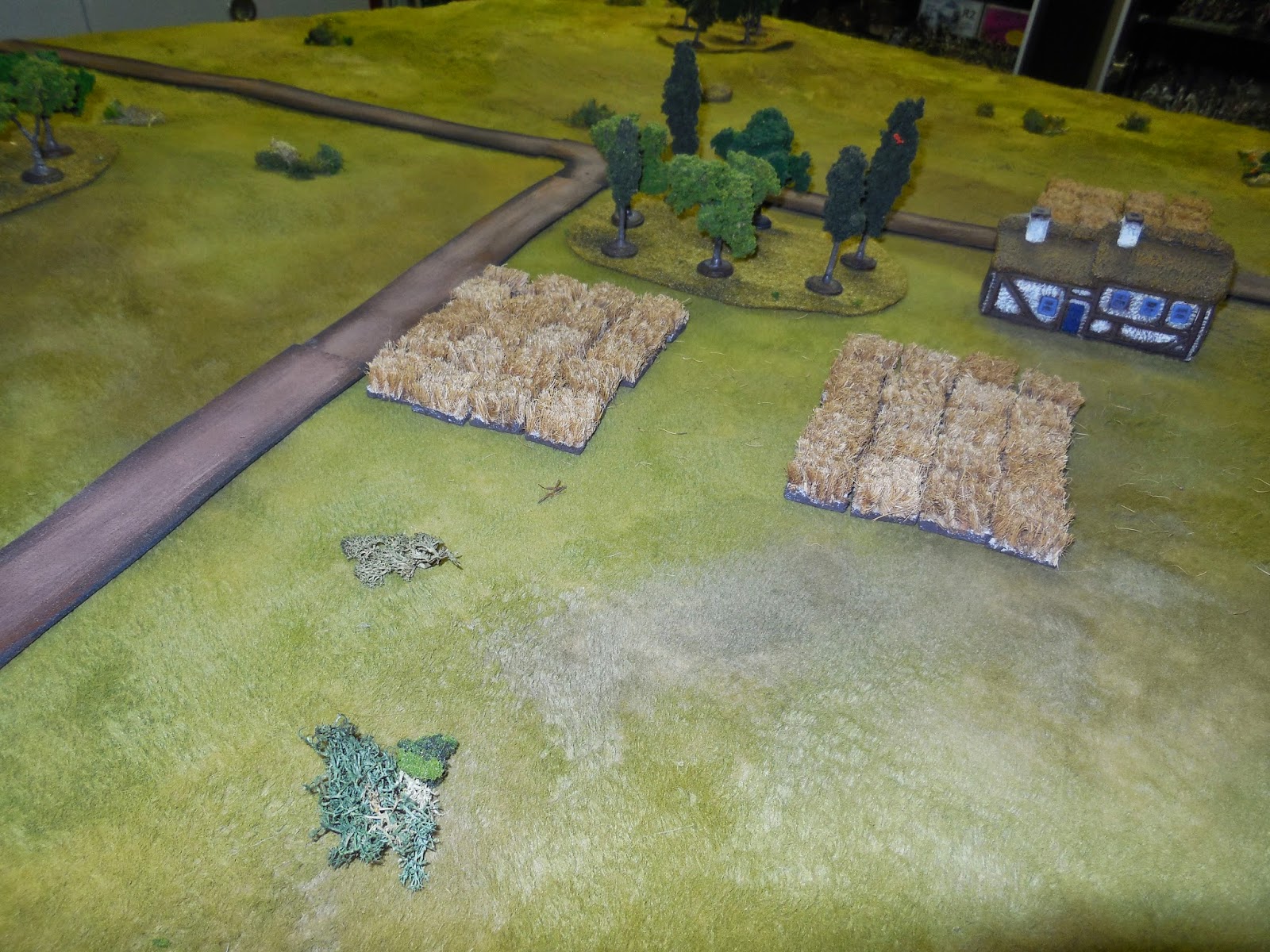 We also used the new "wheatfield" terrain I've been making, using an idea I stole from some chaps at Legio-Con. It's a sisal mat from IKEA cut into 1" squares and makes great looking fields for 15mm or 28mm! 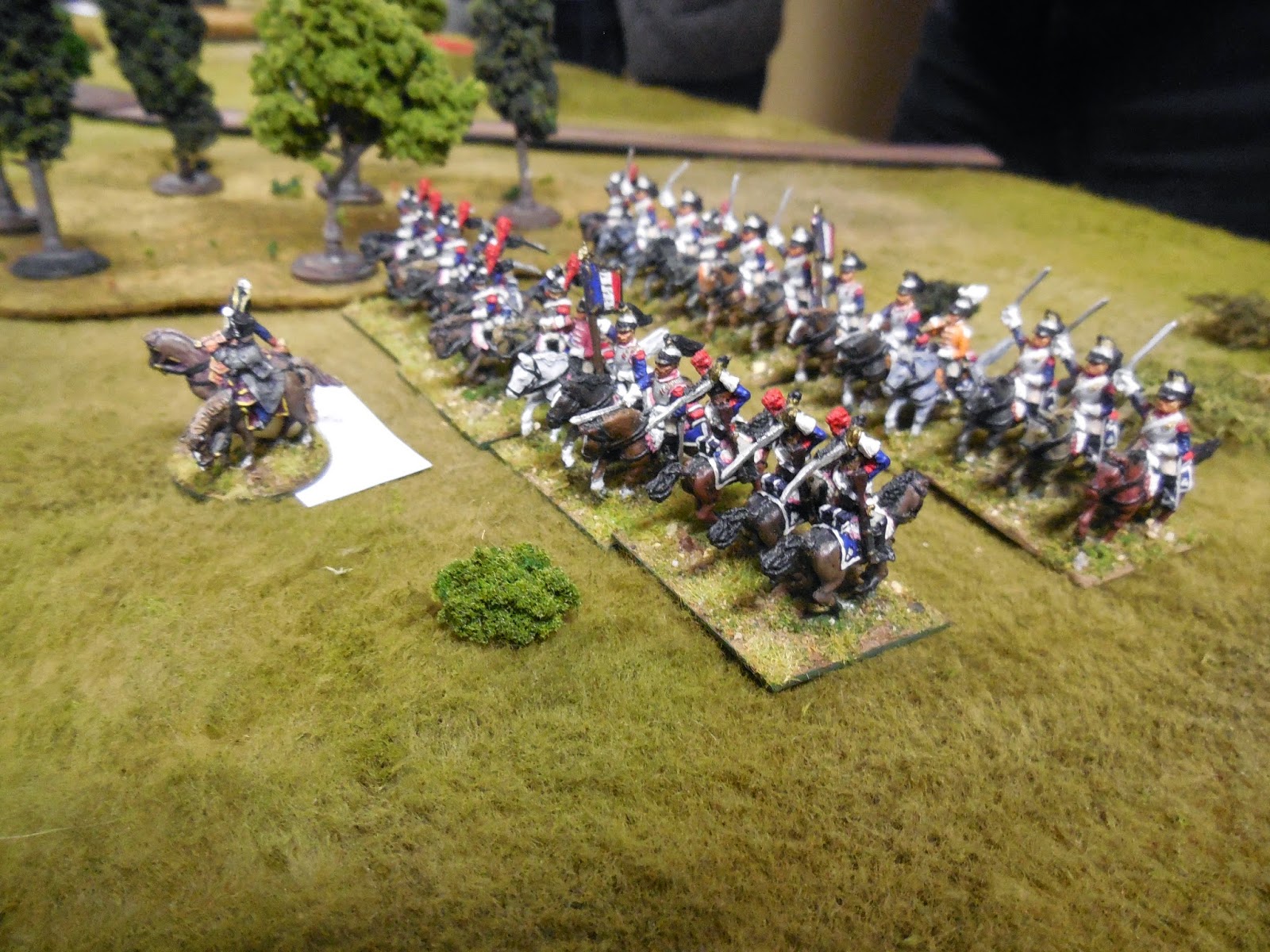 Conscript Frederick took command of the French heavy cavalry brigade. They deployed on the French left and aimed to sweep around the Austrian flank and hit them from behind. 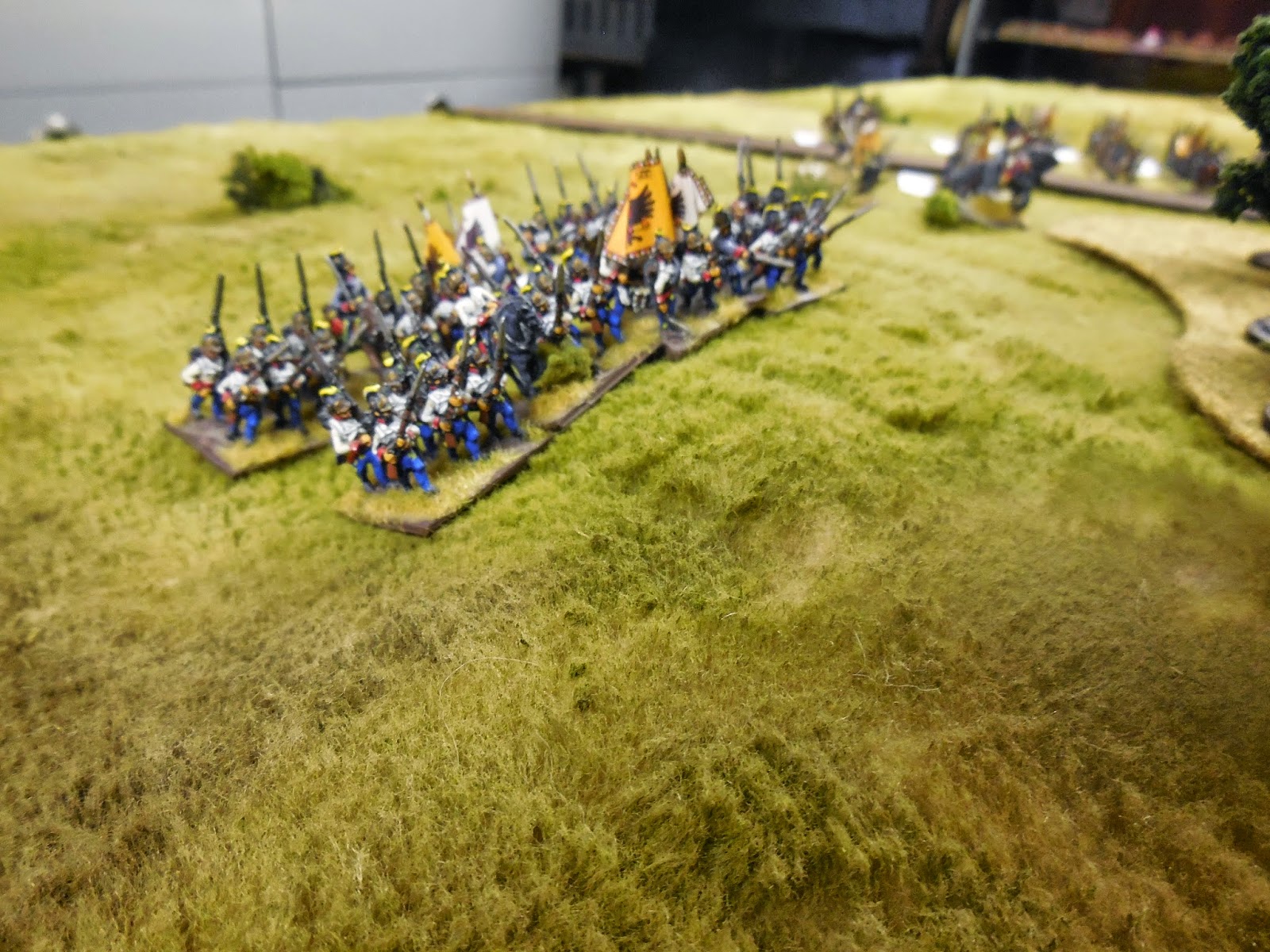 Conscripts Dave, Kevin and Bill took the Austrian commands. They deployed a weaker brigade on their right (facing Frederick's cavalry) with the main strong infantry brigade in their centre (just visible in the background of the photo above). The Austrians kept their cavalry brigade and a battalion of Guards infantry in reserve. 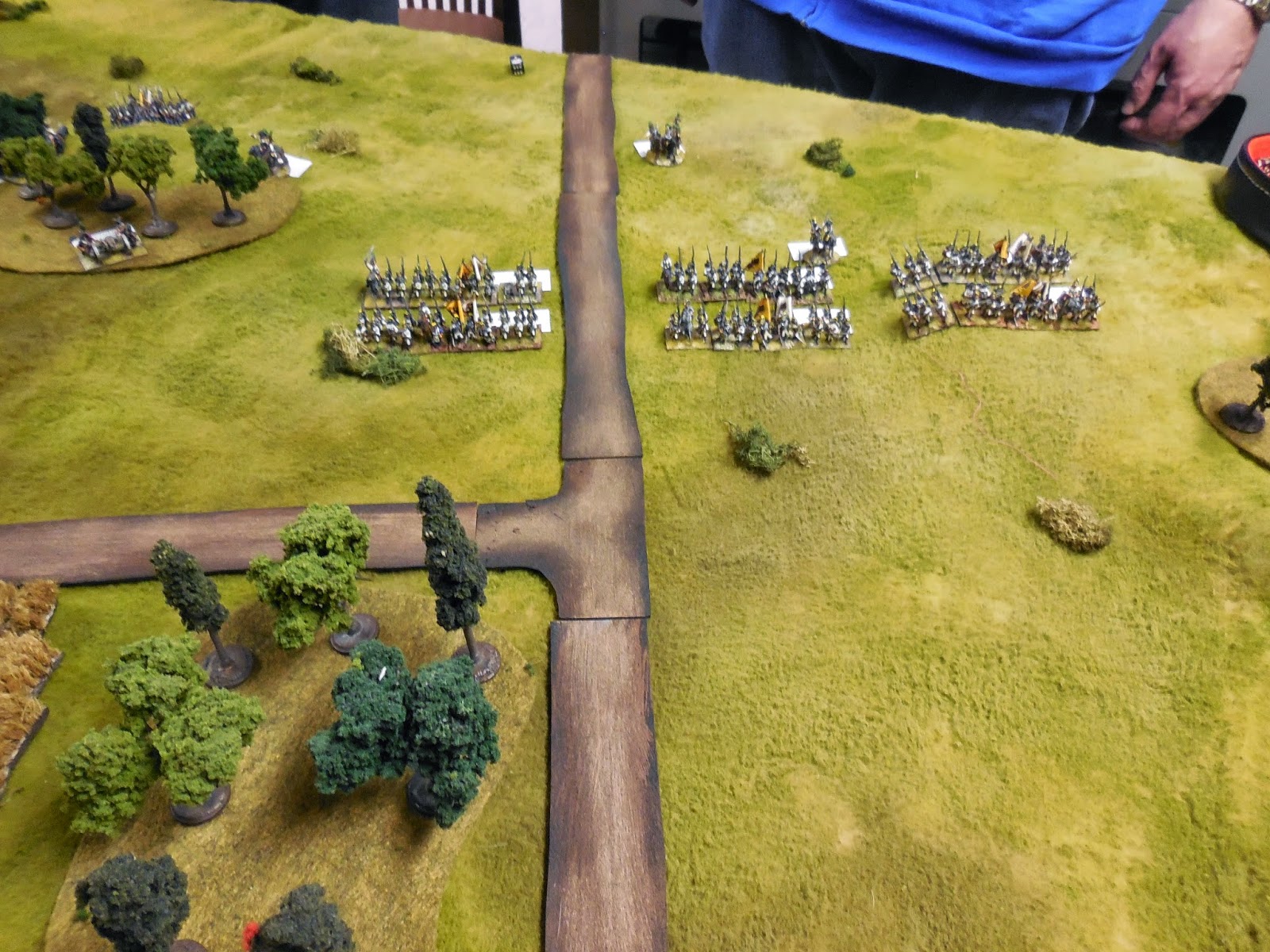 Helicopter view of the Austrian position, viewed from the French side. They placed a gun in the woods at top left. 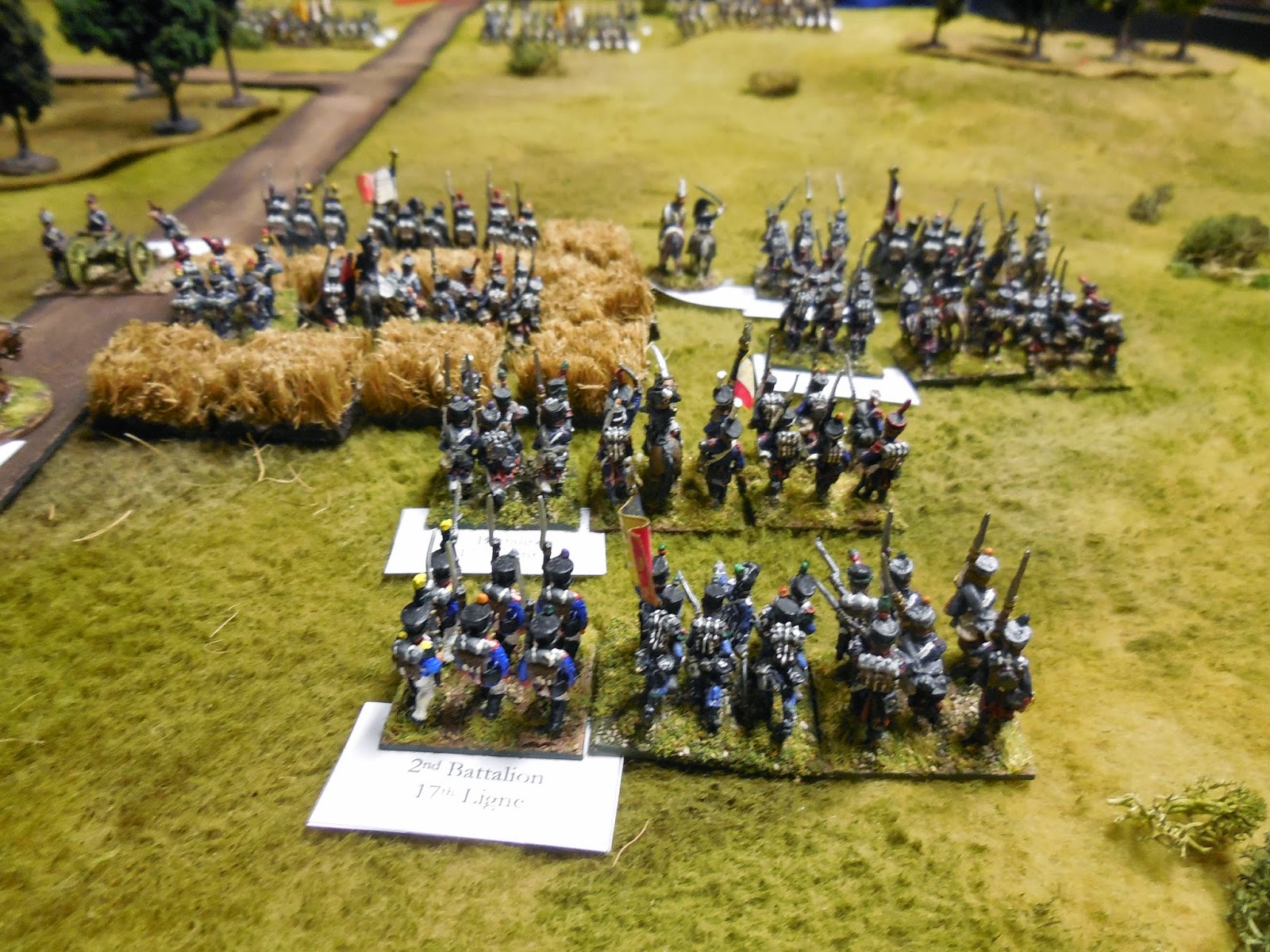 Here come the French! We deployed our strong infantry brigade directly opposite the strong Austrian position, the idea being that we would pin the sausage-eaters in place while Frederick's cavalry swept around. Conscript Keegan took the weaker infantry brigade up the French left, just to the right of the cavalry. Check out the infantry moving through the fields - neat effect, eh? 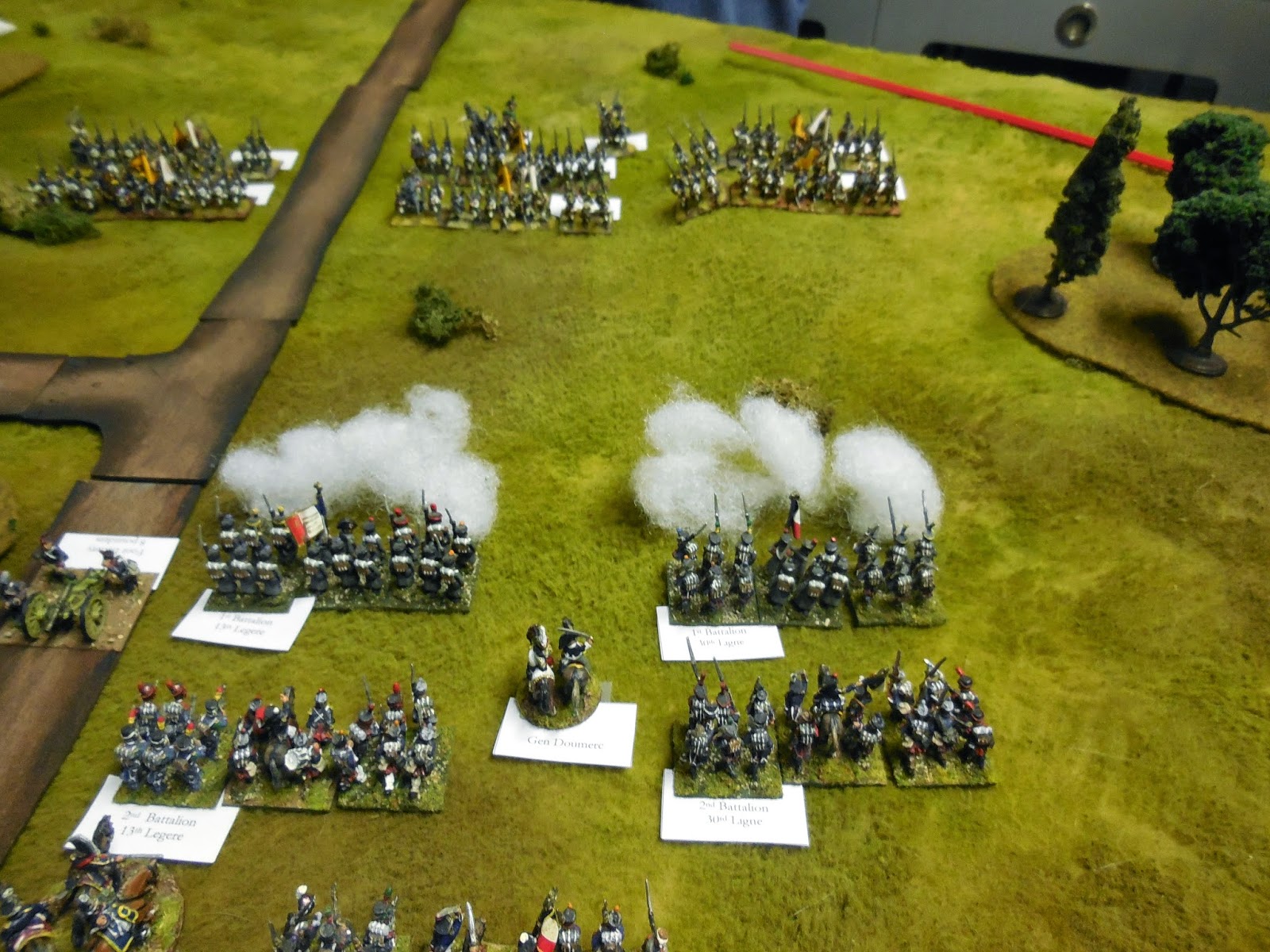 Battle is joined as the French engage with musketry. 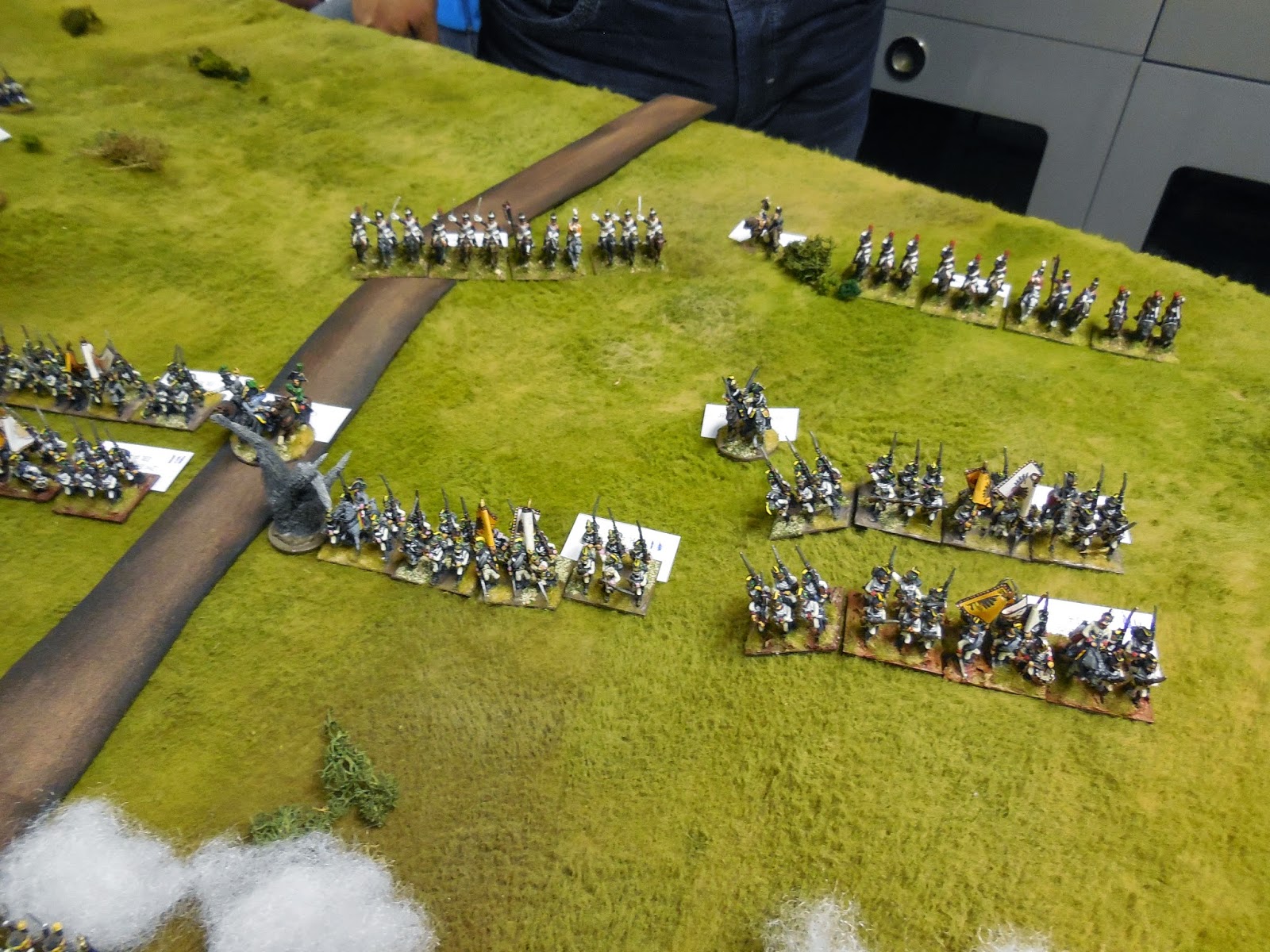 "Was is los???" The French cavalry sweep around and end up behind the Austrian lines. One of the French regiments has already zapped an Austrian battalion in the centre of their line, and bounced back behind the hill. (This was a bit of a snafu with our understanding of Black Powder, as the victorious French should have been allowed to sweep into the next Austrian battalion. However I personally think that the balance of the game as a whole benefited from this misunderstanding, as the French cav had been rocket-like in their flank march.) 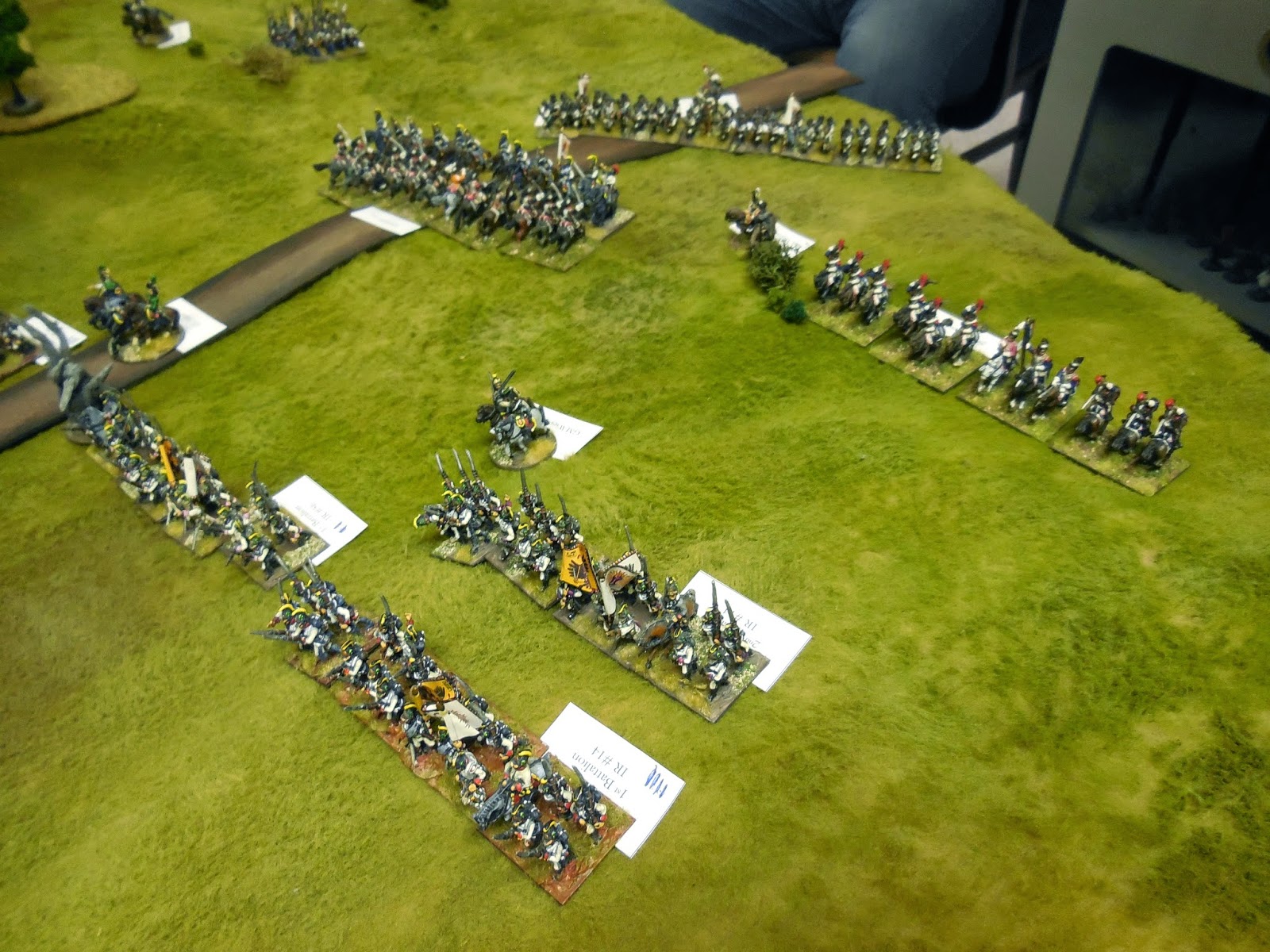 Anyway, the Austrian arrived from reserve and their cavalry charged in on the French - heavy on heavy - while the Guards infantry lined up their muskets on the other French cav regiment. 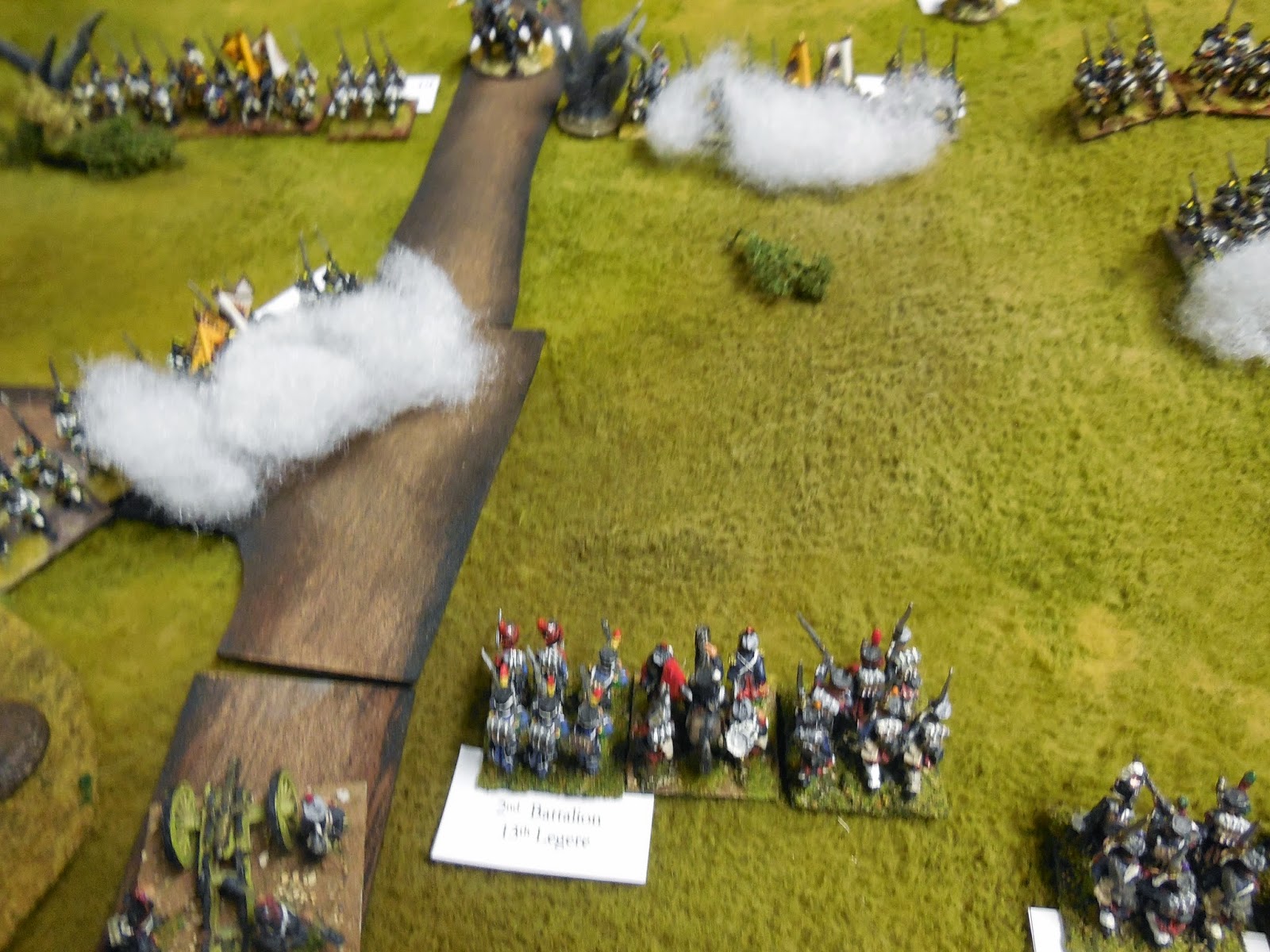 Meanwhile, the French infantry continued to advance under heavy fire from the Austrian foot-sloggers. 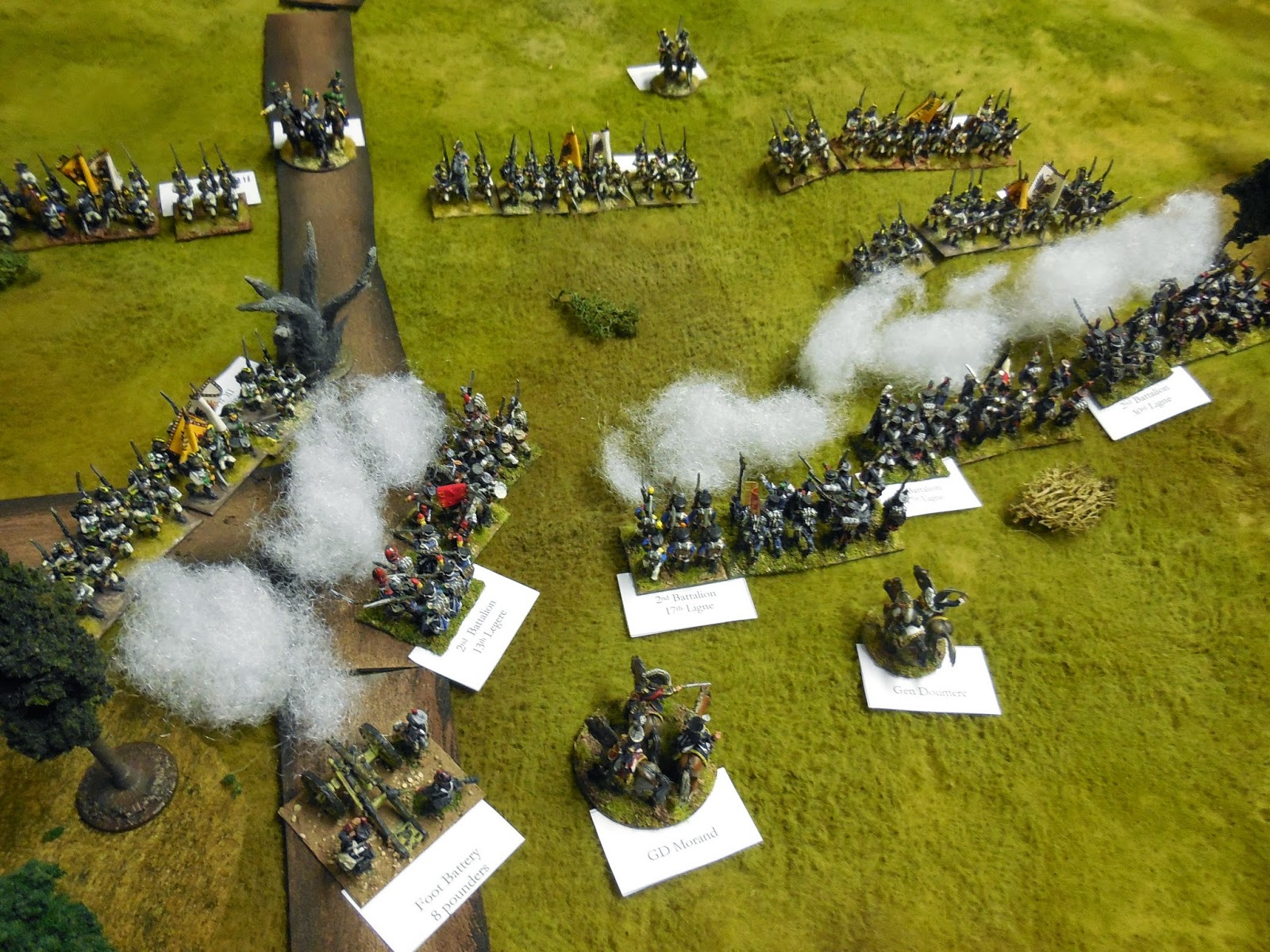 The French have lost two battalions to shooting at this point and have to turn one to the left to refuse the Austrian flank pressure. 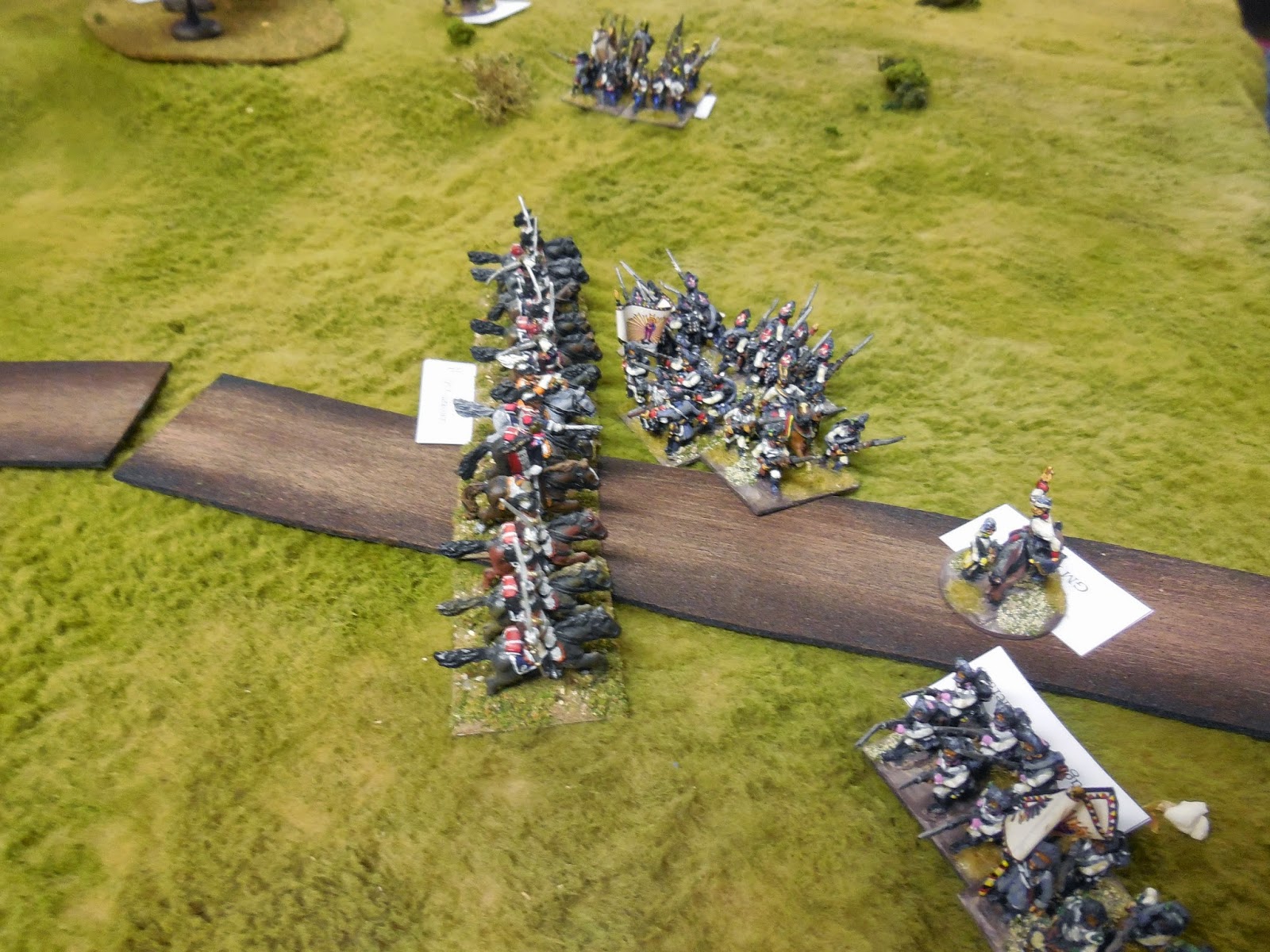 French cavalry have driven off their Austrian counterparts and are about to bounce off an Austrian square. Another slight miscue on our part - cavalry are not allowed to charge home on a square in good order... 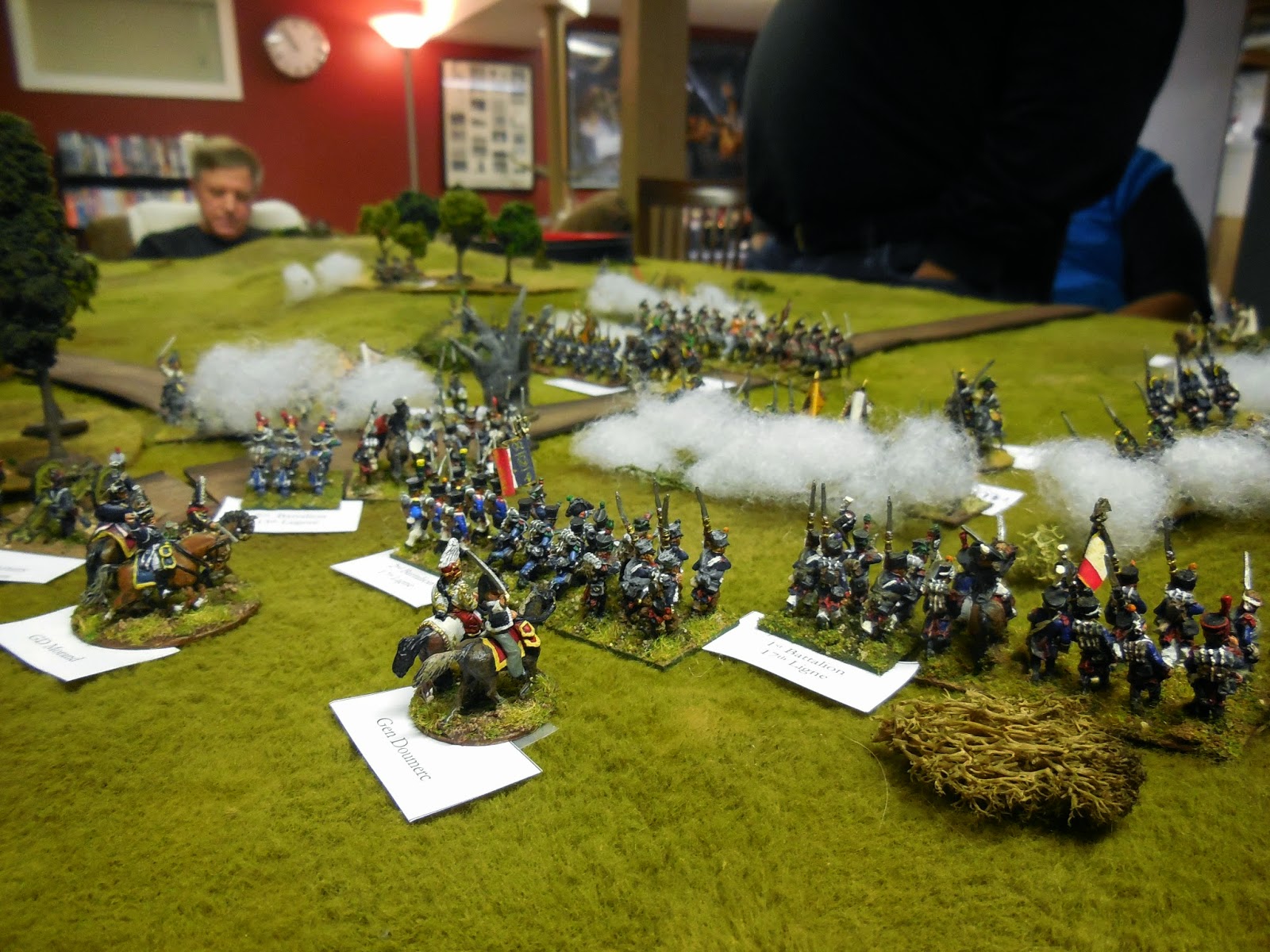 A nice view of the fracas unfolding. 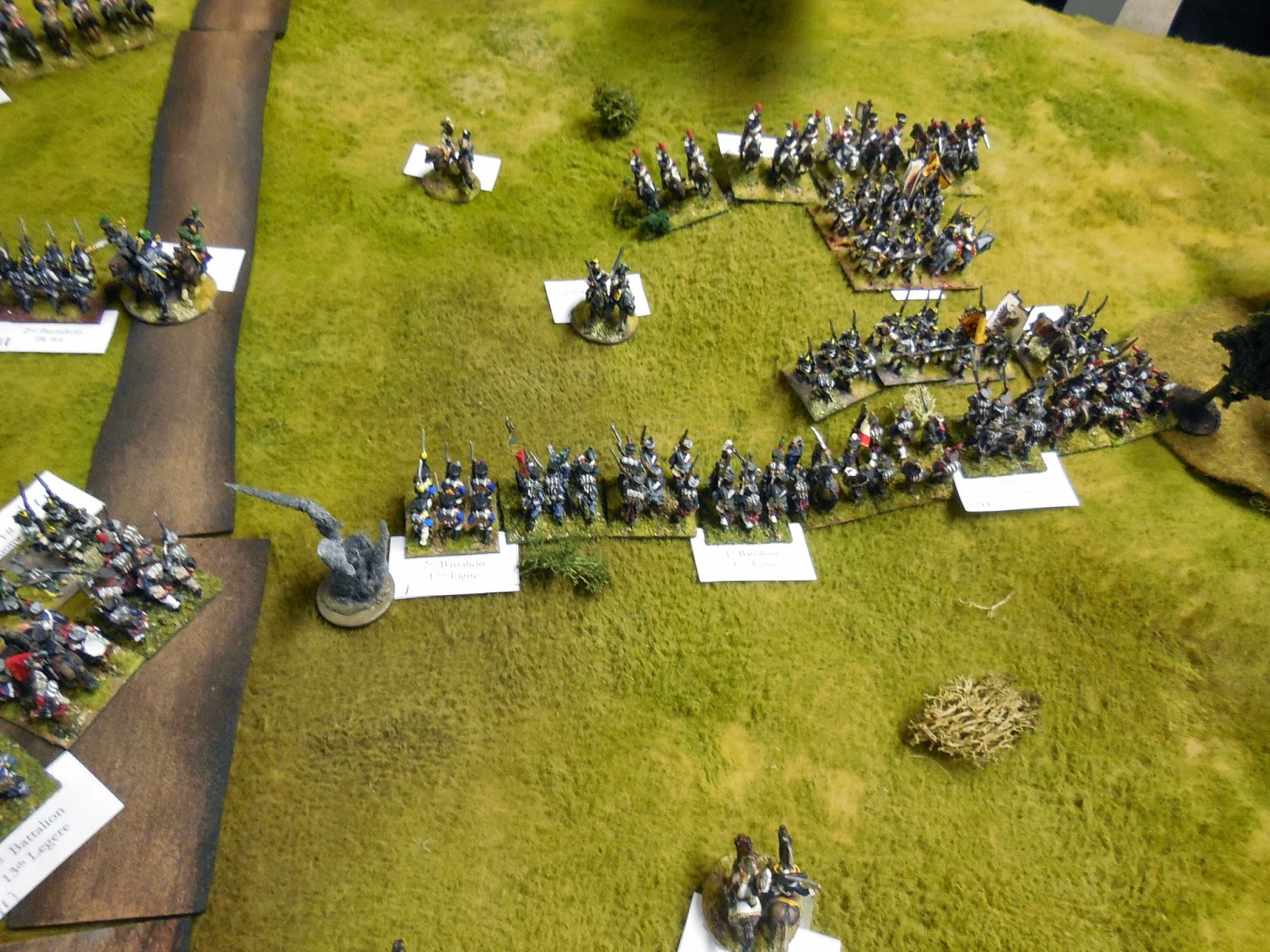 The Austrians are starting to really buckle under pressure from both directions. 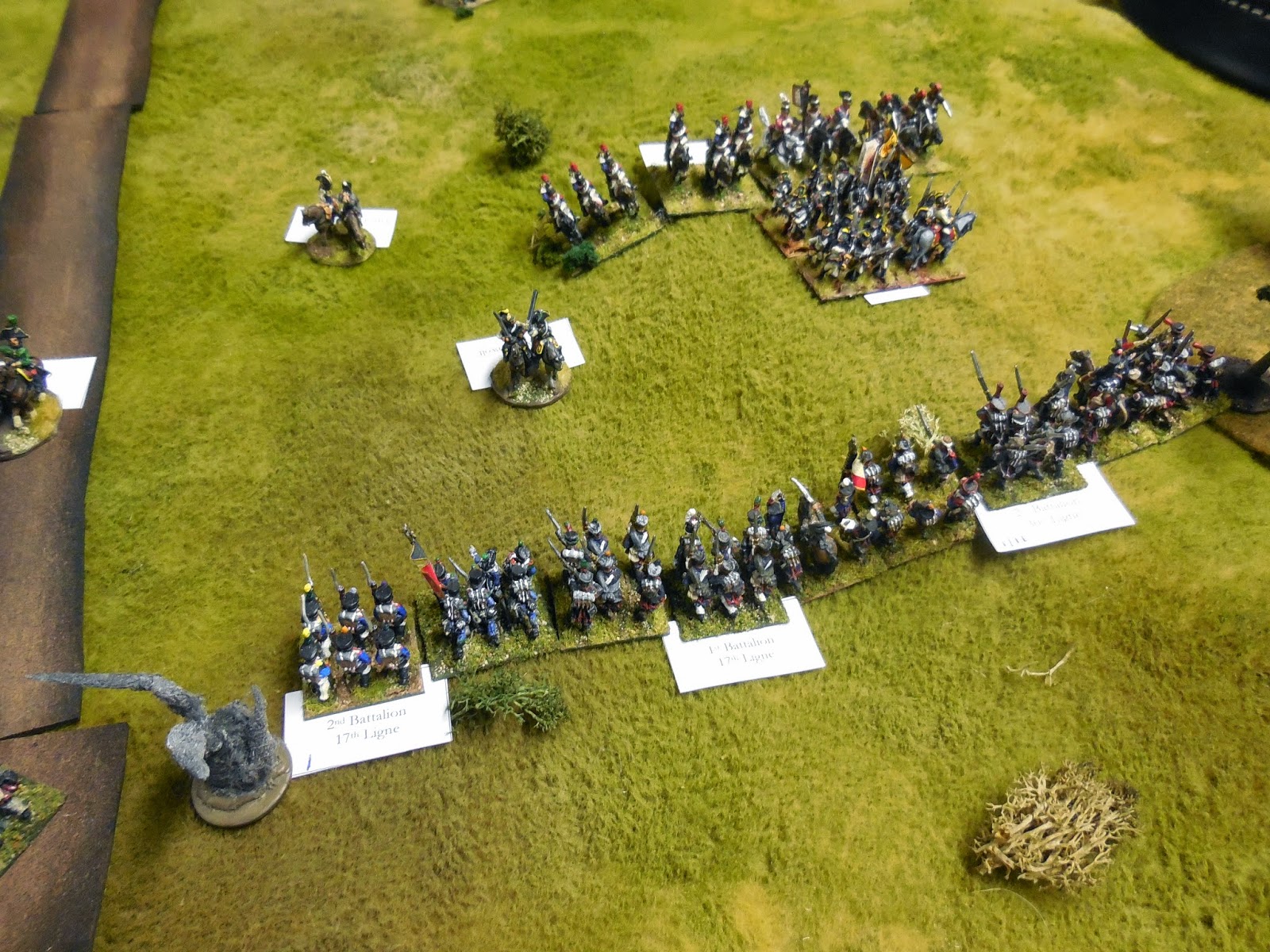 Austrian battalion on the French left is eliminated in close combat while their colleagues behind are forced to form square. 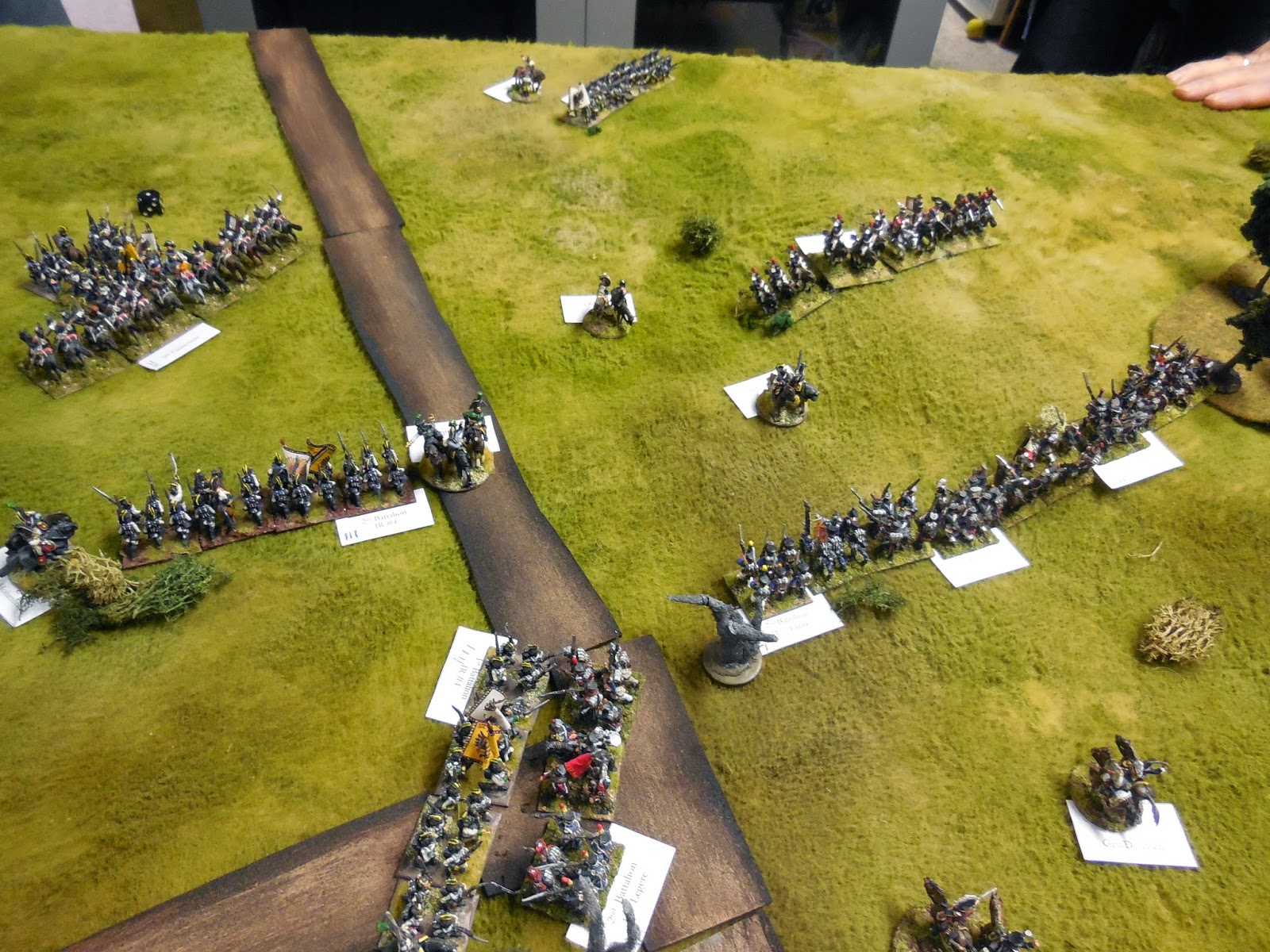 The end... Too many Austrian casualties to allow them to continue the battle. French victory.

Thoughts... Black Powder is good fun and the battle rattled right along. However, the elastic time scale of battle, with the potential for multiple actions by one unit in a turn, had a real effect on the game. The French heavy cavalry brigade got some good command checks and was all the way around the flank and in the Austrian rear in about three turns. Although some minor rules snafus evened things up a bit, that really put paid to the game for the sausage-eaters as the French vise grip tightened. Even with that, though, the game was great fun and looked fantastic with the new warmat and Greg's exquisite figures.
Posted by Dallas at 2:09 PM