I did not get into the Kickstarter when Sedition Wars was first offered. So, some of the Kickstarter-only rewards have been hard to find. I was able to buy on eBay a few "Opticamo" Vanguard Samaritans and heroes - think thermo-optic camouflage from Ghost in the Shell.

These are clear resin models, to represent when a figure has been thusly cloaked. In game terms, this costs a Tactic from the Tactics Pool every turn to place the model in Opticamo Mode, but allows the model to activate without triggering enemy Reflex actions, treats the model as if in cover for enemy abilities that rely on visibility, and grants the model a negative modifier to be attacked!

I just finished an Opticamo version of Operator Akosha Nama. It was slightly easier to clean up than the original restic model. I used both super glue and 5-minute epoxy for assembly. Its stock frosty surface looks better, in my opinion, than the clear gloss finish that I have seen used for other clear resin figs. 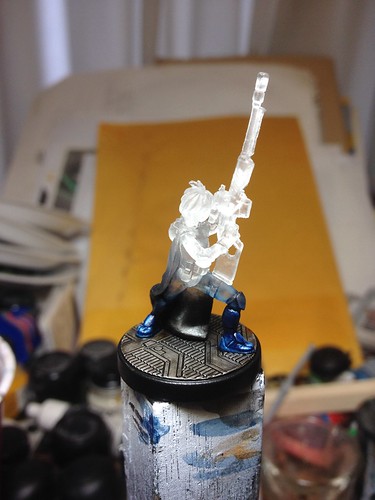 I airbrushed zenithal highlights on the lower portion of the figure, using Vallejo Black and White surface primers.  I then laid in thin  glazes of GW Asurmen Blue for her boots and jumpsuit, and glazed both her smock and base with Badab Black. The paintjob also hides the pin I used affixing the figure to its base. The resulting effect simulates Akosha activating her camouflage.

For comparison, here is a photo of the original figure I painted some months ago. 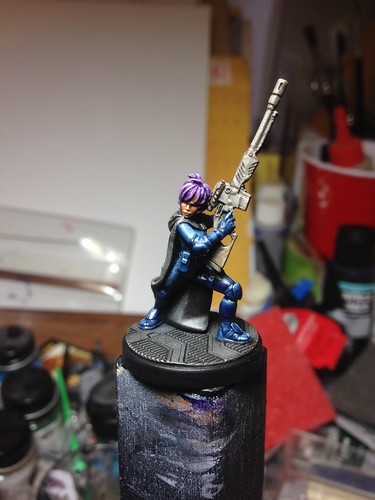 I wanted something other than just a ghostly figure on the table, and I think the effect works out OK.

There's at least one fan-made Sedition Wars scenario out there pitting a lone Opticamo Akosha against a horde of enemies...

Edited to Add: A solo Akosha scenario, "Cocci", is located here.
Posted by DaveV at 1:17 PM

Really nice work Dave. I have seen a few done like this, and the effect is really nice. I think you need colour on the figure to make it show. I may have gone a little higher up, but then again, I am not sure I would have been brave enough to AIRBRUSH a clear fig that I wanted to stay clear! Good work, and maybe more importantly BRAVE work!

I still have to look up what "zenithal" means, but that is a super cool effect Dave. Well done.

Byron, I affixed painter's tape in a downwards cone attached to her gun to create a soft edge mask. The distance between the tape edge and the figure's surface allowed a nice, diffused edge to the spray painted area.

Greg, it just means that I first primed black, then sprayed white in a downwards direction (around 30 degrees off from vertical), simulating where the Sun's light would hit the figure. The resulting greyscale underpainting shines through the thin, multiple glazes.

I really like that effect on her. Makes me wonder how using translucent paints could add to it too.

I've got an article on them here, because it's neat to be able to paint but allow light through: