A Tour of the Trenches - 28mm Terrain Boards 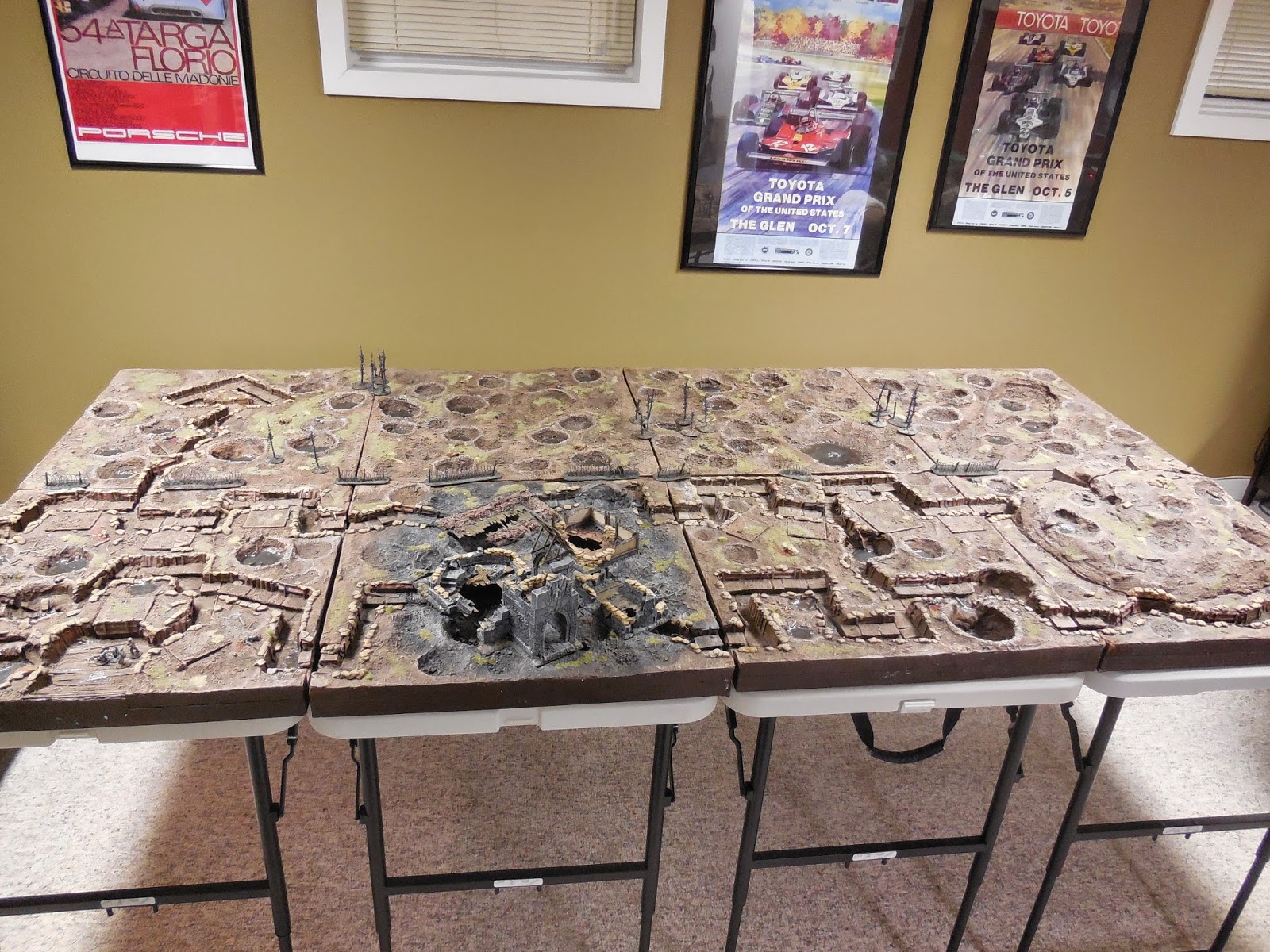 A few weeks ago I was fortunate to win an auction for an 8x4 modular terrain board setup being sold by a Quebec gamer who was "getting out of" Great War gaming. Being as I'm currently on a Great War kick (who isn't) I found it too good a deal to pass up. I am extremely impressed with his work on the setup and I wanted to post a brief "tour" - although I am sure that regular readers will see them not-infrequently in future Fawcett battle reports! 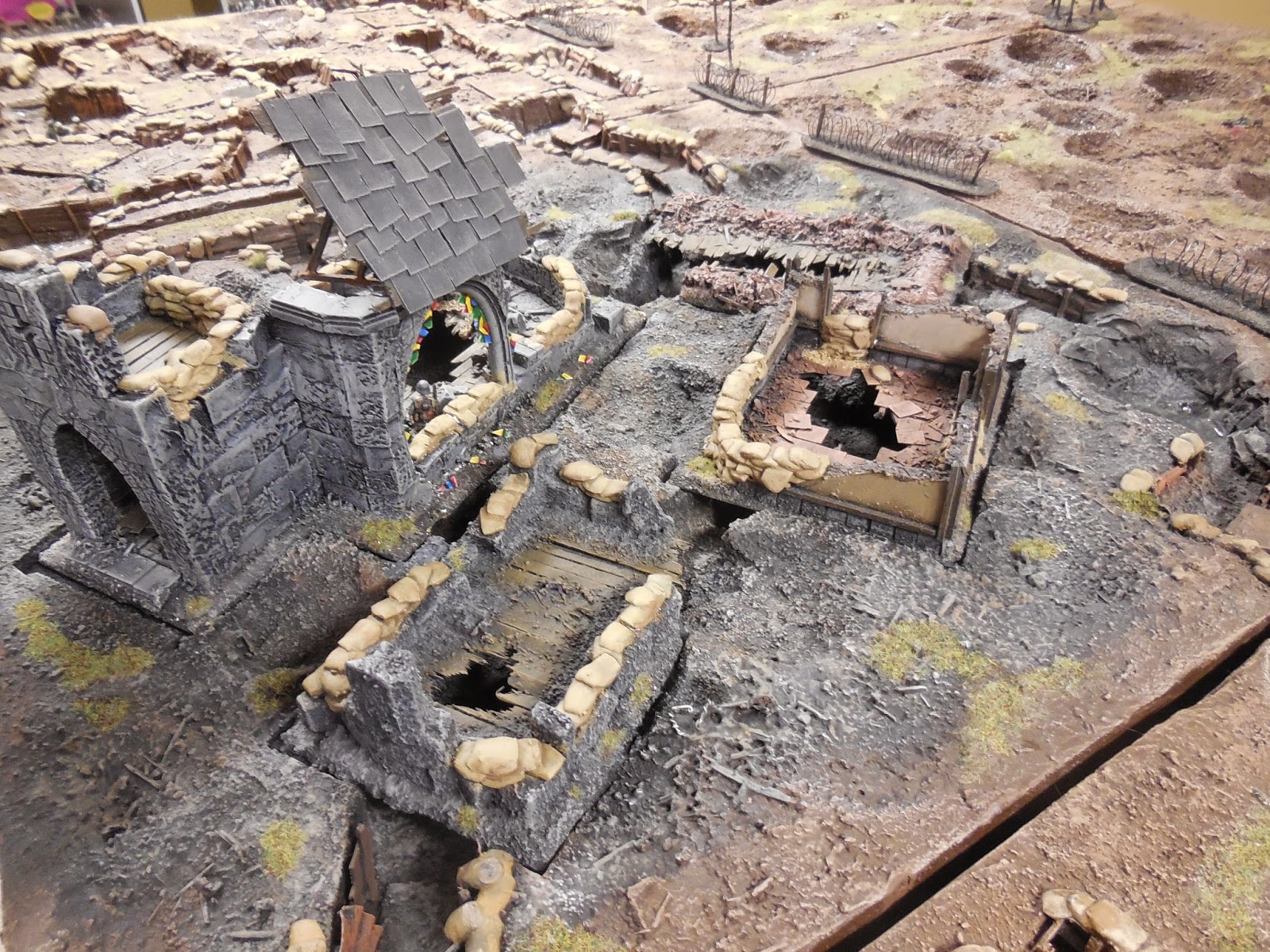 One of the 2x2 boards represents a ruined and fortified church and outbuildings. The building bases are removable, and are all quite sturdy - the walls appear to be made of cast material, probably Hirst Arts or similar. The boards themselves are made of two 1" thick foam insulation boards glued together and based on MDF, with trenches and other features carved out. Sandbags and such are plaster. 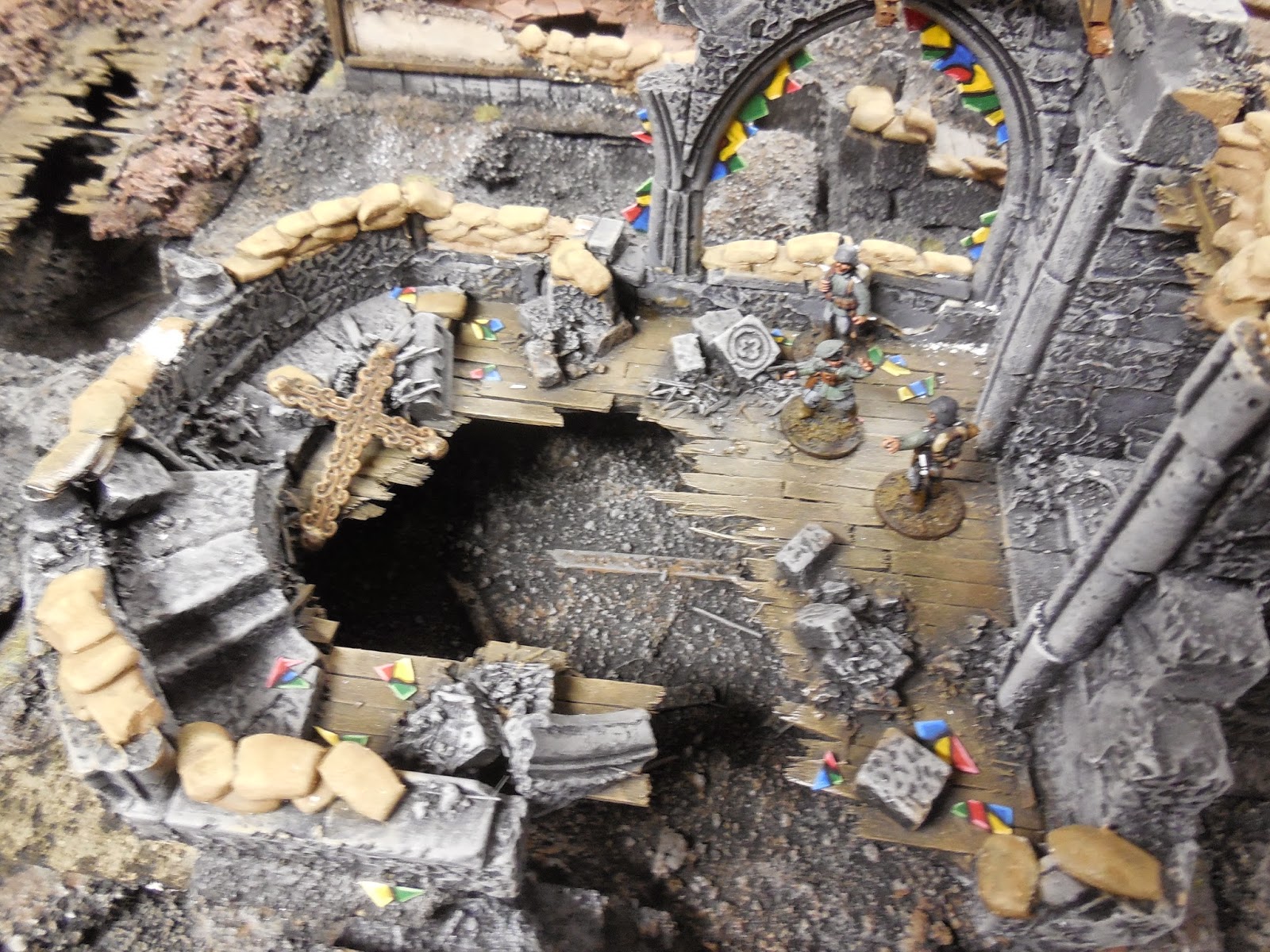 Some amazing detail in the church building, including broken pieces of "stained glass" and the gold crucifix from the altar. 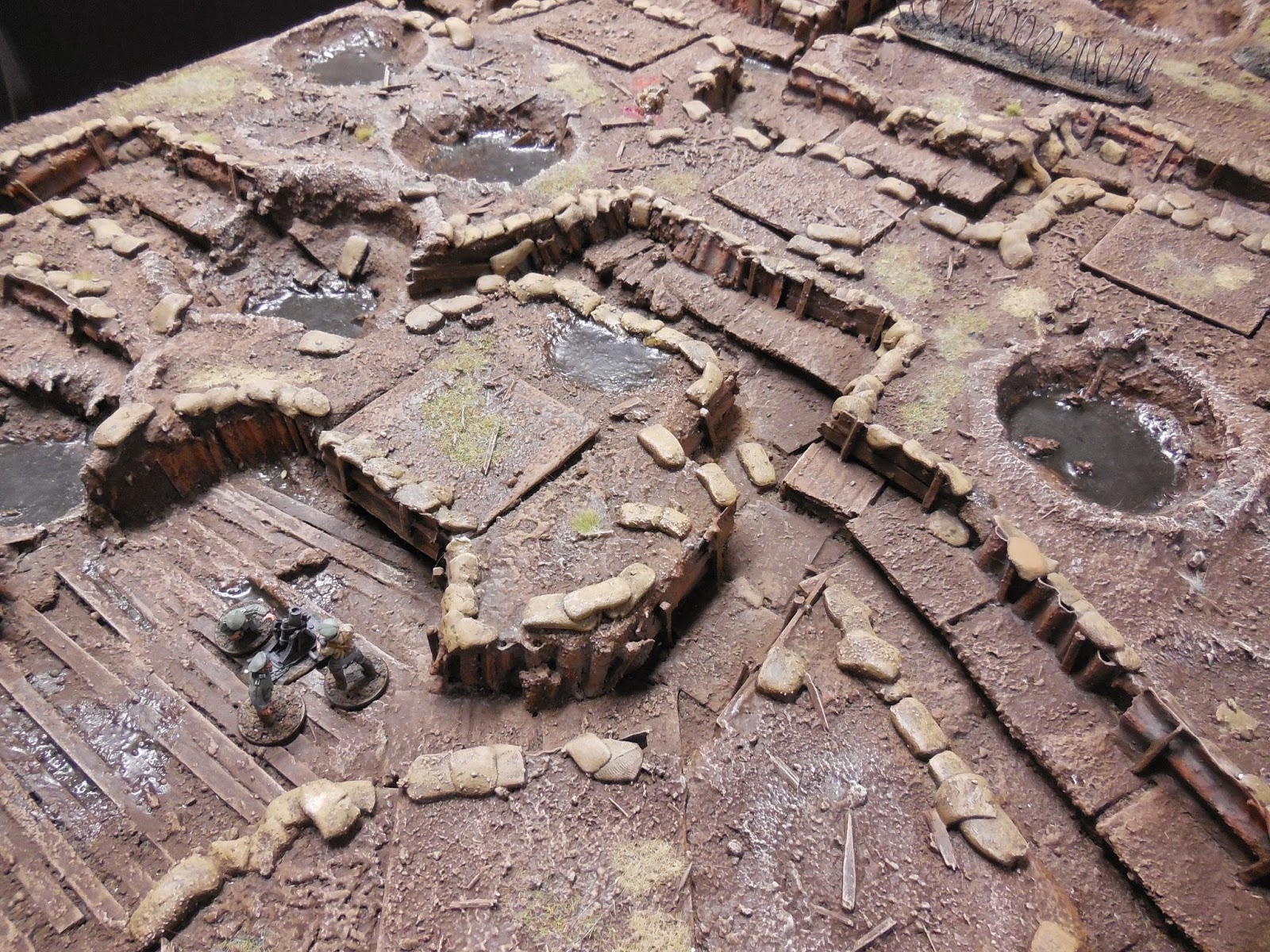 There are two straight-up "trench" boards, one with a gun position, here occupied by a German trench mortar crew. Lots of duckboards, reinforced walls, sandbags, craters, and resin water in the shell holes. 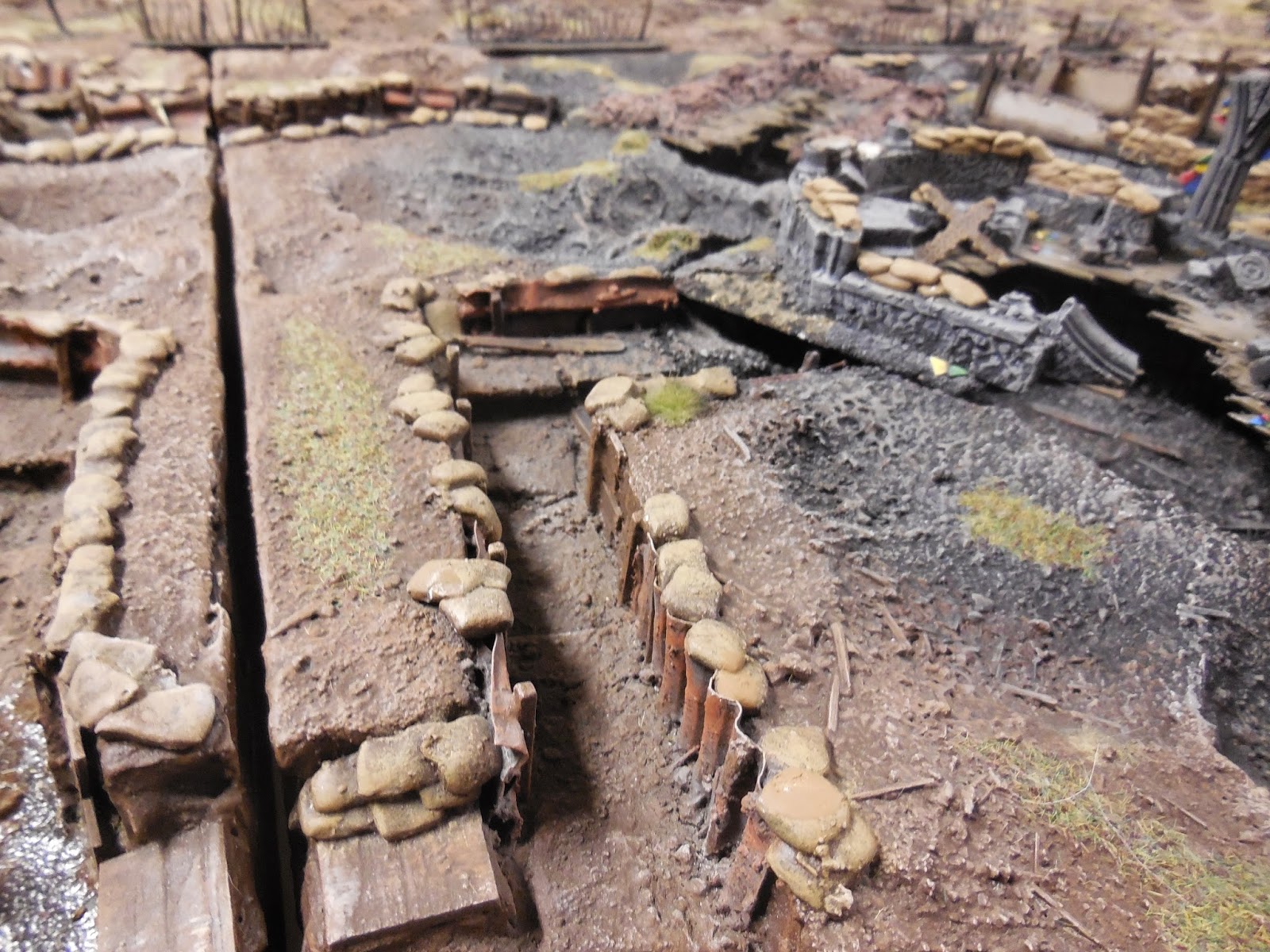 The boards butt up against each other pretty well in most places and they're somewhat modular - they can be arranged in different configurations as the trenches line up at the edges. 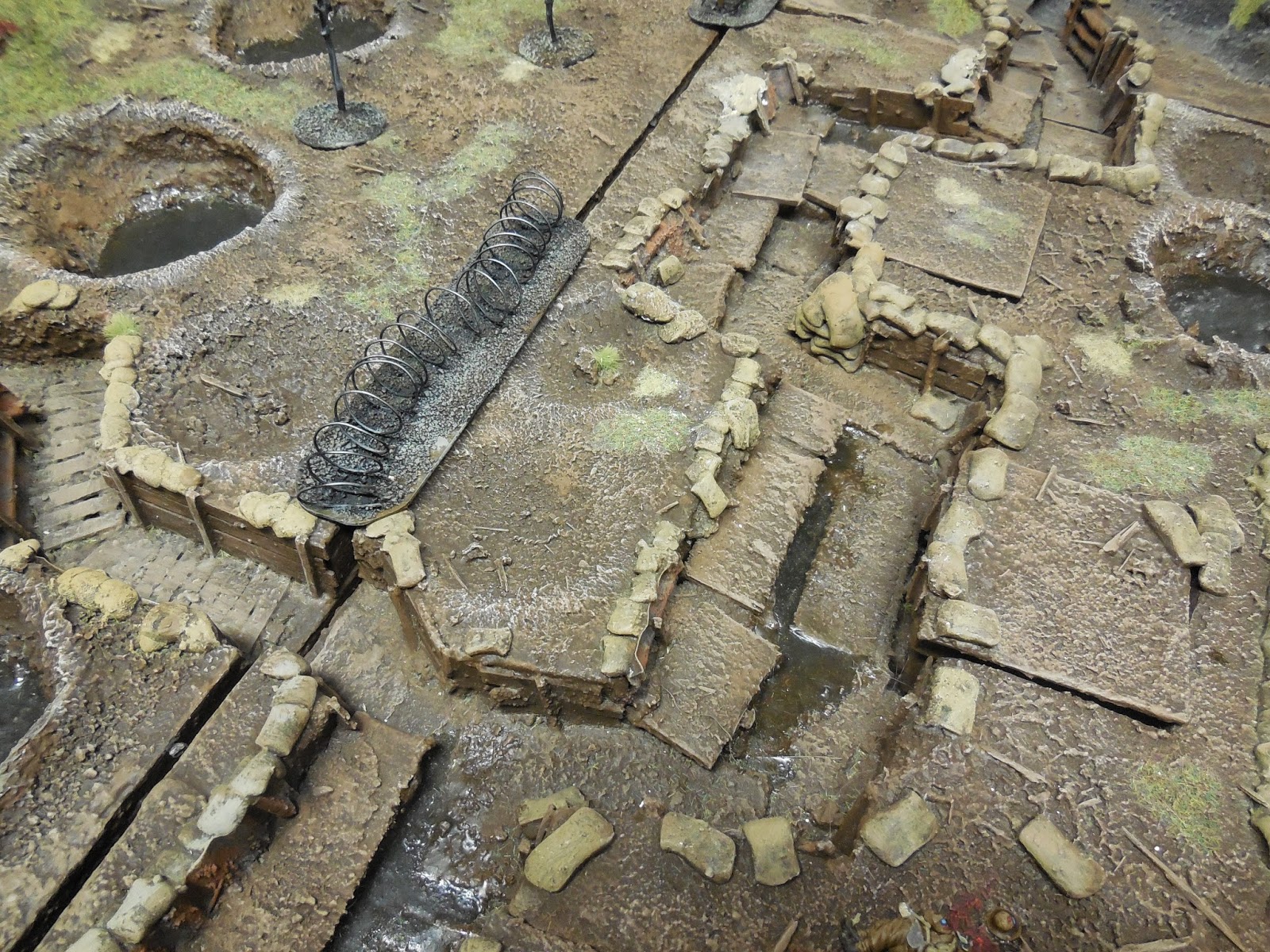 Barbed wire and blasted tree sections are from my own collection. I'm glad the boards didn't include wire as that would have made them nearly impossible to transport. 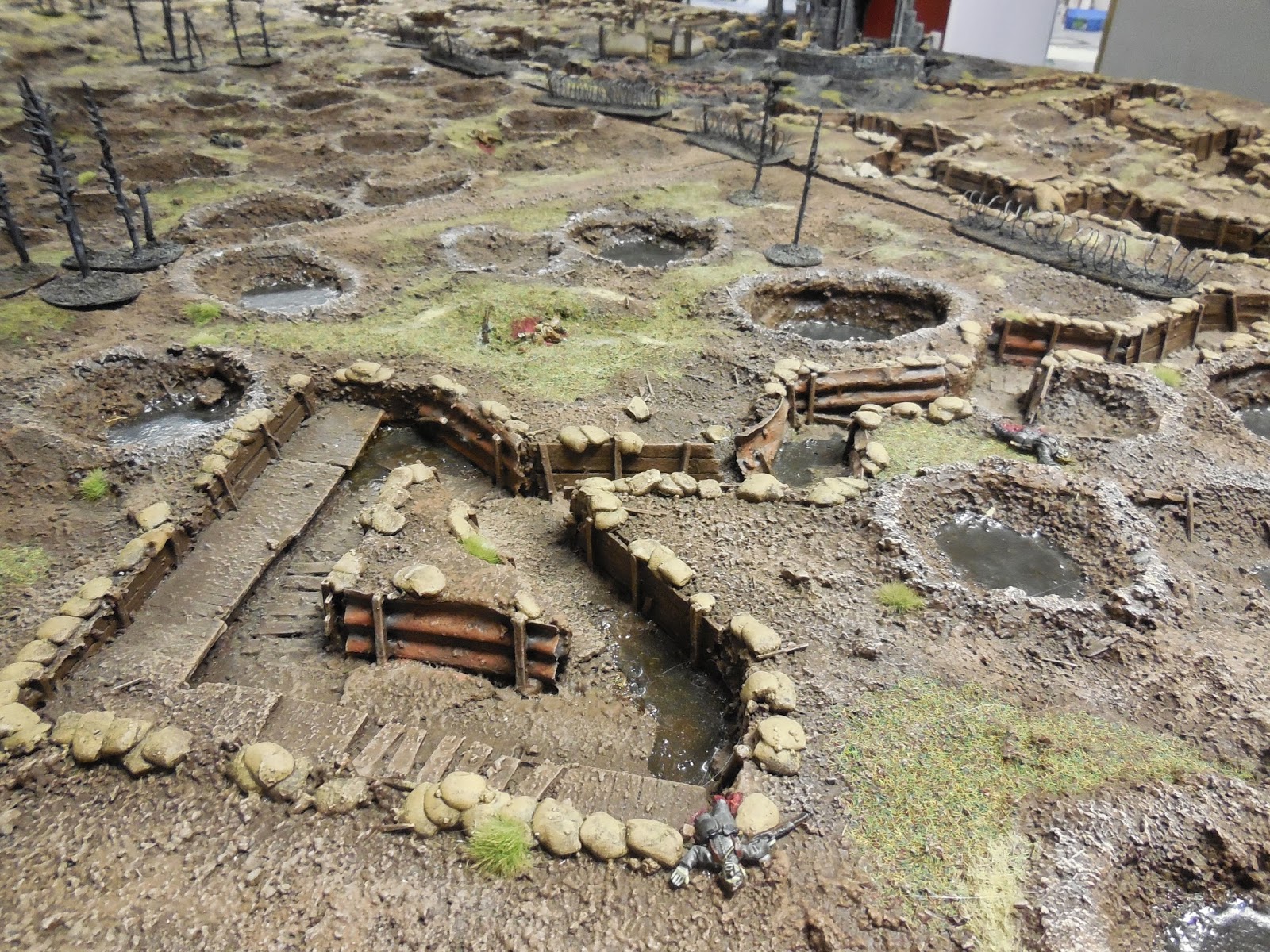 One of the boards incorporates a "sap" running forwards, with an island traverse position jutting out into no-man's-land. 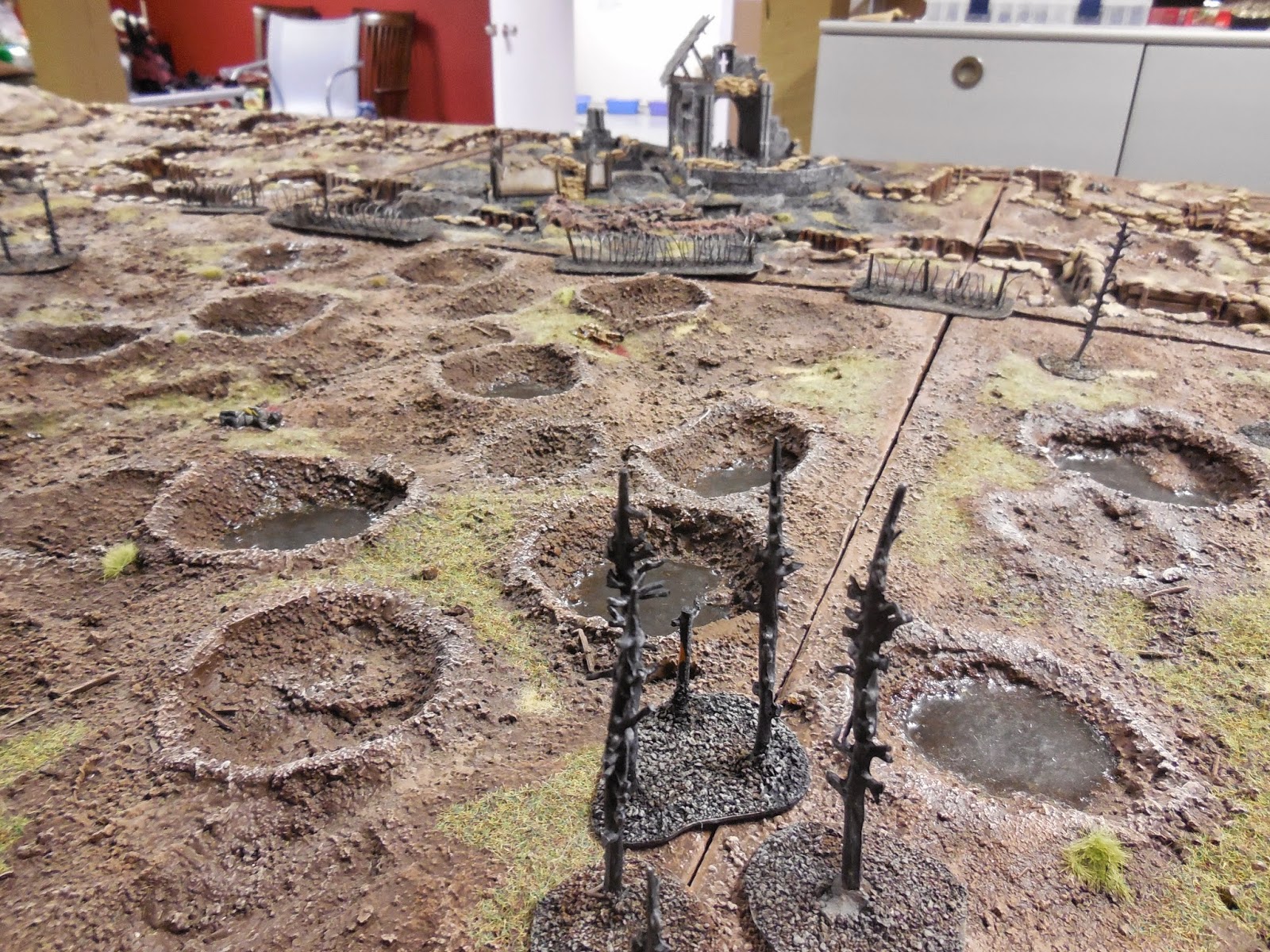 View from NML back towards the church. 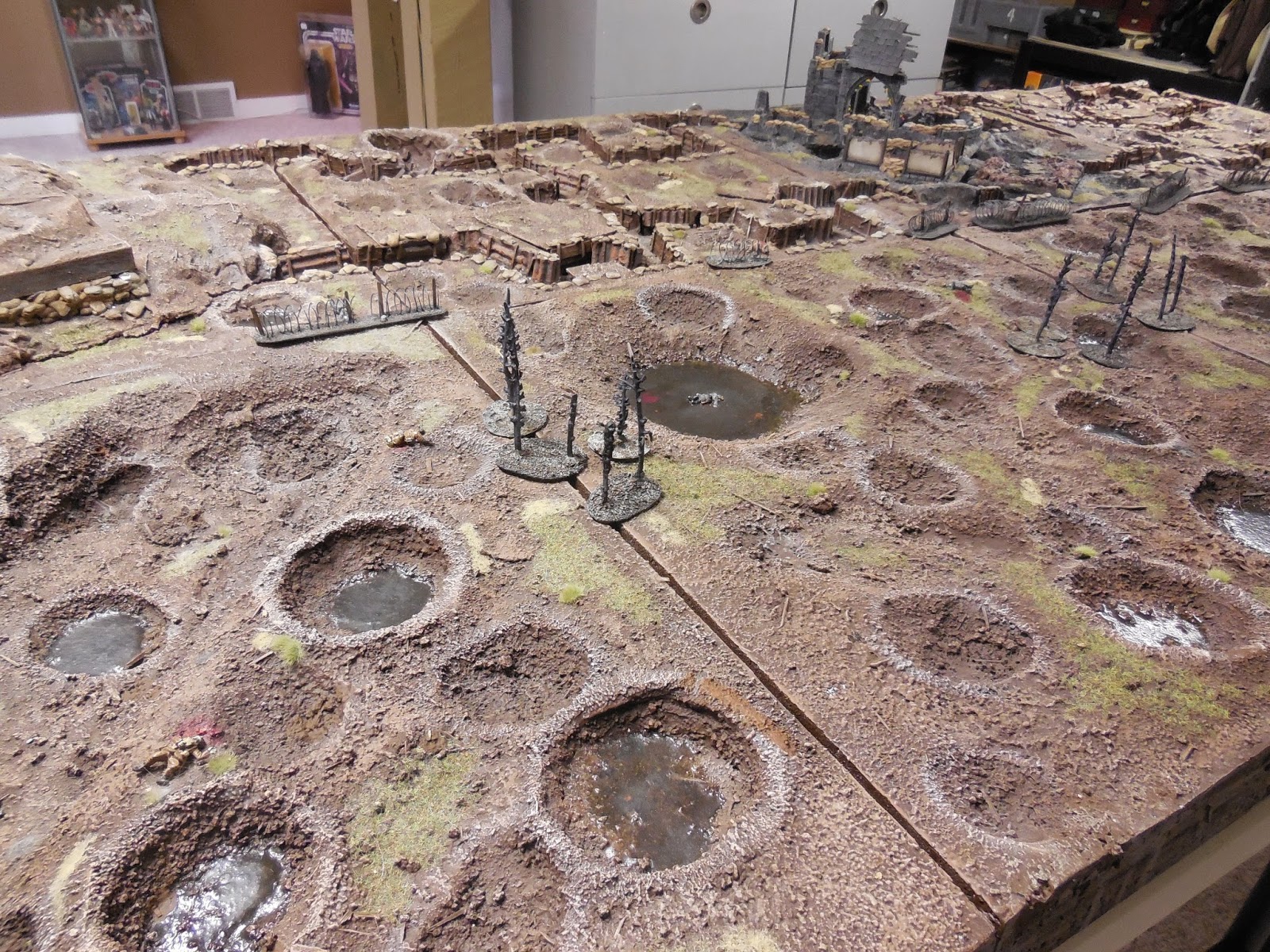 The NML board at left has a large ravine-like crater (left by a mine detonation perhaps?) that provides some cover. 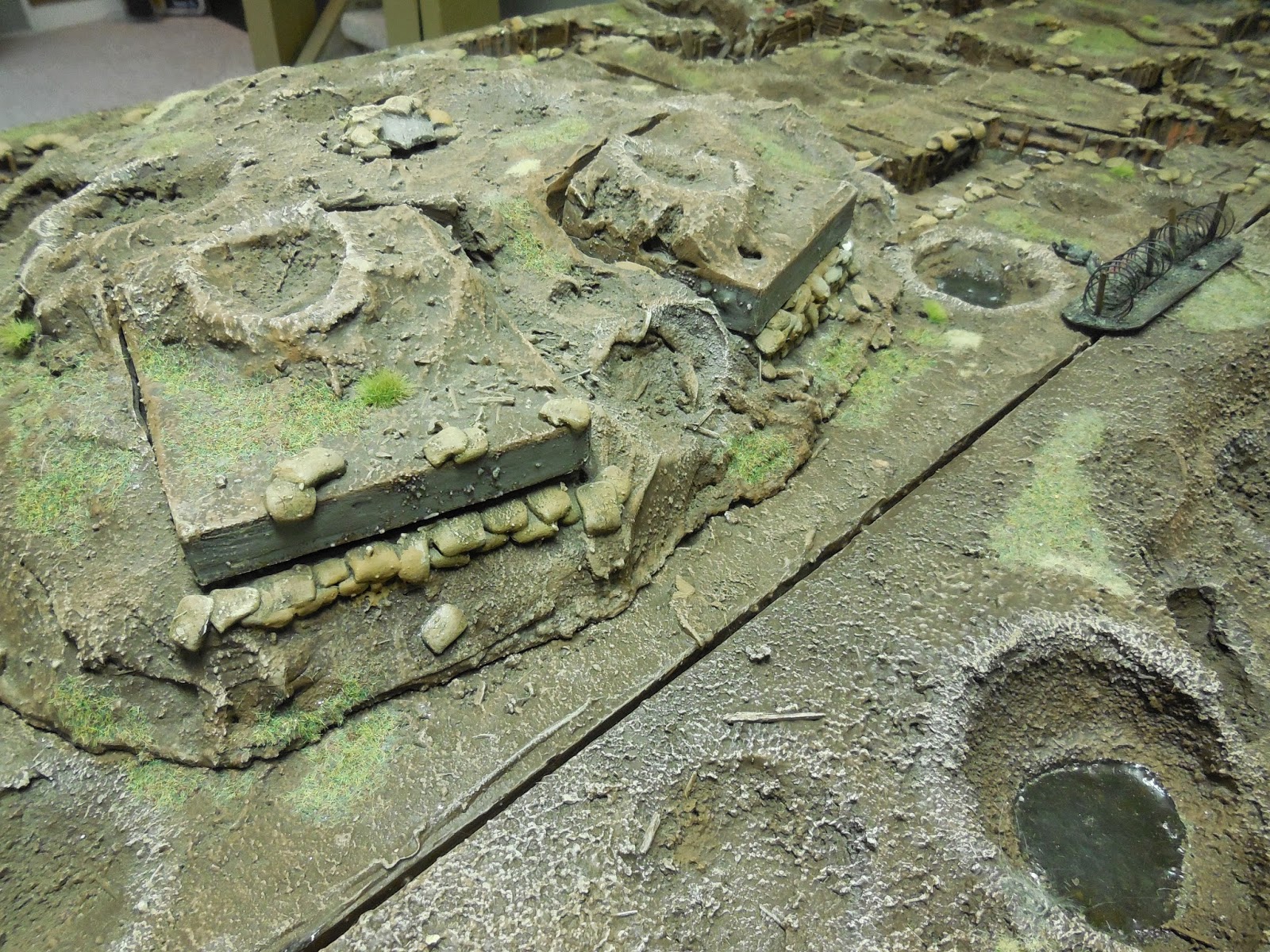 One of the trench boards incorporates an area of high ground I like to call "the Pimple" :-) You can see the bunkers built into it. 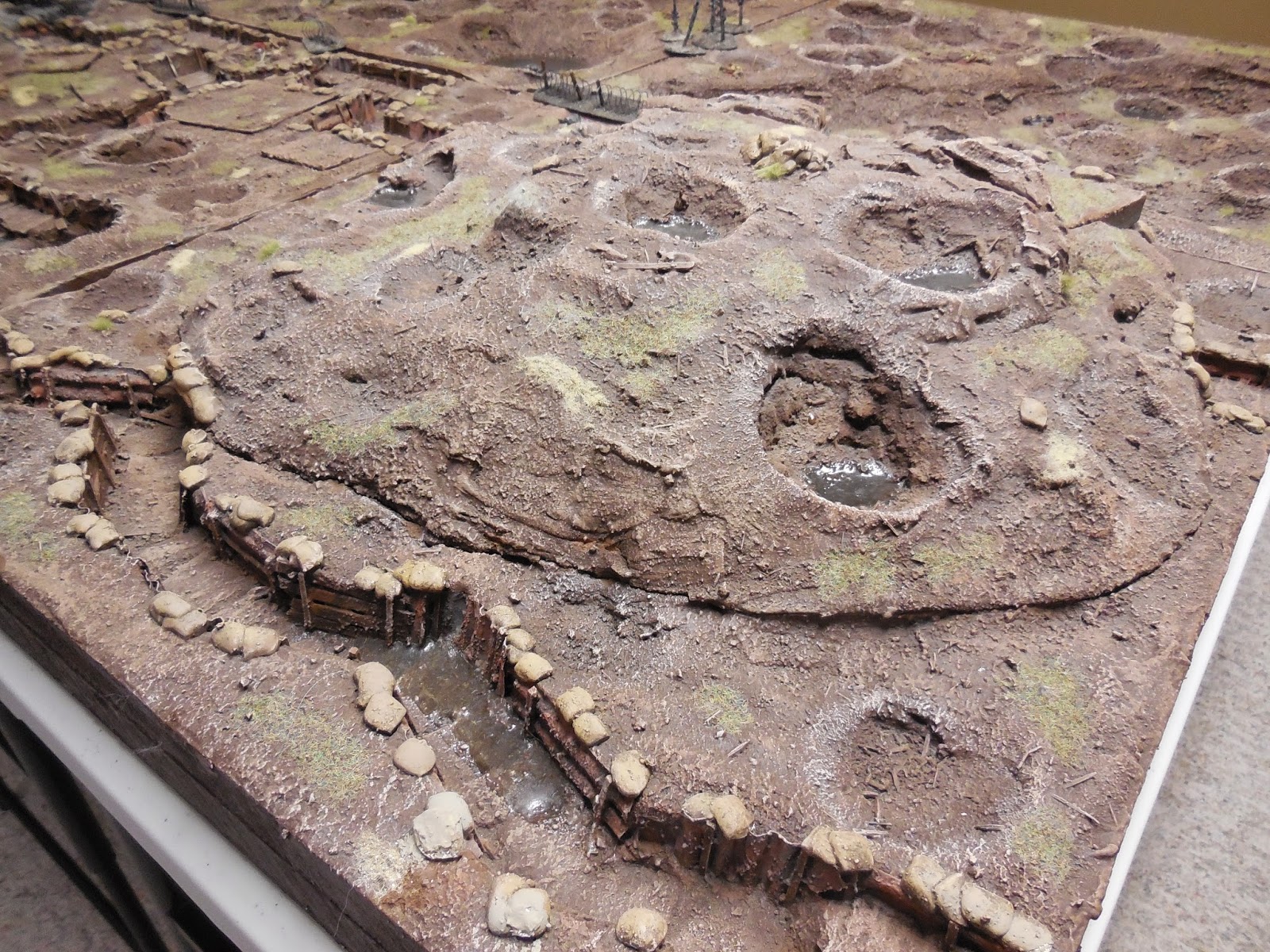 View from behind the Pimple. 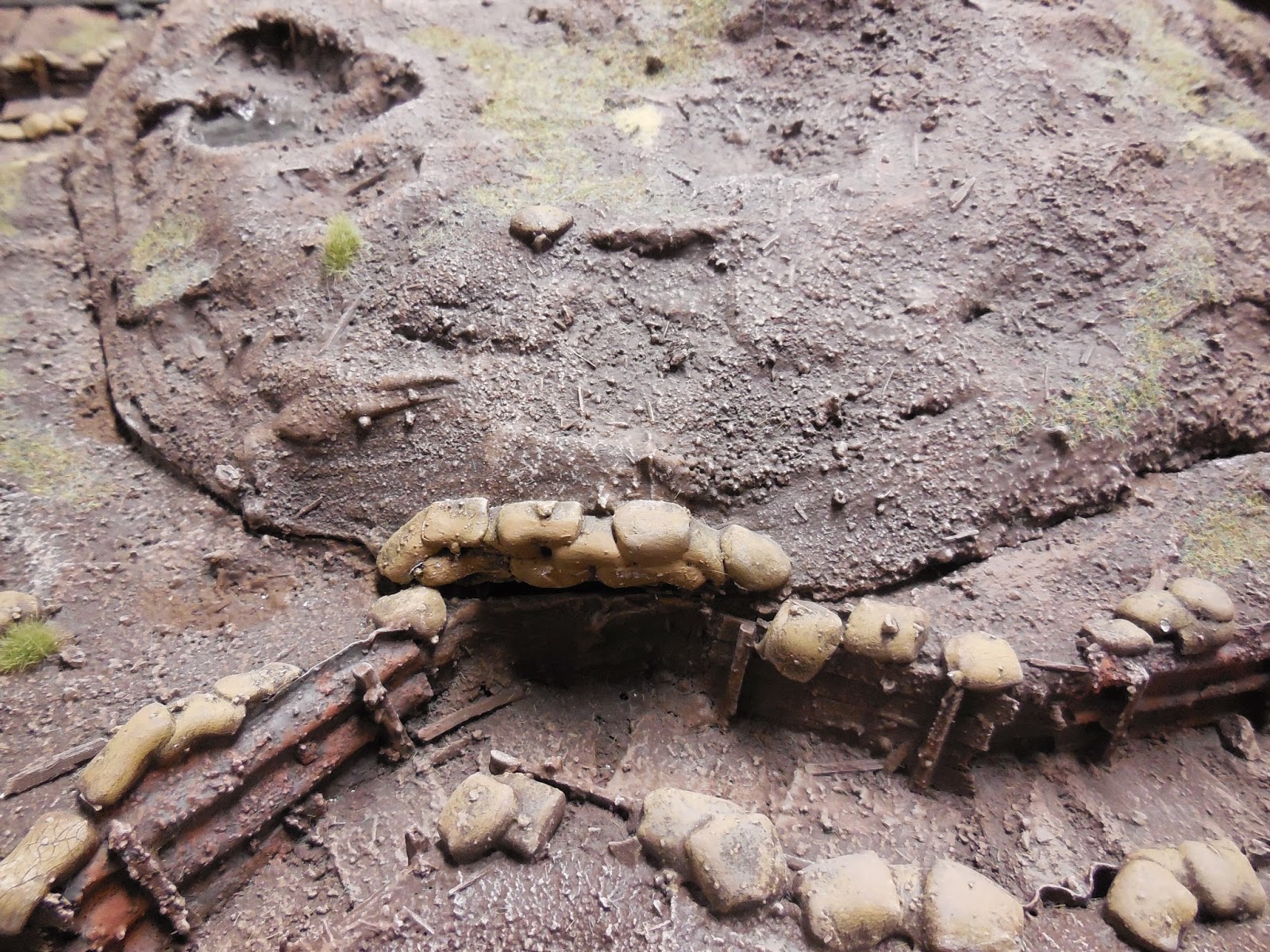 There are various dugout entrances spread around the trenches, including this one to the Pimple. 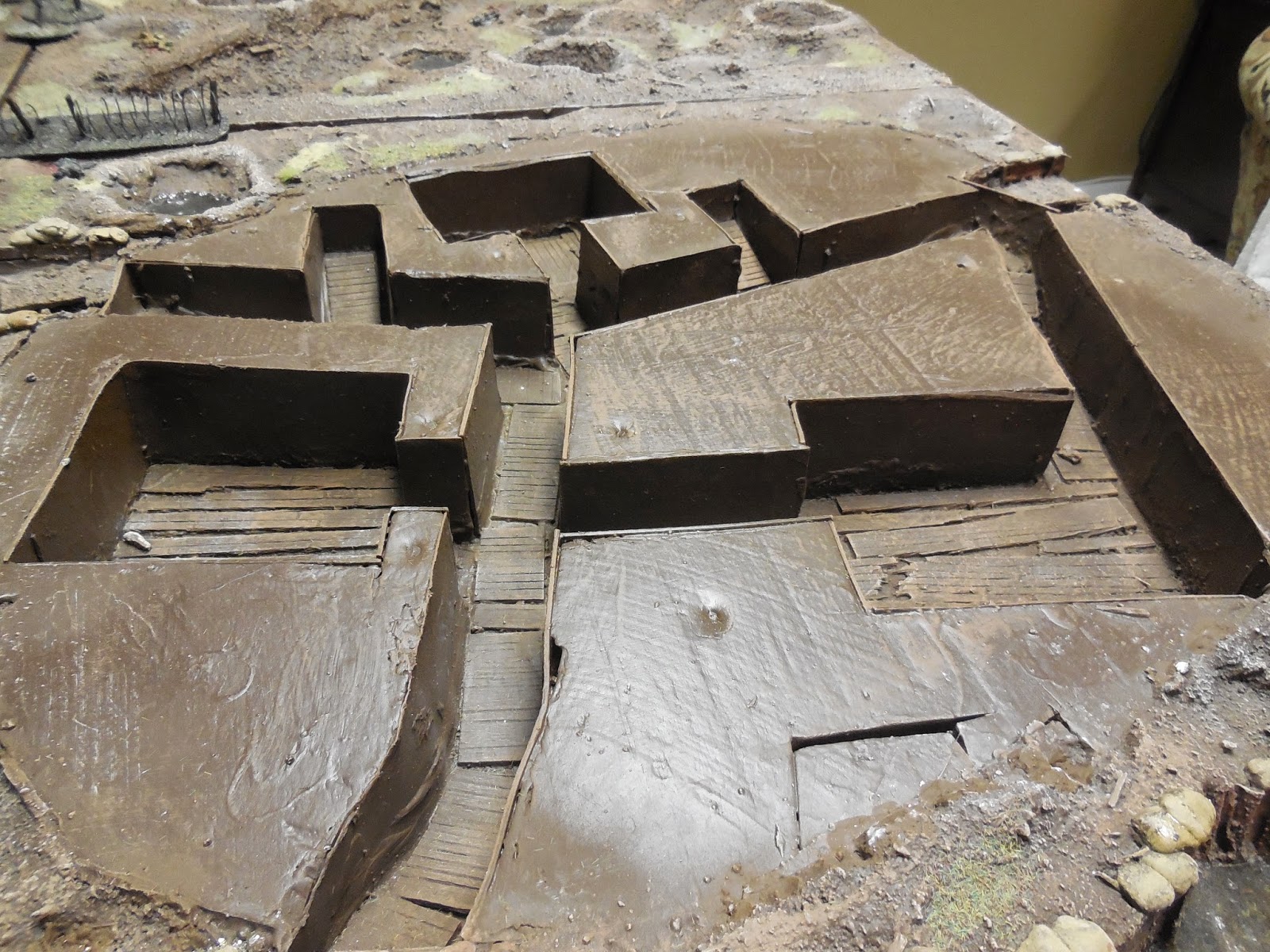 Amazingly, the top of the Pimple lifts off to reveal the bunker complex below. If I get really ambitious I may create an overlay for this section out of plasticard with terrain on it so the complex can be played as trenches, with the rectangular areas remaining as underground dugouts. 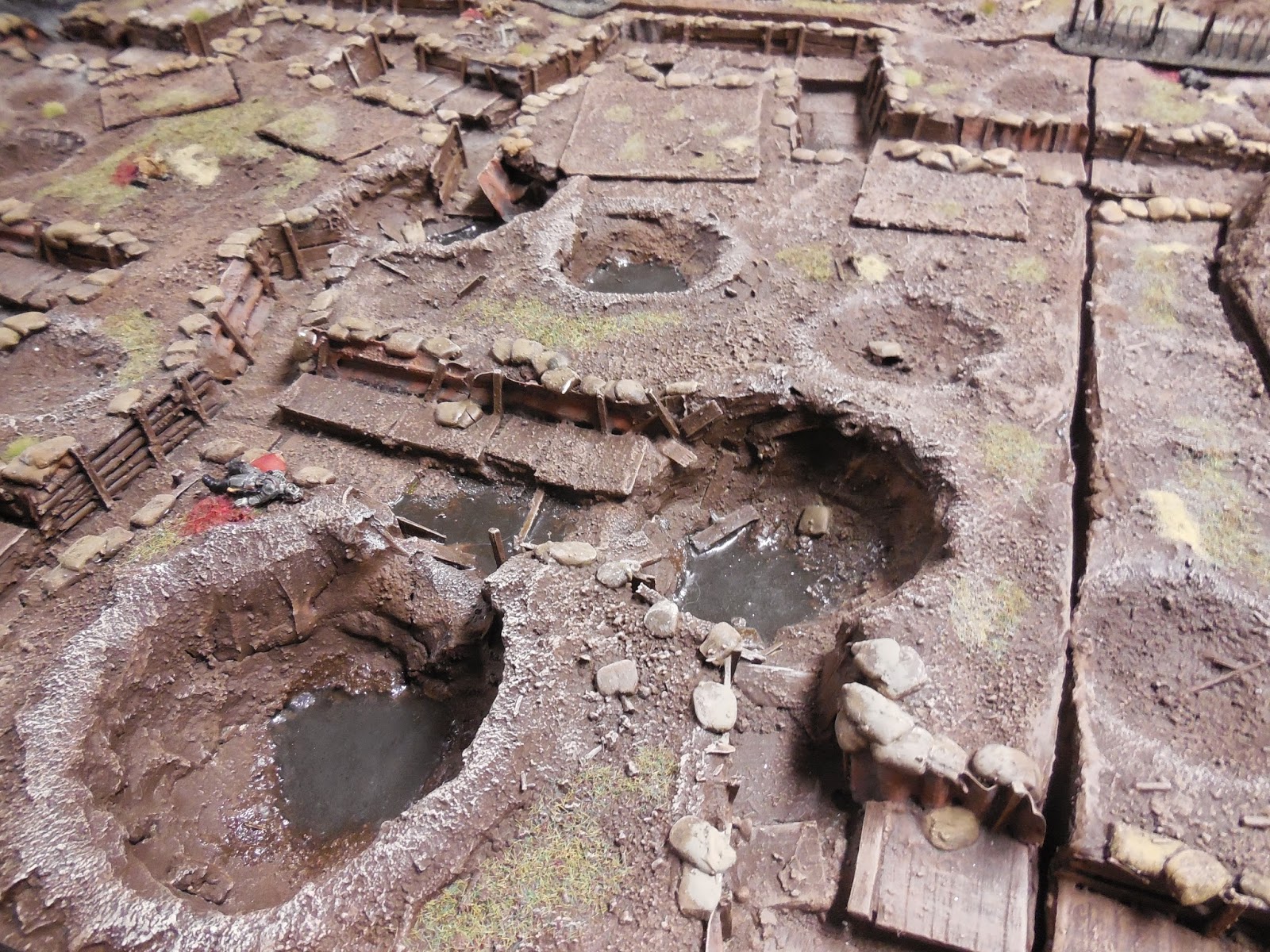 Shell holes and craters abound, many are flooded with water. 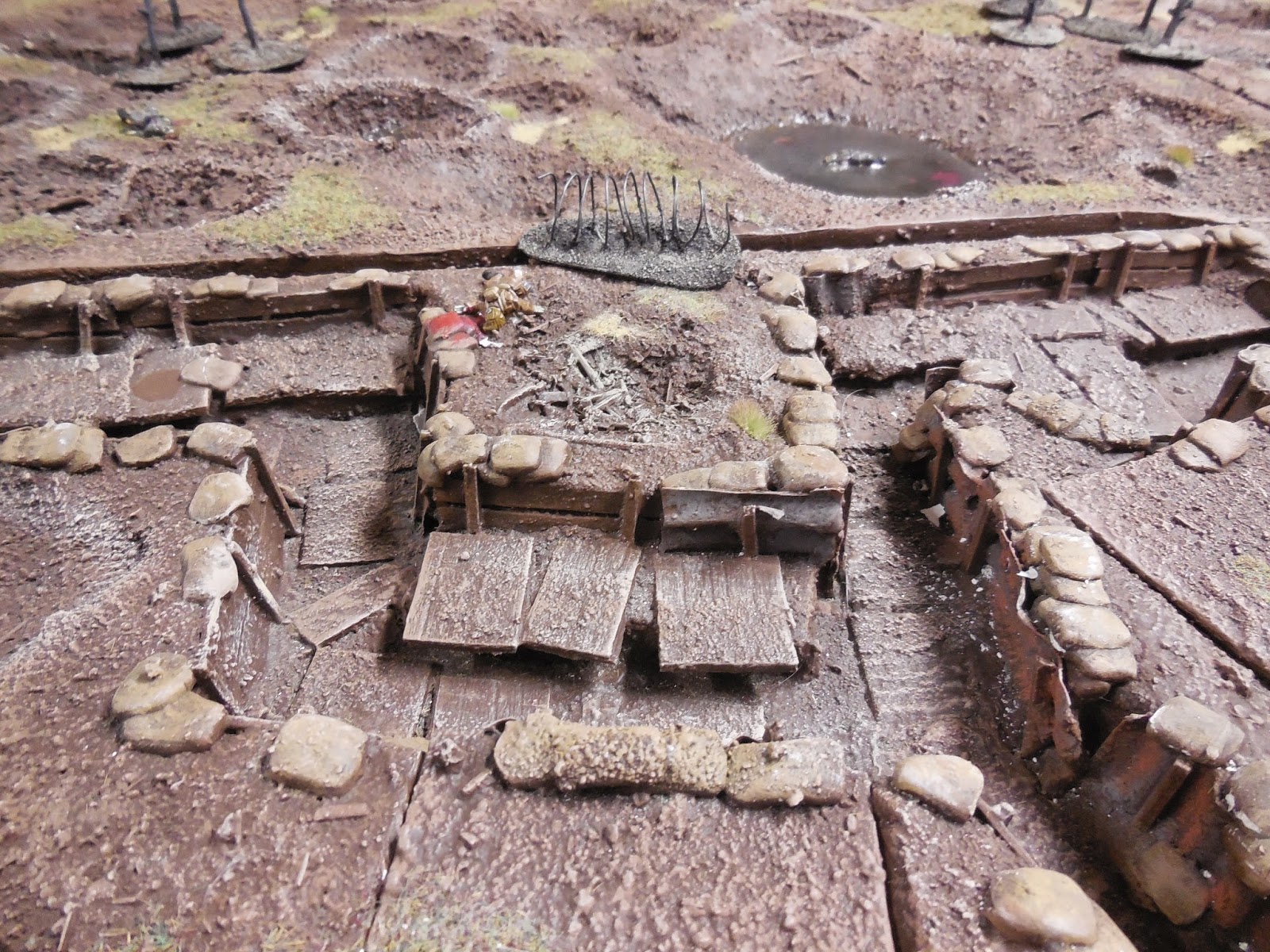 The trenches are quite realistic and irregular. 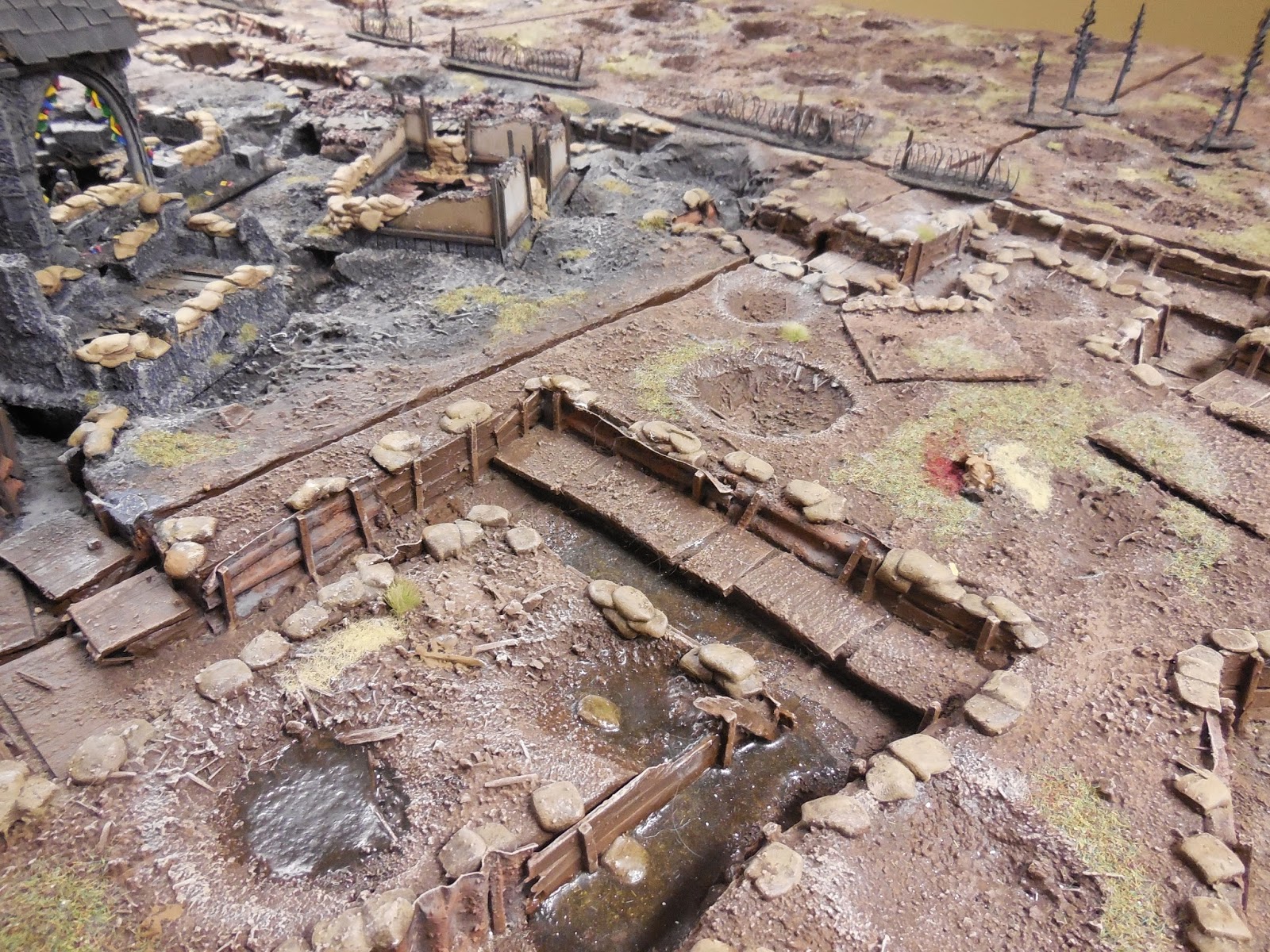 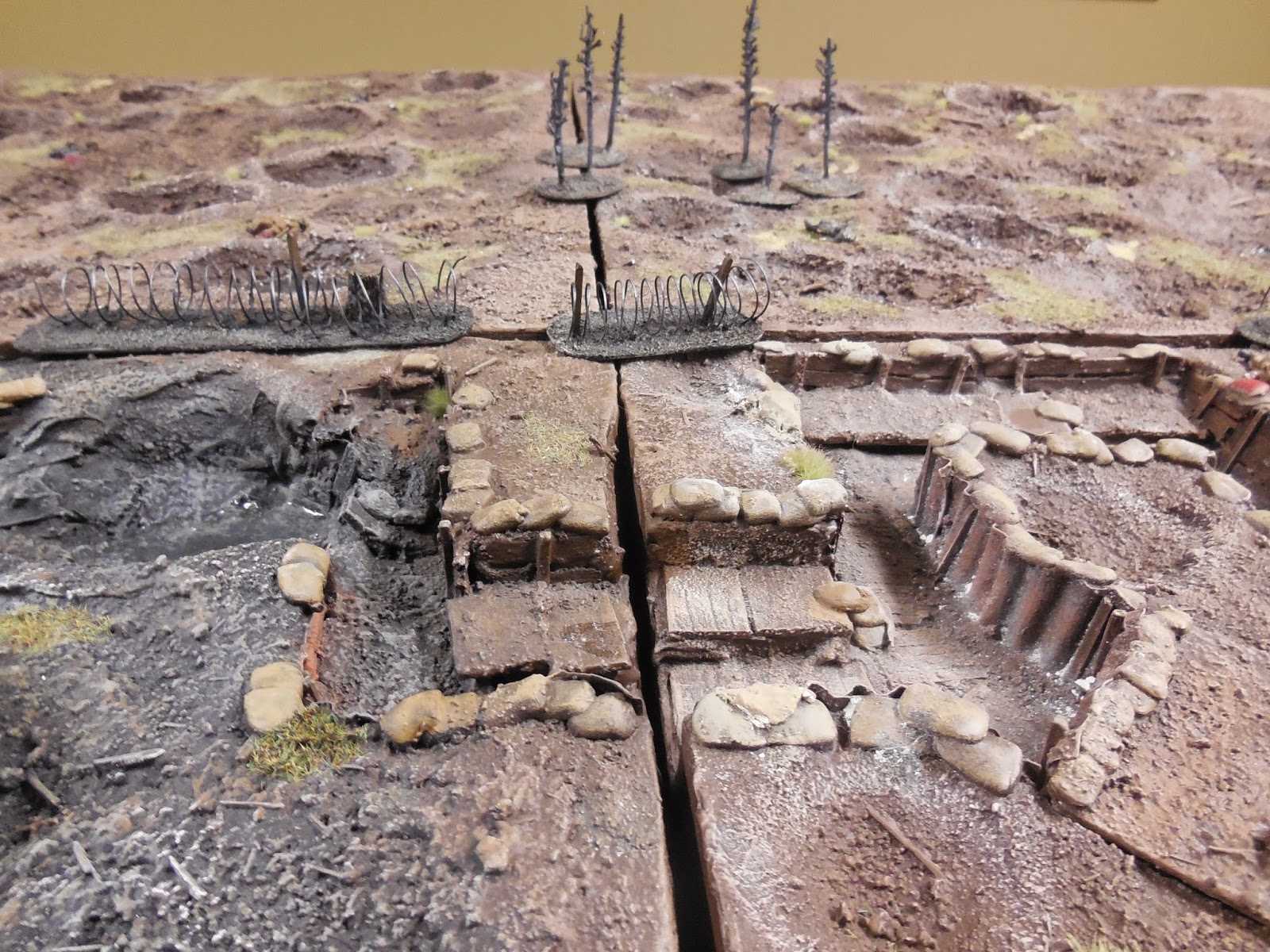 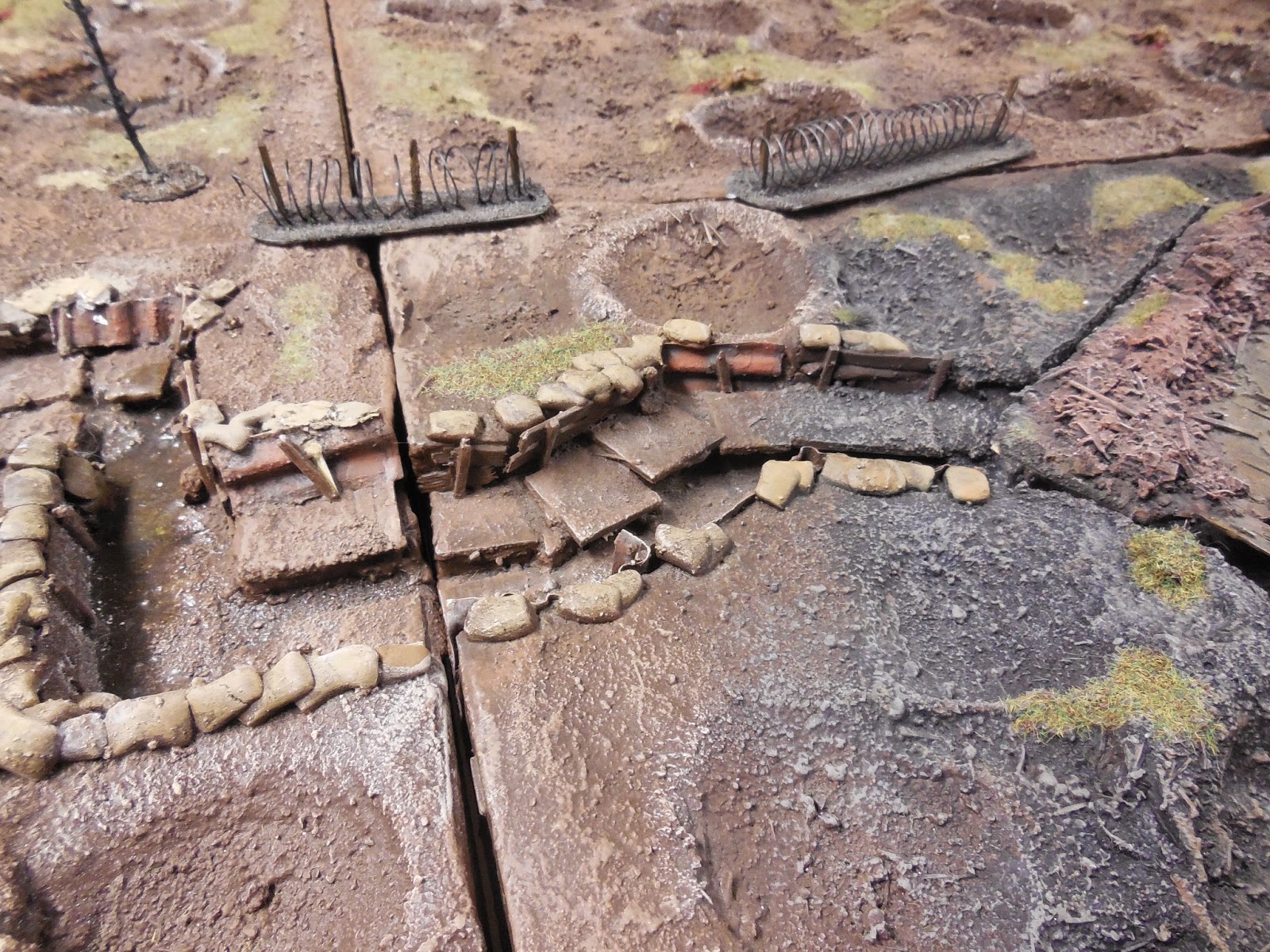 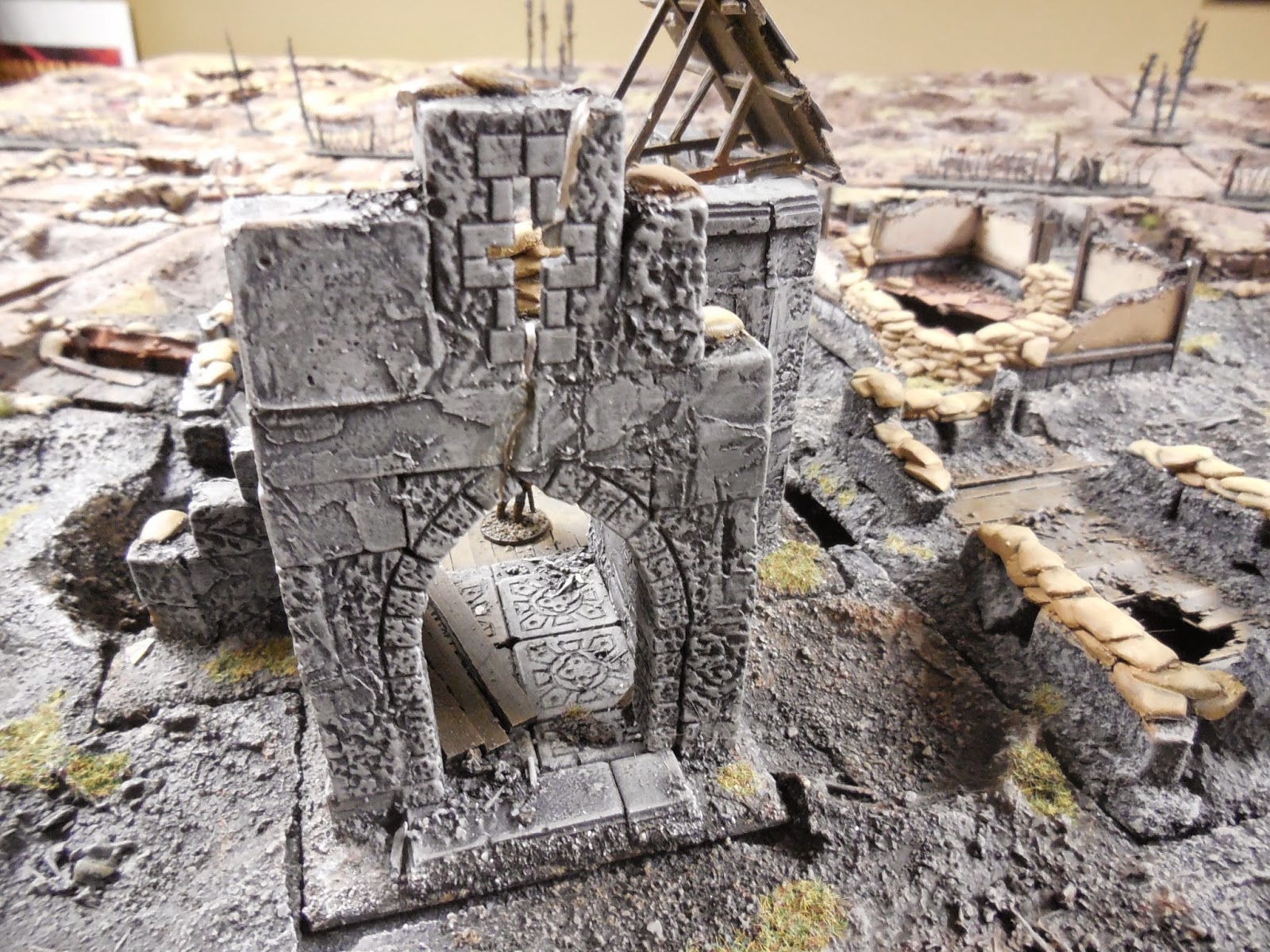 Some more of the church, as it's so impressive. 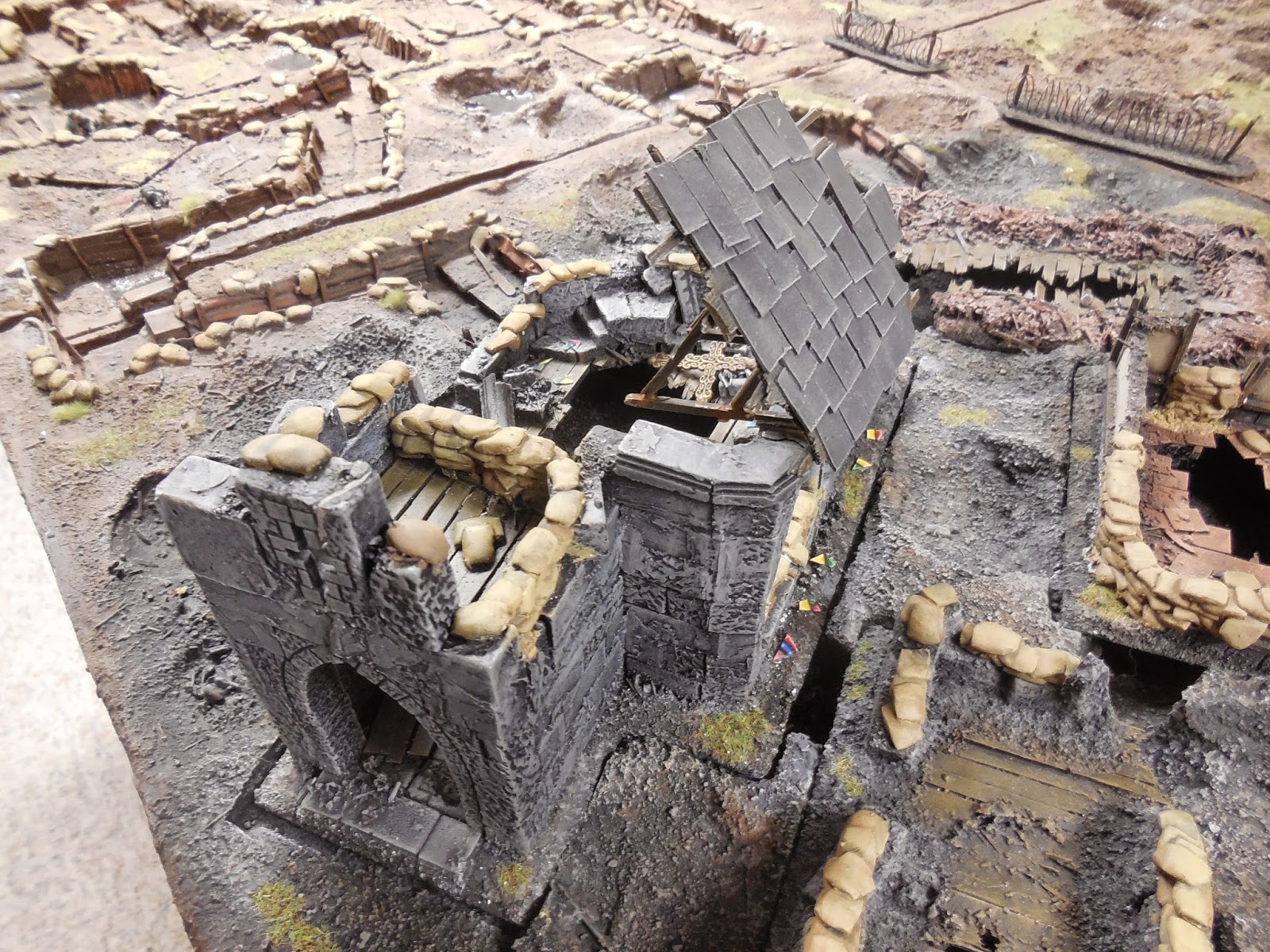 Tower is fortified with sandbags. 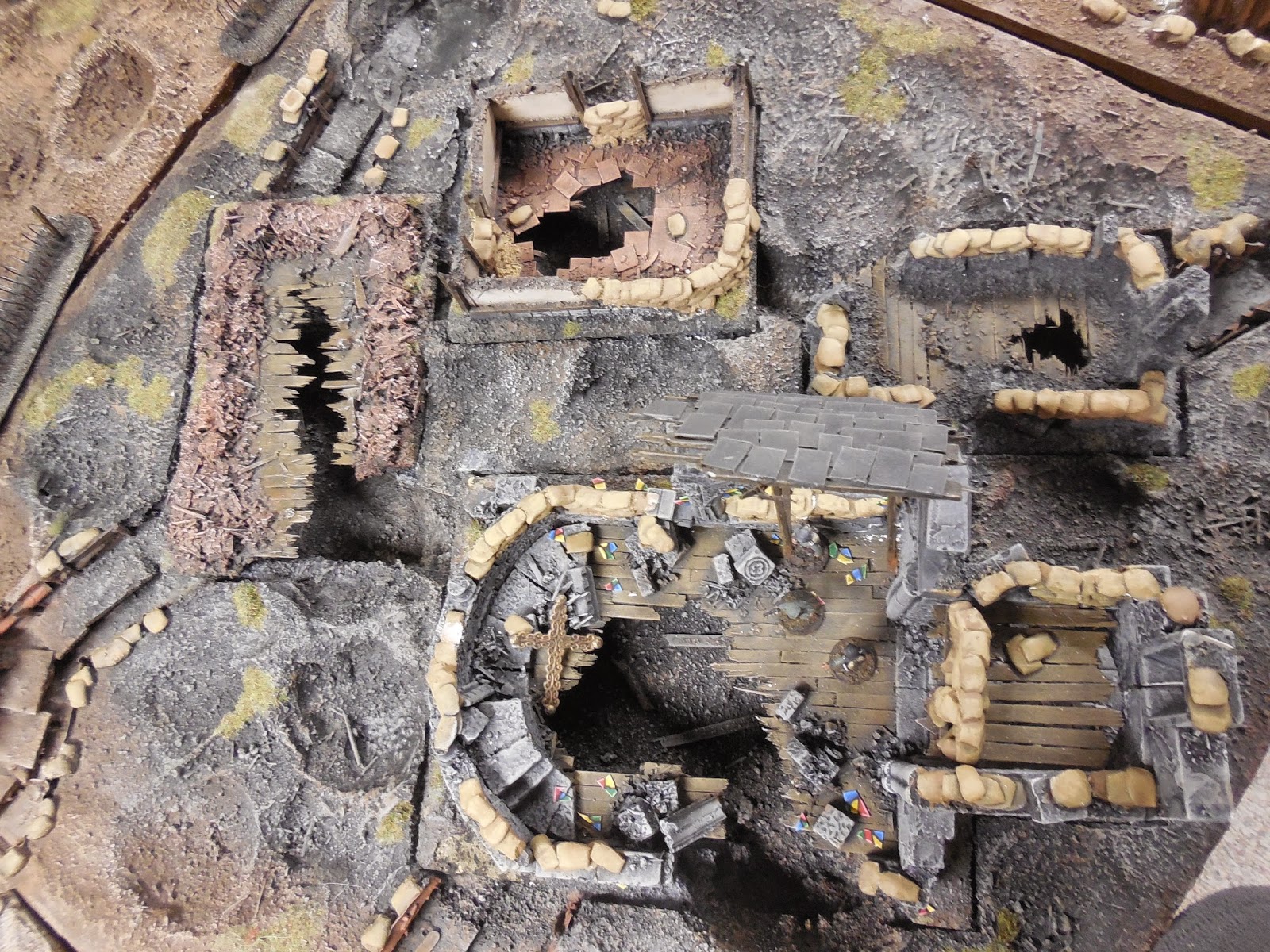 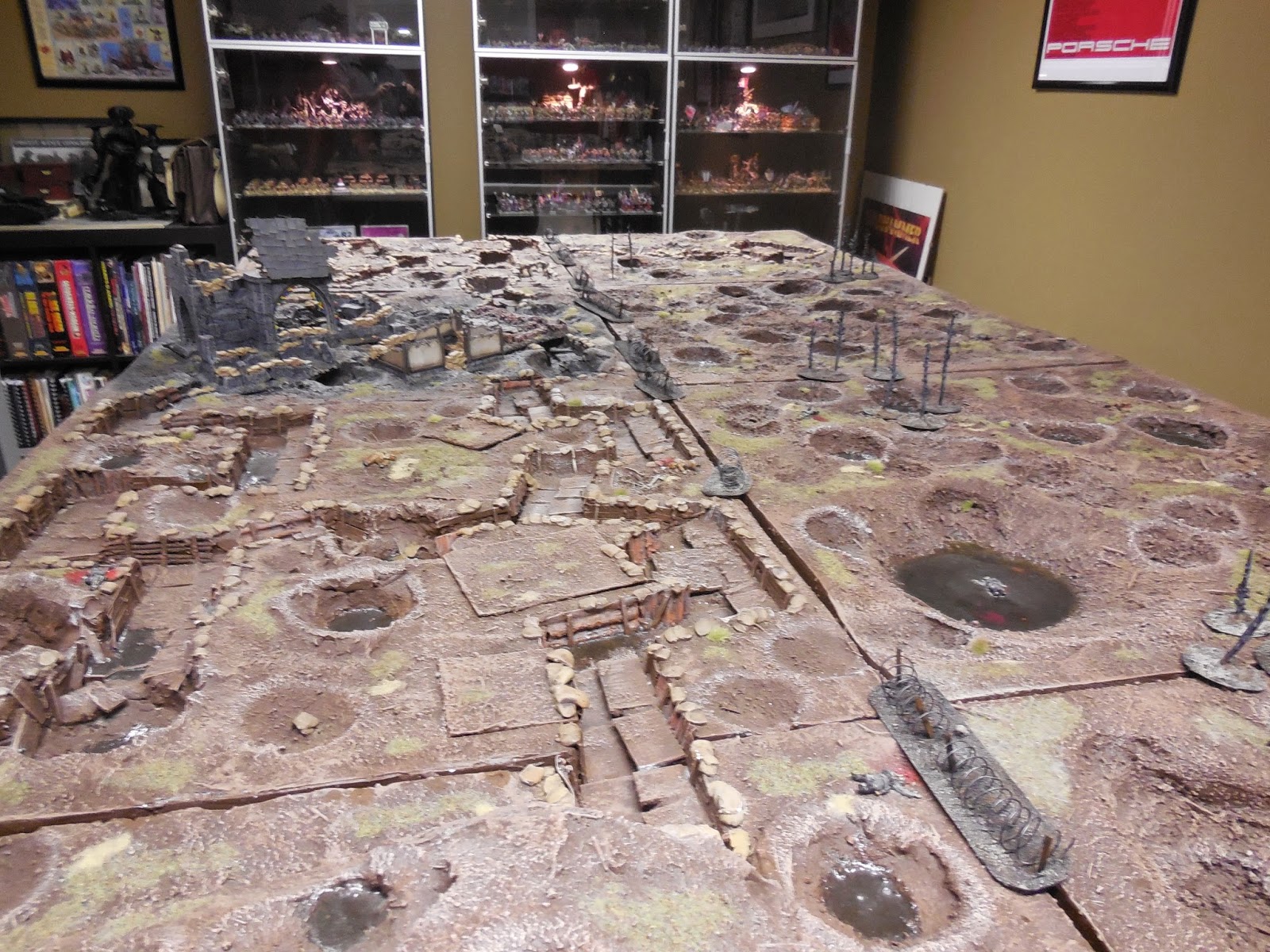 The view down the line. We've already played one 40K game on the terrain and it was amazing. Looking forward to much further amortization. Great job in building it, Daniel!
Posted by Dallas at 1:06 PM

That is quite an amazing board! Loads of work very obviously went into it.

Looking forward to seeing it in action.

What a fantastic purchase! The hours spent on that must have been quite high! Looking forward to seeing it in some games now!

Congratulations! That's an extremely awesome board.

This is a very nice board. I wonder what you paid. I was building my own modular trench table and I did 1X1 tiles and used some of the same techniques, but I also bought scatter terrain and bitz.

I had to abandon the project due to my life not going very well. All my gaming stuff will remain in storage at my mother's house for the foreseeable future. I even did some test Vandoos up...

Thanks guys! As I said, I can't take any credit for the work but I think they're swell too. Muskie, you can send me a message using the "Contact Us" widget at lower right of the screen if you like.

Stunning table- really captures the look of the place.

Wow, I would say you were fortunate there!

The church looks like the original owner was inspired by Sidney Roundwoods work a lot!

Hi! I'm Dan, the original builder and owner of these boards. I am very glad they are getting some good use in their new home. If you want, I posted an article on my blog about this collection, so come take a look: