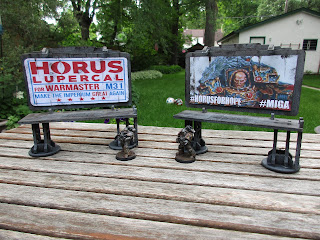 Conscript Greg, on the other hand, has been on a tear lately with his Thousand Sons and Space Wolves he's been working on from the "Burning of Prospero" box set. Now, this little project can't compete with that at all, but I like to think I'm contributing to the Heresy in a small way. 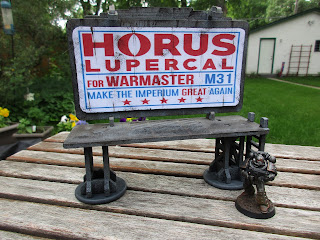 Awhile back I got some 28mm billboards from TTCombat - a firm out of the UK that makes no end of interesting laser-cut MDF buildings and terrain items. I assembled and primed them one afternoon about 4 months ago... and they sat... 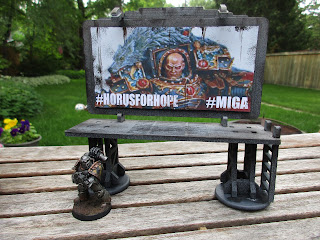 Then one day this week I was consumed by a mania to just get the damn things painted already. They had previously been primed black and dusted with grey spraypaint so all that was needed was weathering... and some actual billboard imagery, of course. So in keeping with the current Heresy rage I came up with a couple of suitable images from the Web. The "Horus for Warmaster" image is from redbubble.com, a custom t-shirt vendor. 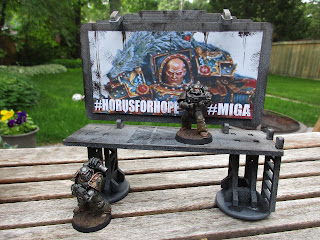 The image above was grabbed from Google Images with a couple of our clever hashtags added - "#MIGA" of course stands for "Make [the] Imperium Great Again" :-) 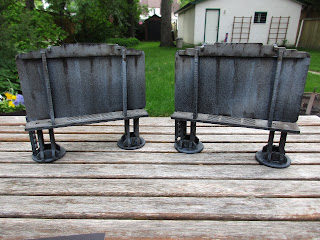 Lots of weathering on these structures - basically an uneven wash of Agrax Earthshade followed by sponge chipping and random streaks of Abaddon Black/Rhinox Hide cut with Agrax (like I said, "lazy") 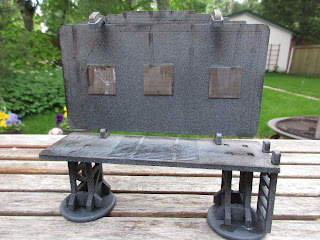 Now here is where the cleverness really shines. I figured that I might want to swap out the billboard images from time to time - the structures themselves are pretty generic and would fit in anywhere from the 1960s to the 41st millennium. My initial thought was to use neo-dymium/rare earth magnets stuck on the back of the structure, but the ones I had on hand turned out not to be strong enough. So I used some old steel bases I had laying around instead. 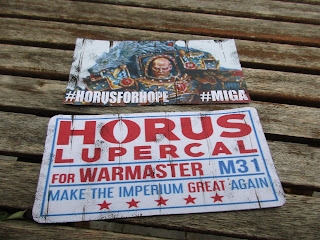 The billboard images were simply printed off on a colour printer and... 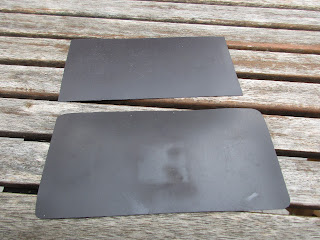 ...attached to some adhesive sheet magnet material from Michael's. (This is the stuff they sell to make fridge magnets).

Sometimes laziness can be a virtue!
Posted by Dallas at 9:31 AM

Finally, some truth in advertising! A refreshing change from all of the pro "Emperor" propaganda polluting the scene in the Imperium...

Great job on these Dallas, can't wait to get them involved in a game!!