My painting meanderings return to "Team Yankee", the 15mm cold-war-gone-hot game from the folks at Battlefront (based on the novel by Harold Coyle).  I had initially painted some forces back around the release of the game (nearly a year ago) during Curt's last Analogue Hobbies Painting Challenge. The recent release by Battlefront of a range of West German troops has prompted me to go back to my collection and start to round it out a little more for some larger games.  This has also happily provoked Dallas to start collecting a West German force of his own...always nice to see fellow Conscripts diving in! 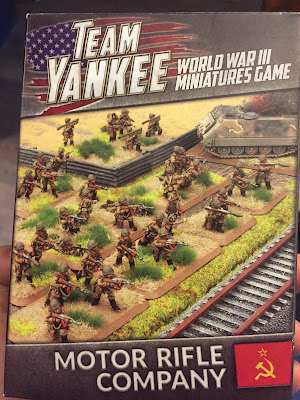 To represent Soviet motor rifle troops I initially used 15mm modern Russian figures from Eureka. Battlefront's new releases often take a long time to arrive here in Canada, and the Russian infantry they had "released" were particularly late - but they did eventually arrive!  I want to add a second motor rifle company to my Soviet forces, so I thought I would start with the infantry, and I cracked open the box from Battlefront.

The Soviet Motor Rifle infantry box has quite a bit for you - a very comprehensive pile of metal! The Soviet player in Team Yankee can vary the size of their Motor Rifle from small (and close in size to the NATO infantry platoons) to very large (with 21 bases total), and you can bolster them with a base of troops carrying shoulder-launched SAMs. This box has it all! No complaints on the selection of contents...but...

Battlefront's sculpting of infantry can be quirky at times, but I generally like it.  What I find very frustrating about Battlefront is how uneven the quality of their casting can be, and this was certainly the case with this box! You expect to be cleaning up a few mold lines and removing tags, but among these figures were several absolutely brutal castings, with particular weakness on things like the magazines and barrels on the AK-74s. This was disappointing, and I wish Battlefront would do a better job on the casting process. 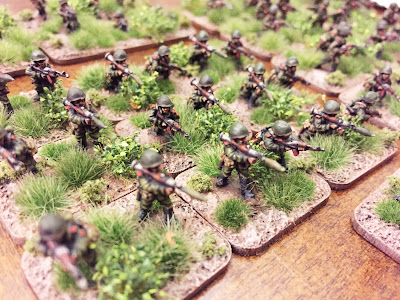 All the same, there are so many figures in this box that weaker castings can be lost among the decent castings, with dark paint and groundwork helping to overall cover these sins, and at the end of the day, we have another Motor Rifle Company ready to mount an assault on the West!

For now they are really not "Motor Rifles" - just "Rifles" - until I get another batch of BMP infantry fighting vehicles finished.  As soon as I can get a shipment of bases in from the good folks at Warbases I'll get started on that.  Until then, I'll move on to some other Team Yankee projects.  My US mech infantry needs some M113s and other bits...

If you are considering "Team Yankee" (and you should - it's fun!), I would still recommend the Eureka Russian infantry over the ones from Battlefront based on my experience with this box.  It's not a perfect solution - Eureka has no Russian infantry with the shoulder-launched SAMs - but they are very nice over all and you can leave the anti-air duties to the ZSU-23-4s.

Another option for 15mm Soviet infantry is Khurasan (lovely sculpts - and they have incredible vehicles too), but availability of those figures is a bit hit-and-miss as the frequent "maintenance halts" leave the web store closed.  If you get through to Khurasan, be sure to order all you need!

Overall, it's great that there are options out there for 15mm modern gamers, so whether you go with Battlefront, Eureka, Khurasan or others, all the best with your painting projects!
Posted by Greg B at 10:52 AM

Lovely work Greg! These look absolutely terrific. I can sympathize with your comments on Battlefront's sketchy casting quality. I got several boxes of their Vietnam range and found I was binning about 10% of the figures. I'm also not fond of their 'Team Yankee' rules (the igougo mechanic is just too herky-jerky), but it matters little as I love seeing your stuff on the table.

Some beautifully painted figures Greg, love the busy basing too.

Excellent job. Shame about some of the castings being hit and miss. Khurasan yes order when you can!

Good job done by you. It looks beautiful!

Inspiring work Greg! Really makes me want to delve back into my own Soviets head first.

Those look amazing. Very inspiring to get me to work on my MRB.