A couple of small Rogue Trader projects finished.  Up first is a Tarantula weapon system, with crewman.  The Tarantula mounted pairs of heavy weapons - usually lascannons, but could be all sorts of different weapon systems.  This was before you got screwed by things like "twin-linked", so it actually counted as two lascannon shots. 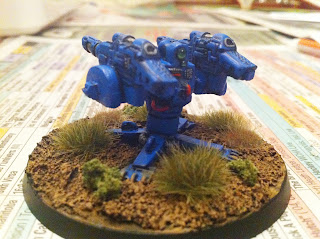 Back﻿ in the Rogue Trader time, you could mount a large variety of weapons - from grenade launchers and heavy bolters to multi-meltas.  You could even mount pairs of conversion beamers on to the system.  Can you imagine how long it would take to resolve the volleys of beamer shots as they ate up terrain as well as troops, and figuring out where each beam finally petered out? 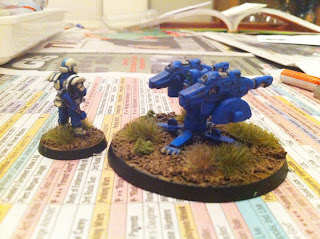 This will come in handy for the Imperial Guard garrison in New Rynn City as they await the next move of Trhugg Bullneck and the Orks in our mini-campaign.

I also added a servitor model (or at least what I believe to be a servitor model).  Servitors accompany the Imperial Guard vehicles and heavy equipment on the table, and can fix vehicles and damaged weapons.  My impression of the Servitor models from the Rogue Trader era was of a small figure, but as you can see the model is pretty hefty - larger than the Imperial Army gun crewman.  I guess they toughened them up before converting them to walking mechanical garages...at least he looks strong enough to fix a Predator with that wrench.

So what's next? How about a squad of Penal Battalion troopers?  Remember the, er, "motivational collars"?

Sadly the castings have a mono-pose look (after all, I think they only ever did one real variant of this type of figure) but they will make for an interesting addition to my Imperial Guard collection.  These are up next on the painting line.
Finally, I was excited to acquire an old Imperial Army Land Speeder from E-bay. Only problem is....how the ###k does this thing go together?????  Will be a while before I figure this one out...I may try and convert one of the current plastic ones to a Guard crew instead...

So that's all for now - watch for some more finished work pictures soon.

I got one of those old metal imperial guard landspeeders still in blister I believe. IG could have bikes at least for officers back in the day...

Good to see some love for the old Imperial Guard Models, keep it up! I have the same landspeeder and, if I remember correctly, the trick was to attach the engines to the back of each seat first, then fit them to the central section. Somewhere I still have the exploded diagram from WD for this model, in case it's useful...

@Ethics Gradient - if you have instructions, I am interested for sure....

@ Ethics, I think you're right about that. It rings some bells.

I think you're Servitor is actually one of the old Talisman or Space Pirate models ( a cyborg ogryn), but it looks very good in the servitor role. Not 100% sure on the i.d (I'd need to look it up) but my gut tells me I'm right.

I have a to of the old metal Guard. They're a lot smaller than the current line.

I have one assembled and painted by KevinH that you can borrow. With the instructions from @Ethics Gradient you can see how it goes together.

I have a couple of the old Imperial Army speeders. I only have one complete and had to use an old ork heavy plasma gun on the other one. I posted them up on my blog at