Hunt for the Graf Spee

Last Saturday Dan and I met at Sylvain's who hosted the first of what will be a two part game depicting the hunt for the Graf Spee. Sylvain had devised a very clever map-plotting game using a double blind system where the German player hunted merchantmen all the while avoiding being bagged by the Allied Southern Fleet who were desperately trying to bring them to heel. The Germans had the Graf Spee pocket battleship along with its support ship the Altmark. Their aim was to sink 10 merchantmen without loss. The Allies had five battlegroups of varying sizes, with about 14 ships in total (including two British carriers), in which to comb the entire Southern Atlantic. The Allies had to hunt down and sink the Graf Spee before it caused significant damage to the merchant fleets.

Dan took the Germans and I the British with Sylvain acting as umpire/moderator.

Now, the nail-biting aspect of this game was there was always a distinct possibility, reflected in the game charts, that Dan could sink a merchantman before it could get a radio signal off for me to be able to plot and pursue. Basically I had no real idea from turn to turn how many ships the Germans may be sinking. For the Germans, on the other hand, they could not just indiscriminately sink merchantmen - they had to recover the crews and provide for their safe passage to either the Altmark or a neutral port. Once the Graf Spee had three captured crews it was reduced to a maximum speed of 10 knots until it could offload them.

I arranged three battlegroups to patrol the shipping lanes from the tip of Chile to Central America while the other two cruised along the coast of Africa. After a few turns the wireless lit-up with the news that a merchantman was under attack off the coast of central Africa. Like hounds to the hunt I fanned out with my three South American groups and began the cross Atlantic crossing to try to box Dan in. My other two fleets attempted to block off the north and the south to prevent the Graf Spee from fleeing in those directions. Days past with my ships roaming about looking for signs of the raiders. Nothing. As Dan and Sylvain were in discussions every turn I was beginning to despair that he was bagging his lot of merchantmen right under my nose! 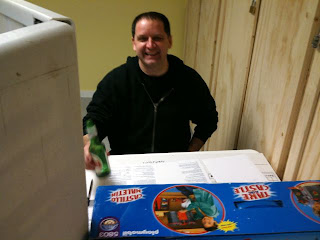 Dan about to hit me over the head with his bottle of Stella as I take high-altitude reconnaissance photos of his dispositions over the Playmobil cloud cover... 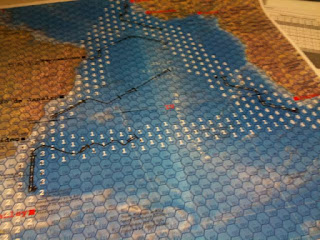 To my relief one of my seaplane pilots reported seeing a pair of suspicious ships near the coast of South Africa. The hunt was on again and to make a long story short I ran down the Graf Spee with three pursuit groups, brought her to battle and sank her. It turned out that after Dan's initial success the dice had rebelled against him and he could not pin down another merchantman. He also found that having the Altmark cruising with the Graf Spee to be a liability as it did not have the same turn of speed for quick raiding and evasion. 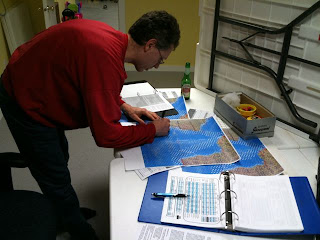 Sylvain madly trying to plot the movements for both sides.

We decided to switch places with Dan taking command of the Allies and myself the Germans. I decided to keep the Almark and the Graf Spee separated, thinking that if I got lucky I could use the Altmark as a ruse while striking out with the Graf Spee. I hung out in the central Atlantic for a few turns (days) and then moved into the shipping lanes off the coast of central Africa. After a day of cruising I chased down a fat merchantman and managed to sink her before she got a message off. I was stoked! This is easy, I thought. Wrong.

I moved south and took another merchantman which managed to get its distress call out. The game was up and I had to get out of Dodge. I fired-up the engines and made a mad dash south to try to avoid the Allies who I imagined would be vectoring in fast on my last position. I also sent the Altmark north with orders to meet the Graf Spee off the coast of Central America. I lingered in the sparsely used lanes in lower latitudes hoping for a bit of luck - no dice. Meanwhile Dan had discovered the whereabouts of the Altmark and began to chase her down to the inevitable outcome. So, hoping that Dan would think that I was up north I decided to make another fast dash for the coast of South America to see if I could slip into a neutral harbour, off-load my prisoners and then make another runner back to African waters. 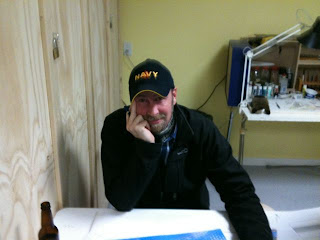 Me contemplating my fate and making my 'private signal' to Dan...

As fate would have it another merchantman hove into view just as I approached Central America and I (the idiot) just couldn't resist. I duly bagged her but at the cost of having the entire Allied fleet aware of where I was BEFORE I had gotten rid of my prisoners. Stooopid. Nonetheless, as a sweetener, another merchantman staggered into view and I thought what the hell, no guts not glory, eh? As it turned out this newly captured ship had secret papers on board which gave me another victory point - half way there. Now I was saddled with four shiploads of prisoners, the Graf Spee waddling at 10 knots, and FIVE Allied battlegroups bearing down on me. No bloody worries, mein her. 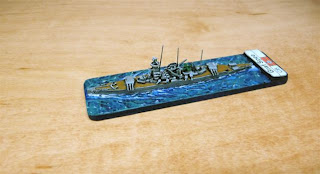 I asked Sylvain how long it would take me to off-load the prisoners on-shore. He said it would only take a few hours. I asked how many Allied ships were immediately in sight. He said I could see two light cruisers and two heavy cruisers. A pretty steep match-up but not entirely impossible. So I made the decision to run into the nearby neutral port of Montevideo (no historical irony there), disembark the prisoners, give the crew a pep talk (with beer, schnitzel and Iron Crosses all around) and then steam out to face the Allied battlegroup(s). This is where we called it for the night, knowing we would want to play out the tactical action next month in miniature using General Quarters. It should be a pretty cool if somewhat brief battle. We'll keep you posted on how it all turns out.

vs. five battlegroups? should be no problem at all...

Well, I hope to make my break for it before all five groups make it on the scene. If I can keep it to just the four Allied ships I just might have a chance if I can get a good run with the Graf Spee's main guns and not get mauled too badly. Yep, a few big 'ifs' in there.

It's cool seeing the high level aspects of the game.

I look forward to seeing the Graf Spee's dash for freedom.

Home made or commercially available?

The map is home made. I've downloaded a big map from
http://www.lib.utexas.edu/maps/index.html
and applied a hex grid pattern to it. I've added numbers and seaport names and voilà.