It's always nice to dig through the hoard of unpainted minis in my basement (known euphemistically as "pending projects") and find a nice surprise, still in its box. Many, many years ago I purchased an Ork Gargant for Epic 40k from the shelf at Campaign Outfitters. It cost approx $20 Canadian.

Who knows how long it had been sitting there? It then sat more years in my basement. During my Epic re-basing project, I found it in the basement, put it together and painted it. So, better late than never, I guess. 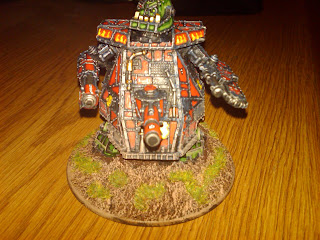 Here is a pic of the model next to the larger, scarier "Great Gargant", which I acquired from Fawcett member Sean M. years ago. It gives a sense of the relative size - I think the Gargant fits into the line at about the same position as the Imperial Reaver Titan - scary, but not the scariest thing. 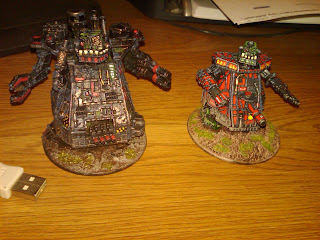 Now to stomp some humiez! Should make for a good dust-up with the Imperial Guard and a few Titans.

For fun, I checked the GW site for how much it would cost to acquire one today. Only $42 US for a Gargant! Needless to say, much better to find one in the basement.

While I was visiting the GW Web site, I thought I would check the other Epic 40k models, and was floored by just how much the Epic 40k stuff is starting to cost. The Gargant is a great deal compared to the criminal price of $23.75 US for TWO, count em', that's TWO, Wave Serpents. So putting your detachment of eight Eldar units into Wave Serpents for Epic 40k can be done for just about $50 US! What a GREAT DEAL.

It is actually cheaper to order the resin Epic models from Forge World!!

No wonder nobody plays Epic anymore...

Great job on the Gargant!

Awhile ago I costed out an Epic Eldar force: a couple of scout titans, skimmers and some Aspects. Very pricey. I'll look into the cost of the resin vehicles...

Dave - you can also check "Chaos Orc's Superstore" - they tend to have repositories of used stuff, including resin epic Wave Serpents.

I have ordered from there, but the results were mixed...so proceed with caution if you do.

The Epic models seem to be disappearing from Forgeworld at the same time (perhaps a logical business decision, given that GW appears to want to price Epic out of existence).

Great looking Gargant!! Would be an awesome ground target in an Aeronautica Imperialis game!

Hey - yeah...cool idea. In one of the Epic rule books, there is a picture of a gargant "under construction" - maybe we could do some kind of "Gargant Repair Yard" (or more likely - "da big git yard") that Imperial bombers are taking out...