Yet another surprise in "The Pile"

Another gem recovered while rummaging through the pile in the basement! An Epic 40,000 Imperator class Titan: 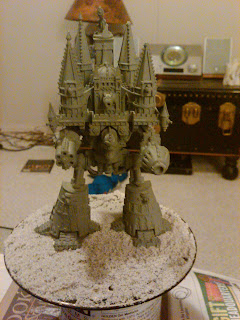 I don't recall the specific Epic box set that sold you this monstrosity, but I think it was issued around the sunset of the good times in Epic (i.e. before GW started to strangle it, then notice sales weren't going, so they started to shut it down and made the cost of a detachment of aspect warriors mouned in Wave Serpents approximately equivalent to a mortgage payment).

I must have acquired this sucker in an irresponsible Ebay transaction of some kind. These things fetch stupid prices these days, but it was a bargain because it was already assembled.

I mounted this on a blank CD for a base...not sure how that will work, but it was handy. Now to paint the sucker....
Posted by Greg B at 1:25 PM

What the heck else do you have in that basement?

I have Heavy Gear figures in there somewhere, plus 10mm moderns...possibly a garbage vortex...

Oh - and a river steamer for the Sudan!! Not sure where I'll get going on that...

At Gencon several years ago, I remember seeing Mike Biasi (formerly of Armorcast) working on the master for one of these in 28mm scale for 40K. It looked like a child's costume.