Project Trafalgar
Last week I found in my e-mail box a nice invitation from Greg to contribute to this blog. I could not refuse and I don't want to be just a lurker. This is my first blog entry ever and I would like to talk about my new painting project for 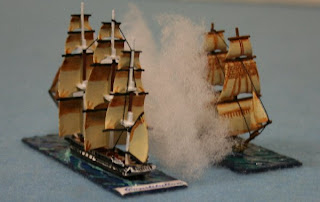 2010: Trafalgar. Last year, I bought a copy of copy of the new set of rules published by Warhammer Historical about the age of sail. It's a period I was always interested in but never dare start collecting models. Now my plan is to have enough ships by December 2010 to recreate the famous naval battle.
On this picture, the U.S.S. Constitution talks to the H.M.S. Guerrière through the mouth of her guns.
My first step was to choose a model maker. I wanted miniatures with enough detail to look good on the table, so Langton and GHQ were shortlisted. I soon realize that the superb Langton models, for some of their items, require assembling each sail separately... So maybe I'll buy a few models at a later date, when I feel I need an outrageously super detailed sailship to impress my opponents. GHQ seemed a better (and more convenient) (and cheaper) option.
So the second step was to order a variety of models from GHQ to get a better feeling of what is available. Although the company catalog list 25 different sailships, I discovered th

at sometimes the same hull is used with a slightly different set of sails. Oh well, at 1/1200, the color rather than the shape of the hull is what matters anyway. On the picture, you can see 14 different ships from the GHQ selection. I also decided to buy full sail sets models instead of battle sail because I prefer the look of the latter. I've seen many paintings and models of sail ships with pure white sails, but I've decided to paint my miniatures in cream tone. It gives the feeling that the ships have been at sea for a while and it creates a better contrast with the white masts of the American frigates.
These four models are the

latest additions to my collection. I just finished putting the gel on the bases last night. From left to right: a small merchantman that I christened the Nonsuch :-); a large merchantman, the Beagle; an American frigate, the U.S.S. Constellation, and the U.S.S. Constitution, the American super frigate. Now that I have painted a nice variety of ships, the third step is to focus on those ships I need for the battle of Trafalgar. There were 60 ships of the line at the battle, and I have 6 so far. In the meantime, I will hone my naval skills with smaller scenarios.
Cheers,
Sylvain
Posted by Sylvain at 6:33 AM

Very cool ships. I, too, like the cream coloured sails. Nice contrast.

I look forward to reading future battle reports of the scenarios you play.

I can't imagine assembling seperate sails on models of that - or, frankly, any - scale.