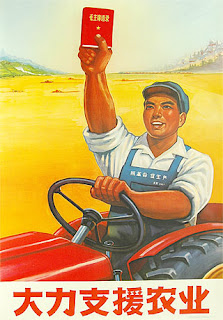 Captain Tewl of Lazy Company, the 869th Cadian Timeservers, part of the Toxo IV defence force, reported overwhelming success on the defence lines against yet another attack which ocurred on New Years Day and involved military forces who at first appeared to be servants of the Chaos God Nurgle, but were in fact over-active teenagers wearing green who had consumed too much "Toxo Special" the night before. 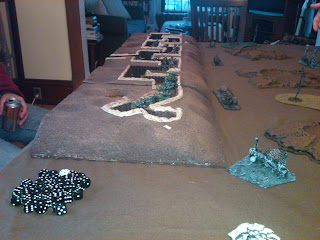 Renegade forces cower in their trenches - they should have stayed there...

Intervention of a Ravenwing Space Marine force proved completely unnecessary, but at least sped up the destruction of the fake Chaos forces, which included bogus Terminators, "Chaos Space Marines" wearing armour made of cardboard and showing no sign of the endurance typically conferred to the followers of Nurgle, a Chaos dreadnought which appeared in hindsight to be a green erector set with mud stuck on it, a "Predator" and a couple of "Rhinos". 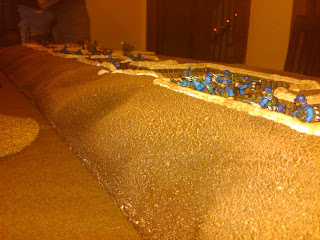 All imposters were destroyed at minimal loss for the heroic Imperial force. There was, however, no sign of the fake "Typhus" persona who had been causing false alarms in the sector last year. 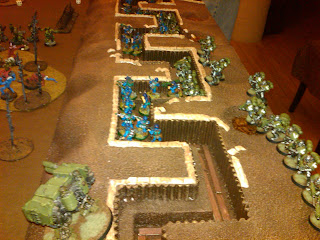 Thanks again to Dallas for hosting a New Years game, not to mention forgetting about the cheesy special rules that apply to Nurgle Marines! Mike F's Marines looked great, and so did Dallas' renegades (at least until Mike and Cam blew them away). Hopefully Dallas can add a couple of more pictures - the slaughter of the "Nurgle" side being so complete that were barely able to capture images of them...
Posted by Greg B at 1:20 PM

Serves me right for bringing out "Rhinos" that were actually just repainted Ford Escort wagons, and a "Predator" that was actually a Kia Rio with broomsticks for gun barrels.

Where's "Typhus" when you need him??