After a brief diversion I am back to my Horus Heresy project. Here is a heavy support squad from the World Eaters legion.  The Marines are armed with multi-meltas and are wearing Mark III power armour.  The figures are from Forge World.

In the Legion army list, the heavy support troops must all carry the same heavy weapon (I'm pretty sure that is different from the "current" Space Marine lists for 40k).  I thought the multi-melta suited the character of the World Eaters legion.  Besides, five multi-meltas would really dish out a fair amount of abuse.

As an experiment, I tried something that I haven't tried for over ten years - I primed a model in white.  It worked out OK, but at the end of the day I'm still stuck on my black-priming ways, and the balance of these figures were painted using the black Vallejo surface primer.

The white is a base of GW Celestra Grey, washed with GW Nuln Oil, highlighted with more Celestra Grey, GW Ulthuan Grey and then GW white scar. I used decals from the excellent Forge World decal sheet for the World Eaters.

After the paint and decals were set, they received a pretty health dose of weathering - sponged chips and some weathering powder for good effect. It keeps the white armour from looking too formal - I prefer to see the World Eaters marines as pretty worn from continuous action.


After all the weathering, I did a final highlight using GW Nuln Oil as a pin wash, trying to add some depth to the rivets in the armour and the many lines in the armour plates.


These Mark III armour suits are slow to paint - the armour plates have a lot of detail, and there are a lot of segmented plates, particularly on the back of the armour.  Finishing these guys took forever (at least for me) and so far I only have 15 marines finished in total since I started the project earlier this year - not a very rapid pace for me, but I'm starting to get into a groove with the painting for these guys so I hope to pick it up. 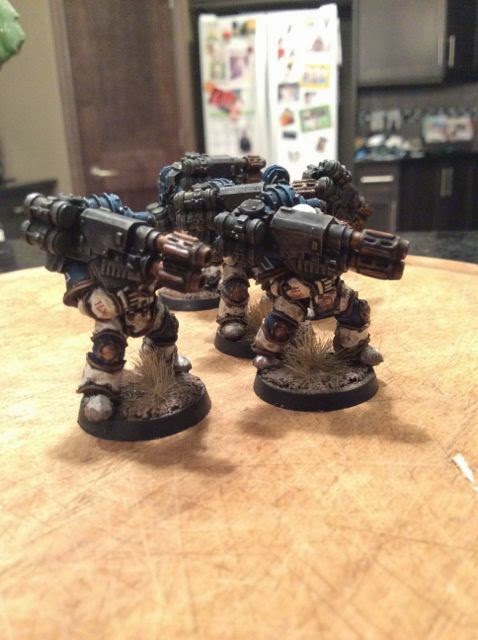 I have another 25 or so World Eater marines to paint - and then it will be on to the Sons of Horus!

Those look great - as always! Looking forward to the huge HH game this fall...

Very nice - the weathering makes them look even more menacing.