As you all know by now, Greg got sucked into what he calls Legional Lunacy and is creating a Warhammer 30k army. As he mentioned in his post, insanity likes company, and so raving like a lunatic, I followed his decent into madness and placed a small order for some Forge World 30k marines.

I say small, but really any Forge World order adds up way to fast, and sucks your wallet dry, so be warned!


All the warnings aside, the Warhammer 30,000 universe is amazing rich is history and feel.  Maybe even more importantly the Forge World models are AMAZING!!!!  You pay for that of course, but they are really really nice.  What is even scarier though, is that as expensive as they are, when you figure out the cost of GW plastic figure, the Forge World ones are really not that much more. Which is really scary for the detail difference.

A good example can be taken from the GW Chaos Terminators which are $60 while the resin 30k ones from Forge World come in at around $70 by the time you get them here.  I point this out only because at one point in time Forge World was so expensive compared to regular GW product.  It looks like GW figured that out and closed the gap, thinking if people would pay that much for Forge World they would pay it for GW plastic.  Now that they are so close, it's almost not worth buying the plastic.  Mind you both are priced about double what they should be, but that's a whole other story.

OK, back to the actual Legion Project....


Since I have a Nurgle Chaos Space Marine army for Warhammer 40k, and really like how they play (even if they are not that competitive given the crazy meta of the tournament scene) I figured I would stick with their original pre-heresy chapter, the Death Guard.

The Death Guard are a staunch force that marches into battle in a direct and unforgiving way.  They ignore losses and march straight ahead having faith in their toughness and determination.  In the Horus Heresy books there is one Captain that loses a leg yet still tries to go ahead in the fight.  Now that's tough.


The Death Guard also do not believe in ornamentation and kept their armour almost entirely plain ceramite.  There are several different paint schemes out there for them that describe and show this.  They range from essentially white to grey to bone colour.  Some have only green trim around the shoulder pads, some have steel, some have brass.  Some show the shoulder pads white, some green. 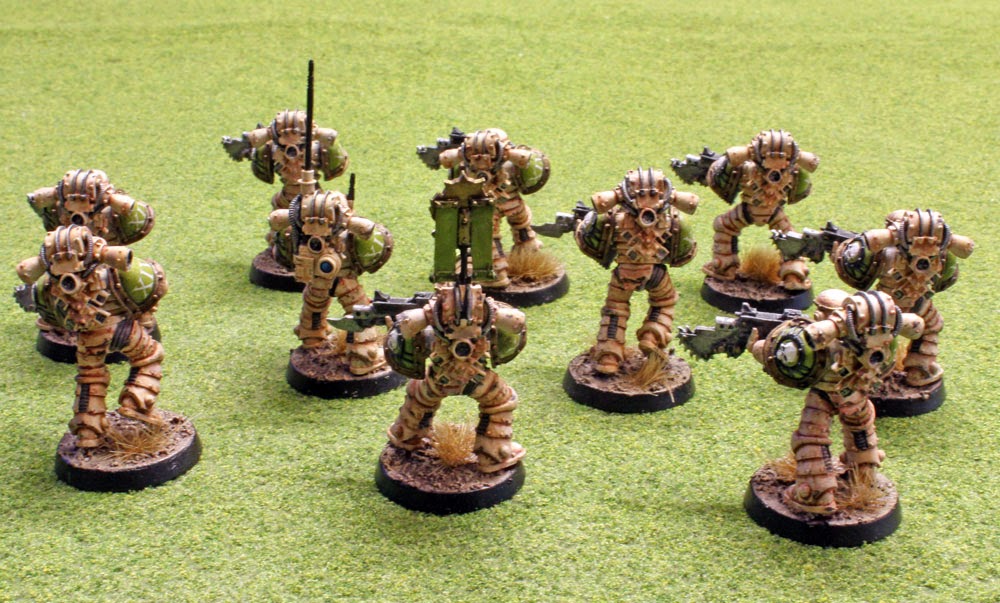 Besides the fact the Death Guard are not ornate, I also wanted to show the grittiness of the Horus period.  This is in fact shown for almost all of the Horus era stuff from Forge World in all of their paint schemes, which is awesome.  This was a period of war.  Marines went into battle and were stuck there for weeks at a time, the armour was not shiny and new, it was gouged, scratched, chipped, rusted, and worse.  This is completely counter to the normal shiny and new GW look of Space Marines in the 40k universe.

As for Greg's comment and madness liking company, I fully support this idea and would like to help my infecting other members of the group with this lunacy.  If it helps, we fully plan on NOT using the currently very broken 40k rule set, and instead using the excellent Chain of Command rule set.  So, jump on in everyone, that water is fine!

In fact, I already have one convert.... my friend Steve Brown has joined in and has placed a small order for some leaders and a breacher squad.  He has also already completed one test model using some older looking plastic pieces, just to see how his colours work.  I am damn impressed!

Oooh, I love Death Guard. I try to paint my "contemporary" 40k Death Guard as if they had white unadorned armour but it is now stained and fouled but still showing the white underneath.

Great work Byron! Those Death Guards troops "look the part" - outstanding job. I am now wishing I had used the back banner with my guys...one of those things that seems a bit too silly, but looks great actually done up...

Lovely stuff Byron! I like that while they are wonderfully grimy there is not a tentacle or septic pimple in sight (how refreshing).

I have some mods to discuss re: Chain of Command for 30K but more on that later.

As for myself, I sold a kidney and so I'm in with Mechanicus (ordered and on their way). 'For the Glory of the Omnissiah and the Machine God!'