I love the NHL playoffs, and I love the long weekend.  It's a good combination to get some serious painting done, and this past Easter weekend went very well.  I am finally getting a bit of momentum building up on my Legion Project, and a few other bits besides.  For this post here is a second 10-man tactical squad for my World Eaters Legion troops.

As with the other tactical marines, these models are wearing Mark IV power armour - the version of the Space Marine armour issued shortly before the Horus Heresy began (cautionary note - "shortly" in the Warhammer time frame could still mean like 100 years, but you get the idea).  They are carrying "Tigrus Pattern" bolt guns.  One marine is upgraded to carry some coms gear.  All of the models are from Forge World.

Painting the white armour has been slow going, but I'm finally getting in a bit of a groove with it. I also used decals here and there from Forge World's excellent World Eaters decal sheet, and used some weathering powders from various sources (I think they may have been Mig brand) as well as a sponge with some GW Stormvermin Fur to scuff up/rough up the armour. 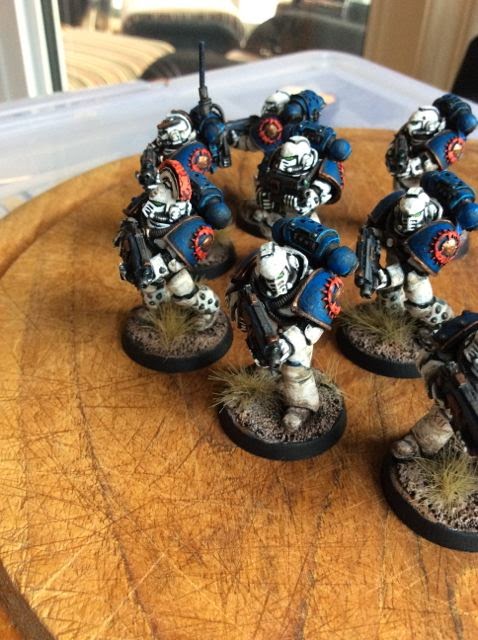 As Byron mentioned in his post showing his excellent Death Guard (check them out - they look great), these Forge World models are far from cheap, but they are a lot of fun to work with.  Compared to the current plastics, they are a little more spartan (fewer skulls, eagles, badges etc) and look a little more uniform without being all exactly the same.

Some 40k players like to make all of their marines individual - the results are often beautiful, but I don't see the Space Marines as too individual.  In fact, the process of their creation - an entirely new set of genes, hard core mental conditioning, new organs, skin upgrades etc - seems specifically designed to eliminate individuality.  The individual Space Marines vary only in their specific approach to eliminating the Emperor's enemies as soon as possible (bolter? chain sword? heavy weapon?), their length of service, and the extent to which they brood about their job.
So I like the tactical Space Marines to look a little plain. Not identical, but a little plain, and Forge World sculptors delivered.  Markings? Sure. A fancy helmet for the officer? Sure.  Embossed chapter symbol on the shoulder? Well, yes - after all, there are standards to be maintained :)  But I like to save the ornate stuff, extra sculpts of eagles on the shoulder plates, artificer armour etc. for the senior officers and elite troops.

A Legion tactical squad has only bolt guns for armament - I think you can give something a little fancier to the Sergeant, but otherwise these squads rely on other units for support weapon fire (like, entire squads of support weapons - a little like the Eldar).  You can increase the squad size to 20 marines if you like! With the "fury of the legion" special rule, they can put forth quite a lot of firepower even without the special weapons.  This relative inflexibility reflects the Legion period very well - when your overall force is 100,000 Space Marines, 20 of them would seem like a very, very small group after all.

Up next I'll have some more Legion progress, and some continued 15mm WW2 painting.
Posted by Greg B at 7:41 PM

Love the look you gave to their Mk. IV armour. Used but not too scruffy.

I agree, I like the "older" but less-cluttered, more modern-looking Legion armours; I have a (yet unassembled) squad of the Legion Tartaros Terminators.