My 28mm scale Commies have some new wheels tonight after I finished off one of the new BTR-80 models I have recently purchased from Imprint Models. I only finished one of the vehicle bodies, but finished one of each turret - the BTR-80 and BTR-80A variant - to give a look for each one.

From a wargaming perspective, the BTRs are not as sexy as the BMPs, but these blue collar APCs will stylishly and safely deliver my Commie Forces to battle against insurgents, separatists, NATO forces, Zombies, Big Pharma, militants, reality show contestants, and whatever else we can find at the Fawcett Avenue table - possibly all in the same game (Dallas' Zombie games are very diverse). The 30mm cannon on the BTR-80As will provide some nice extra punch.

These were painted primarily with GW paints, many from the new range, which I am gradually getting used to.  I have seen so many different camouflage patterns for modern Russian/late Soviet vehicles that I just went ahead an made one up. The infantry in the pictures are 28mm Soviets in NBC gear from Eureka.  The numeral decals are from a sheet of Battlefront tactical numbers I found lying around.

Up first is the straight-up BTR-80 version: 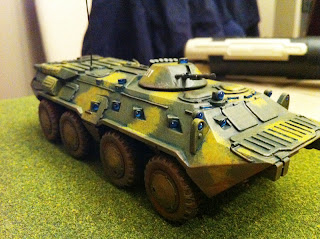 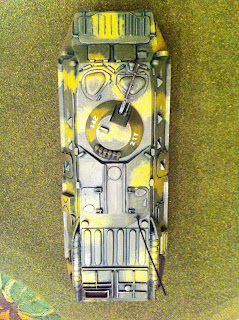 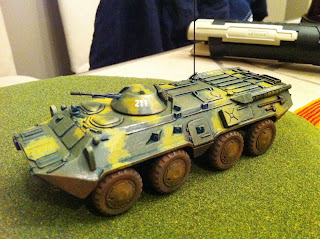 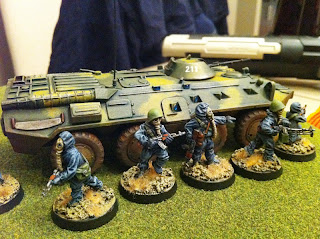 Now here are some pictures with the very cool BTR-80A variant turret.  With the funky mounting for the 30mm cannon, and the concentration of smoke launchers, all with the spooky light at the top, I find this turret looks very near-future/sci-fi. 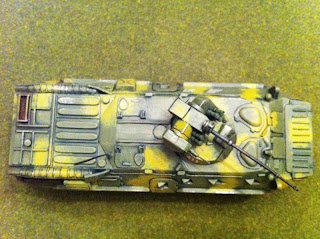 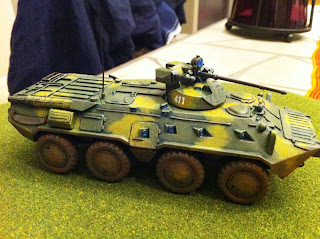 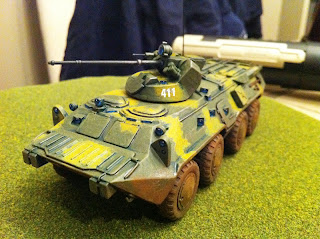 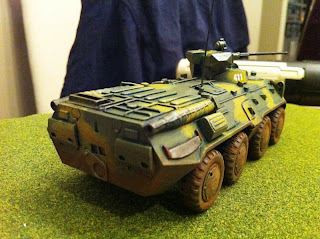 These Imprint models are top notch - I recommend them highly!  I have two more vehicle bodies to do, and then I will be able to mount a platoon for battle.  The T-90s will have to wait for a bit - I need to figure out a way to secure the turrets - preferably without gluing them, although it may come to that - to be sure they can survive on the gaming table.
Posted by Greg B at 11:19 PM

Very cool Greg! I really like how these models turned out. The 'fictitious' cammo works really well and that auto-cannon turret (with all the fixin's) is especially impressive.

Real great results there. And I do not think that the camo looks too made up. I have seen some BMP-1s in a similar camo, so you are fine!

Regarding fixing the turrets... I can only repaet my recommendation from an earlier post... rare earth magnets. I have used them on all my Imprint T-72´s and T-90´s (as well as my Abrams) and they work perfect. You can turn the turret and unless you shake them violently even turn the tank upside down without the turret falling off. Just drill a shallow hole in each the turret (bottom) and hull (top) with an appropriately sized sinker and glue the magnetes in with superglue (make sure they are oriented the same way).

@dhc - the fellows in my group here have been suggesting the same thing, but generally when I work with magnets it turns into a sh*t show. Looks like the best option, though...

I don't know my fake camo from the real thing so it works quite well to me. As usual, very inspiring stuff, looks awesome. Always forward to more, keep 'em coming.

Great work Greg. Love the camo and the 30mm looks like it could put some hurt on my Bundeswehr guys (or zombies for that matter!)

Greg, do not worry too much. There are small locator depressions on both the hull and turret, so the drilling comes easy. I found the magnets with a 10mm diametre and a height of 1-2mm work fine. 10mm sinker / Förstner drlls are easy to find (you can even use a regular powerdrill for this) and you only need to drill a very shallow hole.

On my first Imprint models i used metal pins, which can be fine as well, but the turret will swivel when moving the tank. In due time I want to see if I can remove those pins and replace them with magnets!

@dhc - thanks to your prompting and inspiration, I managed to sink some magnets into the T-90s today using my power drill - which had previously only been used in "1-to-1 scale" projects :)

Watch for painted T-90s to appear on the blog in a few weeks...

I look forward to completing my own Imprint M-113's and MOPP troops, to add to the available forces combating the zombie apocalypse.