Last year we moved to a new house in Winnipeg.  I am now finally getting around to unpacking some parts of my collection from storage (a.k.a. the big pile in a room downstairs) so I can display them on some new shelves. But as we have all experienced, transportation of our gaming figures, particularly vehicles, can be dangerous. I was disappointed to find that one of my BMP-2s from Sloppy Jalopy had experienced a "transportation failure", and was in a few pieces when I unpacked it.
I had painted these vehicles several years ago....2007 to 2008 timeframe, I think.  While I was re-attaching the gun barrel to the turret last week, I thought it would be fun to try and upgrade the paint job a little bit.  I originally painted this model along very "Soviet" lines - everything was a dark, military green - and the treads were metal.  No flash, no camouflage, just green cannon fodder for the front lines.
These vehicles have typically seen action in Afghanistan games - because they are 1/56 scale (i.e. the wrong scale for anything) they have seldom been used in our Soviet vs. NATO games as they appear comically small on the table next to the (allegedly) 1/48 scale Kitech tank models that served as the basis for the original Soviet armoured force as part of our insane modern build-up.
I have been doing some Osprey reading lately, and found many references and pictures to camouflage patterns being applied by Soviet troops to the BMPs in Afghanistan.  I decided to throw a quick cammo  pattern on the tank, as well as some other small improvements.
For cammo I stippled a layer of "Tallarn Sand" from GW's new paint range, and stippled a layer of "Rakarth Earth" (also from the new range) on top of that, before yellowing it again with a bit more Tallarn Sand.  After the cammo was down, I did a lot of black-lining to try and bring out more features on the vehicle.

I painted in the "glass" on the search lights and the vision ports.  These things seldom look like real glass on actual tanks, but I like adding this effect to models as it makes the ports etc. really pop and gives you a clear idea of what they are supposed to be.
I used floral wire to add an antenna on rear of the turret, and repainted the canvas section around the 30mm cannon on the turret, using GW "Snakebite Leather" as a base and "Rakarth Earth" as a highlight.  I also re-painted the AT-4/5 launcher on the top of the turret with a different colour of green from the armour of the vehicle, as many of the references I have seen on line over the years show something similar.

Last step was the weathering powders - as this vehicle is fighting in Afghanistan, I wanted it to be plenty worn, so I was heavy with the dust and rust on the tracks, and lots of dirt over the engine vents.  I blackened the tip of the 30mm cannon as well to give it the appearance of use against the Mujahideen.

I left the original decals I used for the tactical numbers (from a GW Cadian decal sheet of yore) in place, but the weathering faded them out a lot, and I like the look of it. 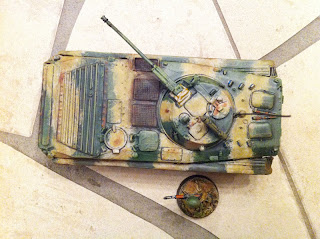 Overall I was very pleased with the results, and it did not take long at all - just about an hour.

Now that I have more vehicles from Imprint - which are 1/50 scale - my Sloppy Jalopy BMPs may yet make an appearance in a game versus NATO or other opponents on the Fawcett tabletop.  I have four BMPs from Sloppy Jalopy - three BMP-2s and a solitary BMP-1.  At some point in the future I may give them a similar re-paint (or something different, perhaps, who knows).  But that can wait for now, as progress on the Golan Heights Project continues....progress report pending very soon on that...
Posted by Greg B at 10:31 PM

I had one of these, too (incidently your before shots looked so much like mine, I thought they had ended up with you). But when HLBS released theirs I sold the SJ one off and bought two of them. Scale wise they fit with Imprint and 28mm minis far better!

Very effective spruce-up, Greg! You're on a roll!

Nice paint job on the BMP - I have the same problem you do - a mix of Sloppy Jalopy and Imprint. It can create some interesting challenges from time to time.

@dhc - I have some HLBS models, and they are gorgeous, but do you really find they fit OK with Imprint? I find the Imprint tanks look a little small next to the BMPs...

Trying to decide on a company, would you send post a picture of both the Imprint and the Sloppy next to each other and a ruler so i can get a estimate of length?

Hi Jim - Imprint does not do a BMP, so I can't help you, but I would highly recommend the BMP2s from Red Star