OK - sometimes a quick diversion needs a bit of an extension.  While rummaging around in my pile in the process of finishing my BTR-80s and T-90s from Imprint Models, I came across an un-built Imprint T-80UK, the command tank variant of this Soviet Cold War era MBT. Since I was on a bit of a 1/50 scale tear, I decided to quickly throw this tank together too and paint it.
This is an older version of the Imprint model, about four years old - fewer metal components, less detail on the tracks.  I had done a platoon of these tanks back when Dallas and I were fully involved in our bonkers 28mm modern build-up. I have no idea why I didn't finish this model - likely I put it down in some place to "get to it right away", then forgot about it as I moved on to some other new insane project.

Although the kit is older - it is still a great kit. Emboldened by my success with the magnets on the T-90s, I drilled in some rare earth magnets to hold the turret in place for gaming.  I also left the cupola open so I could pop a tank commander figure into the hatch.

Mounting the MG was a challenge - I had lost some key parts for mounting it, so I improvised with some spare pieces I had lying around.  They looked like little mechanical mountings - once they are green with the rest of the tank, they look fine.
The Soviet Union/Russia deployed several thousand T-80s in their arsenal toward the end of the Cold War.  They were also found in the armies of former republics (now independent states) like Ukraine and Belarus.  Cyprus also has some T-80 tanks in the line, as well as Pakistan.  The T-80UK is a very late model of this MBT, and I'm not sure how many went into production or into the line of any nation's arsenal.  It features some very complicated anti-ATGM and anti-RPG systems (the Shtora system, as on the T-90).
I painted this tank to match the other recent Soviet/Russian models - dark green with bands of yellow. 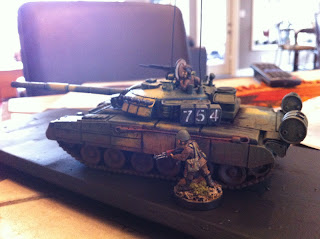 I lost a couple of the components for the Shtora system - a couple of receivers (or something) that were mounted toward the rear of the turret.  But they are pretty minor pieces, so I don't think it matters too much.

This T-80UK will ride along to battle with the other recent arrivals to the Chemical Commie motor pool.
Posted by Greg B at 6:00 AM

You are a machine, Greg! Awesome. I really like this green-and-yellow camo scheme you've worked up for your OPFOR stuff. Beautiful work.

The T-80UK makes a good match for your T-90´s BTW... there are units that use them as command tanks for T-90 formations.

I made the master for this kit and just decided to google it. Great to see your pics. I gather Bob has now sold Imprint...was a good guy to work for. I've just opened the kit he gave me (part of the Pattern Maker's perks along with keeping th original) and am about to put it together and photograph it for a book I'm working on...based on my pattern work for Brooklin Models and Corgi. Just thought I'd share that with you and say great job! Carl Seager