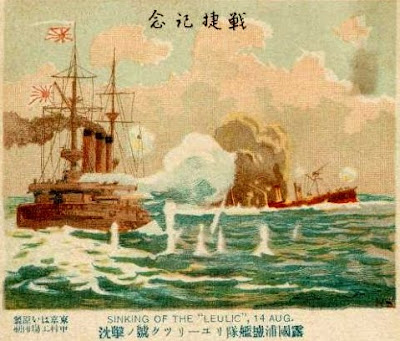 ('Sinking of the "Leulic", 14 Aug.'
Sinking of the Russian cruiser Rurik in the Battle off Ulsan
during the Russo-Japanese War, 1904,
from a contemporary propaganda postcard.)

Taking a bit of a break from my recent near-total immersion into 40K 6th edition, last Thursday I ran a pre-dreadnought era naval scenario, re-creating the Battle off Ulsan, during the Russo-Japanese War.

Historical Background:
The Vladivostok Cruiser Unit of the Russian fleet (made up of the armoured cruisers Rossia, Gromoboi and Rurik and the protected cruiser Bogatyr) raided Japanese sea commerce in the first stages of the war. On August 14, 1904, after failing to rendezvous with the main Russian fleet in the Straits of Korea, Rear Admiral Iessen was heading back to Vladivostok with his squadron (less Bogatyr, which was damaged due to a grounding) when at 0500 he encountered Japanese Navy cruisers blocking his path off Ulsan, Korea. Vice Admiral Kamimura's squadron consisted of four armoured cruisers (the Idzumo, Azuma, Tokiwa, and Iwate), and two older, protected cruisers (the Naniwa and Takachiho).

The three Russian armoured cruisers were of an out-dated design, whose 8" main guns were mounted on the broadside. The Japanese armoured cruisers had their main armament mounted in twin turrets fore and aft, doubling the number of 8" guns able to fire on each side. However, the Russian armoured cruisers were larger ships, displacing approximately 1/3 more tonnage (~12-13,000+ tons vs. ~9,000+ tons). Playing ahistorically, I added back in the lighter ship Bogatyr (whose stats were included in the printed scenario), to add more balance to the engagement.

Models:
All the ships are crisp 1/2400 scale resin models from Panzerschiffe. The ships' 1.5mm thick plywood bases, the splash markers, smokescreens, and the laser-cut compass wind gauge all came from LITKO Game Accessories.

Rules:
I used Coaling Stations, a set of pre-dreadnought naval rules by Rob Heath, available for $6.19 USD as a PDF download from Wargame Vault.

The main feature of the rules is the use of command and orders. Each turn the commander of a division chose a hand of order cards, each one representing an action such as "Fire Main Guns". They had to roll equal to or less than their Command Rate on two dice, to succeed in carrying out an order (here, all division commanders had a Command Rating of 8). For each number rolled less than their Command Rate, an extra order could be carried out; so, with a Command Rate of 8 and a roll of "6", three of the orders chosen could be completed.

The Game:
The 10 cruisers were divided into five divisions of two ships each. The action started as the Russians spotted the Japanese forces at a distance of four nautical miles (40 cm. at this scale). Below, from left to right, can be seen Conscripts Brian (running the two Japanese protected cruisers), Greg and Bill (both running the four Russian ships). Not pictured are Sylvain (visiting from points west) and Dallas, who both ran the balance of the Japanese forces. The photo looks east; the four Russian ships are to the south, steaming north and east, the Japanese ships are located further to the east, steaming towards the camera. I had the Russians set up first. The Japanese set up in response. The Japanese protected cruisers, having lighter armour, are at the bottom of the screen, in a position to hopefully block anything that got past the armoured cruisers. The Russians got first turn. Greg, running the lead Russian division (Rossia and Gromoboi) commenced with a long-range bombardment of Sylvain's Asama, causing no damage (Sylvain rolled hot with his saving throws). The Russians laid smoke, to protect from the inevitable counter fire. Below is an ocean-level view of the action. Below, I can be seen contemplating the Japanese ships after their initial move, the armoured cruisers turning to the north and the protected cruisers laying smoke. Brian had moved his protected cruisers at flank speed, but they rolled a "6" and suffered engine damage, reducing their speed until repairs to the boilers could be made. Bill's Rurik, unprotected by smoke, received damage from the combined fire of the Japanese squadron. Brian rolled boxcars for his Command roll. Not only did this result in an uncontrolled move straight ahead, under the rules this also led to a change in weather. Rolling randomly on a table, fog descended, reducing visibility by 80%! Below, Sylvain points at the lead Russian ship as he brings his Japanese ships into knife-fighting range, in an attempt to bring their guns to bear through the thick fog. Unexpectedly, the Russians also rolled boxcars for command, and the fog dissipated to a light haze. The Japanese took this opportunity to rain 8- and 6-inch shells onto the Rossia. (The amount of "12's" rolled was truly staggering; the weather changed at least three more times during the course of the game.) Below, Greg maneuvers the Rossia in an attempt to break through the Japanese battle line. Sylvain failed his command roll, causing a collision that sank both the Rossia and the Asama! As all the ships moved in and out of fog banks, the Tokiwa came under fire from the Russian squadron. Greg failed yet another command roll... ...resulting in a second collision which sank the Tokiwa and damaged the Gromoboi. Brian turned the Naniwa and the Takachiho south to try and engage the lead Russian ship, Gromoboi, while Dallas continued to steam east and placed more hits on the following Rurik. As the Gromoboi slipped through the Japanese cordon, the Rurik was hammered by repeated hits, eventually sinking. Below, Dallas contemplates his next move while Sylvain (whose crews had taken to their ships' lifeboats) looks on. Brian and Dallas look on in amusement as all the ships moved out of control - everyone had failed their command rolls! Notice the near-collision as the Gromoboi sailed past the Japanese line of battle; she eventually escaped off the table to the north. The surviving Japanese cruisers switched their fire to the Russian Bogatyr. Torpedoes were launched at, respectively, the Idzumo and the Bogatyr. A single torpedo hit on the Bogatyr crippled her, fatally slowing her movement. The Bogatyr's surviving crew kept on fighting and trying to repair their sinking ship, damaging the Japanese flagship, Idzumo. However, the lighter ship could not stand up to the combined fire of the four remaining Japanese cruisers, and finally sank beneath the waves. [Historically the forces never moved to such close range, the Japanese commander continually turning away instead of toward the enemy. The Rurik's rudder was jammed by Japanese fire; it could not evade and was damaged to such an extent that it was scuttled by its own crew. The other two Russian ships (Rossia and Gromoboi) escaped, but were severely damaged.]

All the participants said they had fun. The game played very quickly. The action came down to the wire, being decided just as the last Russian ship was about to escape off the northern table edge.

Thanks to everybody for coming out to play! Special thanks go to Sylvain, who provided sake (Japanese rice wine) for the evening's refreshment.

Looks like a fun game. The card and command roll idea looks interesting but may need some tweaking to get rid of weird results. Another good set of Pre-Dreadnought rules is Fire When Ready available as a PDF via A&A games.

Great game, Dave - lots of fun had by all. One thing I think we'll also want to tweak in future is "collisions", which seemed to happen all-too-frequently considering the size of the ships' bases compares to the "sea scale"... perhaps when bases touch the captains roll their seamanship skill and if both fail, there is a chance of collision...

Thanks for running the game Dave. I had a great time. I agree with Dallas on the collisions, but they did manage to balance out Sylvain's hot rolling for the saving throws on his ships' armour (apparently the Japanese trialled adamantium in this period, unbeknownst to historians...)

Thanks for the scenario, Dave, and to all the Conscripts for a good time. I admit I played out of period by using "kamikaze" tactics to sink Russian cruisers. But the rules made me do it :-).

Peter, I shall take a look at those rules. I downloaded a couple of other rules sets, looking for a way to quickly play pre-dreadnought engagements. I like the command rolls and lack of bookkeeping of Coaling Stations.

The surface scale at 1/3000 is 10 cm. to the nautical mile. An opposed roll like Dallas suggests may be warranted for collisions, since the bases are almost 1/2 a mile wide.

What happens if both sides succeed and avoid a collision? Their ships' bases are still touching...

Dave - my suggestion would be to leave the bases touching, with the situation resolved once the next turn starts...one ship or the other will move off....

Thanks to the Fawcett Avenue Conscripts for an interesting report - am just wrangling with Coaling Stations at the moment with my first Scenario to be Battle off Ulsan. Im using 1:2400 as well - did you double the ranges and movement rates as they suggest in the rules?

Re; the ramming issue - I could see even in a 2 on 2 action I tested the rules with last night that it was likely to come up fairly easily when in close action. Has you had a chance to try using the command rating rolls to avoid it - as per Dallas' post - might give that a go.

Yes, we doubled the ranges and movement rates: 10cm to the nautical mile, 1 knot = 1 cm.

No, I have not tried Dallas' suggested ramming rules, but I shall the next time I run Coaling Stations.

I am thinking of either a re-fight of Ulsan, or the Battle of Chemulpo Bay; I am a fan of cruiser actions.