Another vehicle finished for my Golan Heights Project - a Syrian ZSU-23-4, a 15mm model from Old Glory.  I used the same painting approach as I did for the T-55s from Peter Pig. I did not put any vehicle numbers or marking on this tank, however, as I was not sure where they would have been placed on the vehicle.
This model is nicer than the Old Glory T-62s, but not as nice as the stuff from Peter Pig (although check here for an interesting discussion on TMP about some shortcomings I was not aware of on their older T-55 models - I don't care, I still love them - but I digress).  This model had some nice bits of stowage - tow cables, a shovel, even a camo tarp stashed on the back.  But the quality of the casting leaves something to be desired - there was a lot of flash and bad mould lines.
Far and away the worst feature of the model is the very delicate, impossible to assemble quad 23mm cannons that serve as the focus of the vehicle.  They have the sturdiness of spaghetti and are basically hanging together by a prayer.  I doubt they will survive the first appearance on the table top....on this basis alone, I would not recommend this model to other gamers - but then I'm not sure there are many options out there.
These vehicles formed an important part of the Syrian's very effective air defences in the opening hours of the battle on the Golan Heights in 1973.  The pilots from the Israeli Air Force were not able to effectively counter the Syrian assault - between the SA-6s, SA-2s and ZSU-23-4s, the IAF A-4s were blown from the sky in large numbers.  This would change as Israel gradually reclaimed the initiative and took the battle to the Syrians, but for the first few days, tanks like this one extracted a heavy price from the IAF. 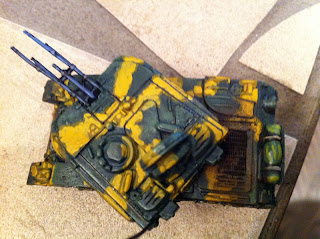 As a wargamer I have always thought the ZSU-23-4 is one of the coolest pieces of Soviet/Russian Cold War kit.  The quad cannons look downright ominous.  I find most gamers imagine using these weapons against opposing infantry and light vehicles, as opposed to the enemy aircraft, and I am no exception - this has happened a fair bit in our 28mm modern games - but I'm sure on the actual battlefield the crew was to keep their eyes on the sky, and not on the ground.

Great stuff, Greg. Its such a neat looking piece of kit. You know, you're probably right, by the looks of those guns it may not survive its first deployment. You might be well-served to replace the white metal guns with steel wire/rod. Perhaps held in something like a plasticard 'cradle'.

Oh, how much I wish someone did this in 28mm!

Cool looking tank. I agree with Curt.. I'd fake up some new barrels with plastic tube or metal rod to save myself the heartache in future.

You've done a grew job on this one. Is there any way that you can reinforce the guns with something (under guise of detail) to make it more gamer-proof.

Thanks guys!
Curt - I think you are correct - some small gauge brass rod and a little chunk of plasticard would make a for a very close look to the weapon.

Very cool looking, but I agree that brass rod is probably the way to go here. If you want to get fancy, I bet you could solder some of the supports in to make the rods look more like the actual gun.