In the Summer of 2009, I bought the newly published rule book Trafalgar at Pendragon, in Winnipeg. A few weeks later, Curt offered to play a game with a few ships he bought. Somehow, I got hooked and I told myself: "I want to paint enough ships for the battle of Trafalgar." This represents over 70 sail ships if frigates and smaller vessels are to be included. So back in January 2010, I candidly announced my insane project. In May, I was about 2/3 done. And now, eight month later, here is an overview of the completed work. 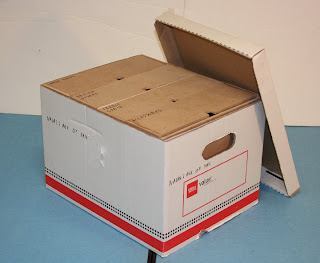 I like to fit everything in a banker box. When the box gets damaged for any reason (water, fire, or even worse: kids), it's easy to replace. After the last ship was painted, the whole collection would occupy the surface of three shelves in a glass cabinet. Now seeing how eight month worth of painting fits neatly into this little box helps me better understand poems written by Charles Baudelaire about the futility of life... 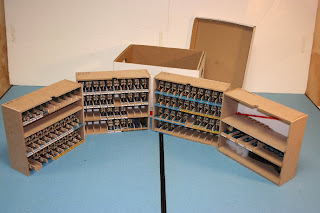 These upright trays were built on purpose to store the ships. There is provision for expansions, in case I want to revisit the Age of Sail in the future. The magnificient vessels of Louis XIV's navy come to mind, especially the Soleil Royal. But if hulls are fun to detail, this modelist needs to take a serious break from making sails. Painting decent sails and rigging the masts consume about 2/3 of the time it takes to make one ship.

Here are some of the pieces from the collection. The H.M.S. Victory has been introduced before. Now behold the Spanish heavy hitters: the first rate Rayo (100 guns), Santa Ana (112 guns), Principe de Asturias (112 guns) and Santissima Trinidad (136 guns). These four giants of the sea combine 460 guns. By comparison, there were a total of 417 guns at Austerlitz. And we are talking mostly about 24 and 36 pounders, not silly 12 pounders or smaller. Anyway, it is unlikely that a Napoleonic land army will neatly line up on the beach to challenge these monsters into an artillery duel. 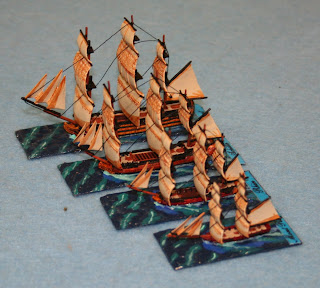 Let's compare the 120 gun Orient, one of the largest sail ship ever launched, to a 74 gun third rate, a 36 gun frigate and an 18 gun brig. Arming ships with more guns often meant to simply add a deck so from the gamer's point of view, a 3 decker does not appear significantly bigger than a 2 decker. Since at 1/1200 it is very hard to distinguish ship classes, the length of the base can serve as a visual clue to the power of the ship.

When you think sail ship, you also think pirates and I could not resist making a few of them. Along the merchantmen Beagle and Hudson's Bay come the Black Pearl (tm) with black sails and the Flying Dutchman, glowing in ghostly green. I thought that if I am to introduce younger players to the game, leading the Black Pearl (tm) would be a lot more appealing than commanding the Polyphemus...

To make the gaming experience more enjoyable, I gathered these accessories:
- Sinking ship markers
- A few boats.
- Movement gages in centimeters.
- Firing gage. The stick goes from yellow to red as the range gets "hotter".
- White smoke to indicate that cannons have been fired and black smoke to indicate fire on board.

My evil plan for the future is to introduce the game to as many players as I can. Then, probably sometime next summer, I will invite them all on a Saturday to a Battle & BBQ (& Bed?) to recreate the engagement at Trafalgar. The game will start at 1:00 p.m. and will end when it ends, however late it goes into the night! One game to bring them all and in the darkness bind them! Mwa ha ha ha!

As for my next project, I have to confess that I can be obsessive compulsive after I set myself a goal. In the past, I have blindly followed insane ideas like: "I am going to collect all the Epic armies!" or "I will build downtown Montréal in 1/300!" (Sadly, ferocious field mice infested the paper made downtown Montréal stored at my friend's place; there were no survivors.) These huge enterprises were fun, but when they last over a year the lack of diversity starts to kick in, especially for my fellow gamers. In the next few days, I am going to complete Curt's commission. Curt asked me for some buildings for the battle at Aspern's church. The church is done and sits unpainted in his kitchen (?). Not long ago, Curt challenged me to build a Warhammer army. If the challenge is still open, that will be my next project in line. I've occasionally painted 25/28mm figures in the past, but never a whole army. So this could be an interesting first for me.
Posted by Sylvain at 4:19 PM

Absolutely beautiful job, Sylvain! (You are a complete nutter, btw.) I can't wait to play our bring-your-own-mallet Trafalgar game. ;)

Sylvain portrays me as some kind of faustian hobby enabler. I am completely guiltless. As you can plainly see Sylvain's neurosis is uniquely his own (a scale model of downtown Montreal, indeed). The fact that I prod/poke/shivy him along from time-to-time is completely unrelated to his manic behavior...

Ask Brian sometime about his model of downtown Winnipeg used for a game of Epic 40K ("Yay, the mayor's house was destroyed!")...

Sylvain, congratulations on completing your project. The ships look fantastic. It was a lot of fun to play with a few. I also like the fantastical additions - the pirate ship especially.

About 18 months ago I set myself four projects in a queue, and I still haven't completed the first one. Who knew modeling and painting 17 Space Marine models would take so long?

Congrats, it is a lot of little ships, but it seems like you had a plan, stuck to it, and pulled it off.

The catalyst for the Downtown Montréal project was a book that my friend MarcV brought back from France. It contained 1/300 paper models of famous Normandy landmarks. We were playing 6mm Cold War by that time. Then I wished there could be something similar about Montréal's landmarks... Anyway, the completed project covered a whole 4x8 table. It won a plate at a Miniature Show. The judges were particularly impressed with the Jacques-Cartier bridge. Later we used some of the building for Epic.

I remember one particularly fun game using those buildings. The scenario was the invasion of Panama City by American troops trying to catch Noriega. But what if the Panama Army had decided to fight in an urban area? The Americans' butts were kicked by the low quality infantry. I remember a cobra crashing in the side of a skyscraper. Ah, fond memories.

Sylvain - that is awesome! It's great to see someone finish the project - an inspiration for those such as myself, who start too many and don't finish enough...