Here's some more photos of our recent games.

First up, the excellent Battle of Hudson's Bay game put on by Conscript Sylvain using the "Trafalgar" rules. Dave V. played d'Iberville and I the British. 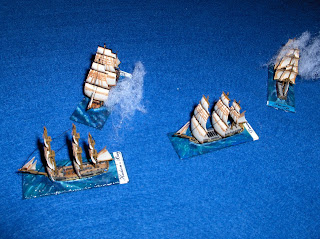 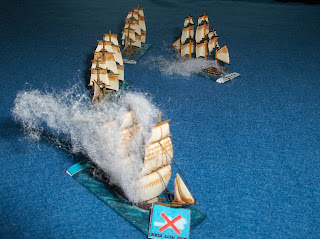 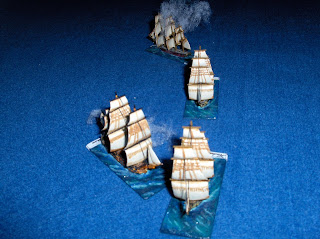 Above we have three different views of Sylvain's beautifully painted ships and impending disaster for me. In my haste to get a devastating broadside on Dave's ship I maneuvered my merchantmen soooo cleverly that my flagship ended up t-boning one of them, reducing it to so much matchwood (best view is the pic directly above).
Of course the other merchantman was sailing in squadron directly behind and could not avoid collision with the wreckage directly ahead. It sank too :-(
In any case, it's all good for the British commander since there were no survivors from the merchantmen to report his terrible seamanship. And we sank d'Iberville's ship... as Gav Thorpe would say "a definite moral victory." 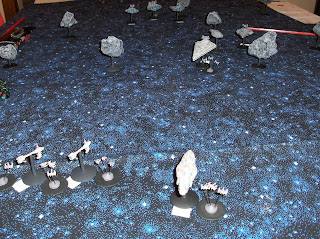 And lastly, a couple of pics from the recent "Star Wars" fleet scale game. I painted some Nebulon B's, Corvettes, and an Imperial transport from Odyssey Slipways, nice models. The asteroids are lava rocks for the barbecue, painted black and drybrushed. Just make sure to wash them first to get all the red dust off! 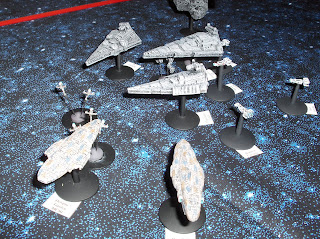 Oh yeah, and Neb-B's are alot tougher than you would think, aren't they Greg!! (Well, when they go up against the "special needs" Star Destroyer, that is)
So now we're caught right up to date!
Posted by Dallas at 8:39 PM

Nice shots of the naval battle. Trafalgar is pretty fun but when 'things go South' they go in a big, big way. Also liked the Star Wars game. The fighters are super-cool. I look forward to playing that sometime when I'm back in the 'Peg.

Oh - I forgot to add that, under my command, the "Victory Class" star destroyer can only meant ironically, given that we were blown away by rebel frigates that look like toothpick containers...

Thanks, Dallas, for the nice pictures of the sail ships. Glad you enjoyed the game. The Star Wars game seems pretty fun. I'm a rehabilitated Star Fleet Battles addict and I haven't done SF fleet action in quite a while. Maybe Star Wars could be my cure...