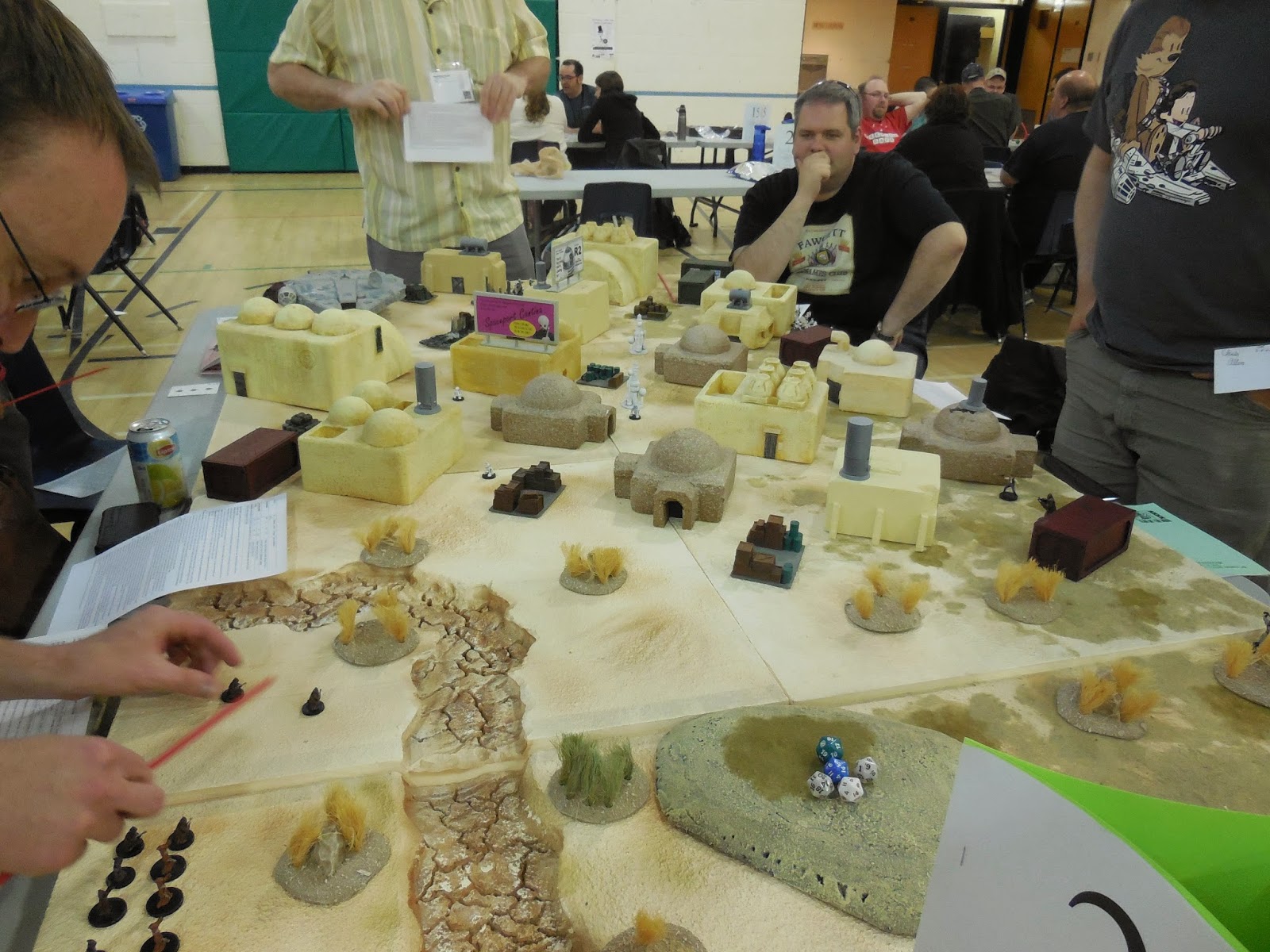 Last weekend, some of the Conscripts rolled out to my hometown of Brandon, Manitoba for Prairiecon XXXV (yes thirty-five). Prairiecon is indeed a "festival of gaming", featuring role-playing games, boardgames, and miniatures games. Conscript Greg and I have run games at Prairiecon for the last several years, and this year was no exception. Greg ran an amazing Suez game set in the Yom Kippur War, and I brought my Tatooine building collection for a Star Wars game. 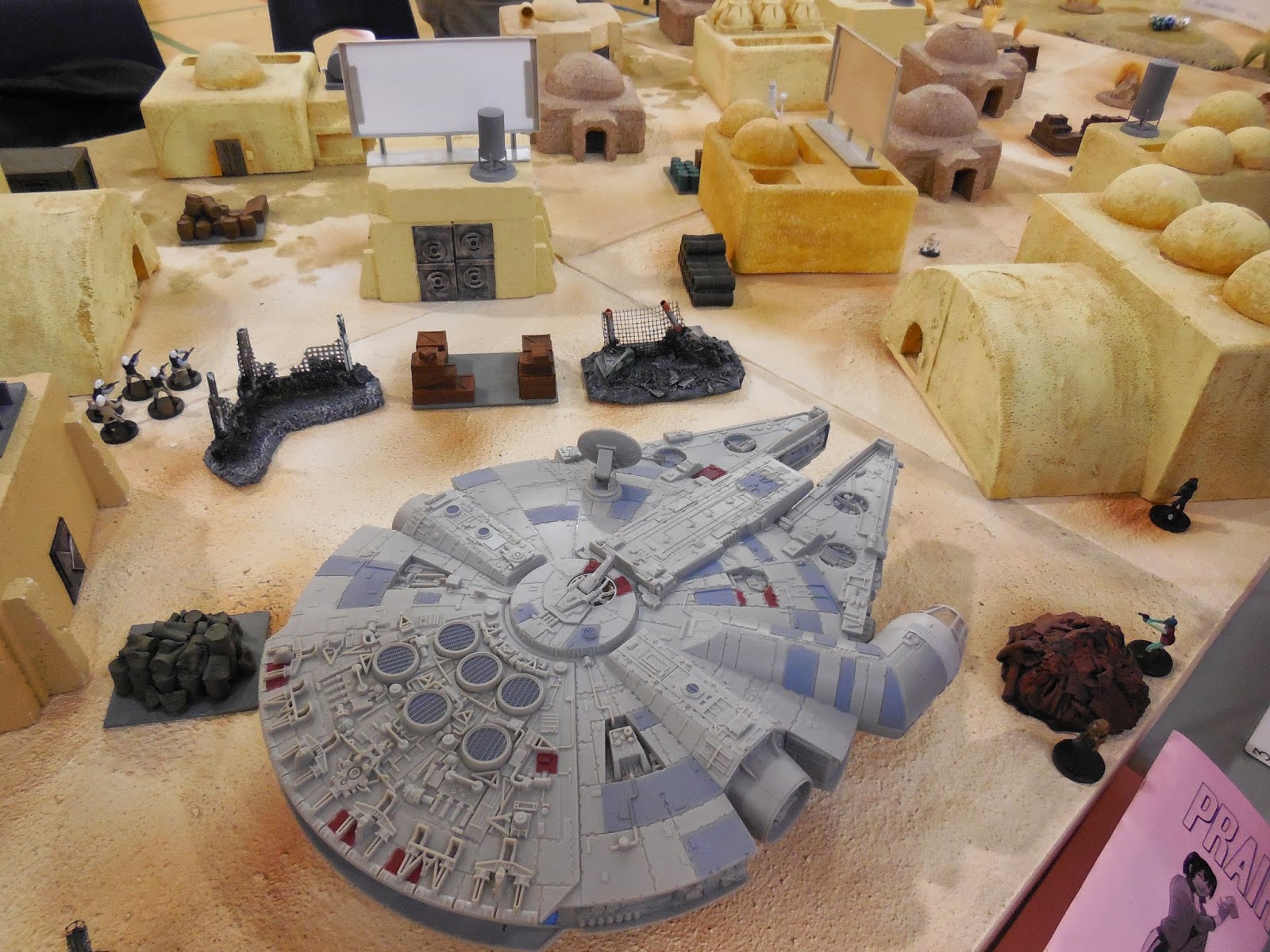 Conscript Frederick built me some more amazing buildings which I brought out. The Falcon here is from Revell, and the terrain tiles were supplied by Greg. 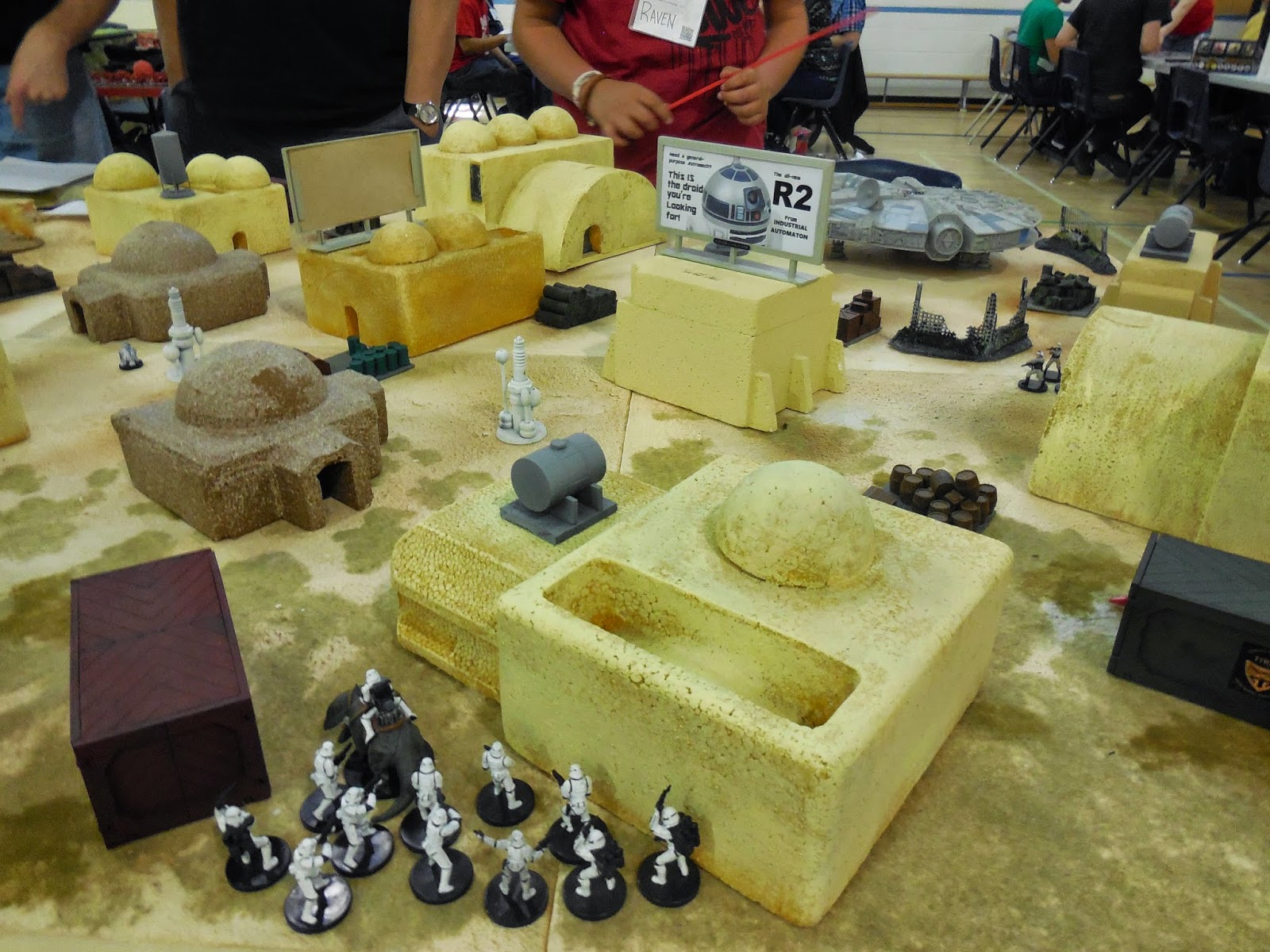 I used the very simple and straightforward "Star Wars Miniature Battles" rules from Wizards of the Coast, as well as their pre-painted figures. The scenario was a typical convention special - each player controls a faction with 2-15 figures and a special mission (or three). In this game, I ended up with seven players and the factions were as follows: 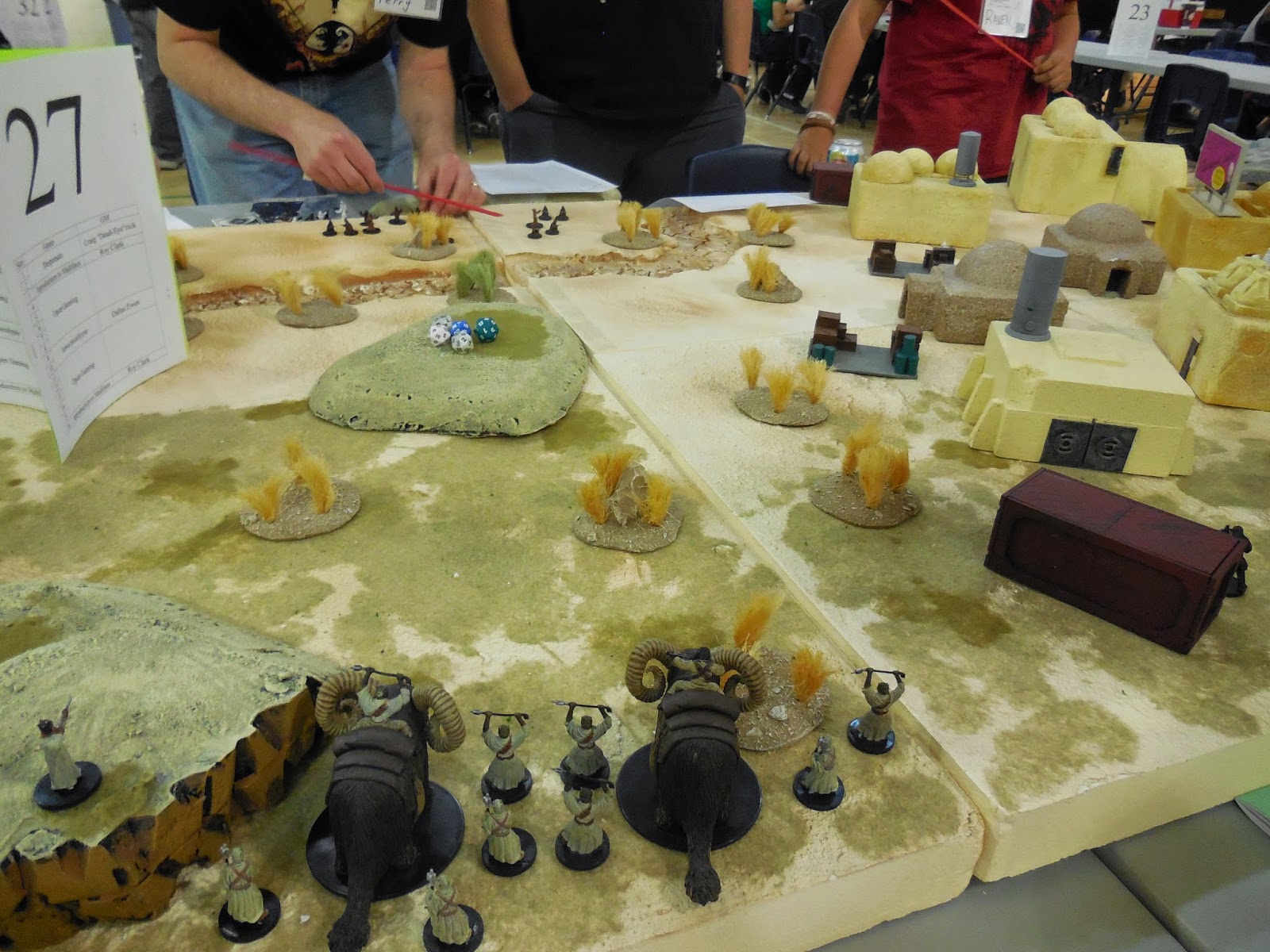 The various factions deployed across the table and carnage immediately ensued, with Perry drawing first blood from the Tuskens with his Jawa sniper. 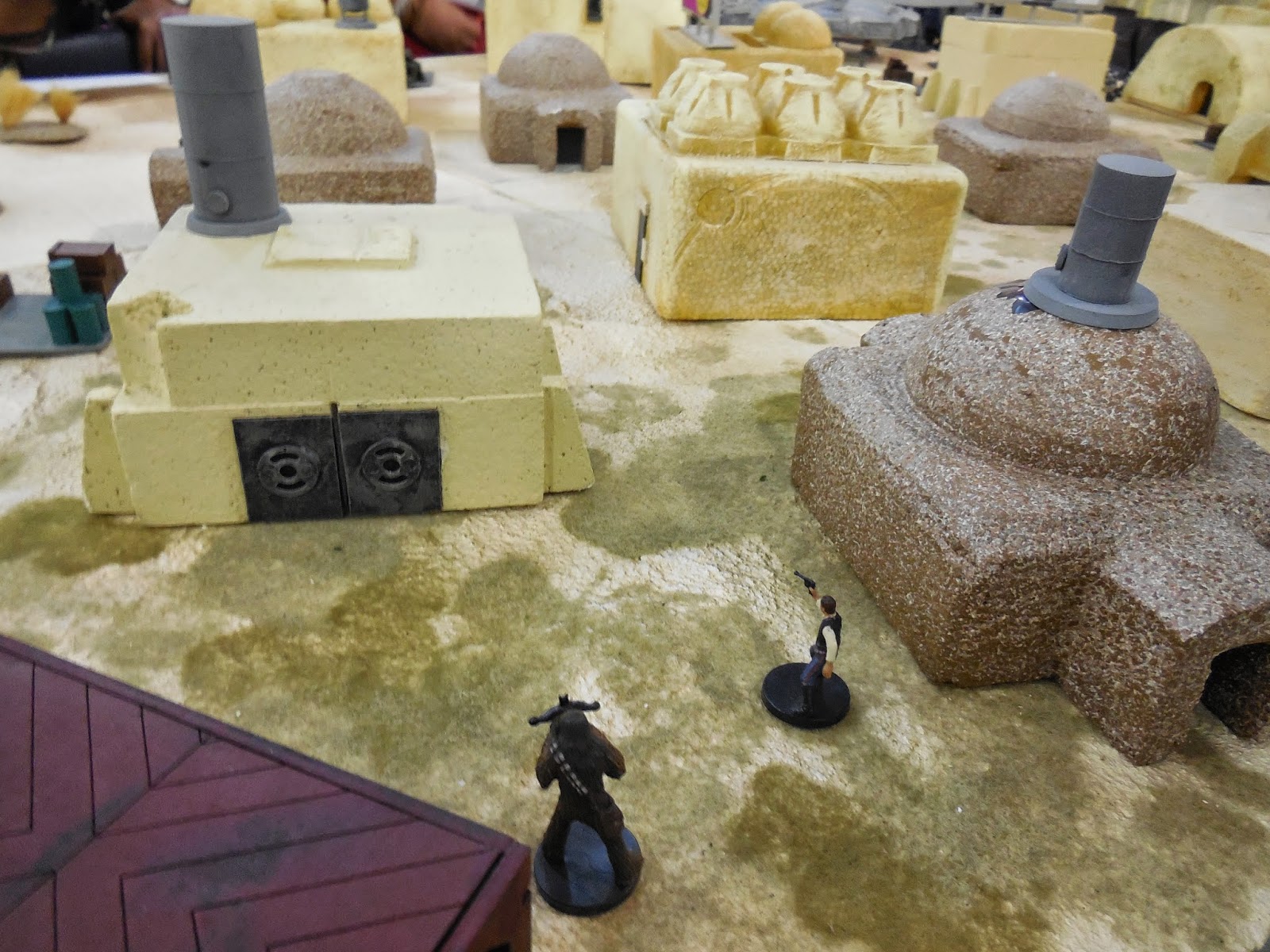 Han and Chewie made their way through town, headed for the Falcon. 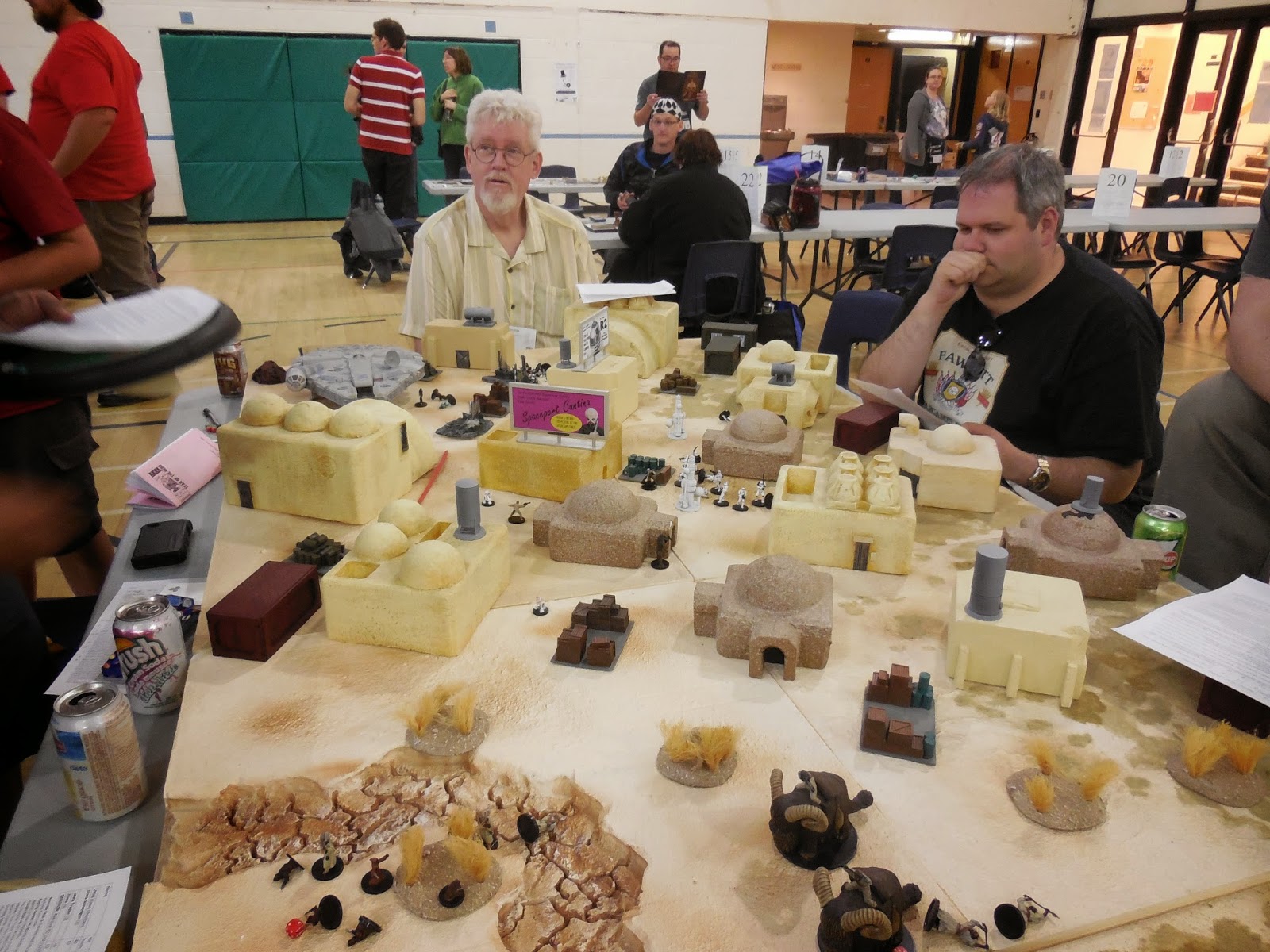 Jim (Rebel troopers) and Greg (Sandtroopers) ponder their next moves. 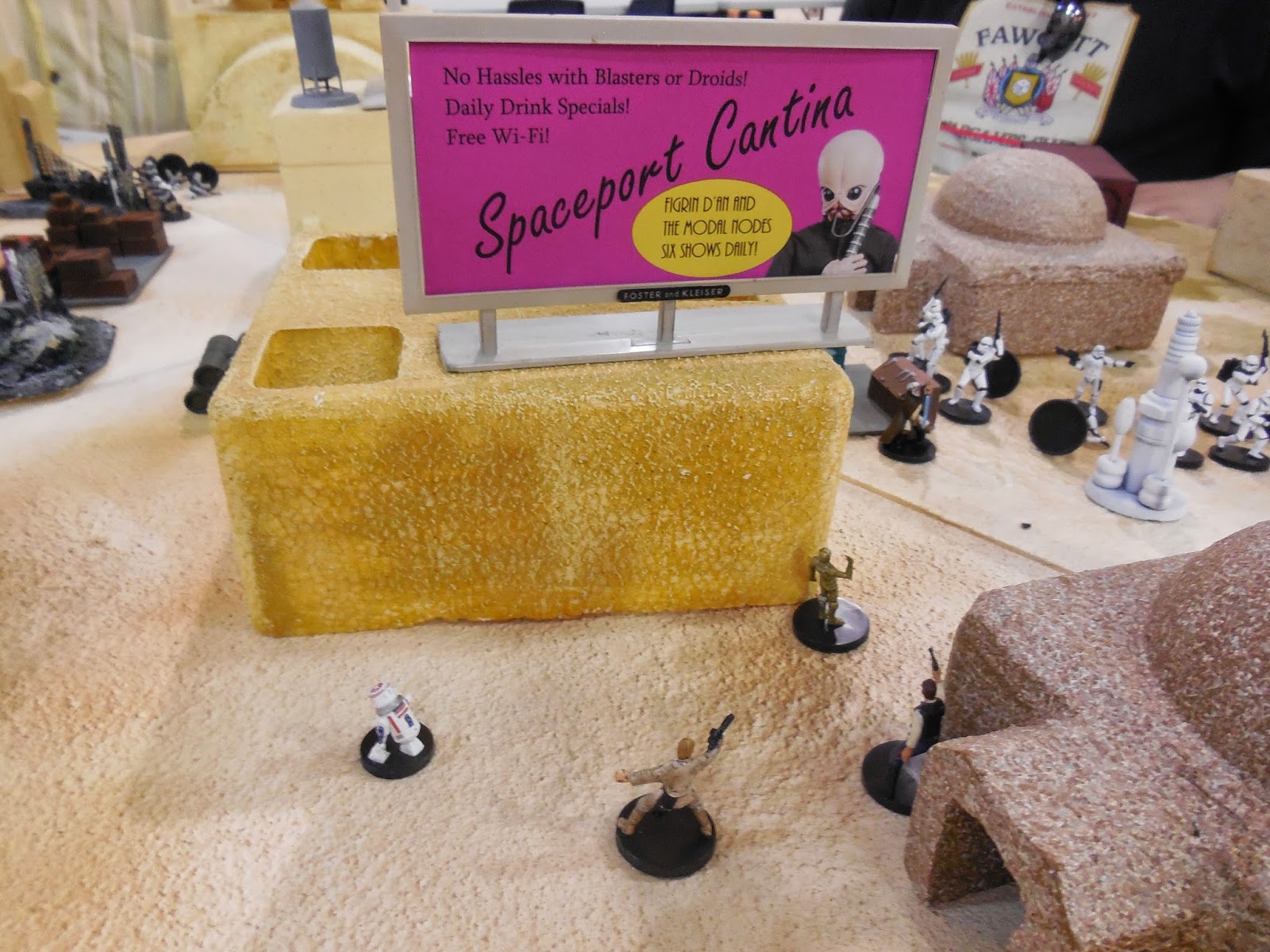 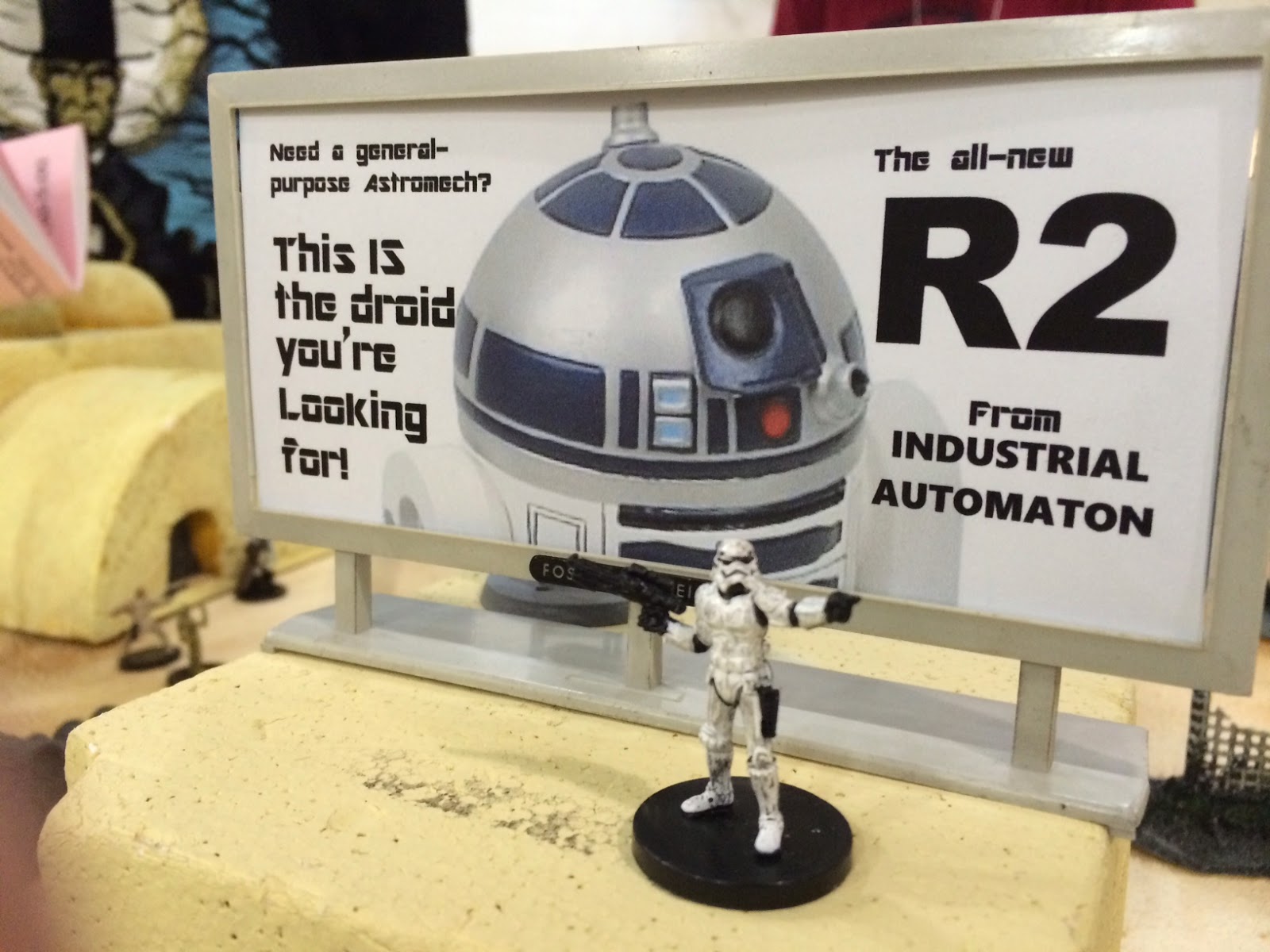 I made a couple billboards for Mos Eisley, just for fun. 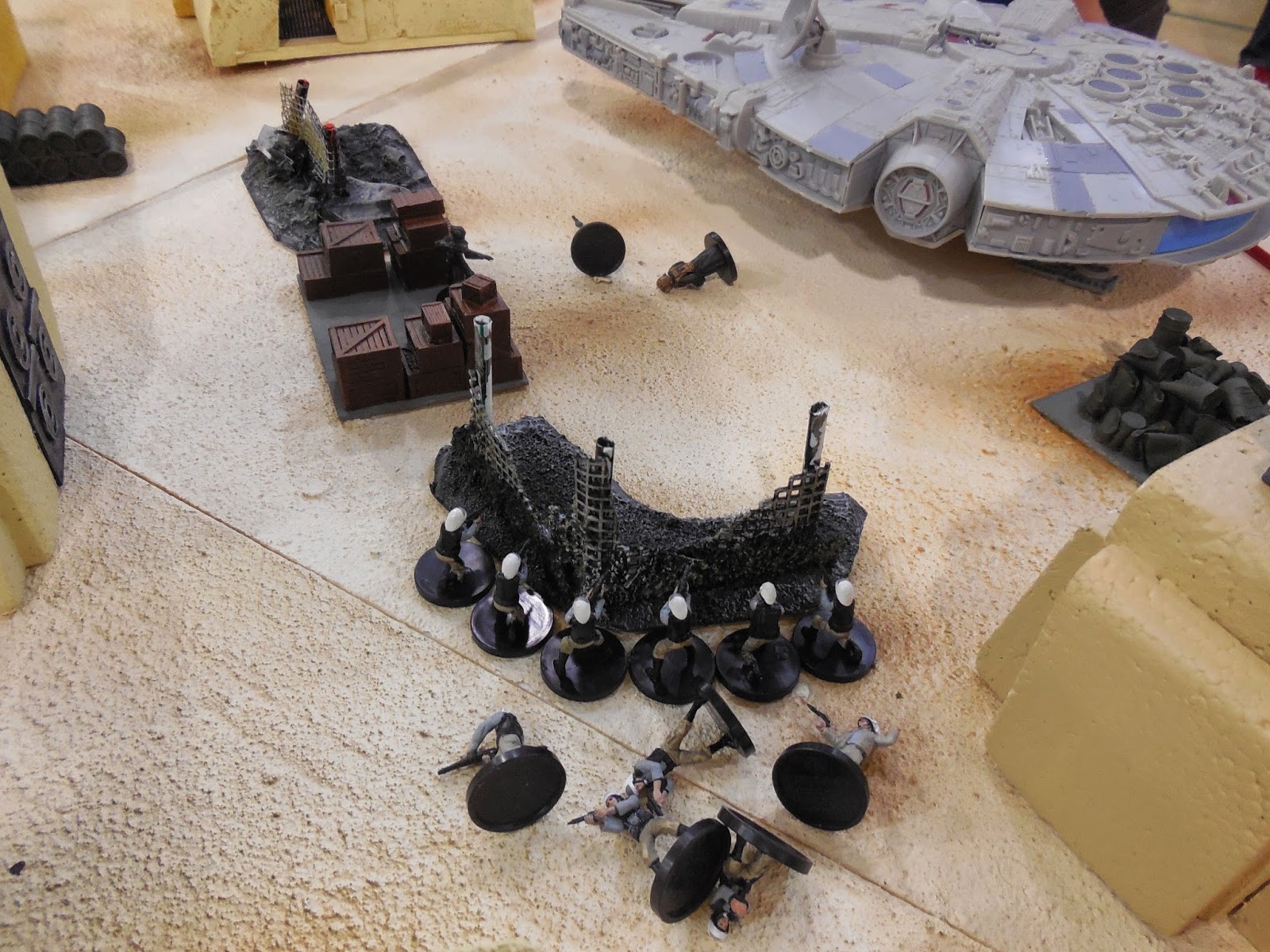 The bounty hunters took a toll on the Rebels, but 4-LOM was finally gunned down. 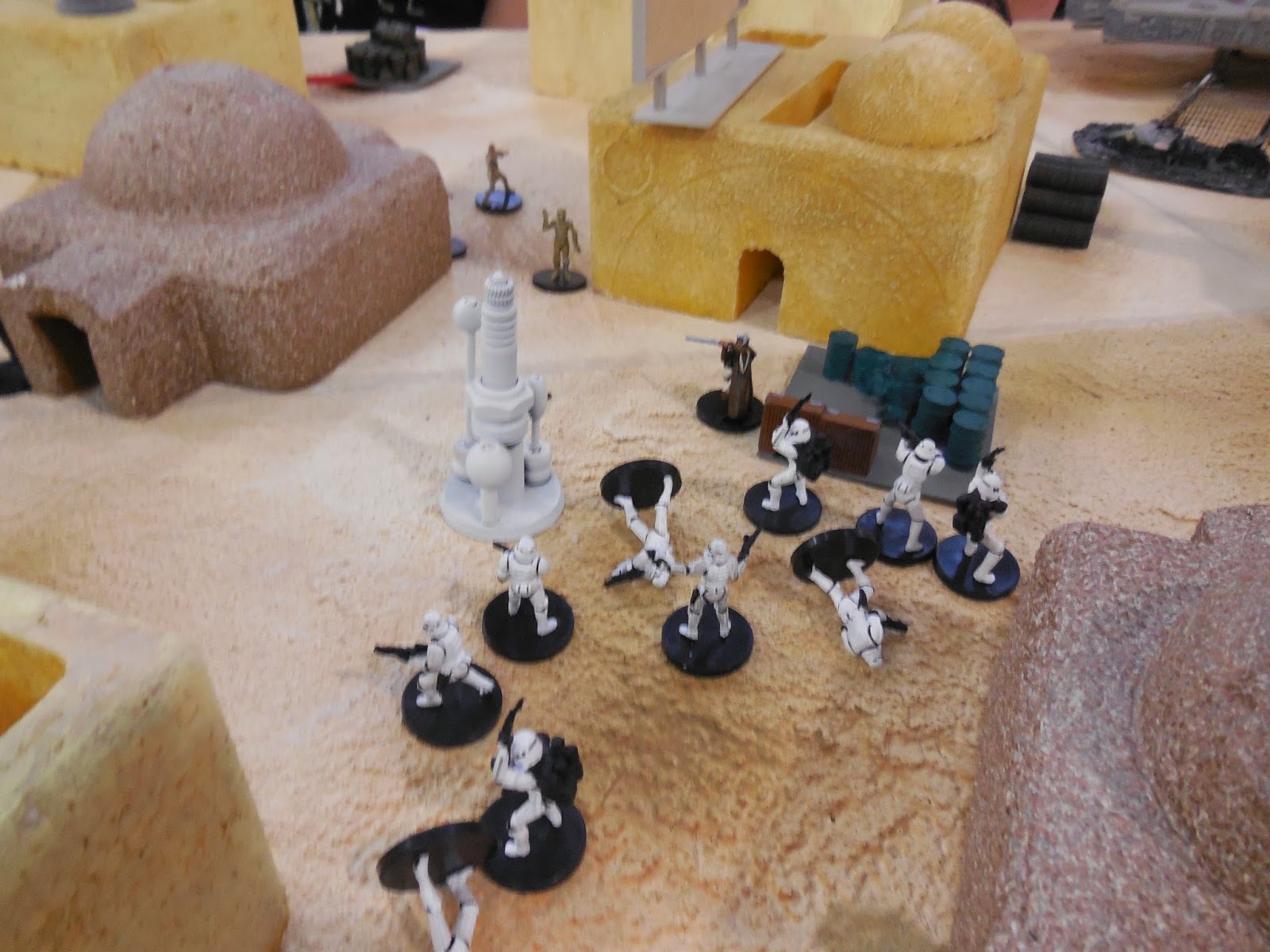 Elsewhere, Ben had lightsaber practice on the Stormtroopers - preparation for the Death Star battle...? 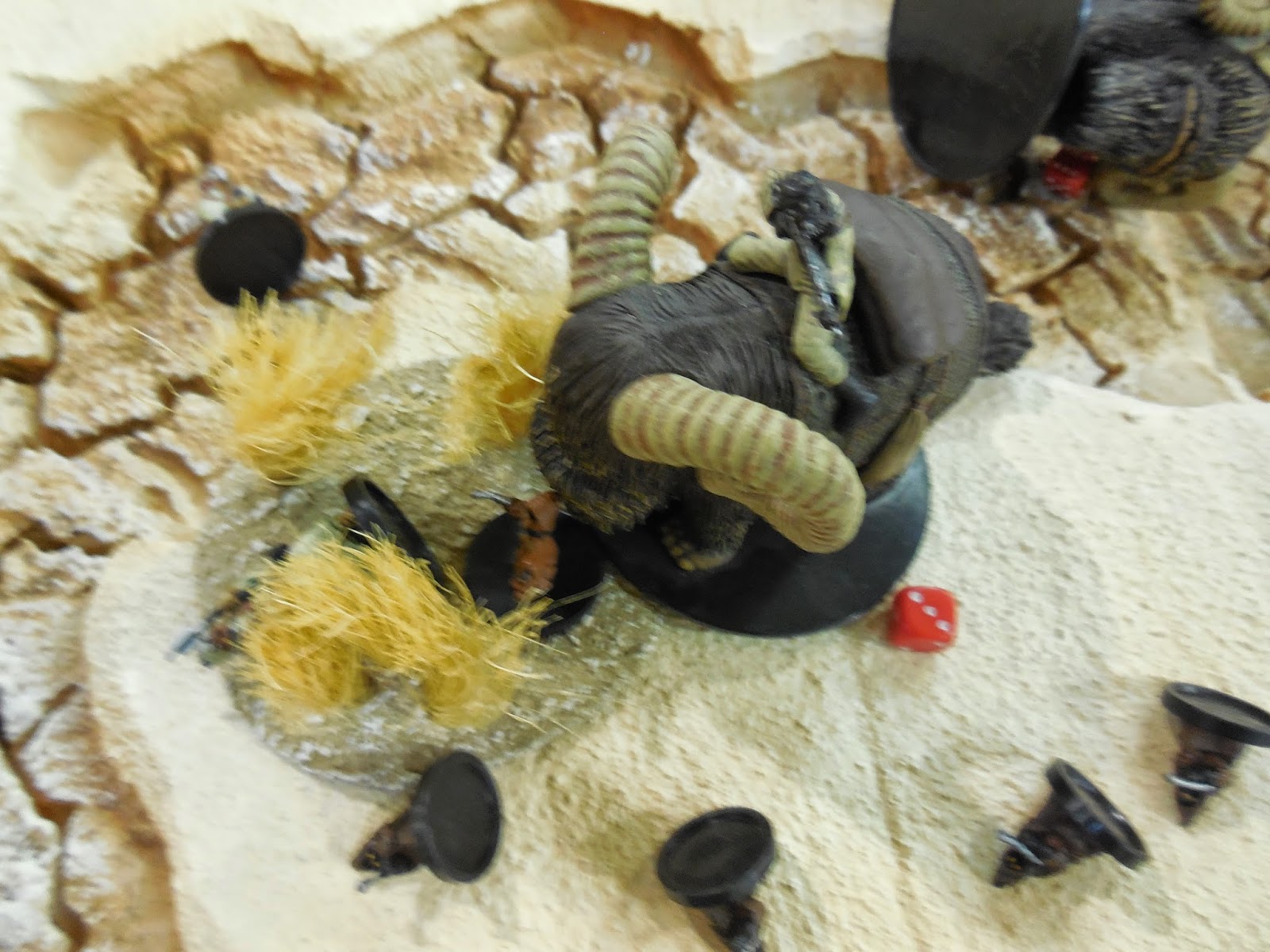 On the Jawa front, the few Tuskens left alive finally made it to grips with their hated Jawa foes... 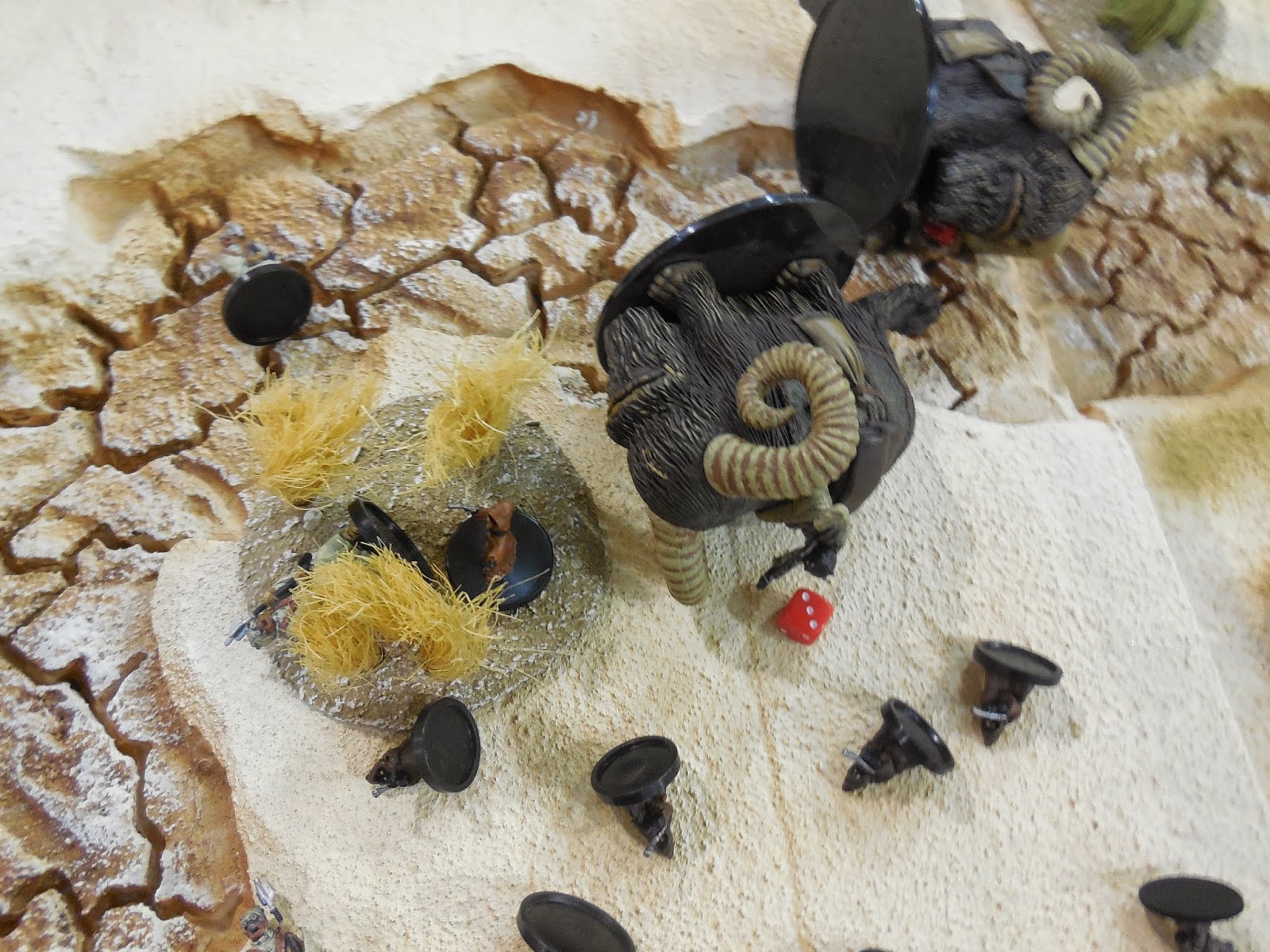 Only to be gunned down at long range by an opportunistic Han and Chewie! 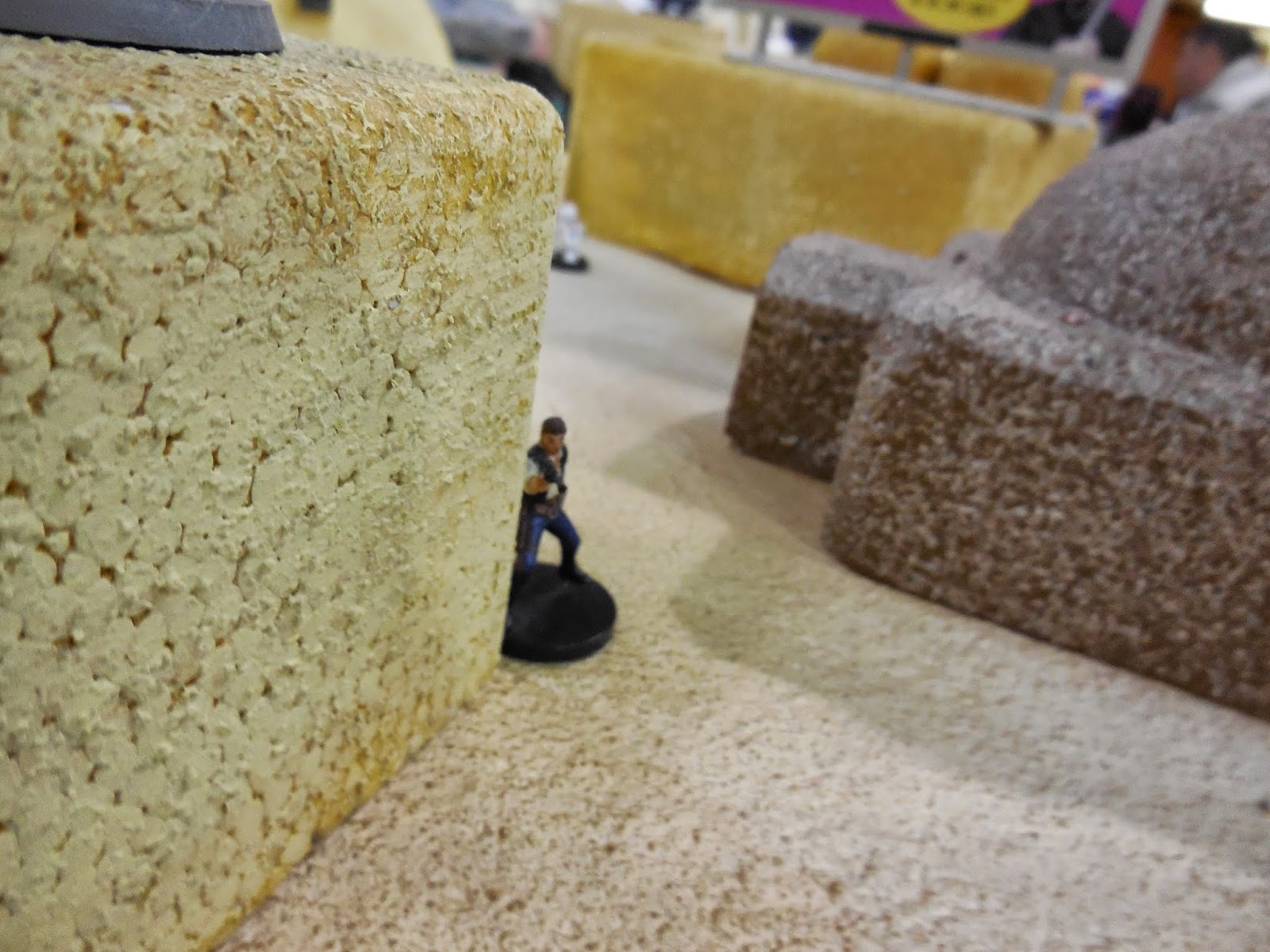 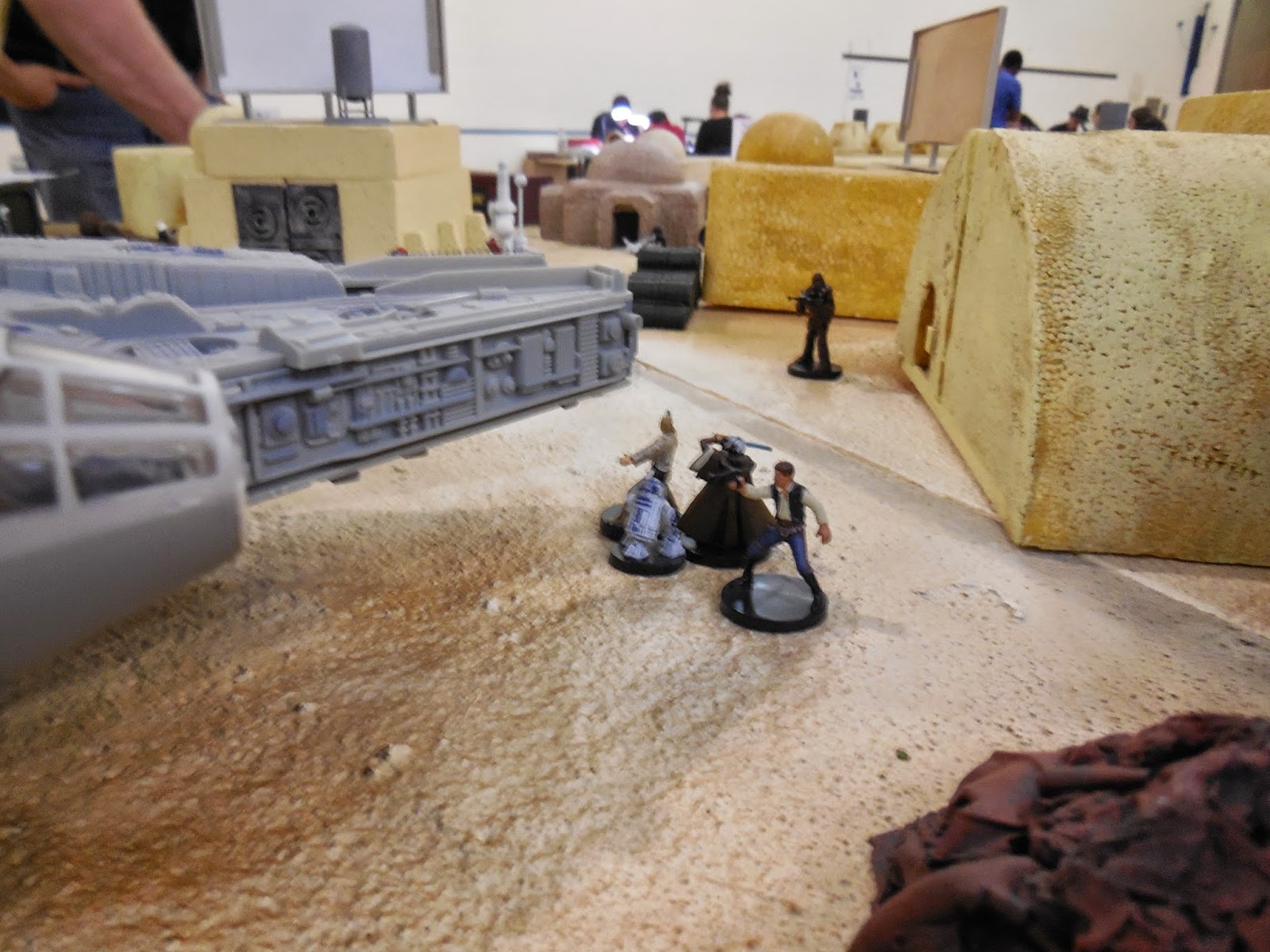 The end of the game was cinematic - Luke and Ben managed to retrieve R2 and along with Han and Chewie, made it to the Falcon and escape! (minus Threepio, who nobly sacrificed himself to save Ben from the bounty hunters. Awwww...)

I think the players had a good time and the game looked swell, if I do say so myself ;-)  Another successful Prairiecon foray in the books! See you next year, Brandon!

That was a great game Dallas! We got to spend two whole turns interrogating R2D2...I'm sure the rebels will be surprised by what files they find on the droid...

Seriously, though, I had a lot of fun. Thanks again for running such a great game!

What a corking looking game.

Great looking game! I need to break out my own star wars figures sometime.

Brilliant! Congrats to all involved in such a great looking game. Bravo!

(And Greg must have done the Happy Dance when 3P0 was turned into spare parts...)

Posted some pics of the game on my blog.

Forgot to add the link lol.

Nice touch with the billboards! ;-)

Bilboards are just amazing!!!! I need to have my own R2 ;) Great looking game. thanks for sharing!