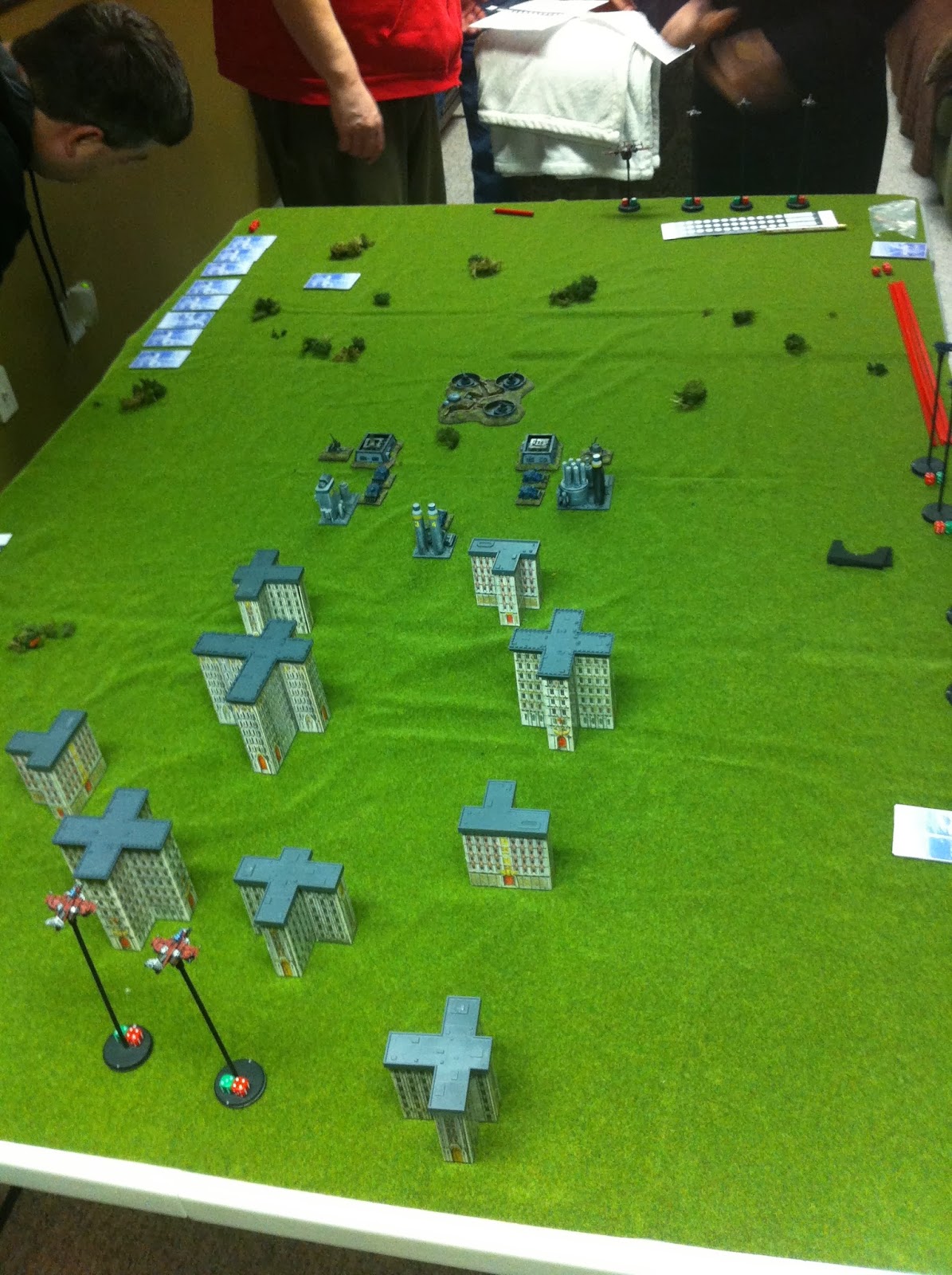 Last Thursday I wanted to set up something we hadn't played for awhile. But I also thought it would be cool to do another game in keeping with our current and long-running Rogue Trader "Invasion of Rynn's World" campaign. The solution was "Aeronautica Imperialis", the short-lived aerial combat game from Forge World, set in the 40K universe. 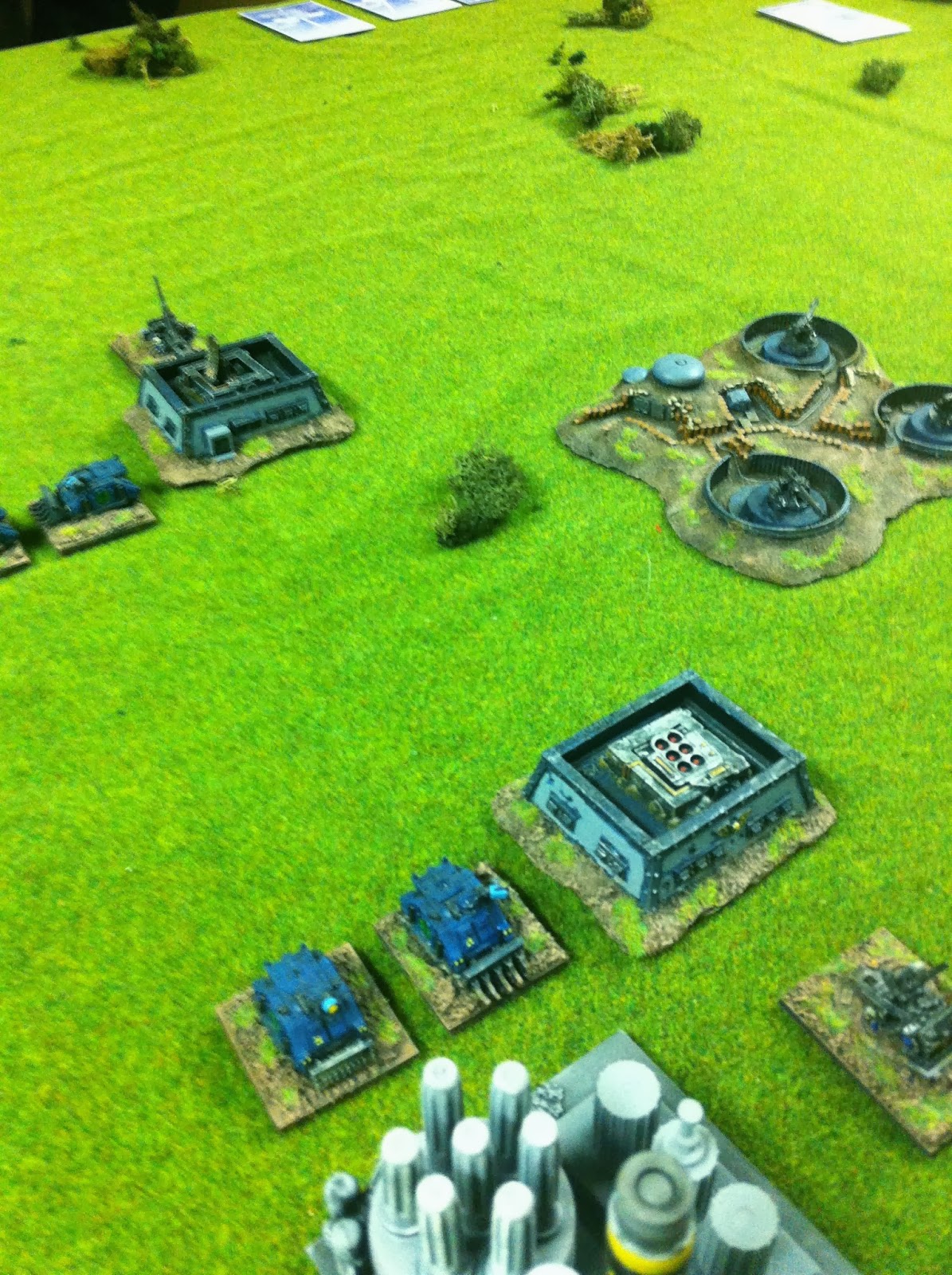 I found a suitable scenario in the AI rulebook. An Ork air fleet is tasked with taking out some ammo supply bunkers on the outskirts of New Rynn City. Imperial interceptor aircraft and ground defences must defend the targets. The Orks had a Blasta Bommer, two Fighta-Bommers, and two squadrons each of three Fightas. The Imperials had two heavy flak guns and two squadrons of Thunderbolts, one of two and the other of three aircraft. 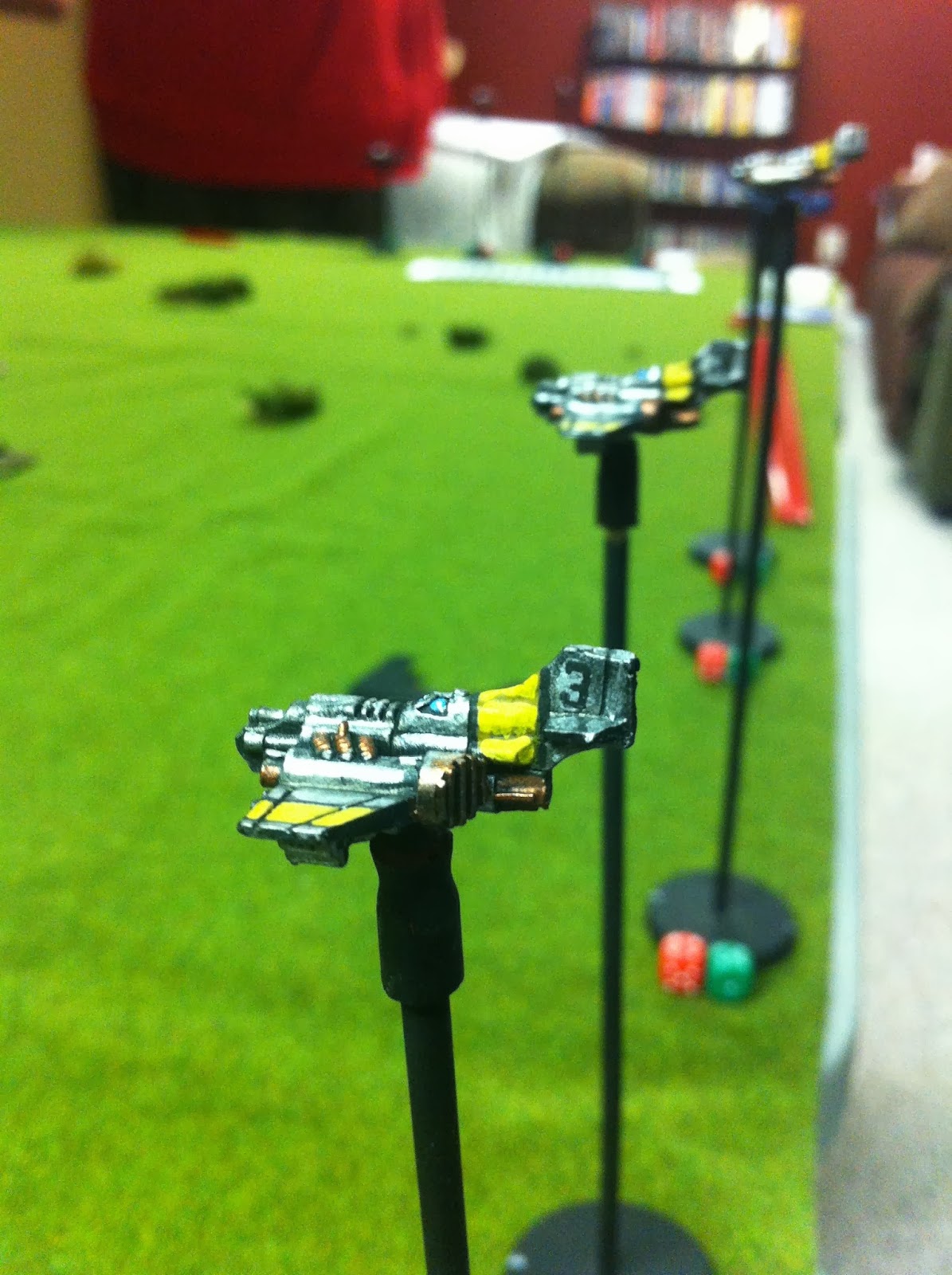 The models I have for AI are mainly the old Epic aircraft, cast in white metal. They're great models. 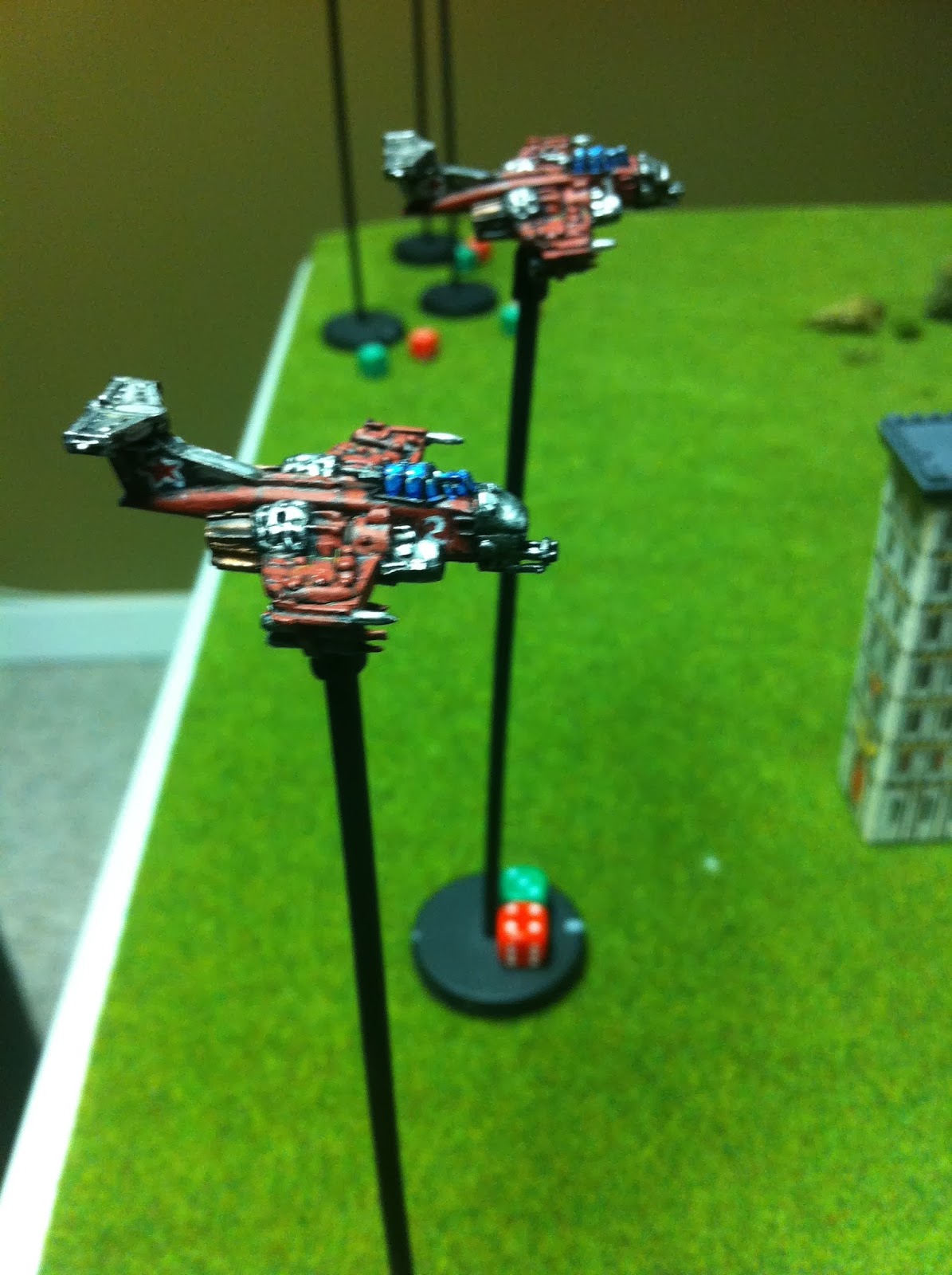 The Ork Fighta-Bommers are converted Imperial Marauders from Epic. I greenstuff'd on some Orky looking engine covers and rivets and gave 'em a red paintjob. 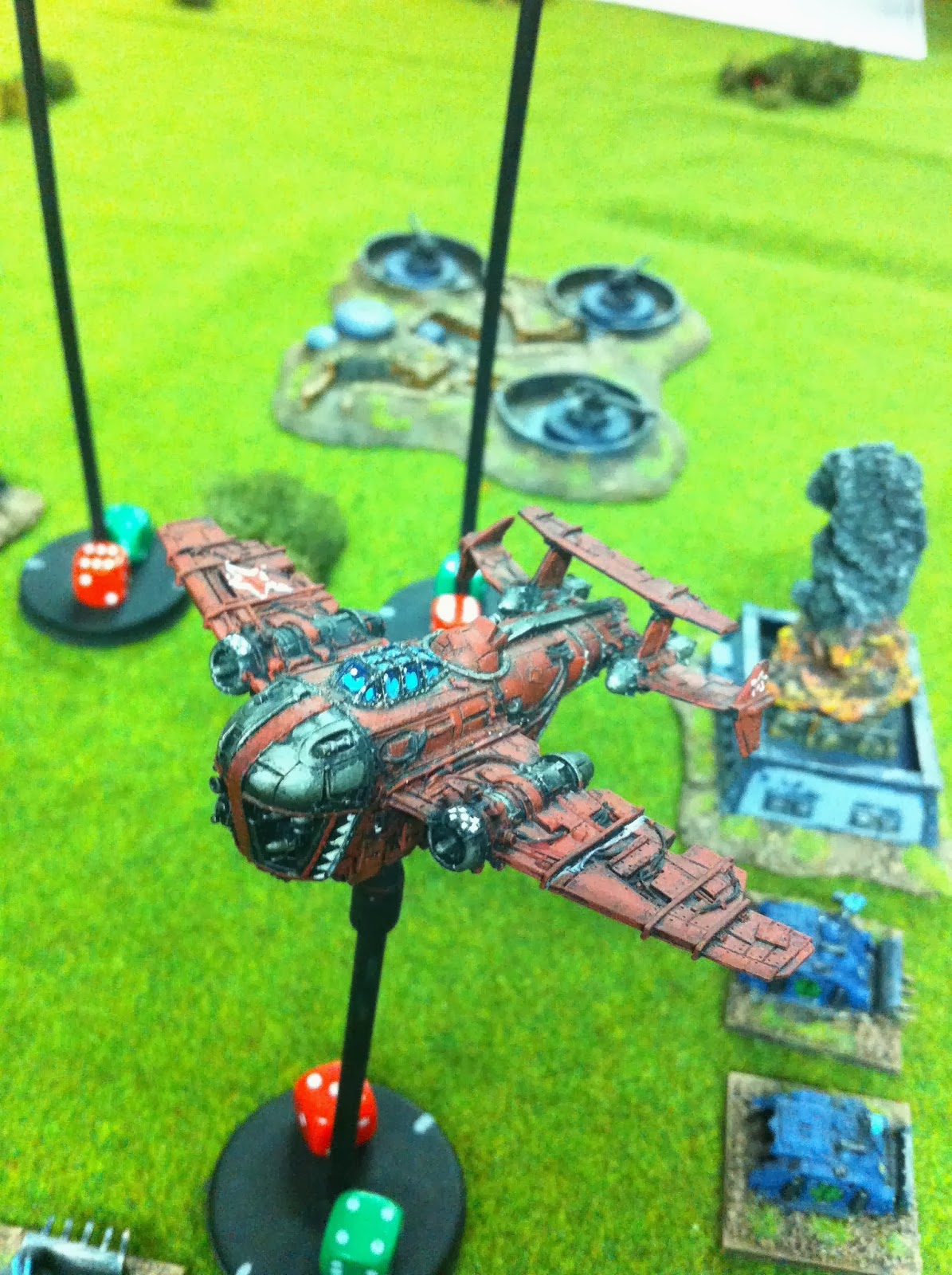 The Blasta Bommer is a resin Forge World piece. A gorgeous model but a bit of a challenge to assemble as the resin on the rear stabilizers was pretty warped. Lots of fiddly little gun barrels too, and unfortunately some were casualties of our recent house move :-( 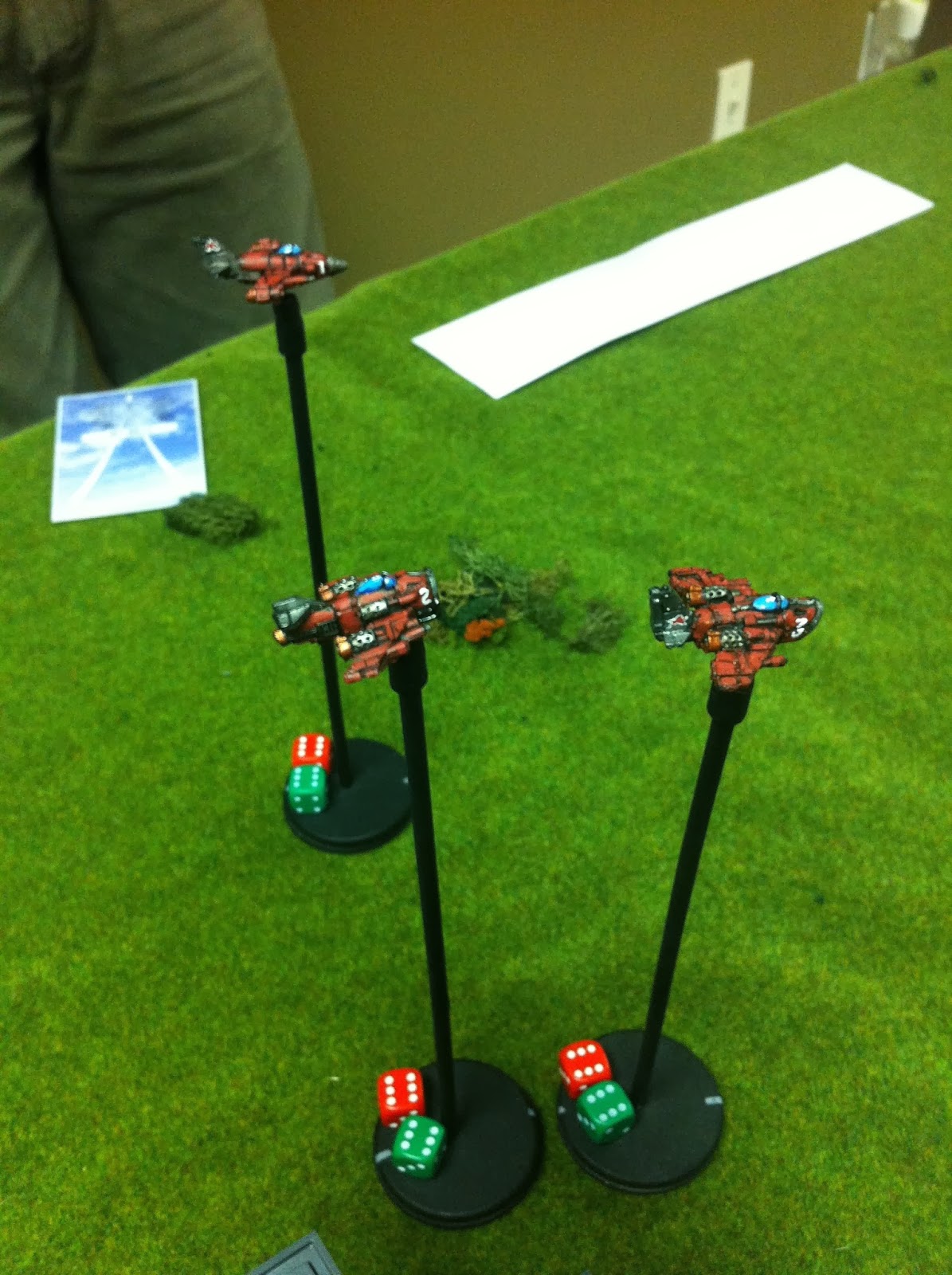 Fightas are Epic pieces and are super-fun to paint. Very characterful and Orky little models. 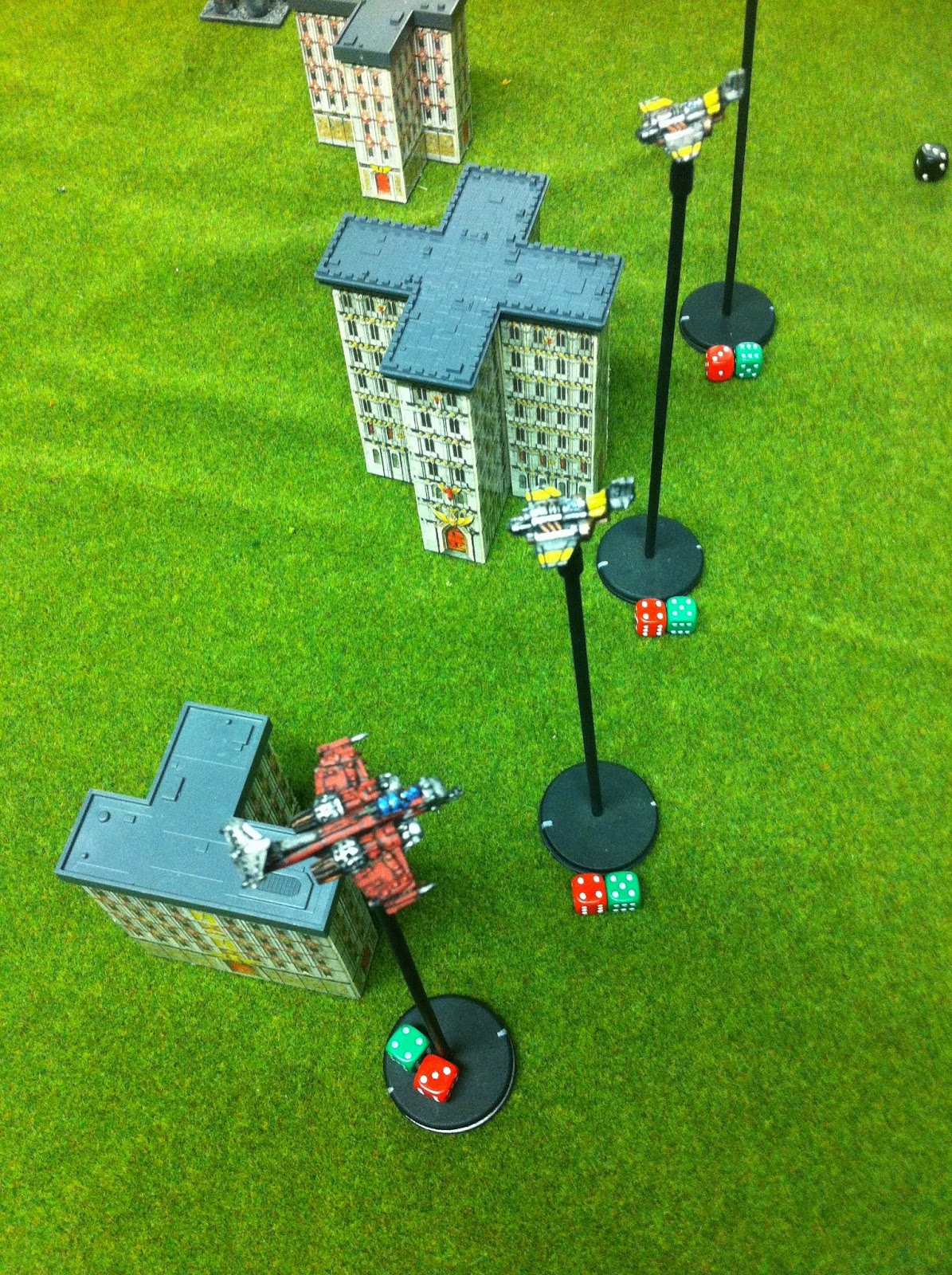 Here's a nice shot of the beginnings of the furball. Aeronautica Imperialis uses clever little "maneuver cards" that also act like templates for the maneuvers. Pre-plotting is limited to choosing a maneuver for your plane for the next turn. Speed is set at the start of each turn (shown on the red dice) and altitude is a function of maneuvers picked (green dice). 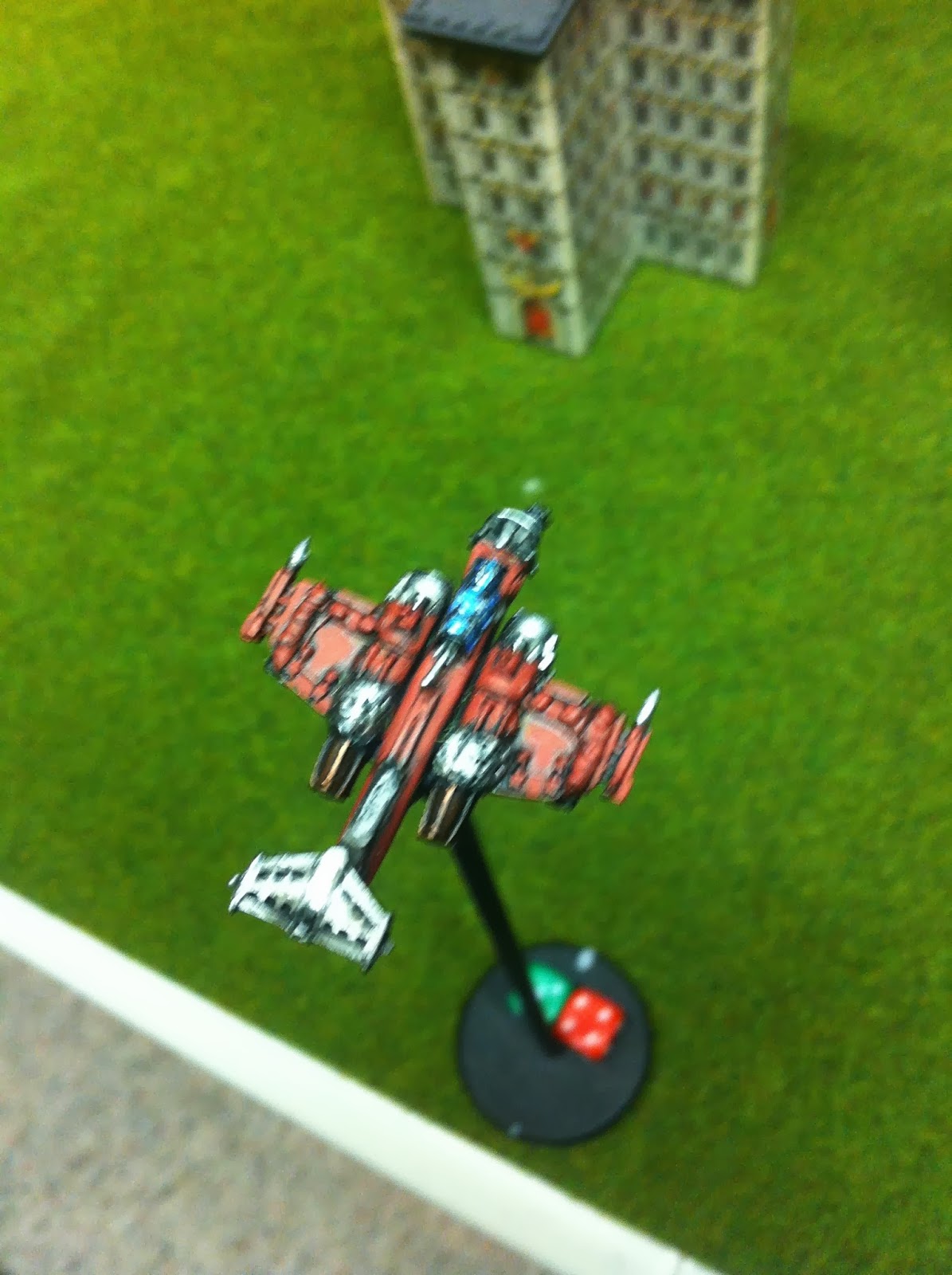 The two sides dice for initiative at the start of each turn and the winner picks one plane to move, and play alternates back and forth. Shooting alternates too, with the initiative winner picking the first plane to shoot. Fighters generally take two points of damage to bring down but some weapons can do more than one point per hit. Ork big shootas, for example, roll 8 dice at short range! Hits are scored on a 5 or 6 if the target is at the same altitude as the firer - if they're one range band apart it takes a roll of 6. 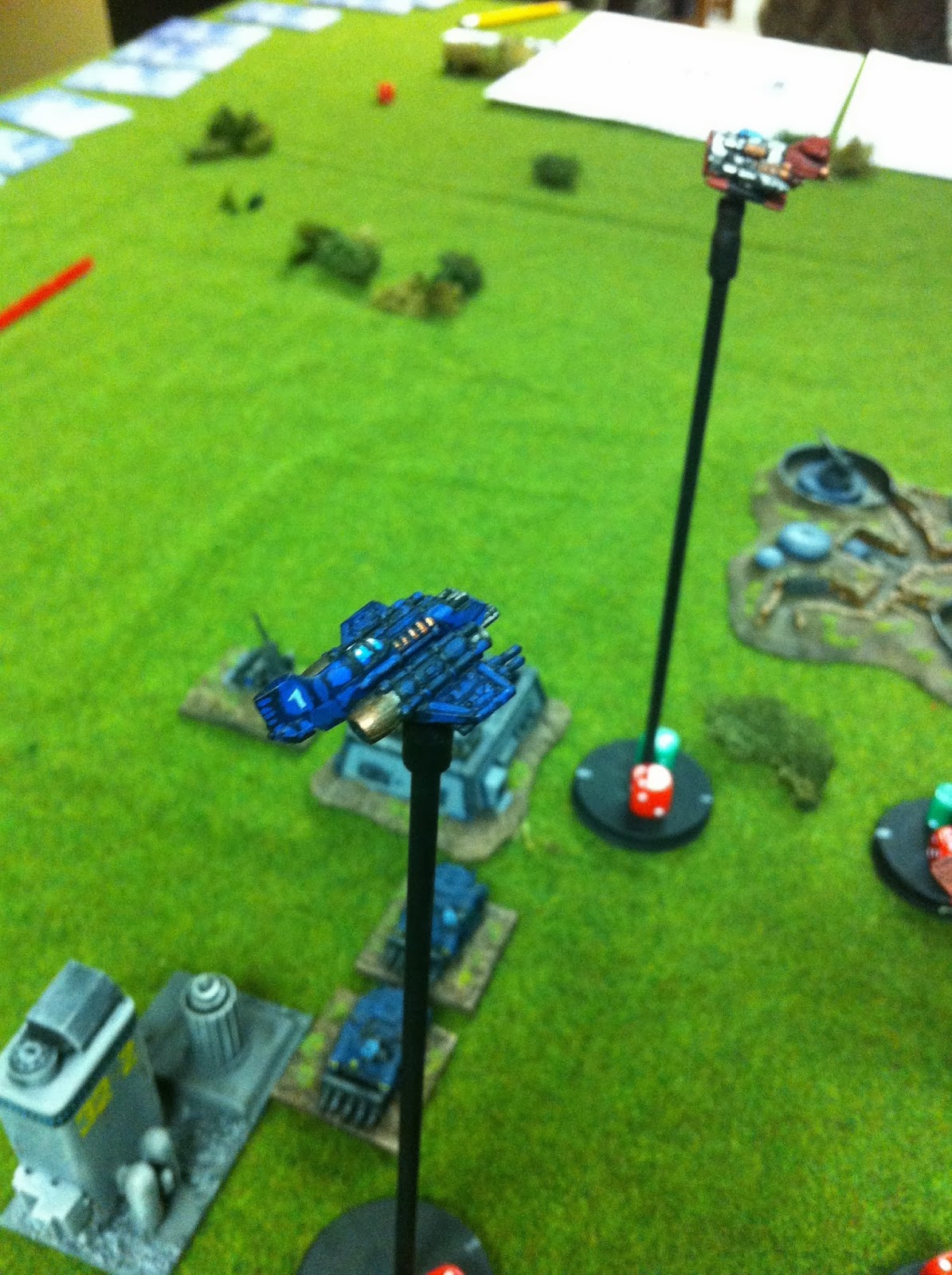 A Thunderbolt catches one of the Ork Fightas in a deflection shot. Conscripts Greg and Mike ran the Imperial side, and if it wasn't for bad luck they'd've had no luck at all. Usually Mike can be relied upon for hot die rolling but not this night. Both Greg's and Mike's dice were appalling. 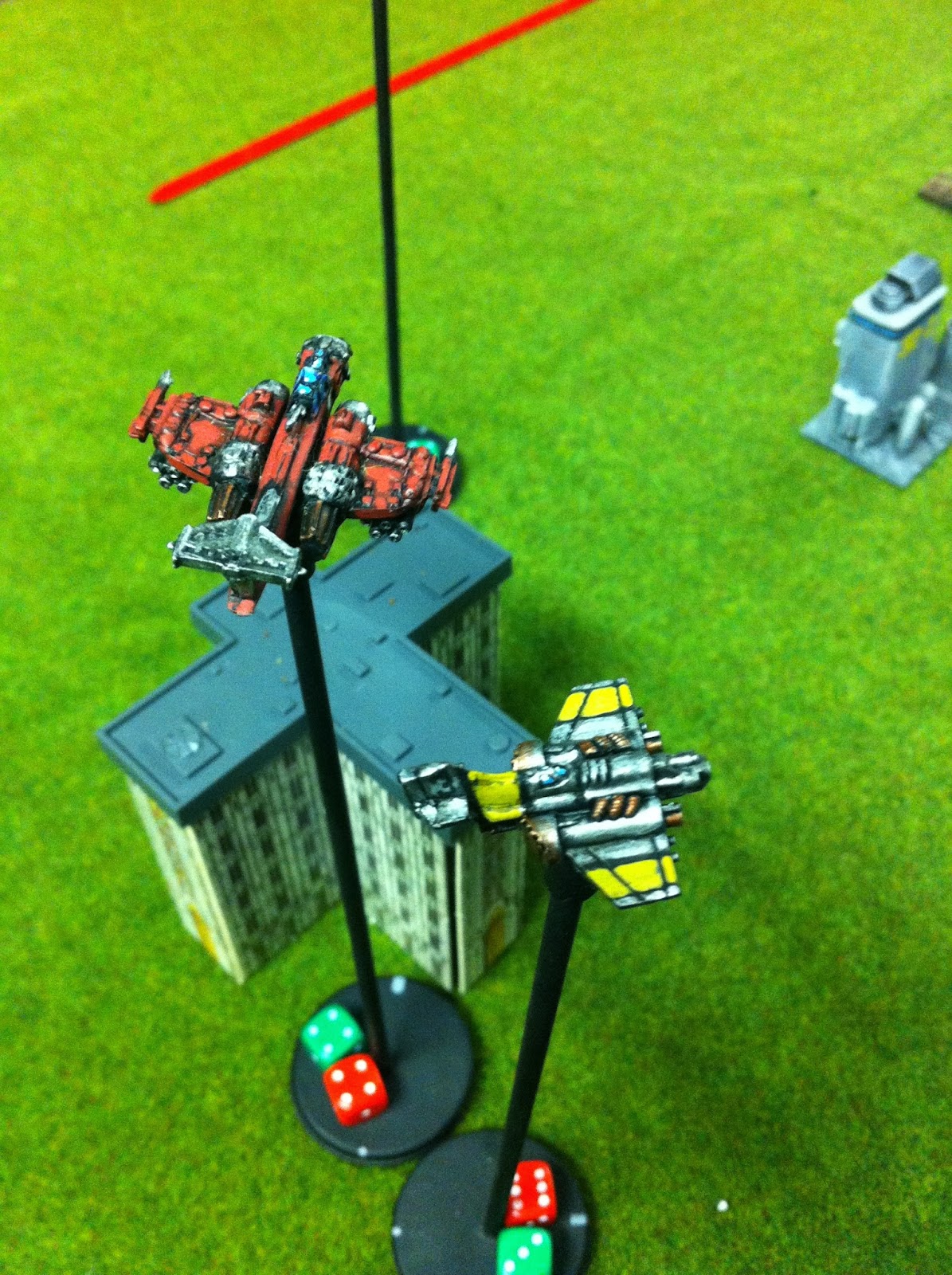 The Orks drew first blood with a shootdown of a Thunderbolt. Kills went back and forth for a bit but the Orks had more planes in the air so could absorb more losses. 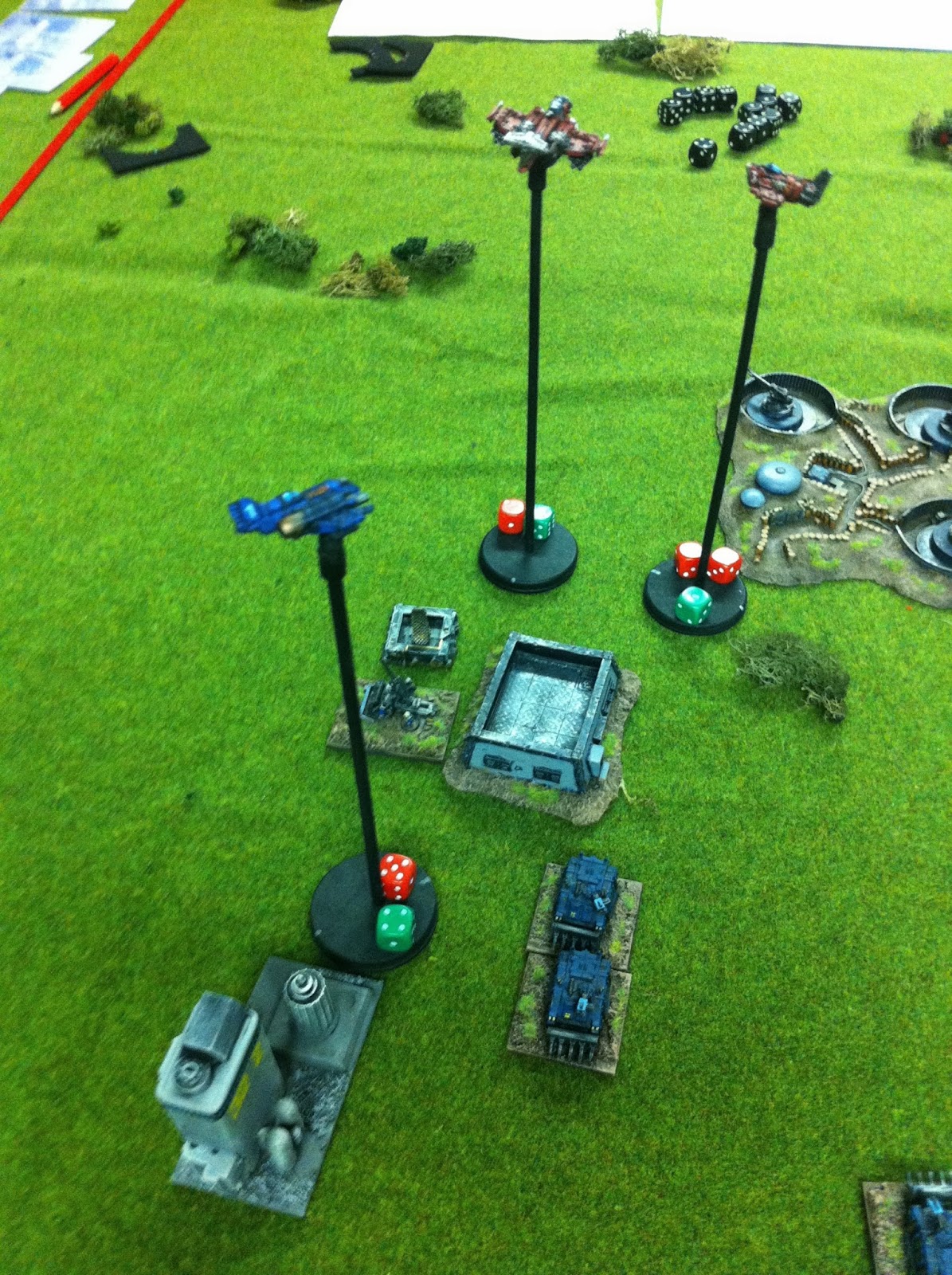 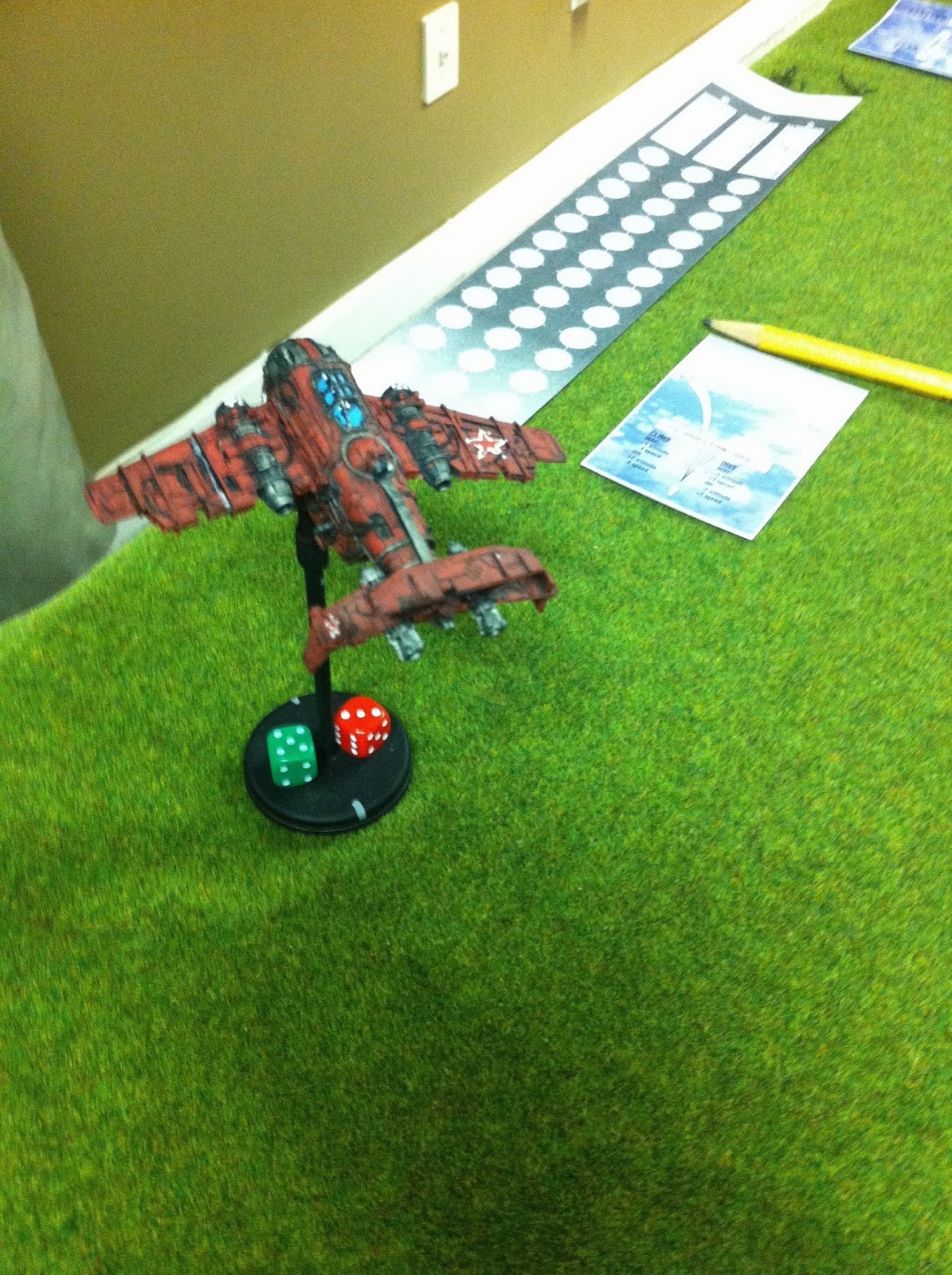 The Orks left the heavy lifting to the Blasta Bommer and it obliterated one of the bunkers on its first bomb run. Then the huge Bommer ended up flying off the table! A Fighta-Bommer hit the other bunker and although the doors were blasted off, the ammo inside failed to detonate. 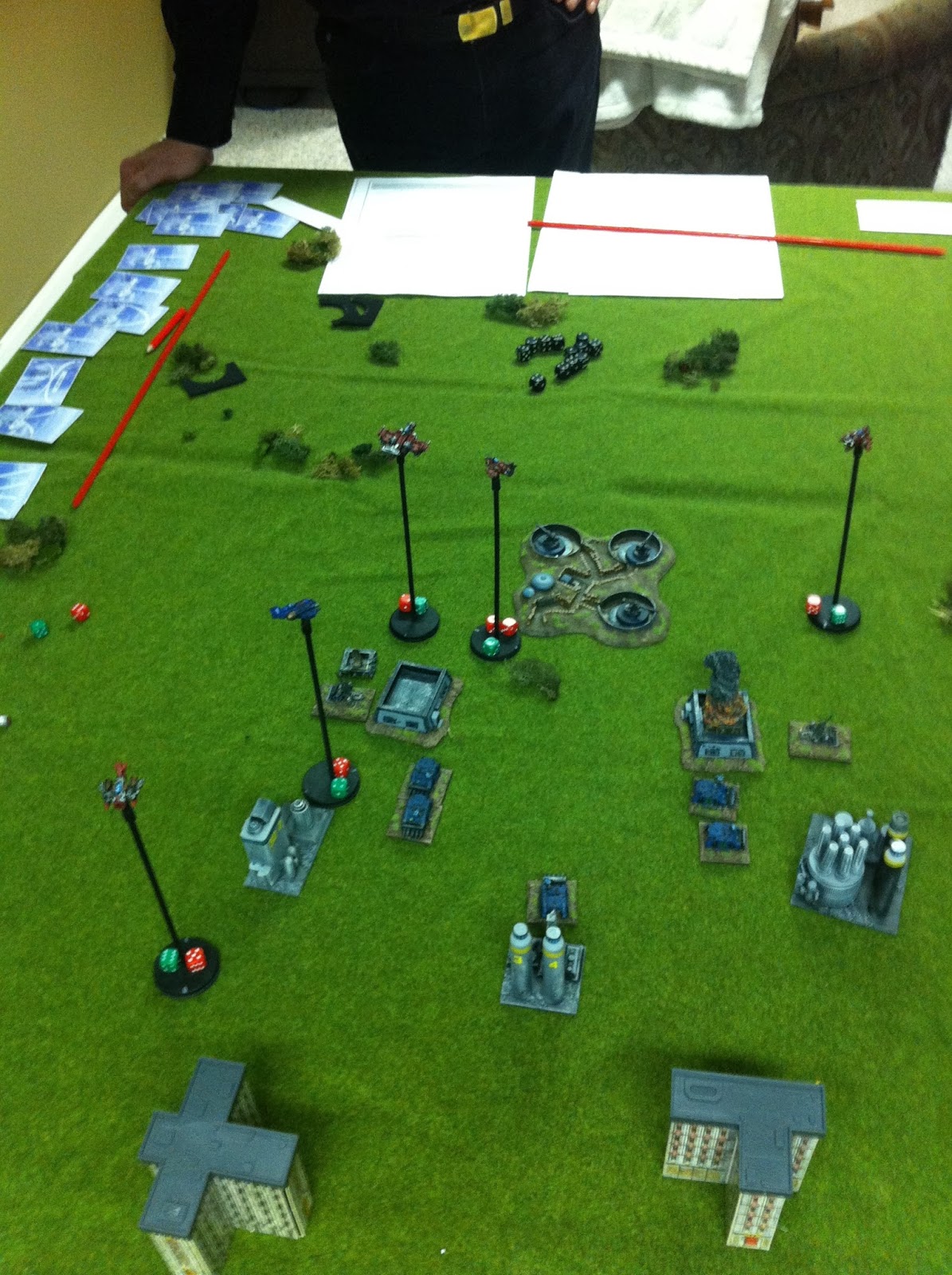 The Orks had much better dice luck than the Imperials in the dogfight and after about 7 turns the Imperials had lost too many planes to continue - after taking 50% losses the remainder must bug out. So although the Orks only busted one bunker, we had to give them the win as they forced the other side off the table.

I really like AI for a straightforward aerial fight. There isn't a ton of record keeping required but the maneuver cards keep things flavorful and moderately tactical. The models are great too, and it's easy to put on a game. It's one of those Specialist Games that never should have died.

Nice write up and pics. I'd have to say that I can't think of a specialist games that it isn't sad that it was killed off.

So specialist I've never even heard of it. Sounds like fun though.

Mike is too busy working right now, so I'll just take this chance to blame everything on him :)

Nice to see AI getting a bit of love. Really makes me wish I'd collected a bit more for it at the time, especially since the only other player I know went moved to Japan! Sounds like plenty of fun was had!