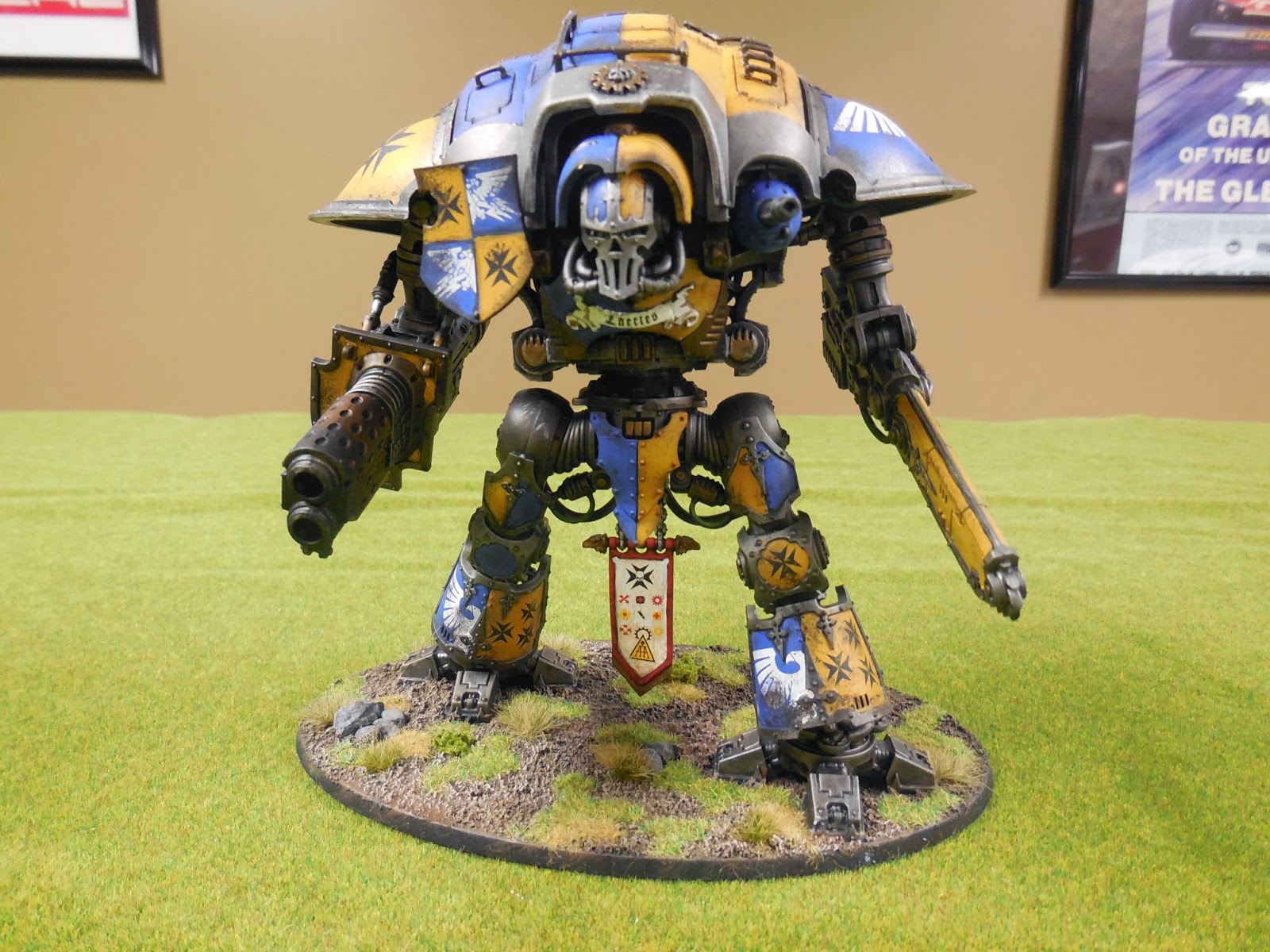 File this one under "Latest/Greatest/Shiniest"... the new Imperial Knight (don't call it a Titan) for 40K. Conscript Greg and I each picked up one of these from a mail-order discounter and I went down to Pembina ND to pick them up two weekends ago. I finished this one in record time - there's a "show-off" event at the local GW this weekend and I wanted to have it done in time. 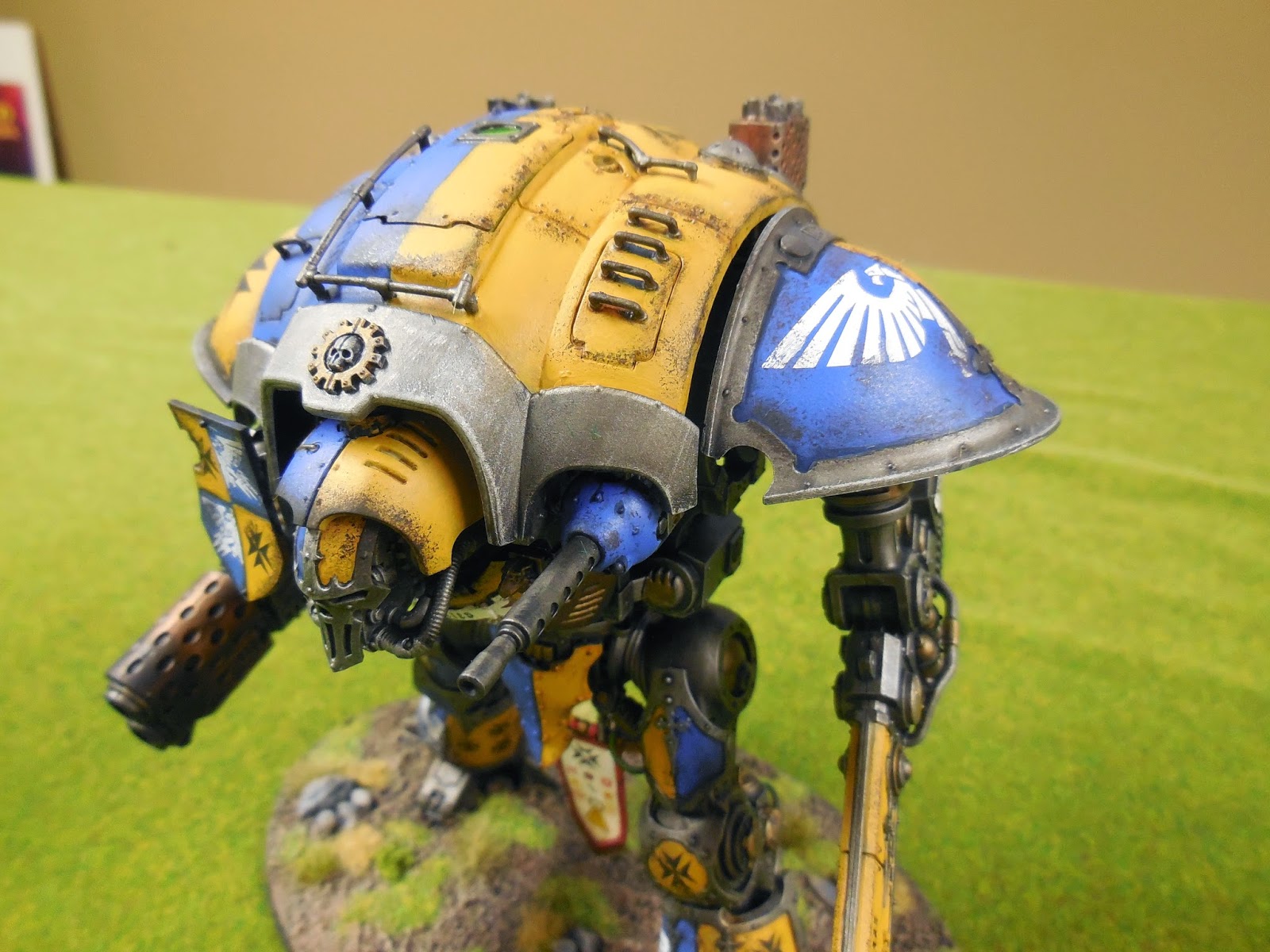 Building this model, like most modern GW kits, was straightforward and mostly satisfying. The worst I could say about it was that some of the parts that were designed for articulation have tolerances that were too close to accommodate dry fitting without glue (head and stubber mount, I'm looking at you). However, these I just glued in place. 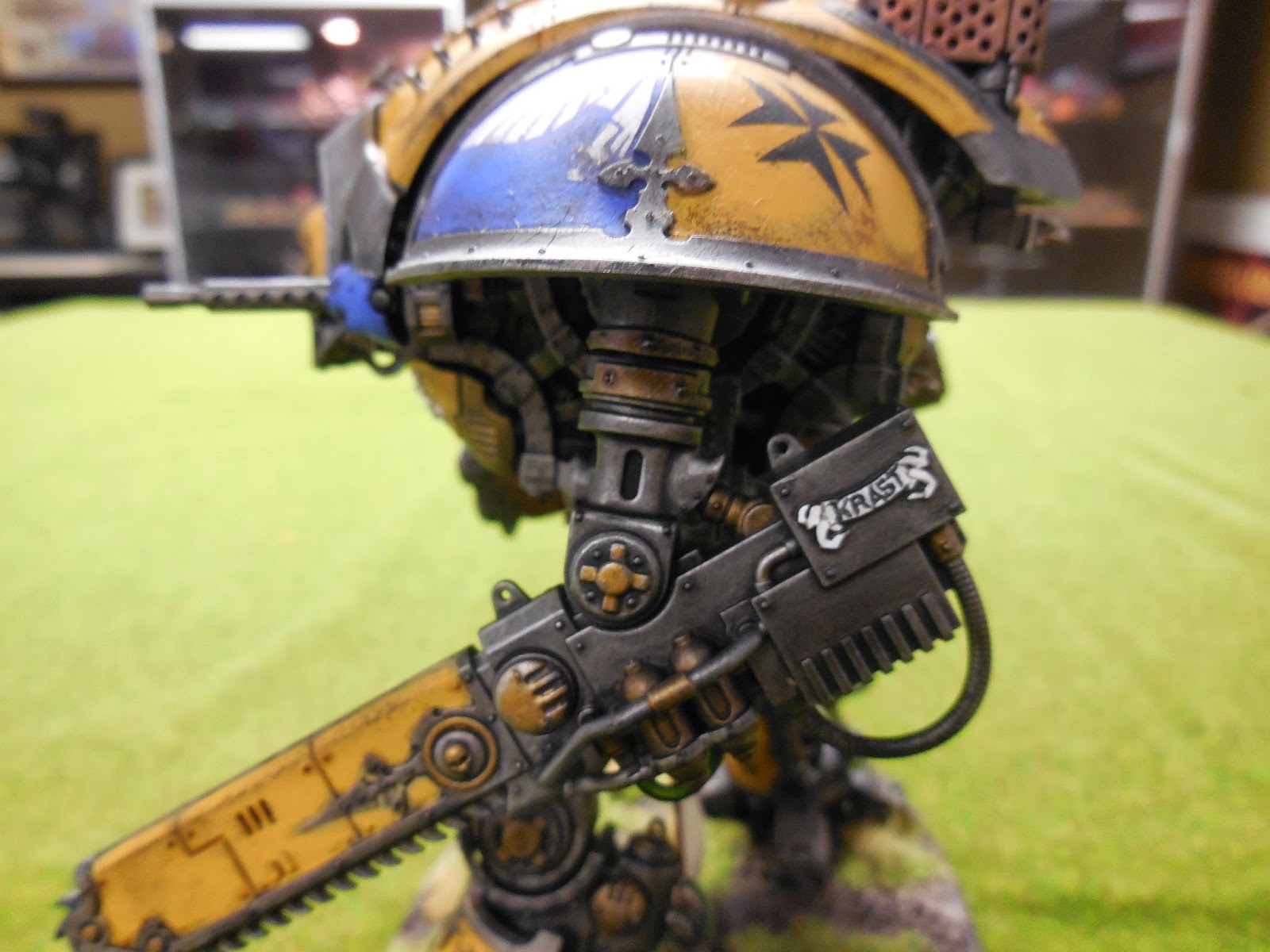 As the label says, I built this one as a Knight Errant of House Krast. This noble house has a history dating back to the Codex Titanicus of 1994 - unlike its modern iteration, the historic House Krast colours were blue and yellow, and its emblem a Maltese or Amalfi cross. So this is what I went with. 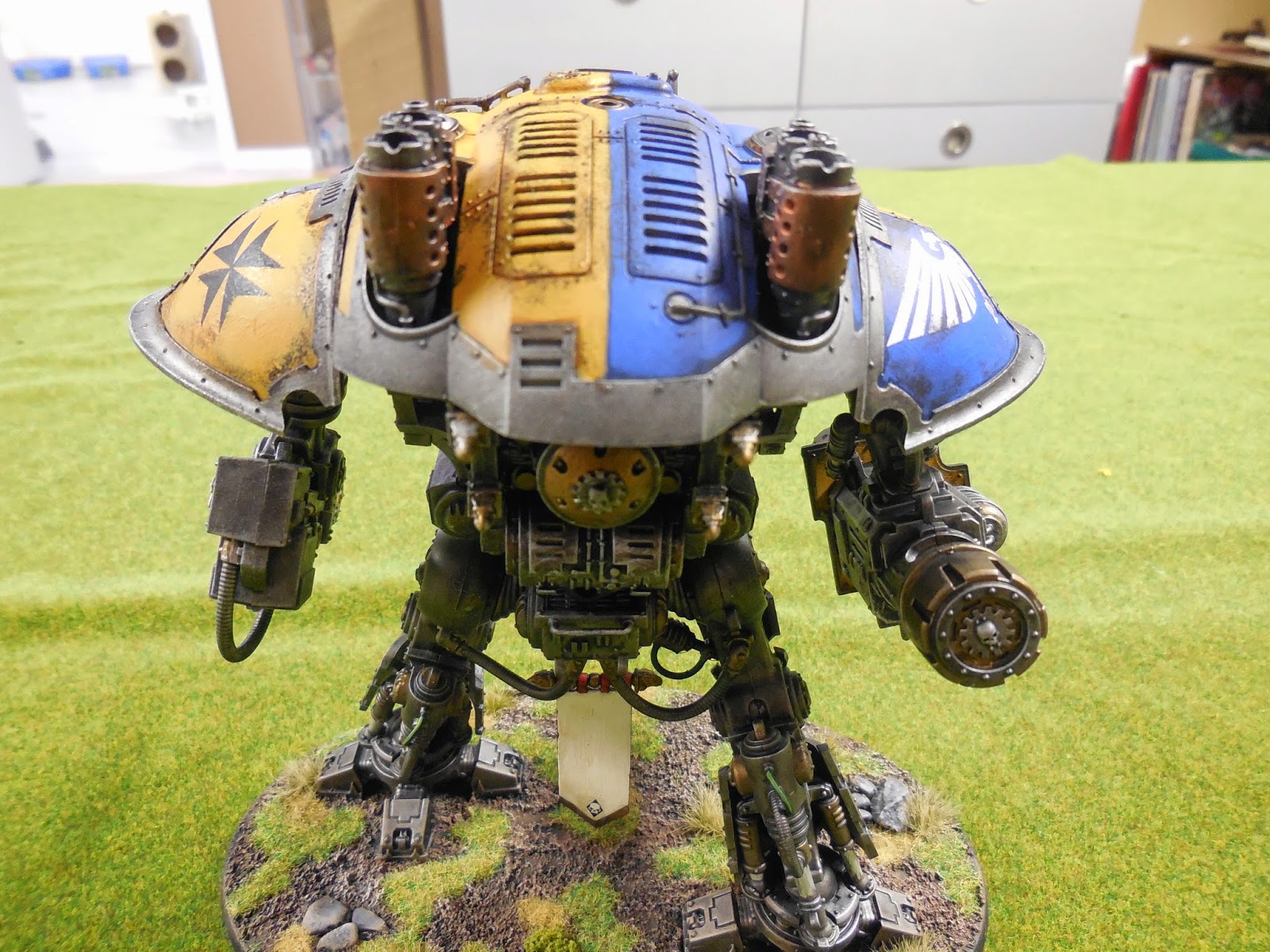 For blues, I basecoated with GW Regal Blue and highlighted this with Ultramarines Blue. Pinwashes around the rivets were done with Nuln Oil/Badab Black. The yellow is Calthan Brown highlighted with Averland Yellow and washed with Gryphonne Sepia, brushed back up with Averland. 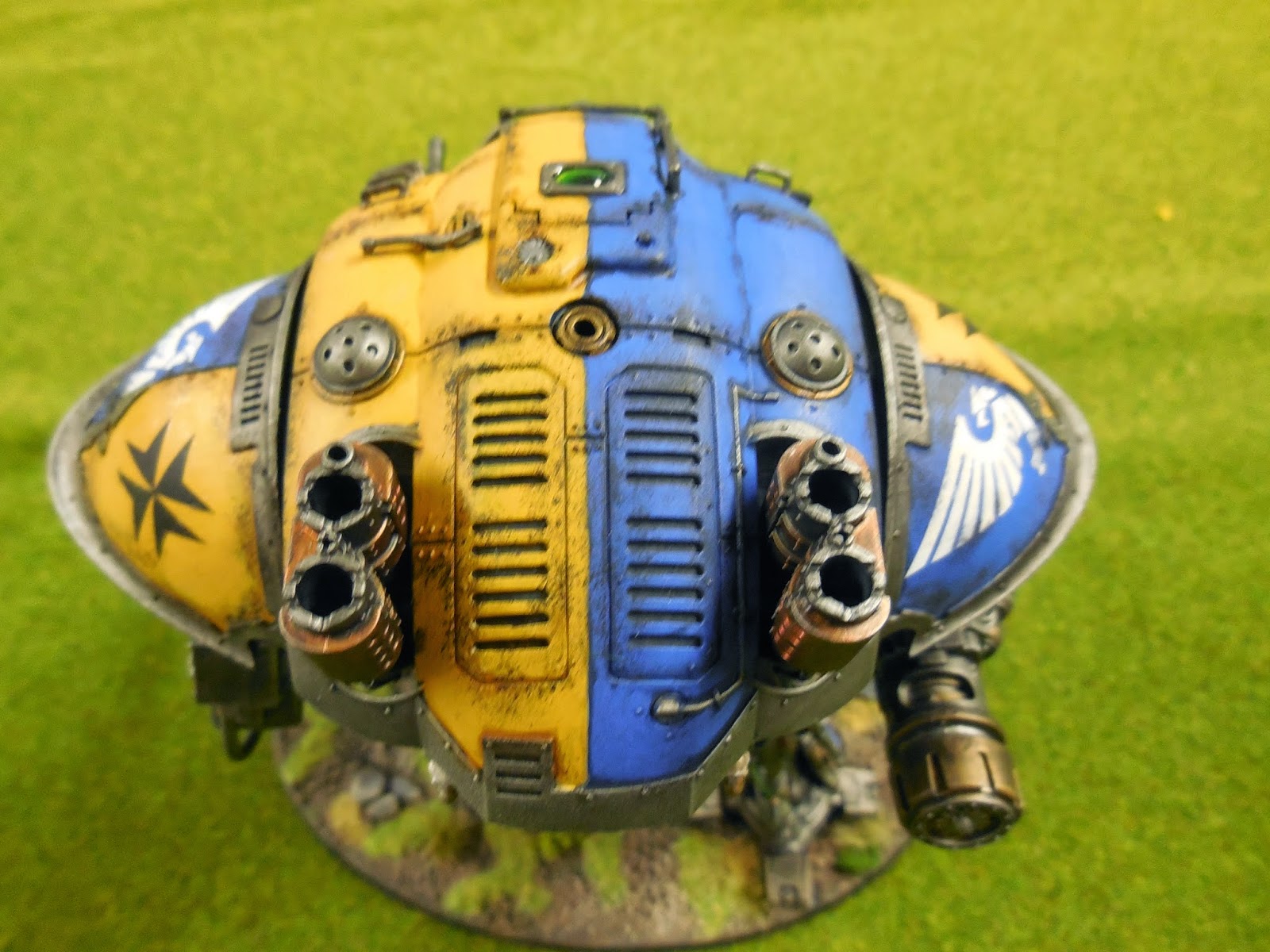 .
I did some extensive paint chipping with a sponge technique. The colours used were a mix of craft black and GW Scorched Brown. I might have overdone it a bit but I kept other weathering to a minimum and in any event, I like my war machines to look battle-used. 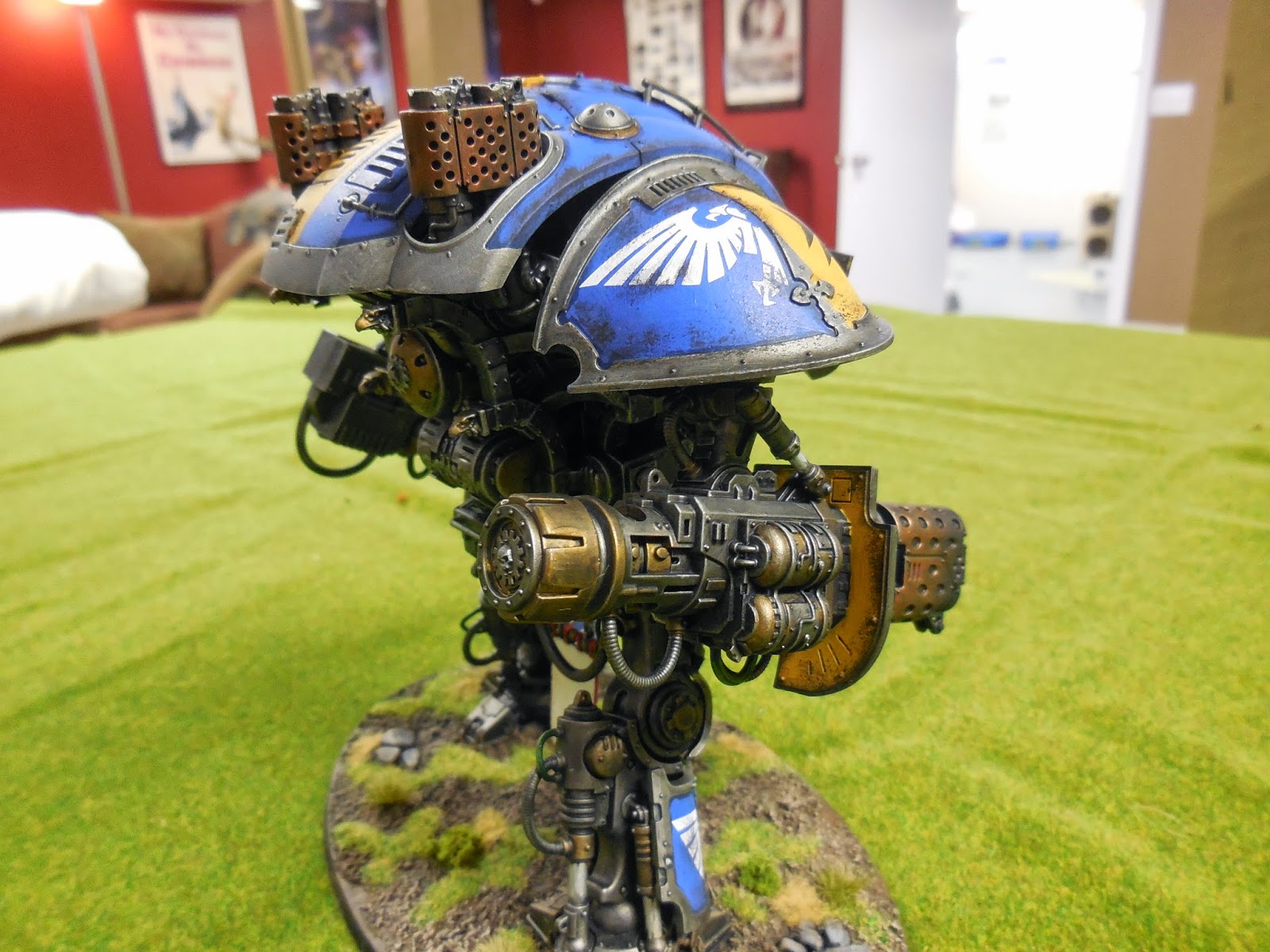 Greasy bits were painted Leadbelcher (Boltgun Metal), washed twice with Nuln Oil, and drybrushed with with Mithril Silver. Some gold and copper metallic craft paints were used too. 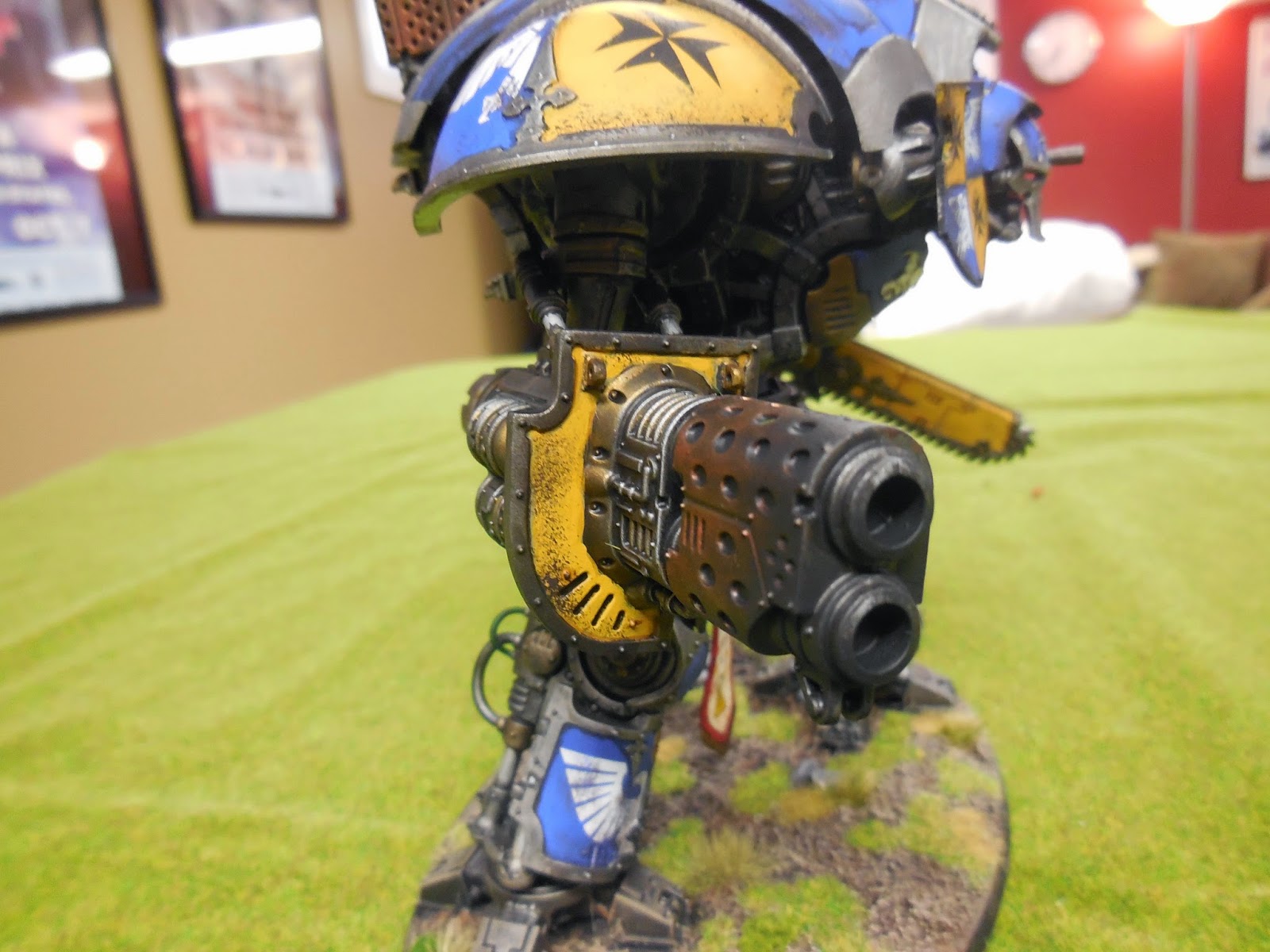 Business end of the melta was drybrushed back with craft black. Note chipping around the gunshield. I really went to town with the weathering on the heraldic shield. Decals are from Griffon Games (the crosses) and GW. I especially like the decal sheet supplied with the kit - those eagles are a thing of beauty. The decals are thick and durable but settle down nicely with some Microsol setting agent. Mechanicus cog indicates fealty of Krast to the Adeptus Mechanicus, but I liked the Imperial eagle aesthetic better for carapace decals. 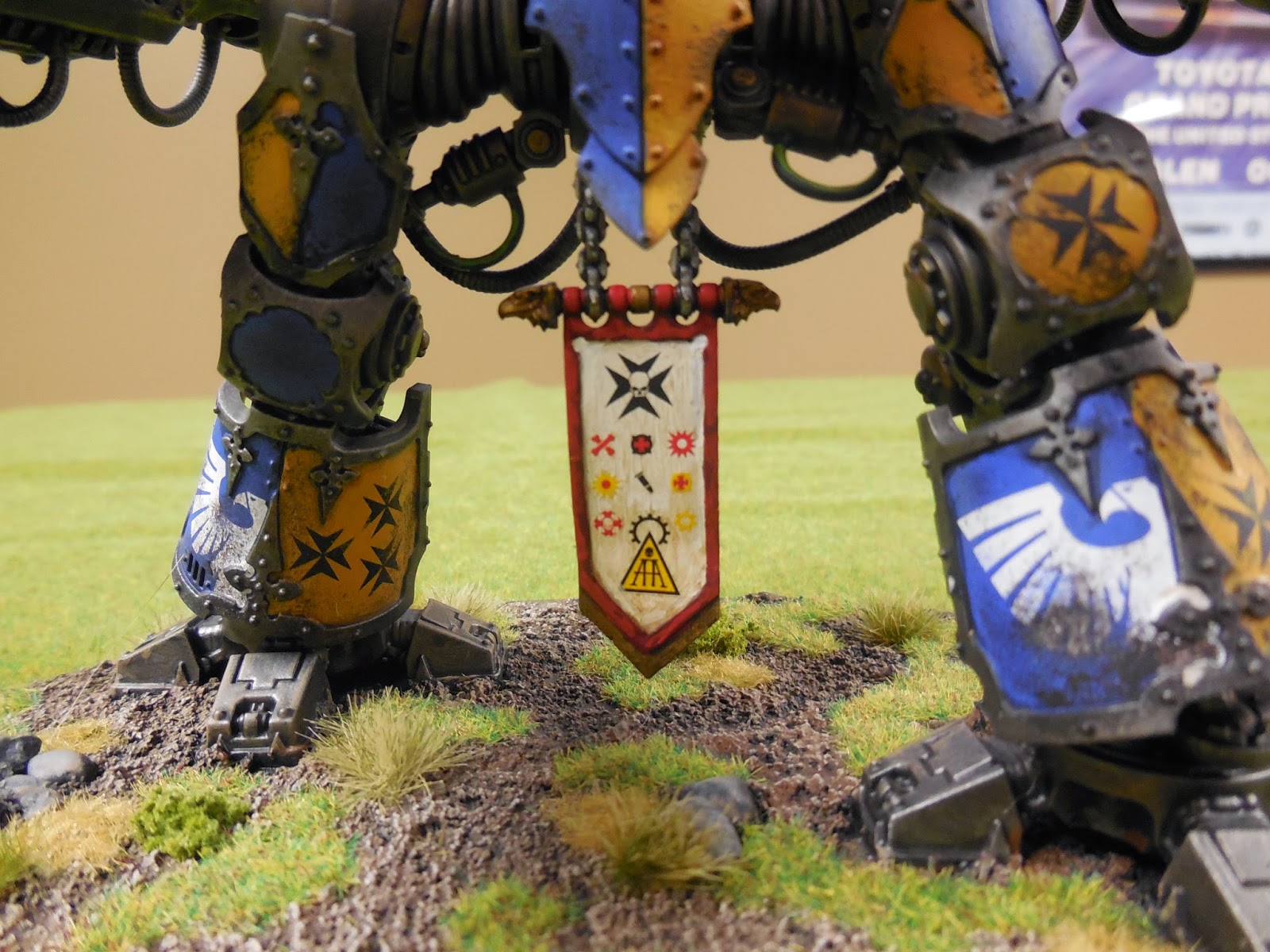 Funky little loincloth with coded message! The decals came in real handy for this. Were I to build the kit again, I'd leave this part off and paint it separately. As it was I attached it to the model before painting and that made things harder. I'd built the rest in sub-assemblies per the excellent guide in White Dwarf Weekly and I'm glad I did.

I also did pretty elaborate (for me) groundwork as this will be primarily a display model. Stone piles, two different static grasses, and a variety of tufts. I like the look. But no skulls!

I have to say that I think GW hit it out of the park with this one. So true to the original Jes Goodwin aesthetic from 20 years ago, yet thoroughly modern in execution. Worth the money (at ~40% off anyway) and a satisfying build.
Posted by Dallas at 7:13 PM

Great looking paint job! Nice to see some different colour schemes too compared to most of the stuff popping up around the web.

Lovely looking kit and the paintjob is excellent. Nice one!

Fabulous work on this guy Dallas! I really like the weathering and heat scoring on the body.

Although, a small scorched and crumpled "Horus for Hope" poster on the base would have been a nice touch! ;-)