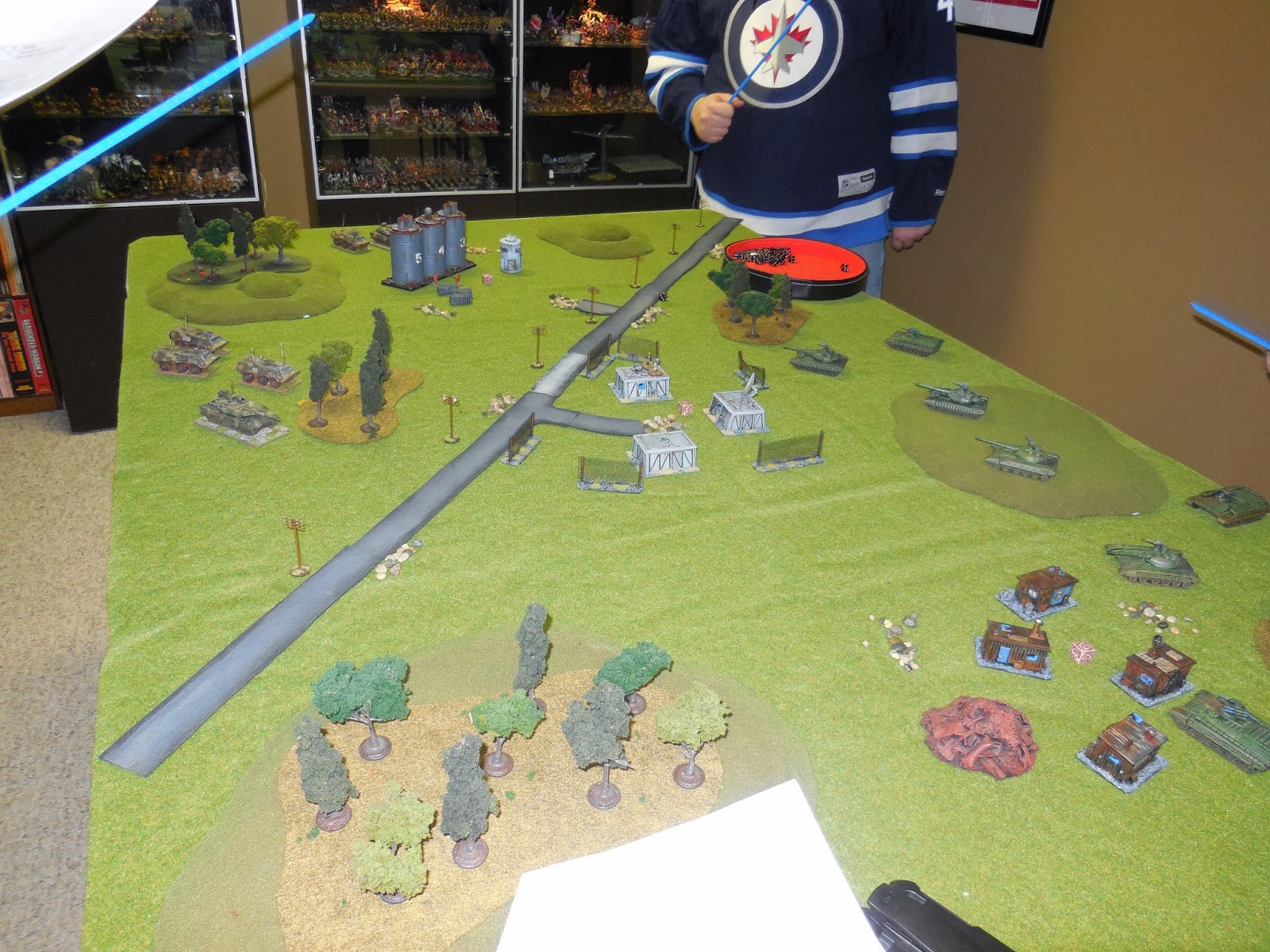 This week the lads came over for a 15mm sci-fi game. We set up a pretty straightforward scenario - seize objectives. The backstory was a bit more fun:

The Republic of Bezerkostan, former satellite of the Union of Nova Respubliks, is in turmoil. The government has been overthrown in a quasi-military coup and unrest is everywhere. The Nova Respublik, alarmed and emboldened by this turn of events, considers military action to safeguard the security of the Respublik-speakers living in Bezerkostan...

Setting: Vladimir Putin Memorial Sludge Reclamation Facility, Republic of Bezerkostan
In the interests of promoting their "peace-loving agenda of universal order for Respublik-speaking-peoples" (PLAUORSP), the Nova Respublik has dispatched a team of Spetnaz troops to secure the Sludge Reclamation Facility.  A detachment of Nova Respublik Motor Rifle troops has been sent from the nearby population centre of Putinograd to reinforce them.  Conflict looms with the well-equipped observers from the Euro-Coalition for control of the Facility, determined by occupation of three different locations on a 6' x 4' table... 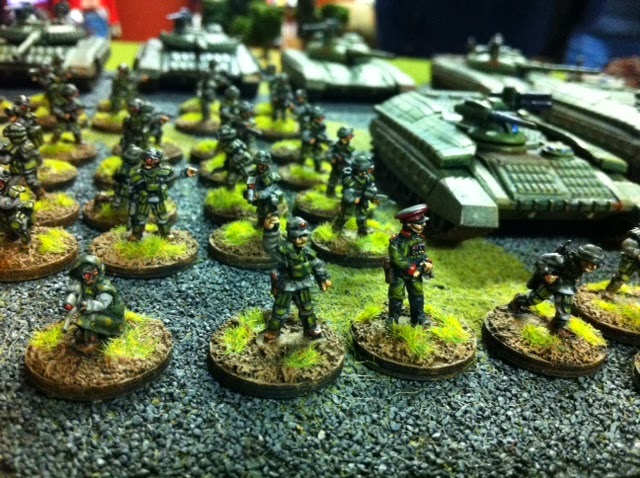 Nova Respublik troops... or maybe not. They've removed their insignia and the Nova Respublik officially denies all knowledge of their activities ;-) 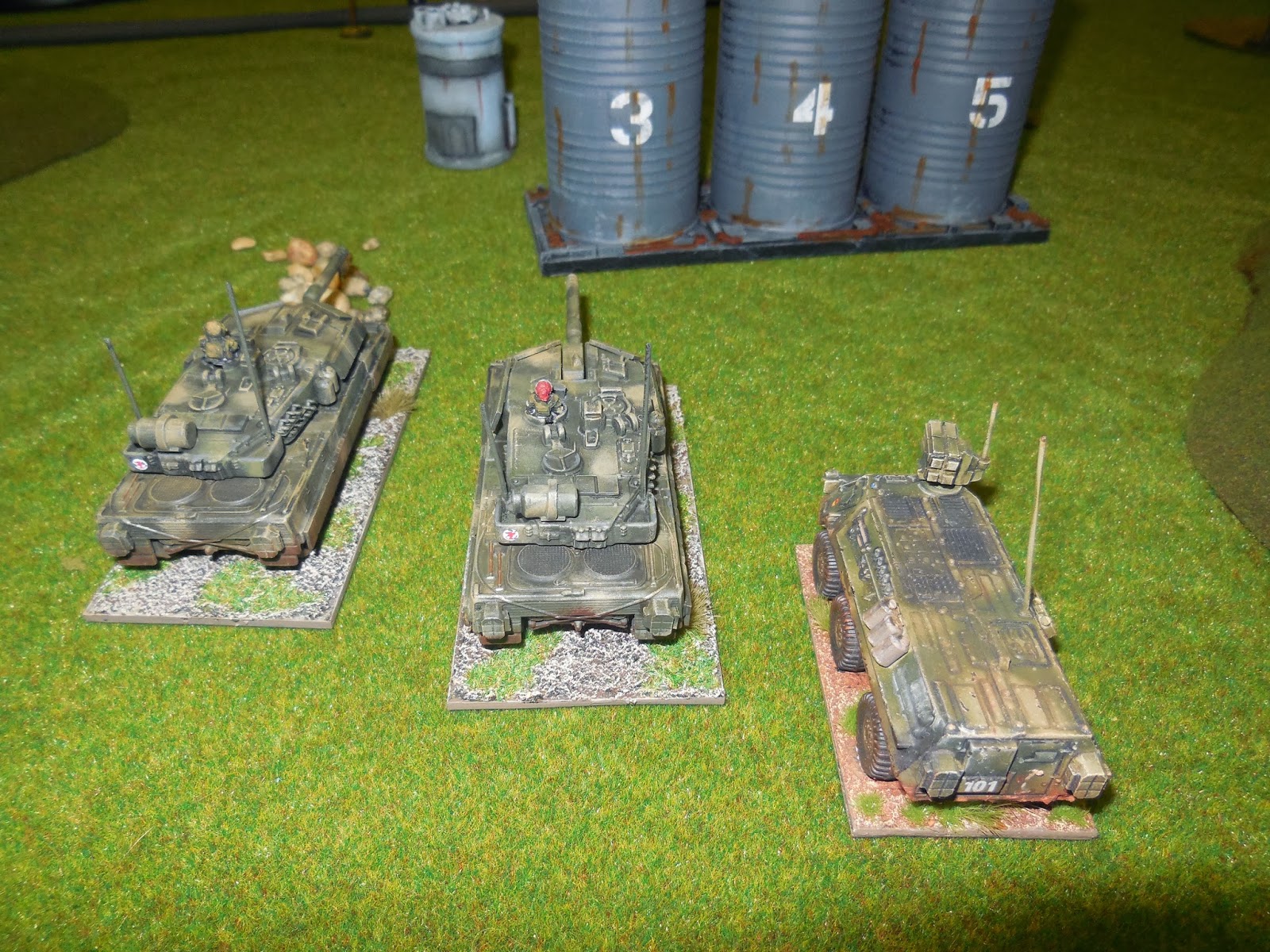 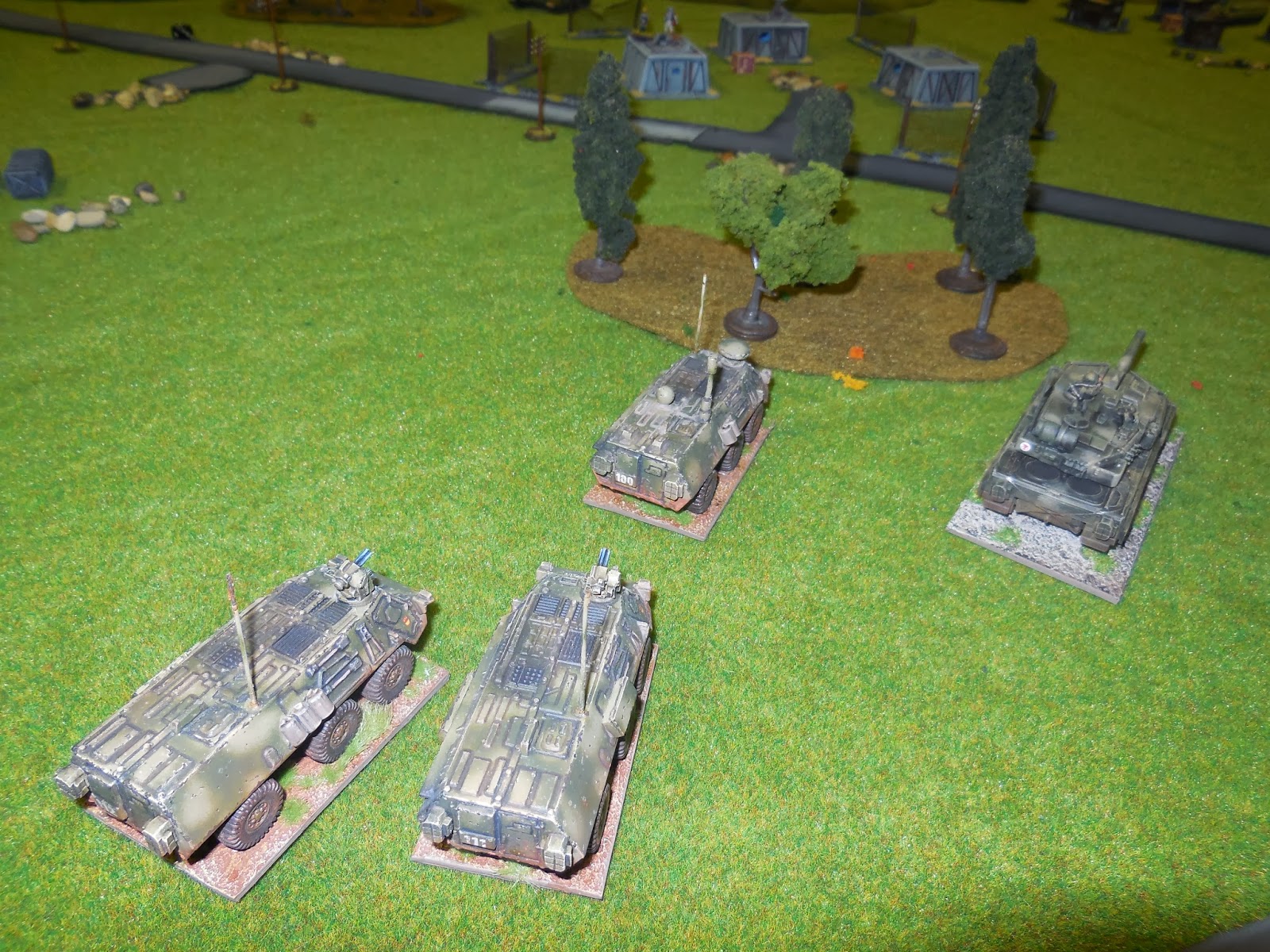 In the centre, EC Fuchs 3s and another Leopard 4A2. 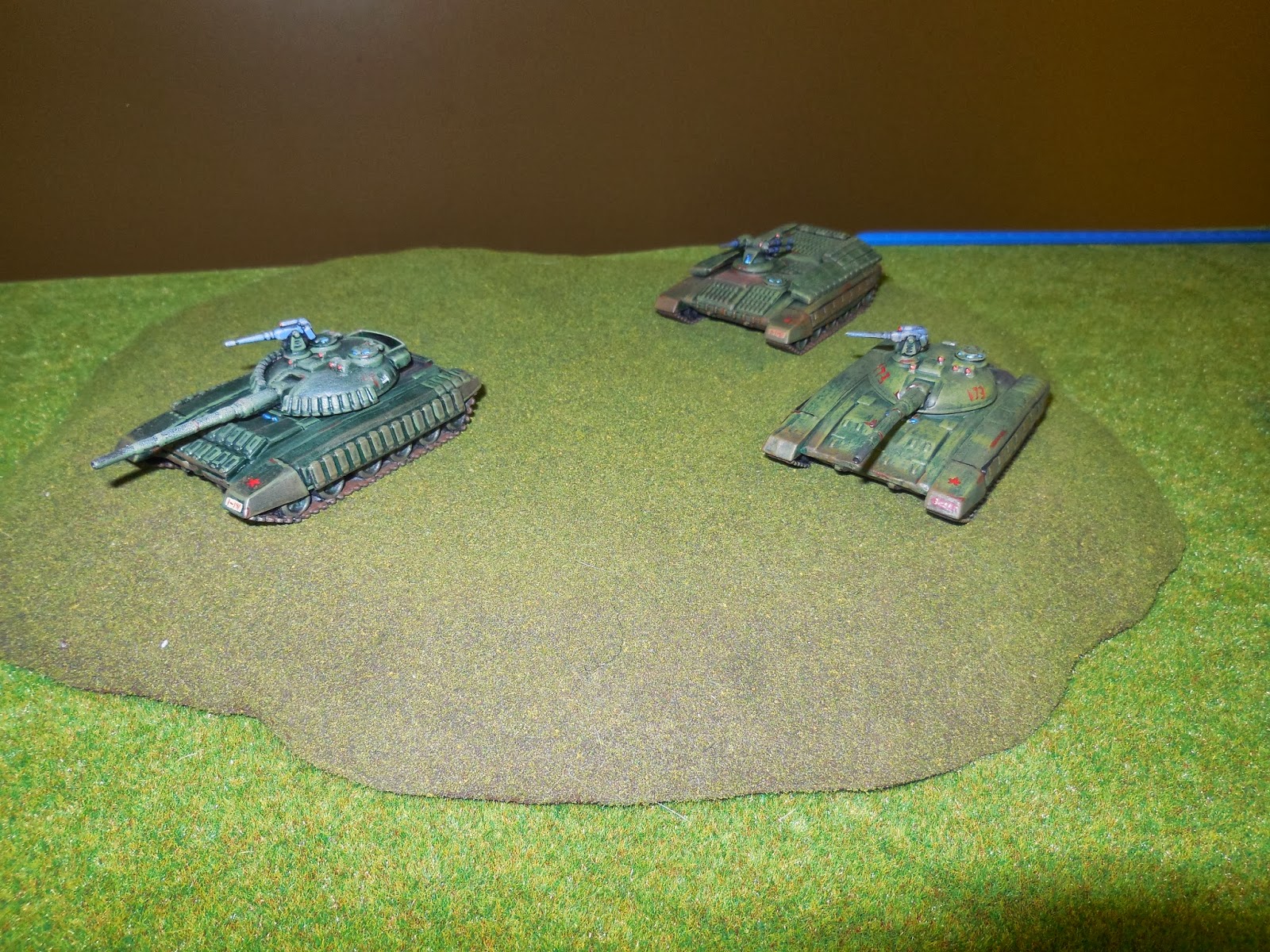 Across the table, Not-Nova Respublik tanks and APC. 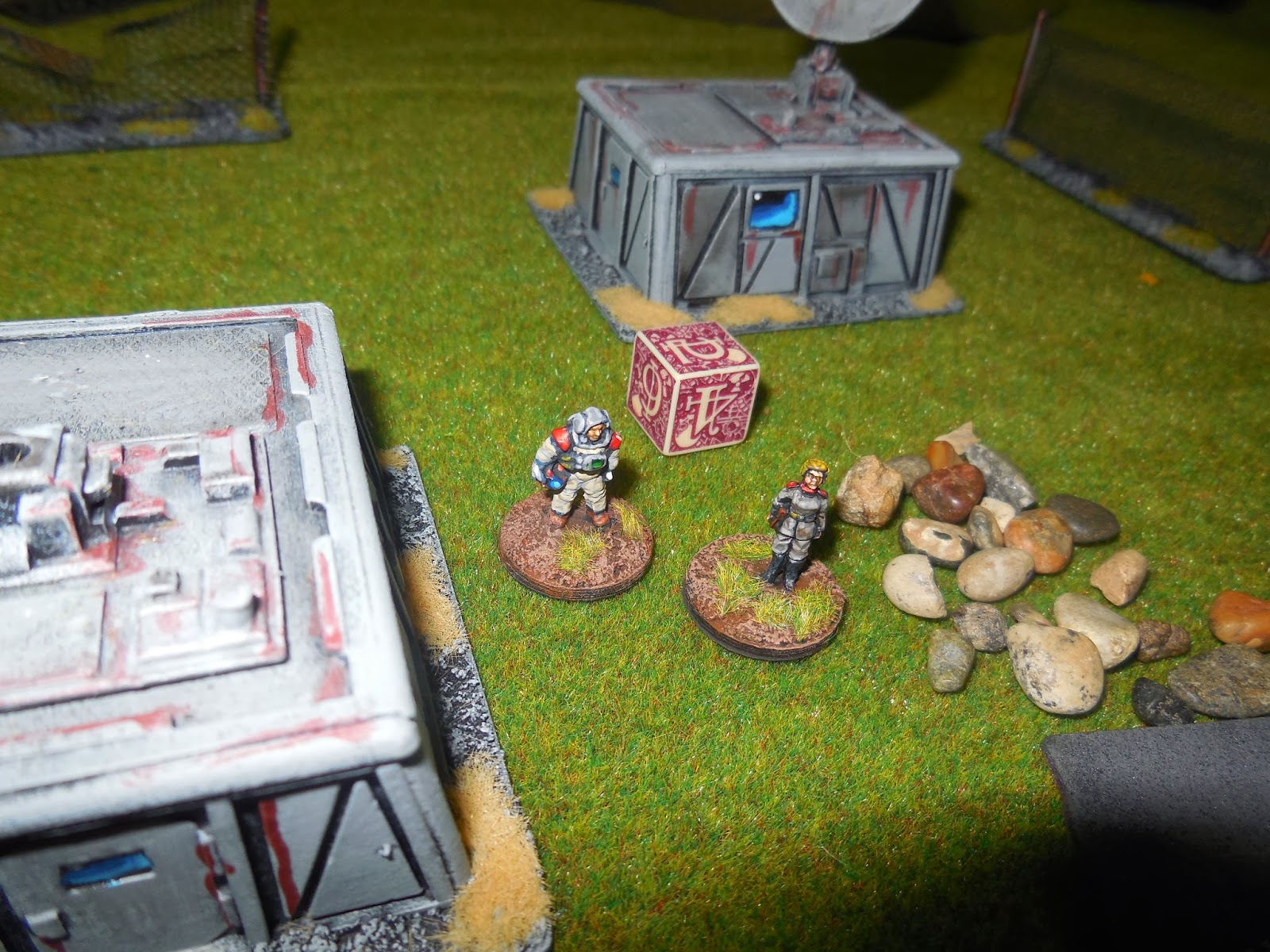 Some hapless worker/observers near the central objective. 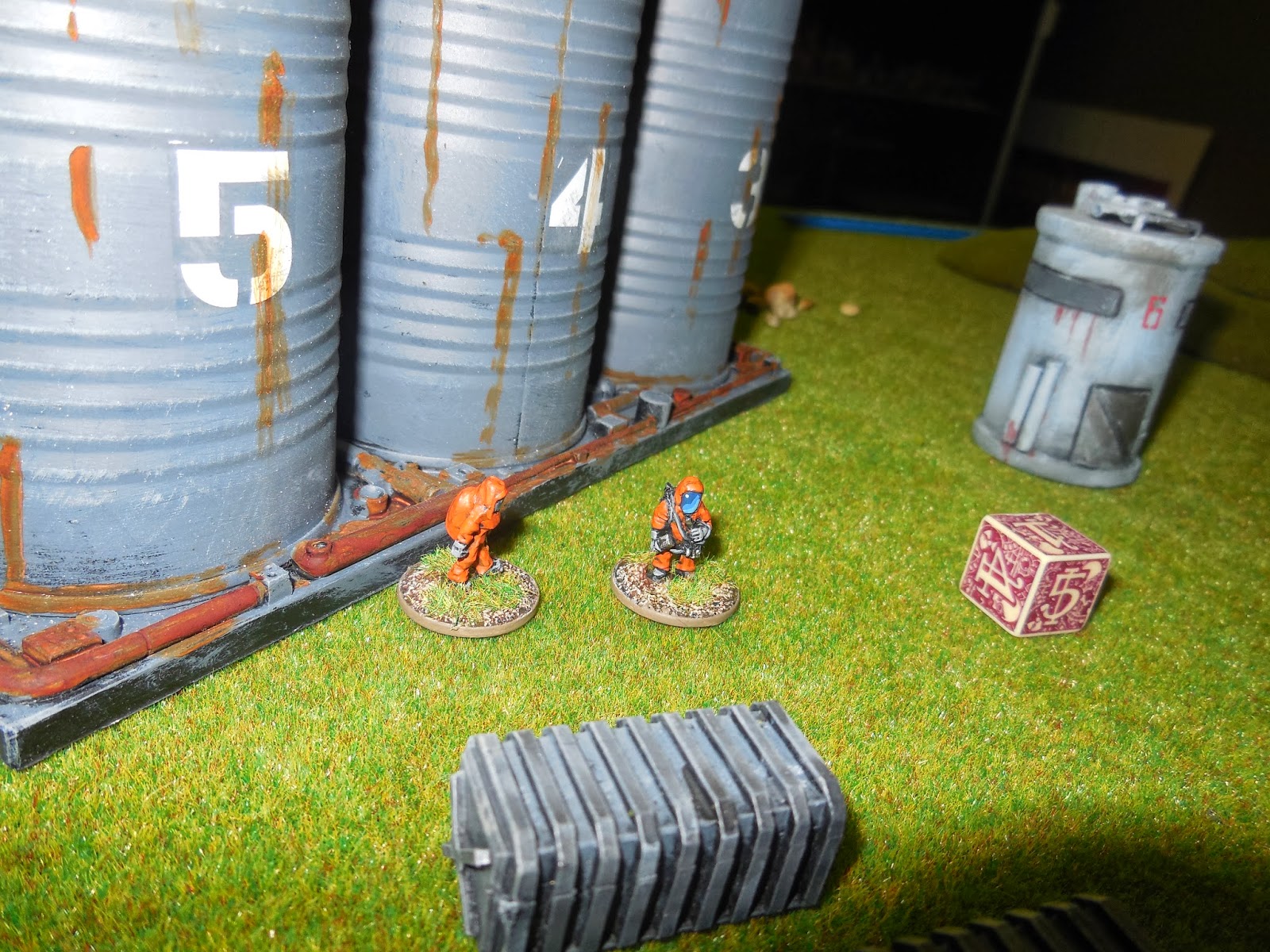 Sludge maintenance technicians keep an eye on the western objective. 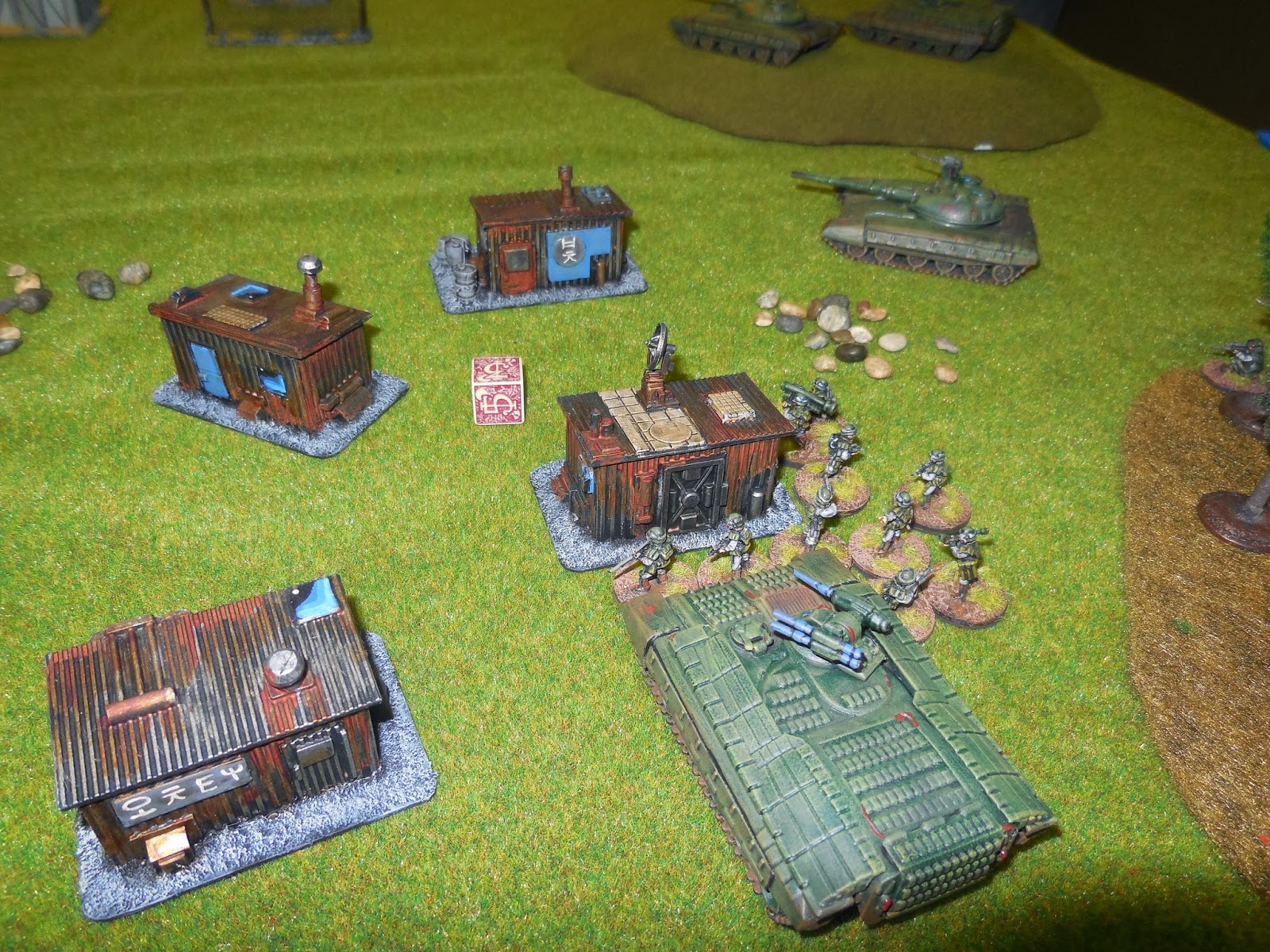 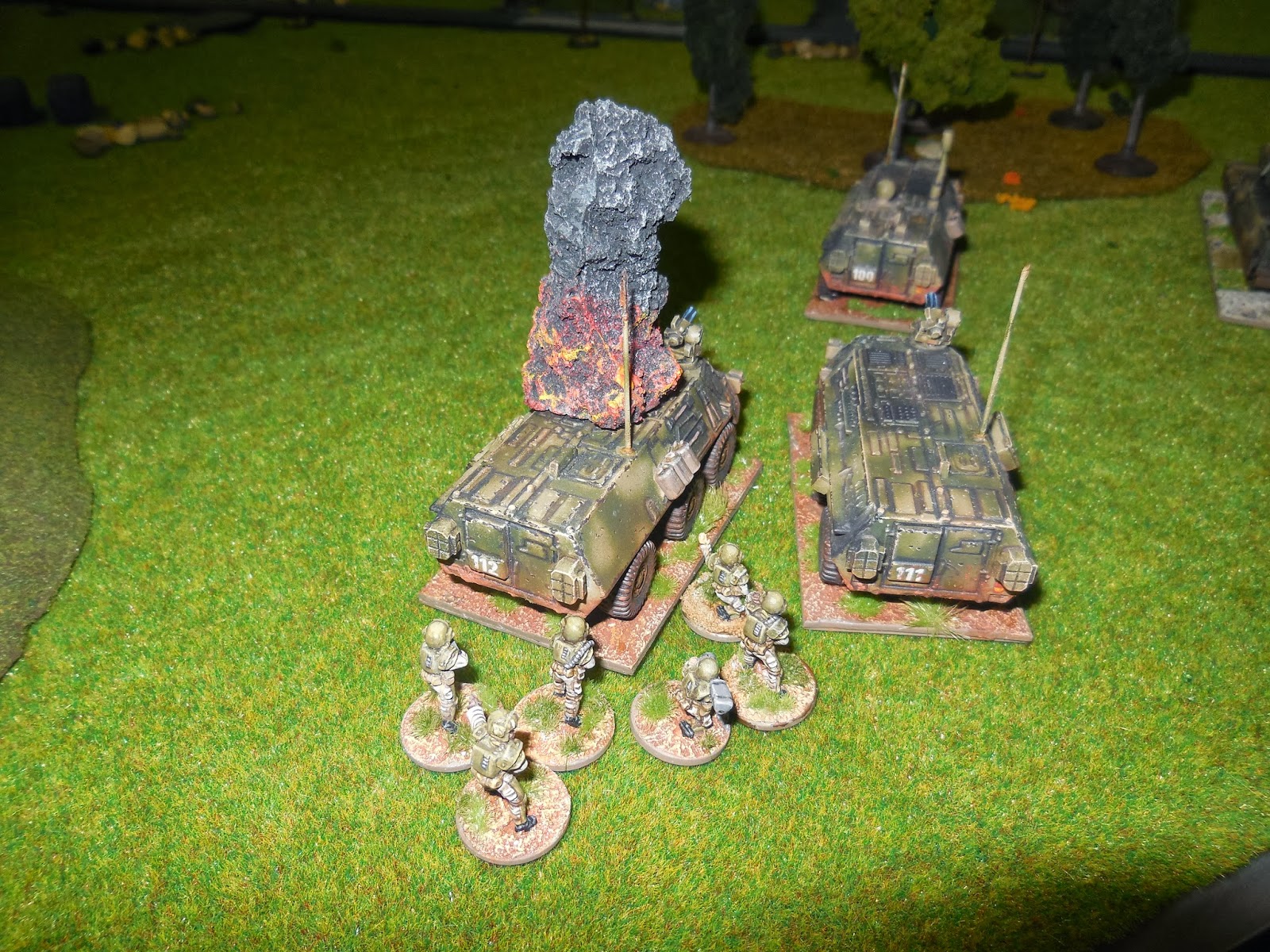 A long-range shot from a NNR tank blows up a Euro APC. 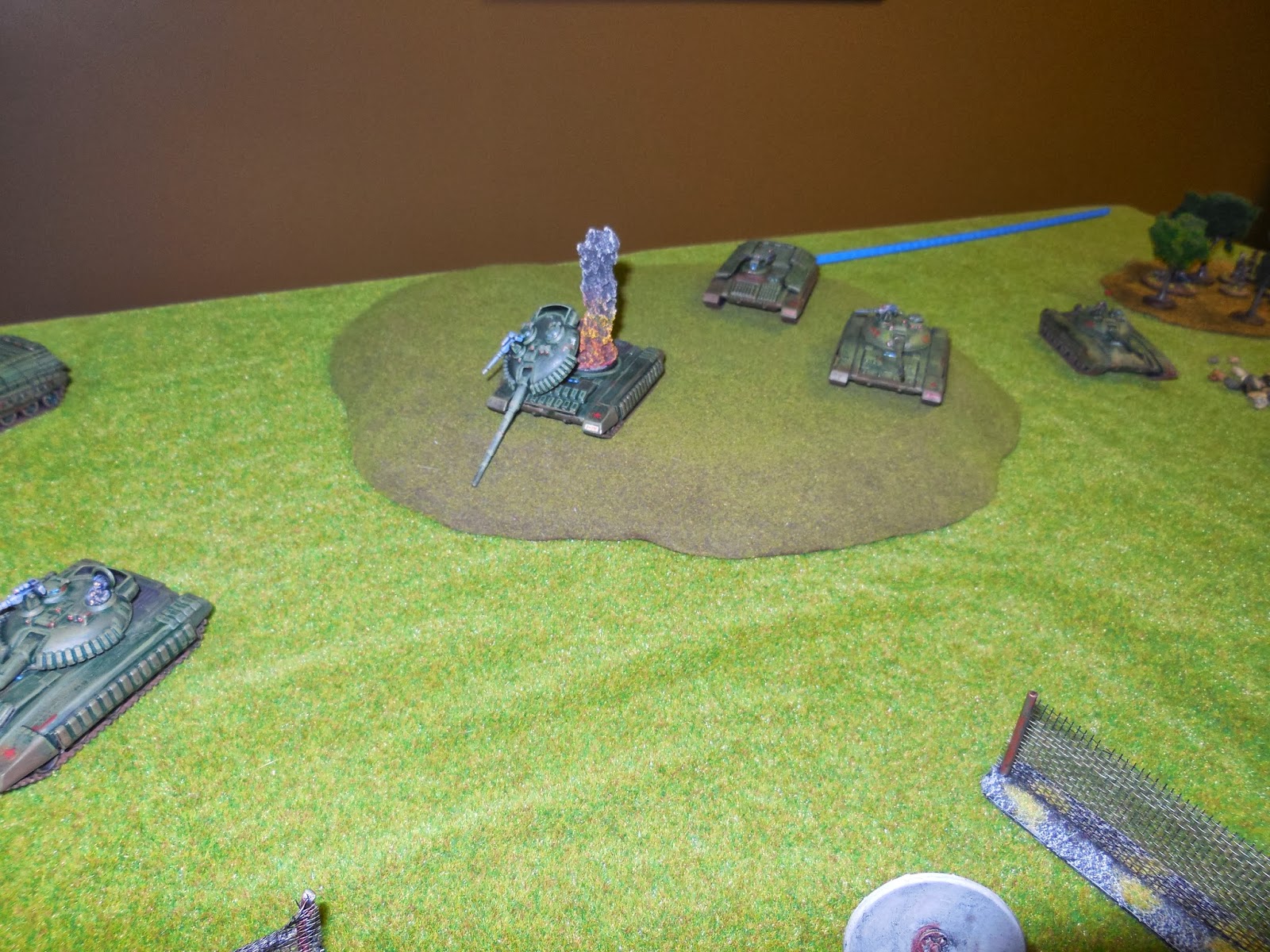 NNR tank destroyed in retaliation. It's a shooting war now! 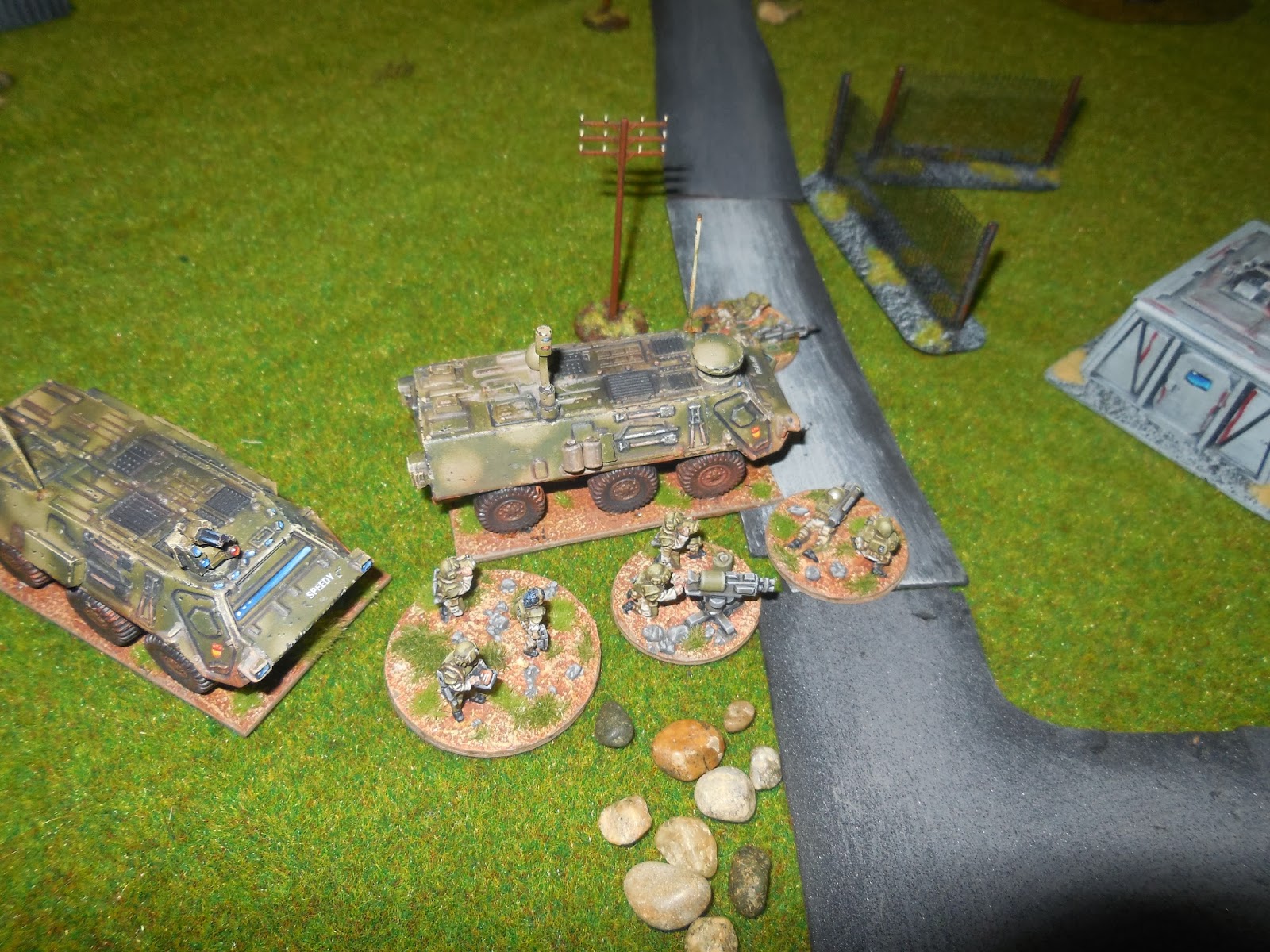 Euro troops move on the central objective. We used our home-brewed "Red Storm!" modern rules for the game and it really rattles along. Stuff blowing up every turn! 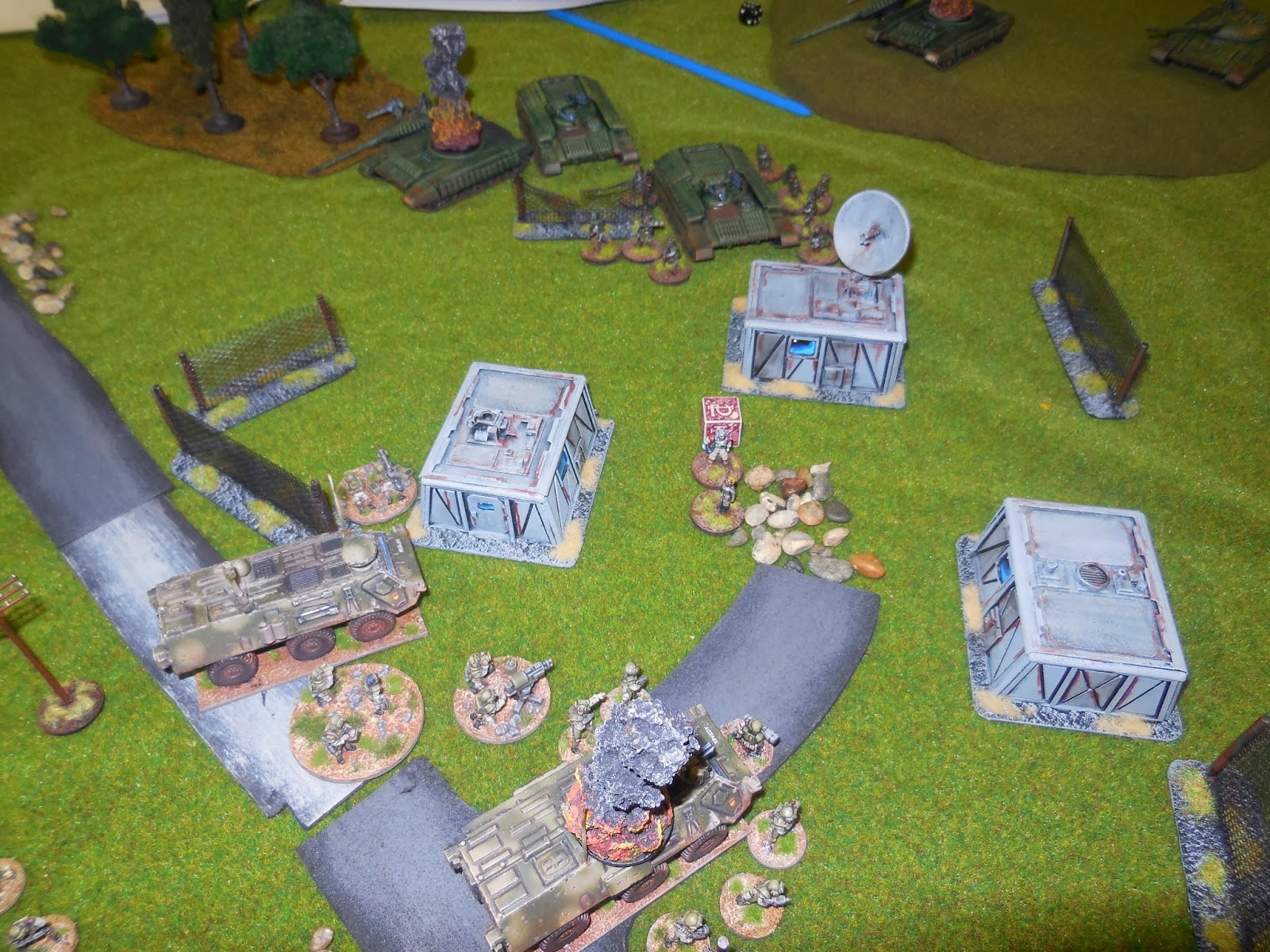 Euro heavy weapons deploy in the centre; another APC blows up :-( 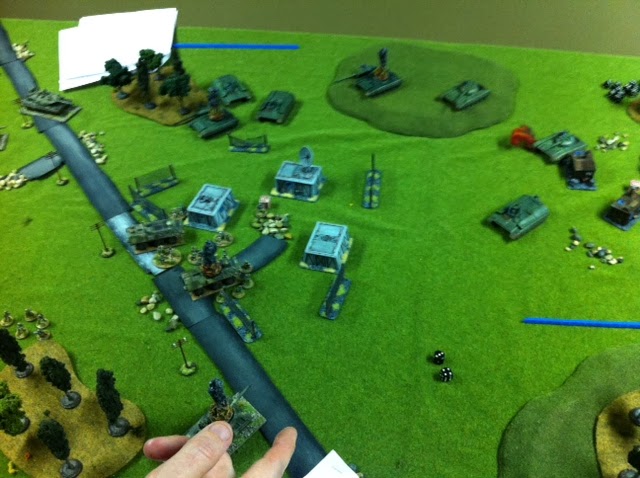 Zoom out... NNR attacking from the top of the photo. 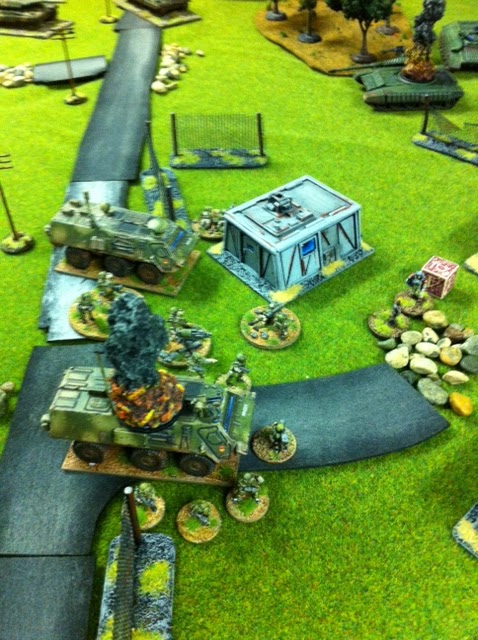 A nice image of the scrum in the centre with Euros pinned down by NNR firing. 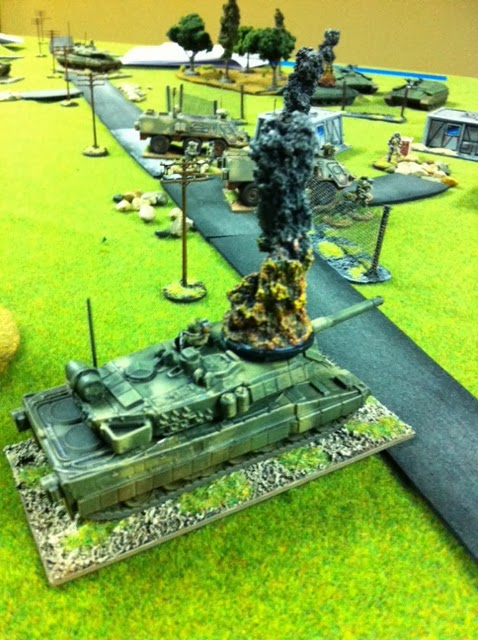 Euro Leopard brewed up... where's the rest of our tanks? Over on the left flank with Jim. "Come in Jim..." 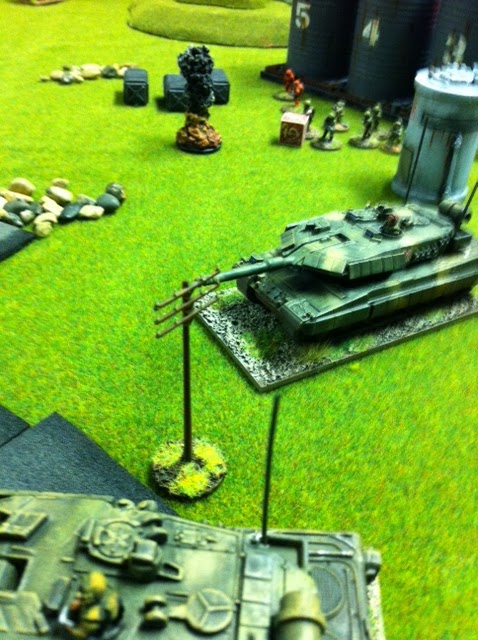 Here we go - Leopards on the move. 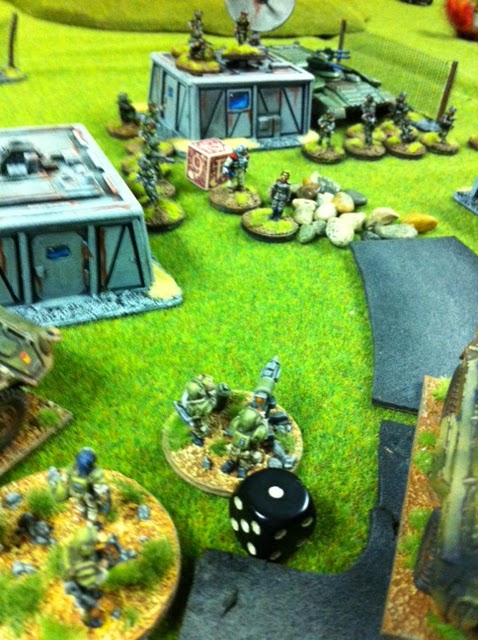 Will it be too late for the guys on the centre objective? Here come the NNR... 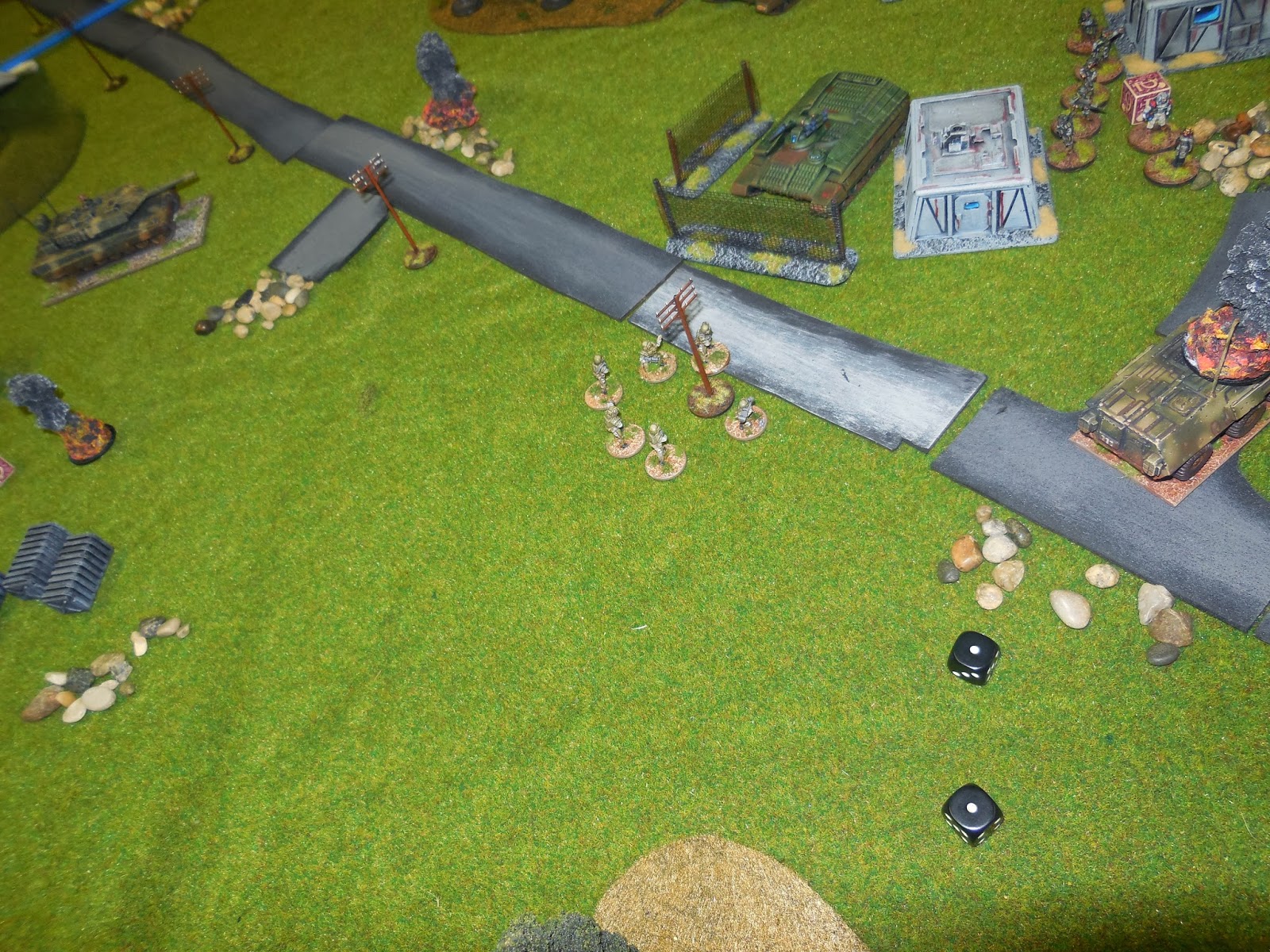 Epic fail on the spotting roll by Jim. In the rules, armoured vehicles need to spot a target before engaging. The player rolls 2d6 and adds the Training value of the troops and any modifiers for moving or obscured vision. An adjusted roll of "10" or more means the target is spotted. This was Jim's third roll of snake-eyes this game... my basement drywall suffered accordingly from thrown dice. Easy Jim!!! ;-) 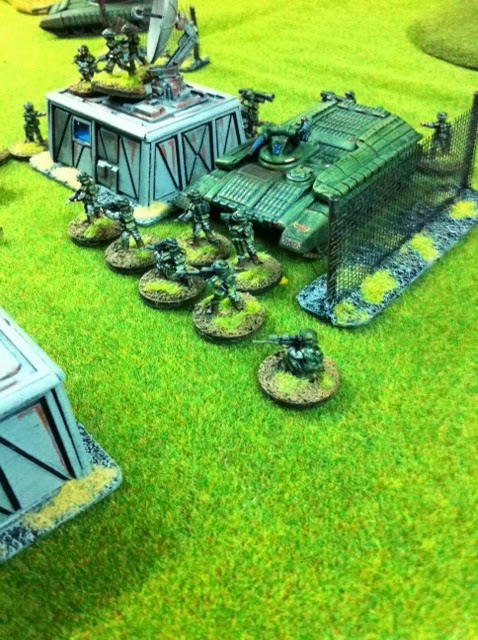 NNR about to take their second objective for the win. A fun game! I always like playing 15mm sci-fi and with a larger game like this one, the Red Storm! rules work well. Not too complicated but with a dash of modern design flavour in that they're not strictly IGO-UGO. Good times!
Posted by Dallas at 10:13 AM

It's always fun playing your "ripped from the headlines" scenarios; I had a blast.

Now they need Future!AngelaMerkel to broker a ceasefire.

Of course, the Nova Respublik denies all knowledge of any military activity in Bezerkostan. The only Nova Respublik elements in this troubled nation are peaceful relief workers...

Great looking game, but i have to say that it was the setting description and pre-amble that really put a smile on my face- congratulations!

Lovely figures and a topical setting!