Check Your 6! - Breaking the Luftwaffe Campaign

Feb. 20th saw the latest installment of Bill and Jamie's Check Your 6! campaign. This long-running campaign has seen the 8th Air Force players winning the majority of their games against the hard pressed Luftwaffe. 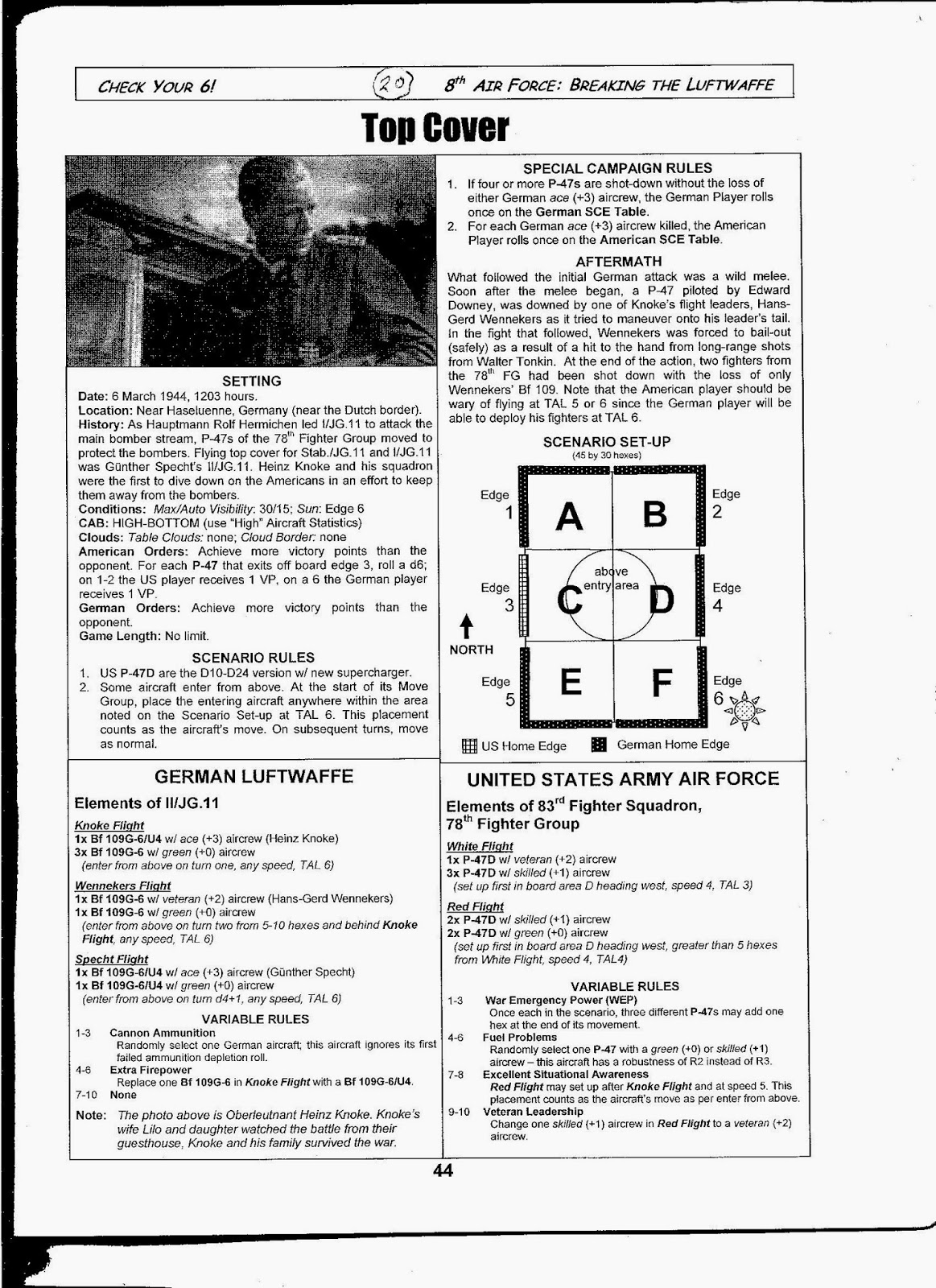 Unlike our last several games, this scenario was a straight up dogfight, pitting 8 P-47 Thunderbolts against 8 Bf-109G's. However, only 3 of the German aircraft had 30mm cannons, the only weapon type amongst the involved aircraft that had a chance of destroying the tough P-47's.

Below, Glenn, DaveN, and Jamie contemplate the developing situation.


Brian observes over BillC's shoulder as two German rottes make the initial attacks; Brian and I each flew one of these two-plane elements, led by an ace (+3) pilot.

In a close-range exchange of fire, two American planes were shot down by the German aces'  heavy 30mm cannon, but Brian's ace was forced to take to his parachute.

My ace then ran out of 30mm ammo during another pass, as the Germans lost another plane.

Conscript Kevin flew brilliantly, setting up great shots. However, the dice were not with him. He missed by 1 pip on the dice at least 4 times, and the couple of times he did hit, he failed to damage the robust Thunderbolts. Meanwhile, the Germans kept losing plane...

Near the end of the game, my ace's wing man was trying to exit the board with a damaged engine. Seeing one of Bill's planes closing in for an easy kill, I invoked the "It's what he would have done" card and sent my ace head-on into Bill's guns, with only a pair of the Bf-109's mg's working. That German ace was lucky to just get knocked out of the fight with a damaged plane.

After that initial pass at the start of the game, the Americans didn't lose a plane. Conversely, the Germans ended up losing 6 of their 8 planes, with the majority of the German pilots surviving their bailouts. The Germans contented themselves with the thought that all these P-47's were stuck in with the Bf-109's, while somewhere else some FW-190's were tangling with the 8th Air Force bombers.

Yeah, I think my dice were truly cursed that night... :-(

Great looking game. I love the look and game play of check your 6. It looks so great with a ton of planes on the table.