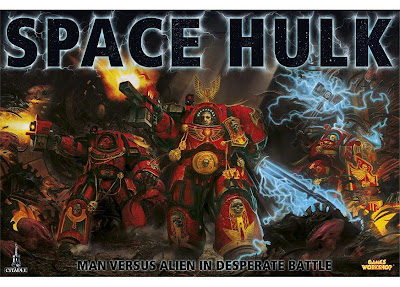 This past Christmas I was fortunate enough to get a copy of the new edition of Space Hulk from Sarah. A few weeks ago things calmed down enough for me to open it up and give it a go with both Dan and J. What a blast! The gameplay is very tactical, super-fast and brutal. I think we played the first scenario about ten times (over two separate sittings) with each playthrough being very different from the last. The game is very tough for the Space Marines to achieve their goals, which I really like as it reinforces that gothic horror feel of the 40K oeuvre (if it can be called such a thing). One can just picture the storm bolters blazing away, the power fists smashing down and alien ichor splashing against the wall - then the bolters jam, the fists hit empty air and things start to go horribly, horribly wrong...

Anyway, as I'm going to host a game next week for the boys I thought I'd better get the minis painted so it looks all spiff (and to take a much needed break from assembling/painting stacks of French Napoleonics). I first thought I'd just paint the Space Marine Terminators in the 'standard' Blood Angel chapter colours from the game's background. I admit that they do look pretty cool all decked out in red but I wanted to try something different with them. I thought that with these 'space hulks' originating from the Warp they would have as much chance of being tainted with Chaos nastiness as they would be infested with Genestealers. So I reasoned that if one of these hulks came into Imperial space reeking of Chaos then they would call in the heavy hitters from the Ordo Malleus to deal with any daemonic infestation: the Grey Knights. 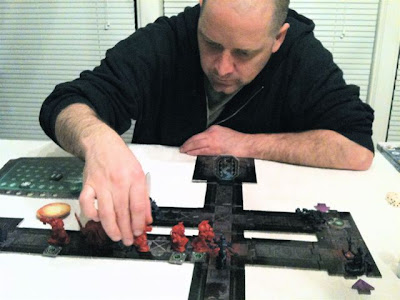 I started looking on the web to see the different colour schemes people were painting their Grey Knights and found some really spectacular uses of Non Metallic Metal techniques. I've never really tried this much as I have always thought that if its supposed to look like metal why not just use metallic paints instead of pulling your hair out with all the painstaking shading and blending. That being said I can appreciate the technique when its done to give a exaggerated, almost impressionistic, version of metal as opposed to trying to convey a photo-realistic rendition. 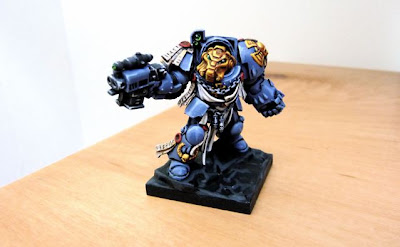 Anyway, I thought I'd give it a go and try to do a blue-grey, almost cell-shaded armour contrasted with gold details. Well, it was a bit of a learning curve to be sure, but on the whole I'm pretty satisfied with how the test model turned out. I had to keep a log of everything I was doing so I could replicate/tweek it in the future. Next I'm going to replace the Genestealer models with Chaos daemons (probably Bloodletters) and spice up the rules slightly to reflect all these badasses mixing it up in an abandoned spaceship.

"Brothers, I've got multiple pings on my scanner, coming in fast... Watch your sectors... Switch weapon safeties off, begin the Litany of Hate and prepare to cleanse... " Rock on, baby.
Posted by Curt at 4:17 PM