I'm continuing along with my Epic 40k re-base/paint-the-stuff-I-find-along-the-way project. In my horde of unpainted Epic stuff, I found a few Space Marine sprues and vehicles (sounds good) and two Space Marine Landing Craft (!) as well as two packs of the Epic 40k scale defence lines from Forge World (must have been purchased back in the Epic Tau splurge several years ago).

Strangely, I have almost no painted Space Marines for Epic, and that did not make any sense, because the recent Epic rules (both "Epic 40,000" and "Epic: Armgageddon") do such a great job at representing how tough the Marines actually are, you don't need very many models painted to make a very tough force.

With this in mind, I am adding a contingent of both "loyal" and "traitor" Marines(not Chaos Marines, but actual traitors) so we can play some classic Horus Heresey games. For the loyalists, I went with the Dark Angels chapter.

Here are some of the models Dark Angels, together with the recently completely set of defence line bits: 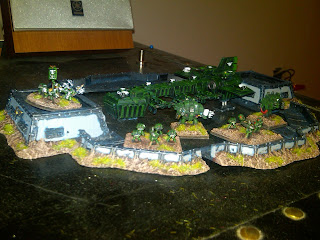 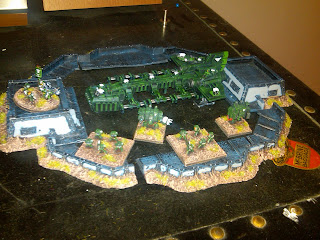 The big sucker in the middle is one of the Space Marine Landers (the other will be painted for the Traitor Chapter). In the rules it is designed to fill a role above that of the Thunderhawks (although the GW/Forgeworld folks seemed to have moved beyond it by creating the Thunderhawk vehicle transporters), carrying quite a few troops while also provinding heavy support. Its rules are very tough - it can make flyer/bombing runs, land troops (many of them - right in their vehicles), or just land and serve as a very tough fire base for the Marines. Plus it has the damage capacity of a Baneblade.

The model - issued in the wake of the "Epic: Armageddon" version of Epic - is not the greatest model made by GW, but still looks OK. Fellow Conscript Curt C described it perfectly once - a sci-fi version of the Chinook helicopter. So even though it is a little odd, I find it sits well with the Marine stuff.

I used one of the extremely cool Ninja Magic magnetic couplers on the model, so I will be able to develop a couple of different bases for it - one flying high (bombing run), one hovering, and one landed.

I really like the defence line stuff - should add to the look and feel of an upcoming Epic game!
Posted by Greg B at 10:44 AM