Opponent: Byron and his Dark Angels

Scenario: Setup was on a large rocky plateau. The table was divided into four quarters. A player could control a quarter if they had at least one scoring (i.e. Troops) unit in the quarter, and there were no enemy units contesting it.

The Dark Angels set up first, in the northwest quarter. They divided the Tactical Marines into combat squads, putting 5 Marines w/ the Missile Launcher on foot behind a ridge line, and the rest in the Rhino. The Land Raider, holding the Terminator Assault squad, set up at the south edge of the table quarter. The rest was held in reserve.

By the rules of the scenario, the Eldar could NOT achieve a Major Victory – my Swordwind had only two Troops available, the Dire Avenger squads. The Dark Angels now functionally had four Troops, and could potentially control all 4 quarters. Everything on the Eldar side was held in reserve, with the Spiders set to come on from the south board edge, not deep strike.

Turn 1 and top of Turn 2:
The Land Raider moved south into the southwest table quarter. The Rhino moved into the northeast quarter and got stuck climbing a ridge. Belial and his boys teleported behind the Land Raider. The Assault Marines jumped deep into the northwest quarter.

Stuff had to happen right away if the Eldar forces were to have any chance. The Autarch’s Master Strategist skill ensured that the Autarch, Farseer, Fire Dragons, Banshees and one squad of Avengers arrived.

Bottom of Turn 2:
The three Wave Serpents skimmed onto the southwest quarter in a variation of a Capstone formation (thanks, Dweomer!). The Fire Dragons’ boat spun around, dumping the Dragons out the rear near the Land Raider. The Banshee Serpent tucked in behind the Dragon boat, which shielded it from fire. The Avenger boat took up the rear. The Farseer and the Autarch jetted to the right of the Dragon Serpent. Everybody who could let loose at the Land Raider; a couple of the Dragons were even within 6” so they could use their Melta ability. After 10 Fusion Gun shots and a thrown Singing Spear, the Land Raider received exactly ONE “immobilized” result.

The jet bikers sped back off the ridge to save their hides.

Turn 3:
The Rhino and the ground Tac squad both shot missiles, which bounced off Serpent hulls. The Land Raider’s side sponson lasers failed to penetrate the Dragon Serpent’s force field.

Belial and his command squad moved south and shot up the Dragons. They then assaulted and wiped them out with Power Weapons and Power Fists. The Assault Terminators assaulted the Dragon Serpent, stunning it. The dead pilot's essence held in its Spirit Stone would allow it to at least move next turn. 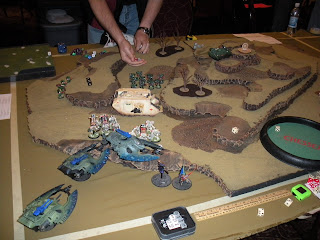 The second Avenger squad showed up. The Farseer tried to Doom the Assault Terminators, but she rolled an “11” on 2D6.

The Banshees disembarked and ran up the rise to face Belial and company. Their Serpent and the Dragon’s Serpent moved to the left and right of the Land Raider, both to try and shield the infantry from Missile Launcher fire, and to try and channel the movement of the Jump Assault Marines away from the upcoming scrimmage. The two Avenger boats moved into a delta formation. The Avengers disembarked yet again into a fighting wedge in between their two Serpents; they were shielded from a lot of fire, and enemy assaulters would be limited in how much power could be brought to bear. The Farseer moved to support the Avengers, and the Autarch moved behind the Marines to within charge distance of Belial’s men.

Both Avenger squads and three Wave Serpents poured all their fire into the close combat Terminators. With a double Bladestorm, that was 69 dice of various strength shuriken fire, plus a Krak missile. When the dust cleared, all five of the Terminators had been killed.

The Banshees and the Autarch charged the other Terminator squad, inflicting 36 Power Weapon attacks. All the Terminators but Belial died before the Marines could even swing. A couple of Banshees were killed by his sword, but the combat ended with a wounded Belial locked in combat, outnumbered 9 to 1. 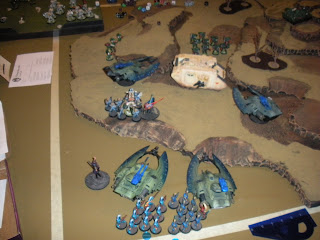 Turn 4:
The combat squad in the immobilized Rhino disembarked and ran off to the northeast. The Eldar would never be able to dig them out with the remaining time left. The Assault Marines jumped to the southeast, laying some plasma fire into the Serpents, to no lasting effect. The Land Raider and missile launcher dude again bounced shots off force fields.

Another saga should be written and sung about Belial’s last stand. (Do Dark Angels even recite such tales?) Belial failed enough saves to die a warrior’s death. Consolidation moves went north.

The Farseer Doomed the Tactical combat squad (finally!). The Banshees then ran towards these missileers. The Dragon Serpent moved 12” east. The Avengers all mounted up and their Serpents moved off at combat speed towards the north and east, respectively. The Banshee Serpent moved north, getting an angle on the jump troops. The two jet bikers then moved generally to the rear of the Land Raider. Concentrated Wave Serpent fire killed six Assault Marines, but their morale held firm.

The Banshees charged home and wiped out the Dark Angels combat squad. They then consolidated against the ridge line. 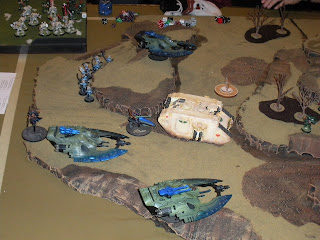 Turn 5:
The remaining combat squad ran further to the northeast. The Assault Marines jumped into the southeast quarter, shot up the rear armour of the Dragon’s Serpent, and put it on the ground. The Land Raider failed to even glance.

Up to now, the Spiders had been rolling "1" for their reserves. I forgot to bring them on for this final turn, but in the end it wouldn't have made a difference.

At the end of the game, each army controlled one quarter, and contested two others.

Result: Eldar and Dark Angels each claim a Minor Victory

Alex and Thurston, the convention organizers, put on a great tournament. Interesting scenarios, nice looking terrain, and everything ran on time. All my opponents played well, and I liked the look of the various MEQs I'd faced - interesting, themed armies.

Mike, the only other Eldar player, won the Best General award and came in Third Place. Byron, my last opponent, came in Second Place. I was fortunate to score enough on total Appearance, Sportsmanship and Battle Points to win Best Overall.

Thanks, Curt! There were some very cool armies and canny opponents out for the tournament.

Jen and I are in Toronto this weekend for a family visit and for me to play in Astronomi-con Toronto. I hope to post games and results next week.