Last night I set up a 28mm skirmish game set during "Operation Market Garden" - the Allied airborne assault that aimed to capture a bridge on the Rhine by coup-de-main. Our game was set on 19 September 1944, just after the Guards tankers of XXX Corps had linked up with American paratroopers of the 504th PIR. The combined Allied force's objective was to take the bridge at Nijmegen, and our scenario followed several tanks and an infantry platoon assaulting along Hell's Highway through the outskirts of Nijmegen. They had 8 turns to get across the table and exit the opposite edge to achieve a major victory. Historically the assault reached within a few hundred meters of the bridge but ground to a halt in the face of determined German resistance from elements of the 10th SS-Panzerdivision "Hohenstaufen". The refight ended similarly... mainly as a result of some appalling dierolling from the Allied players! (those were Greg, Mike B. and Cam, for those keeping score).
The Germans (Frederick, Mike F. and Brian) deployed an infantry section, MG42, sniper, and platoon command squad hidden on the table, infantry section well-forward. The American paras bumped into the Germans in the first turn and took some casualties - the Germans successfully pinning down one squad. The supporting paras retaliated with massed Garand and .30 cal fire, taking out 8 of the 10 man section. The fanatical SS survivors passed their morale test, and in their next turn emerged from cover and hosed down the pinned para squad, routing them off the table! Flushed with success, they then charged the para platoon command squad but their luck ran out and the Germans were wiped out. 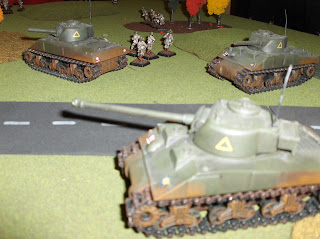 Meanwhile, the recce Dingo armoured car zipped out in front along the road, followed by the Shermans and Firefly. A German PaK40 AT gun was revealed, and knocked out the Dingo, with Greg's Shermans next in their line of fire. Unfortunately for the Germans, Cam's paras were advancing on their flank, and after some confusion (and shouted orders/"encouragement" from Greg) the paras took out the AT position. 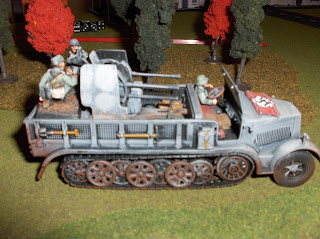 As the Allies advanced, more Germans arrived from reserve - a Pzkpfw.IV and a heavy halftrack with quad 20mm. The quad was positioned for a flank shot on the lead Sherman and after some lucky dierolling by Frederick the Sherman was knocked out. Sadly for Greg his remaining tankers suffered from chronic failures to spot the enemy and once spotted, to hit anything. "Don't these *bleeps* know there's a WAR on???"
Cam's men continued to work their way down the flank and despite some confusion regarding number of dice to be rolled and when to roll them, they succeeded in reaching the objective and exiting the table. (To be fair to Cam he'd written his last examination the previous day and had been "celebrating" the night before).
As for the rest of the Allies, things went from bad to worse. A German Panther showed up and shot up the remaining Shermans... a German victory but I think that the Allies did no worse than they had historically ;-) 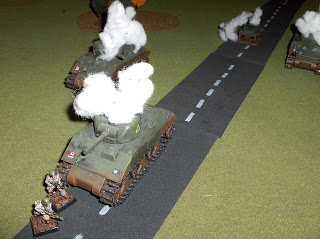 Cheers,
Dallas
Posted by Dallas at 9:04 AM

Now, I'm not one of those generals that gets all caught up in winnipeg battles. But technically, Cam's infantry DID break through the German lines (despite my atrocious armoured "support"). Who's to say this half-section of paras did not push on to Arnhem, link up with the British 1st Airborne, and then jointly spearhead a drive into Germany that saw the Ruhr industrial region captured and the war ended by Christmas? Maybe it was a complete victory for the Allies?

You know, Greg has a point there...

As Dallas indicted in his report, the battle was decided by very unlucky dice on the Allied side rather than poor tactics. I was sure that our Panzer Mk IV would be toast within a turn or two given that it was facing 3 Shermans, one of which was Firefly, but the dice did not favour the Allied armour.