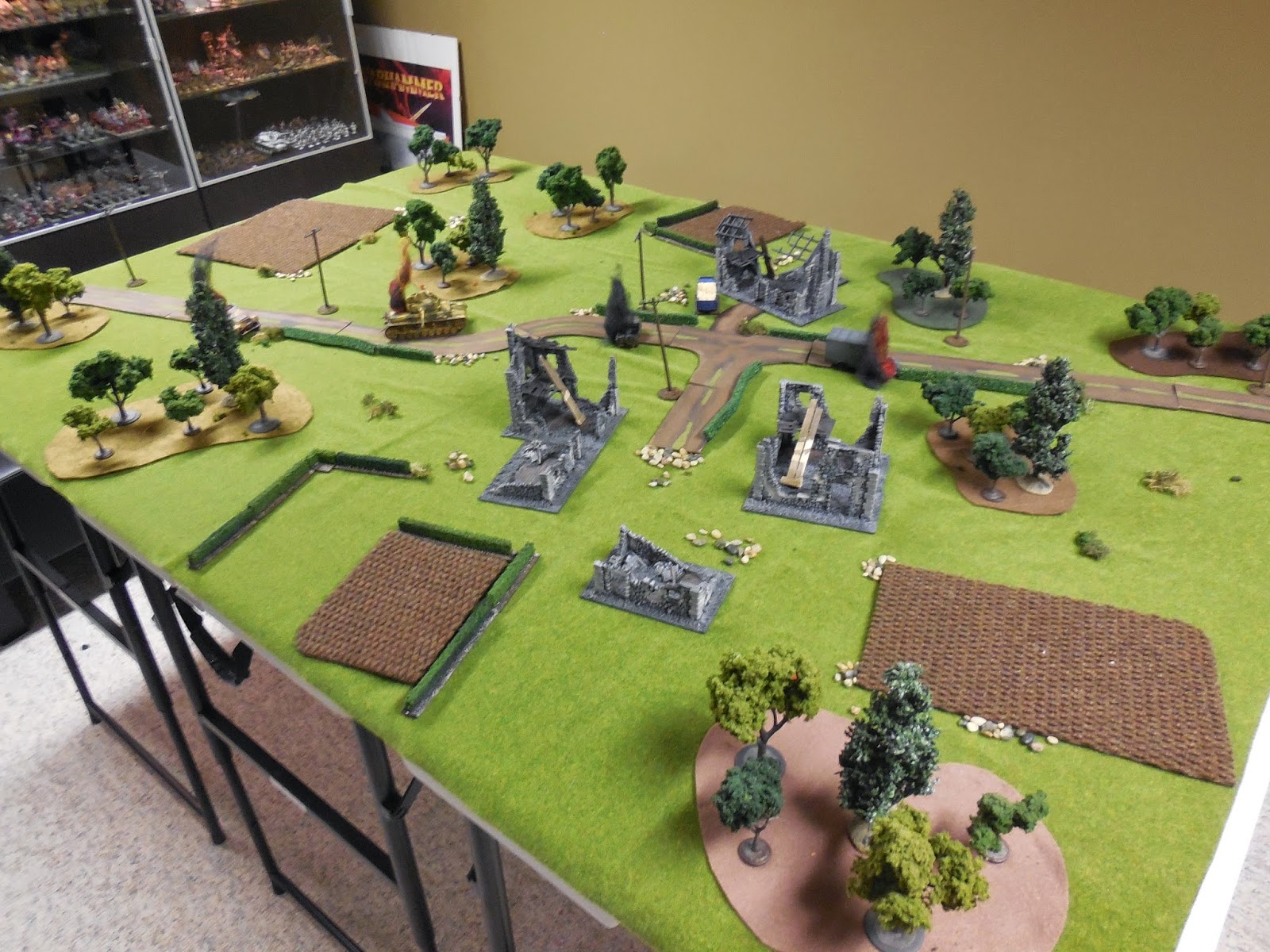 Last Thursday Conscript Greg suggested we roll out a 28mm WW2 battle set around Operation Market Garden. As I have both British Paratroopers and Waffen-SS that haven't been exercised in awhile, I thought this was a splendid idea, and deputised Greg to design a scenario... :-)

He obliged, and came up with a good one - a Waffen-SS armoured column is driving on the Airbourne battalion HQ in Oosterbeek. The British have sent an ambush force to destroy or slow down the Germans.

British forces are three sections of paratroopers, plus two PIAT teams, a six-pounder AT gun, and platoon command section. The Germans have two sections of infantry each in a Sdkfz.251/1, a Marder SP gun, a Panther tank (!) and a nasty Sdkfz. 7/1 tractor with mounted quad flak gun. The German objective was to exit as many vehicles as possible off the opposite short edge (top left in the photo above). 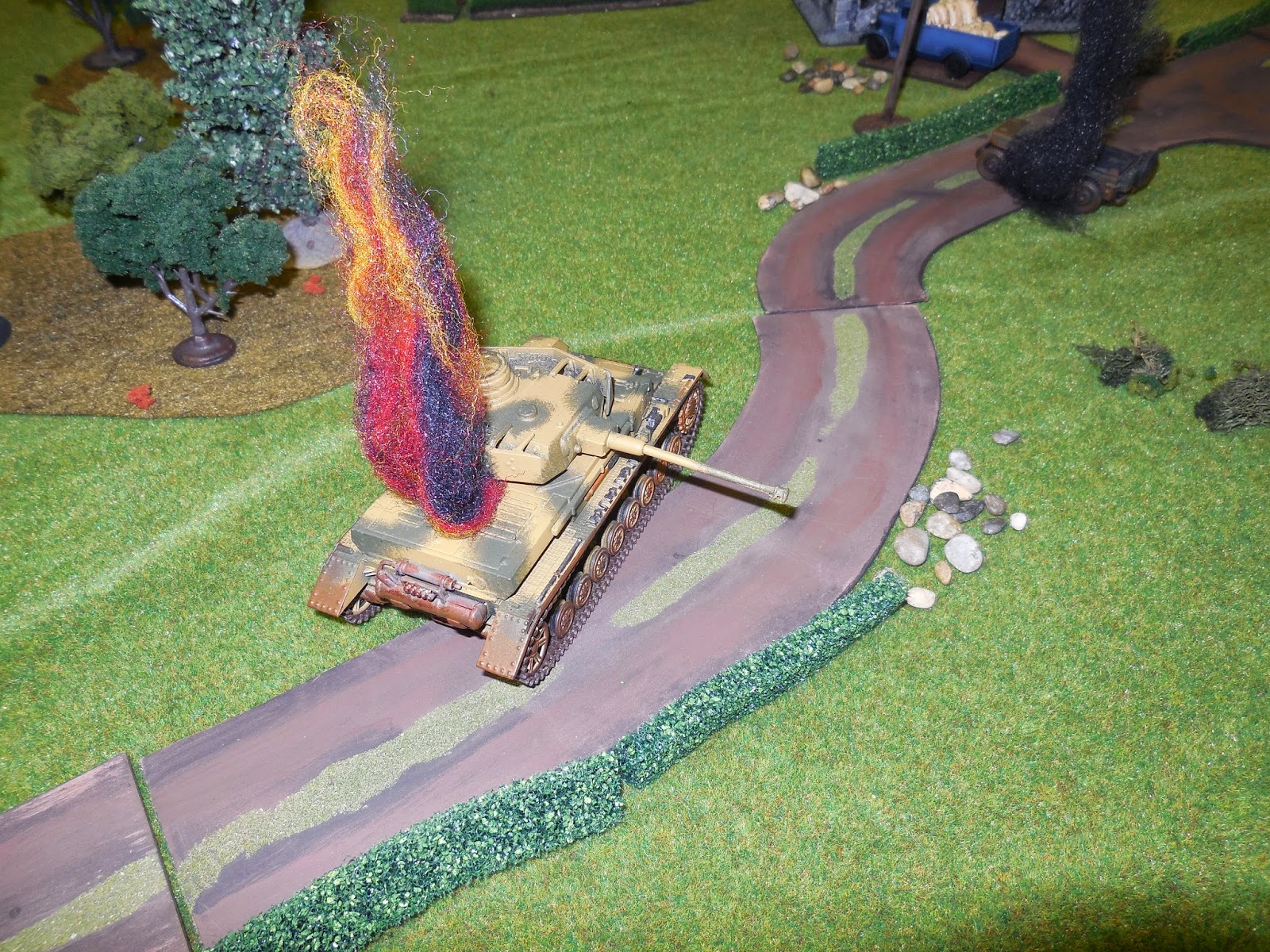 The battlefield showed evidence of previous fighting. We decided to use our home rules - Blitzkrieg! - both for ease of play and speed. 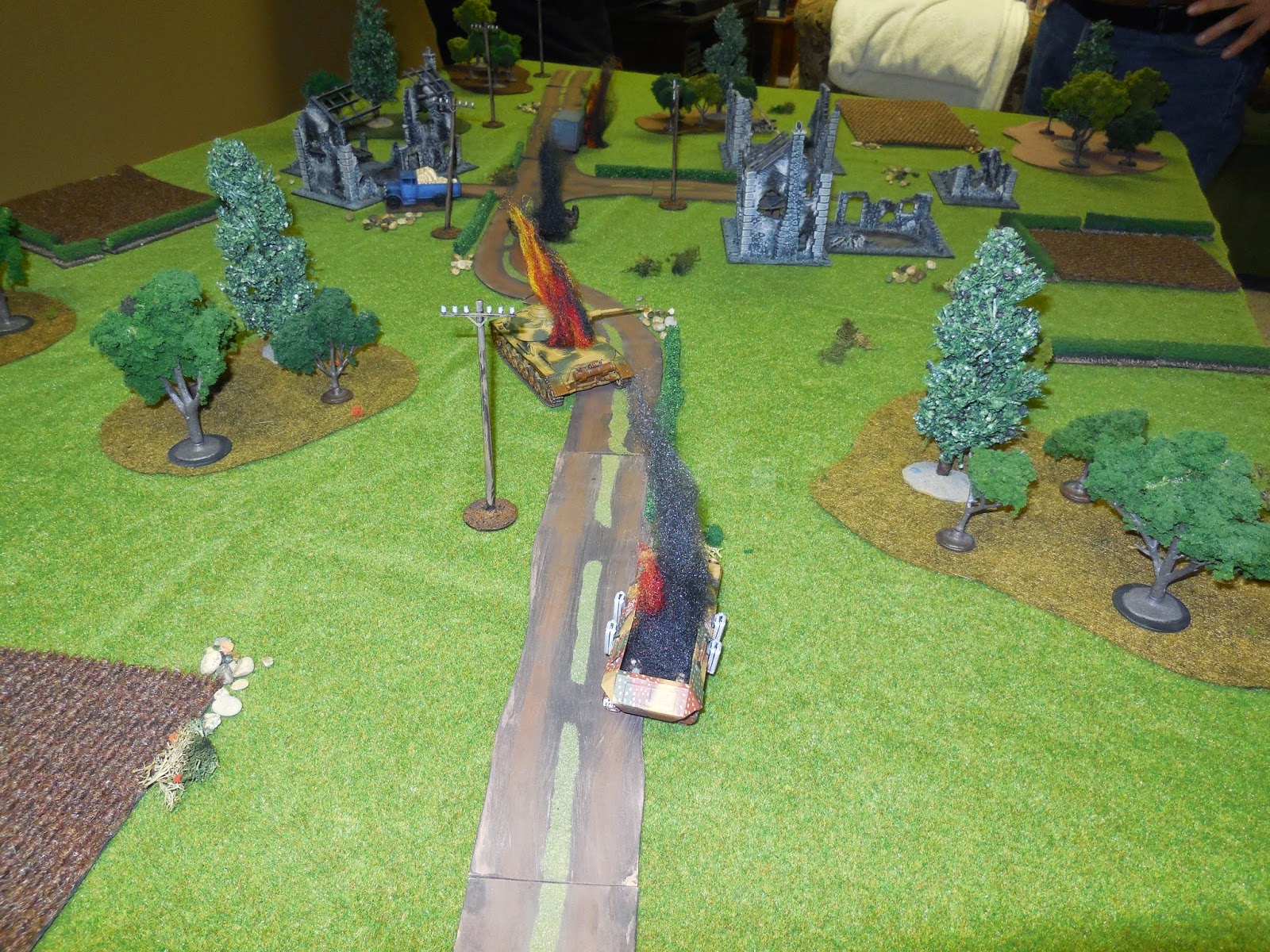 Burning Pzkpfw. Mk.IV and Sdkfz.251/1. The Germans deployed on the short edge at the top of the photo and the Brits got to deploy in "ambush" - basically, on their turn they could decide to appear anywhere on the table in area terrain at least 12" away from a German model, or if not in terrain, at least 18" from a German model, and out of sight. 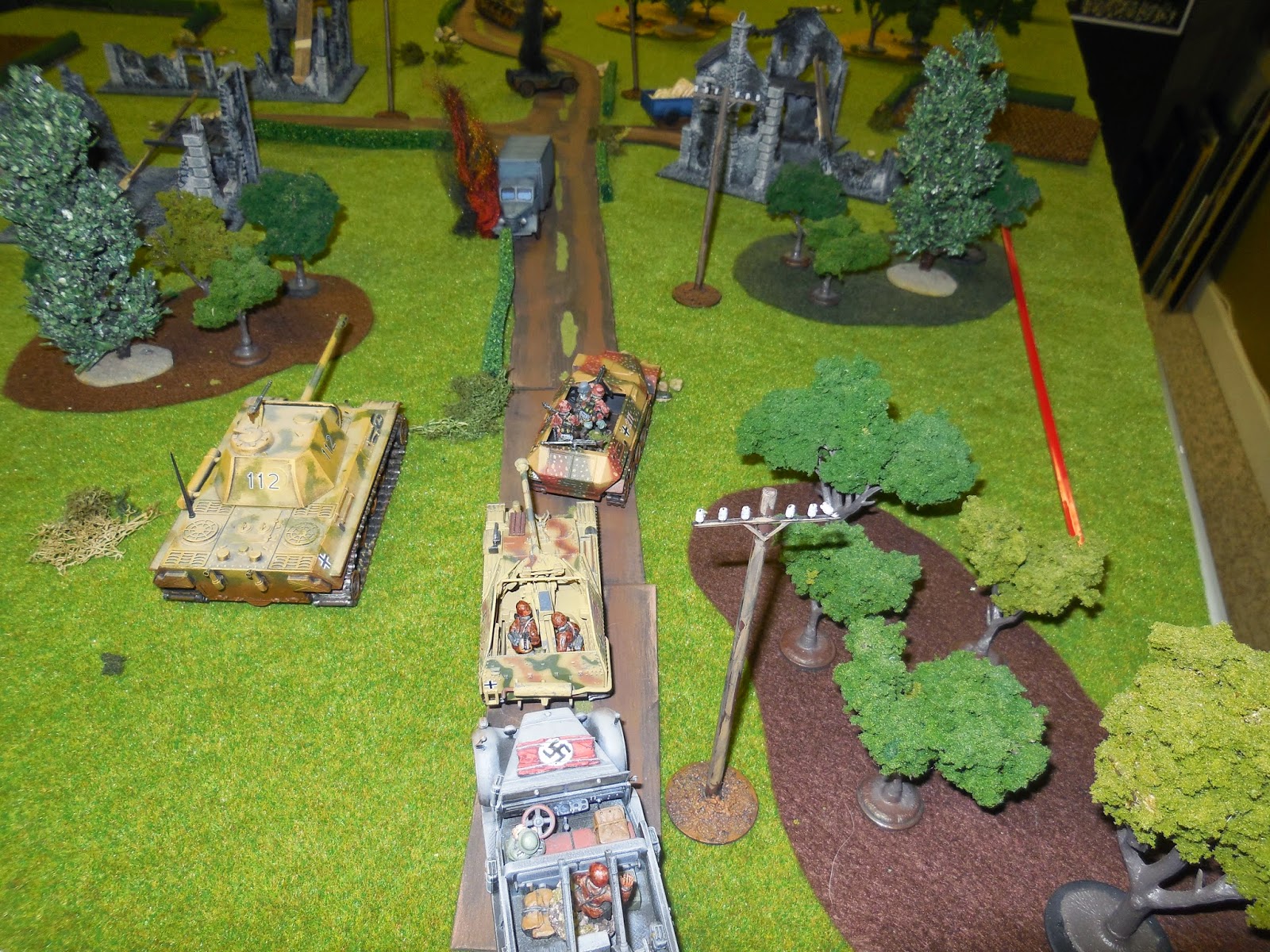 The German column rolls onto the table. Hugh and I took control of the German forces while Frederick and Keegan rolled with the Paras. Our other Sdkfz.251 moved out to the left, trying to restrict British ambush deployment as much as we could. 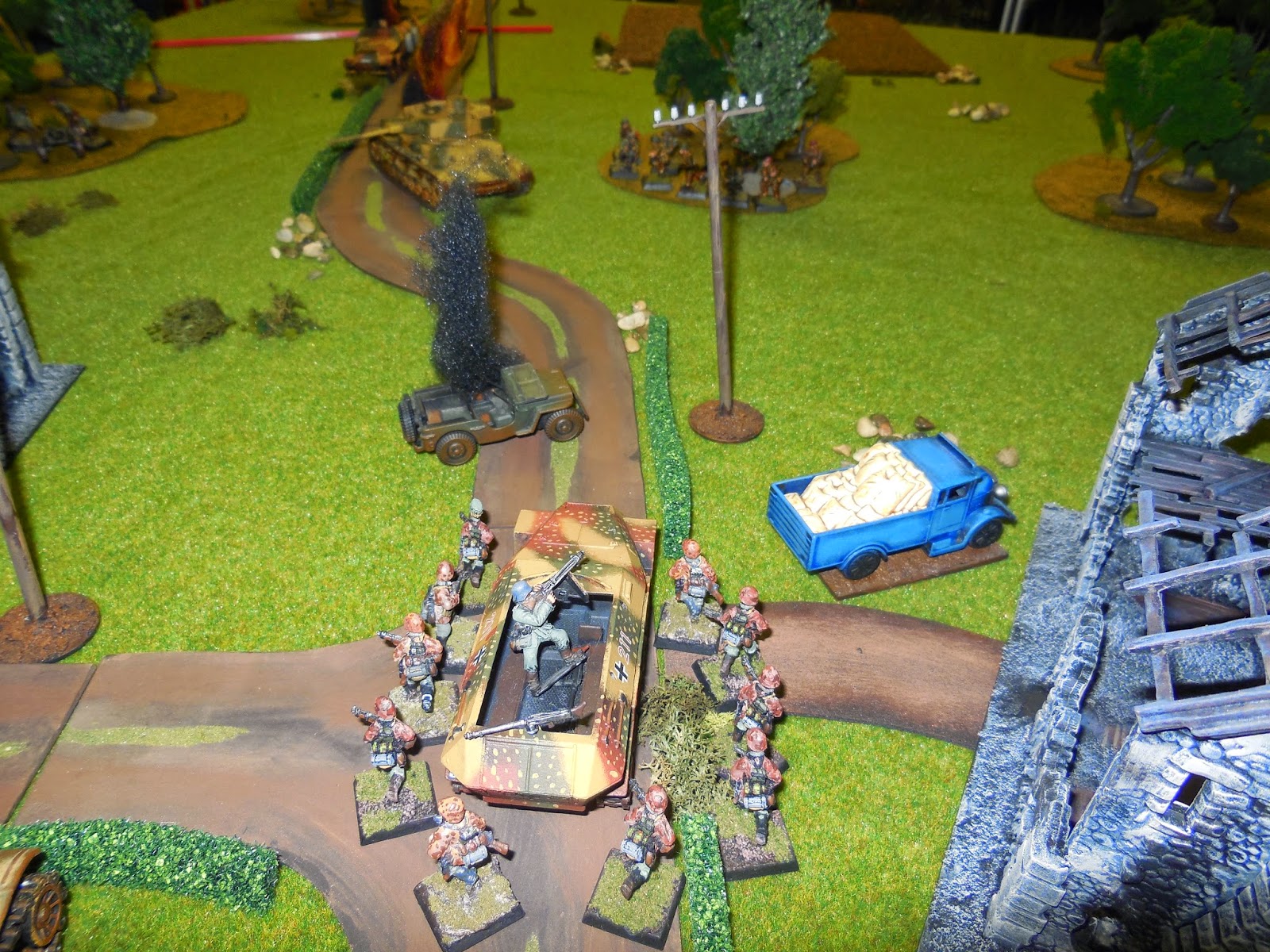 Enemy spotted - the Panzergrenadiers jump out of their vehicle and prepare to engage the paratroopers in the wood at top. 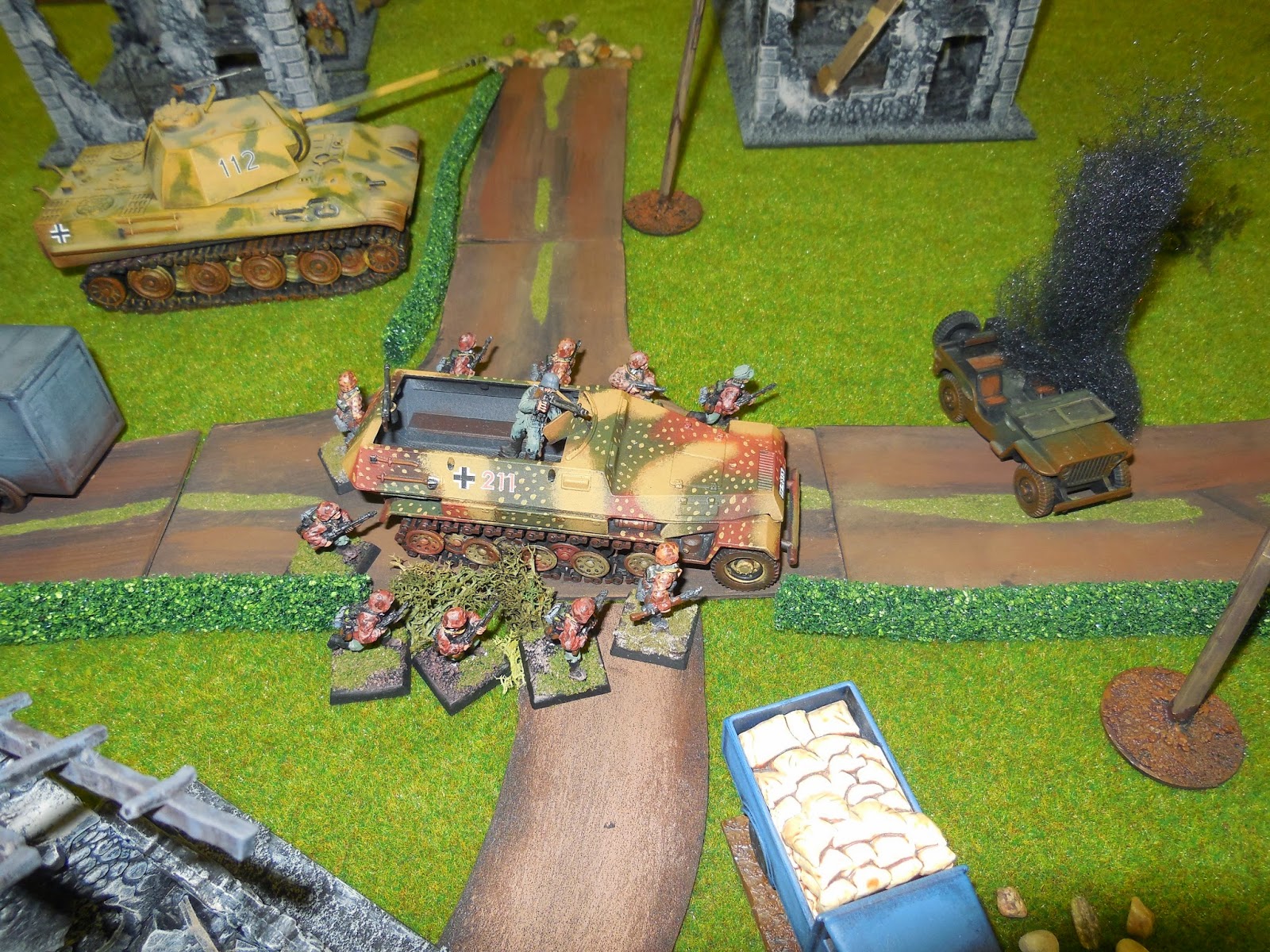 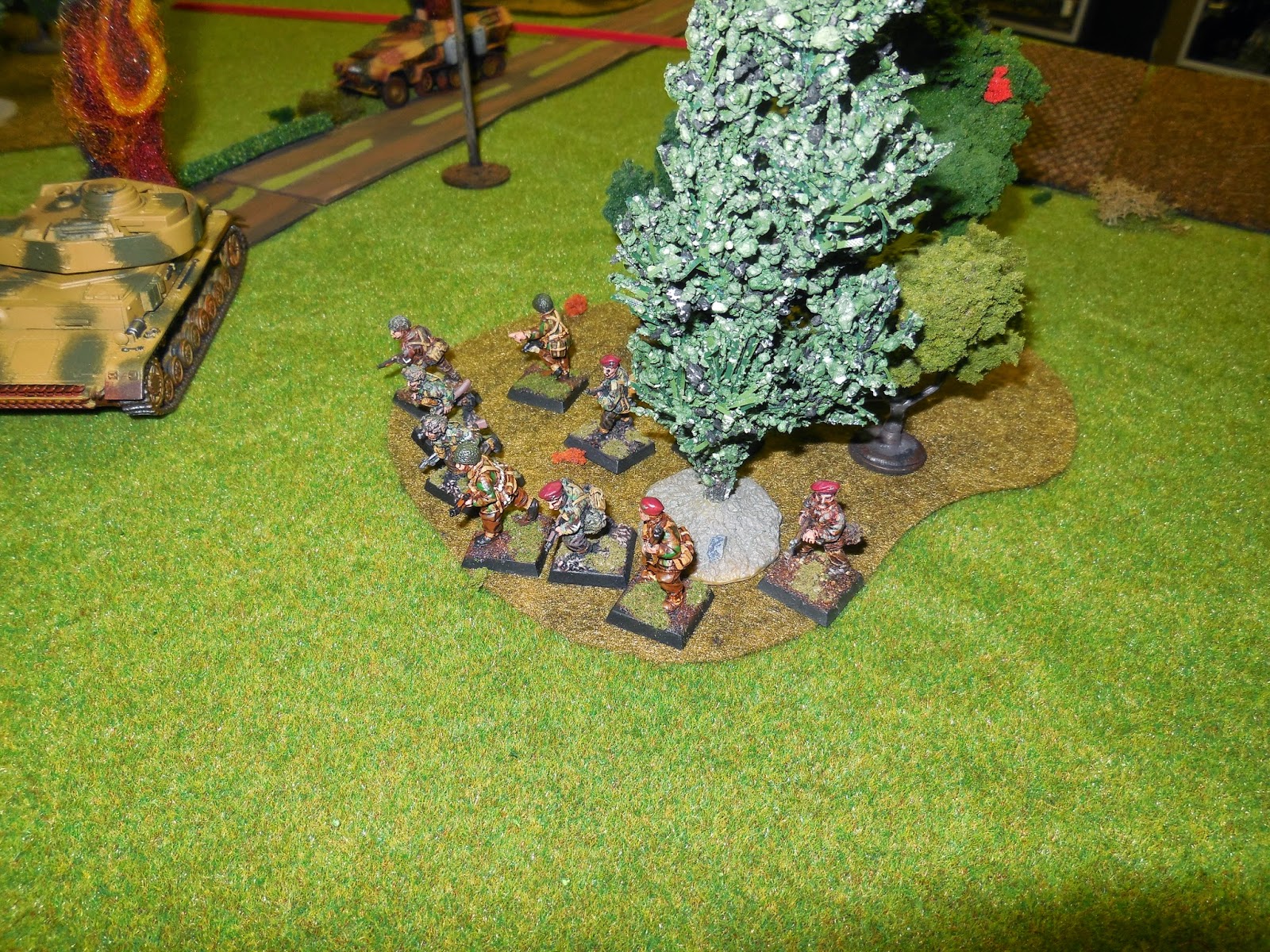 Paratrooper section deployed in the woods. 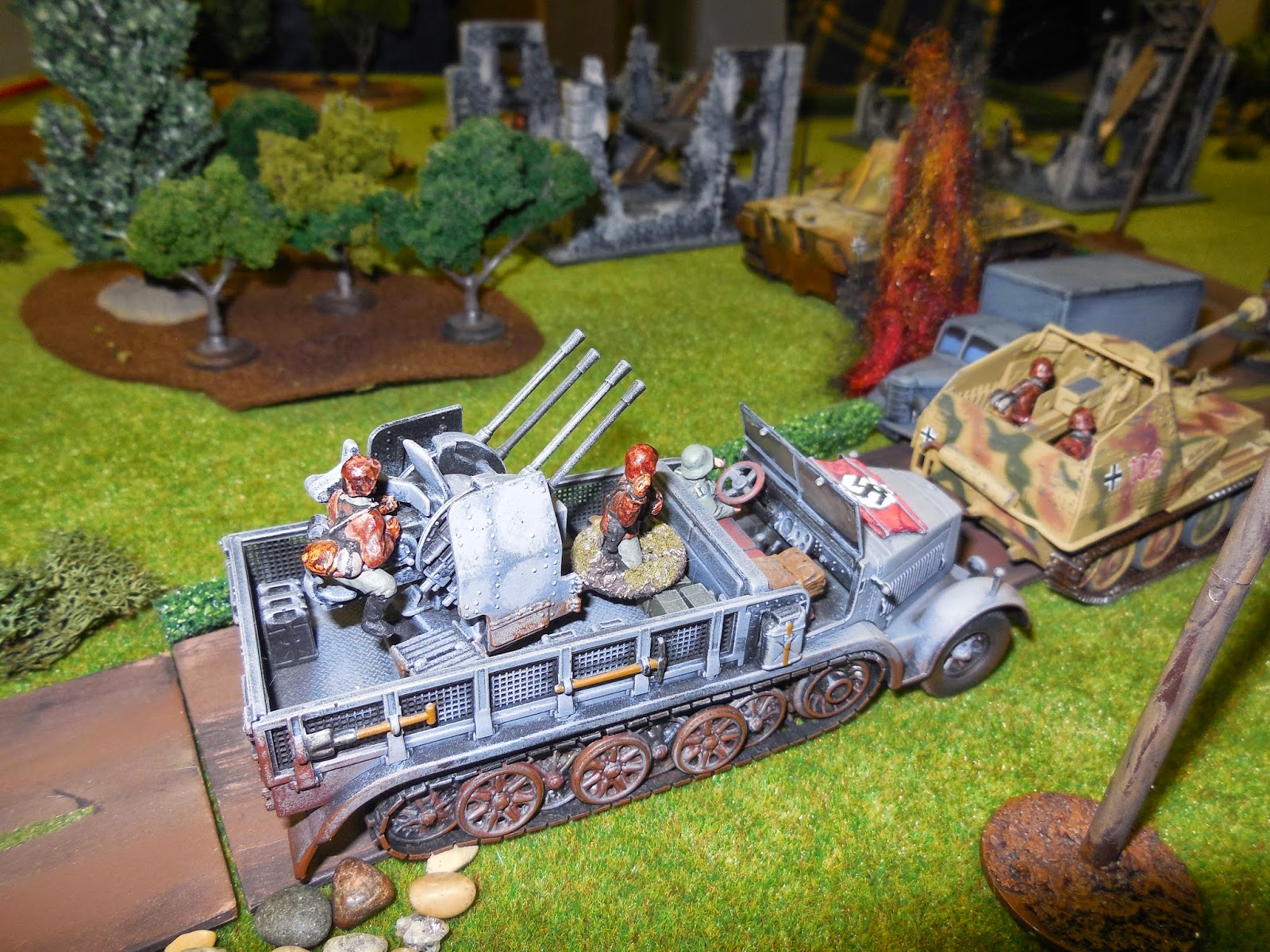 Meanwhile back in the column, the 7/1 with flakvierling follows up the Marder. 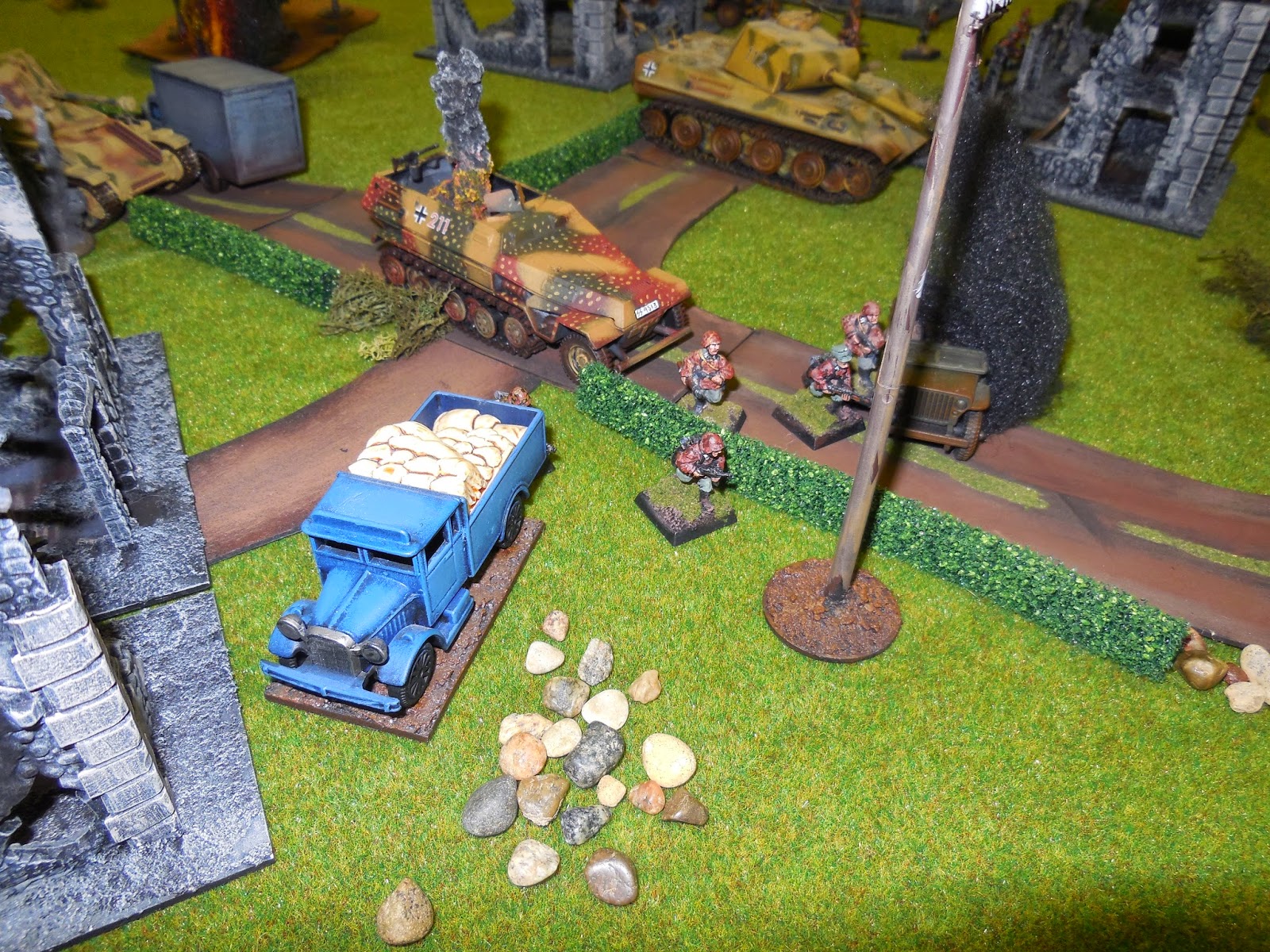 On the other side of the table there appeared the six-pounder which lit up the halftrack. Surviving Panzergrenadiers suffered from British rifle fire from the woods too. 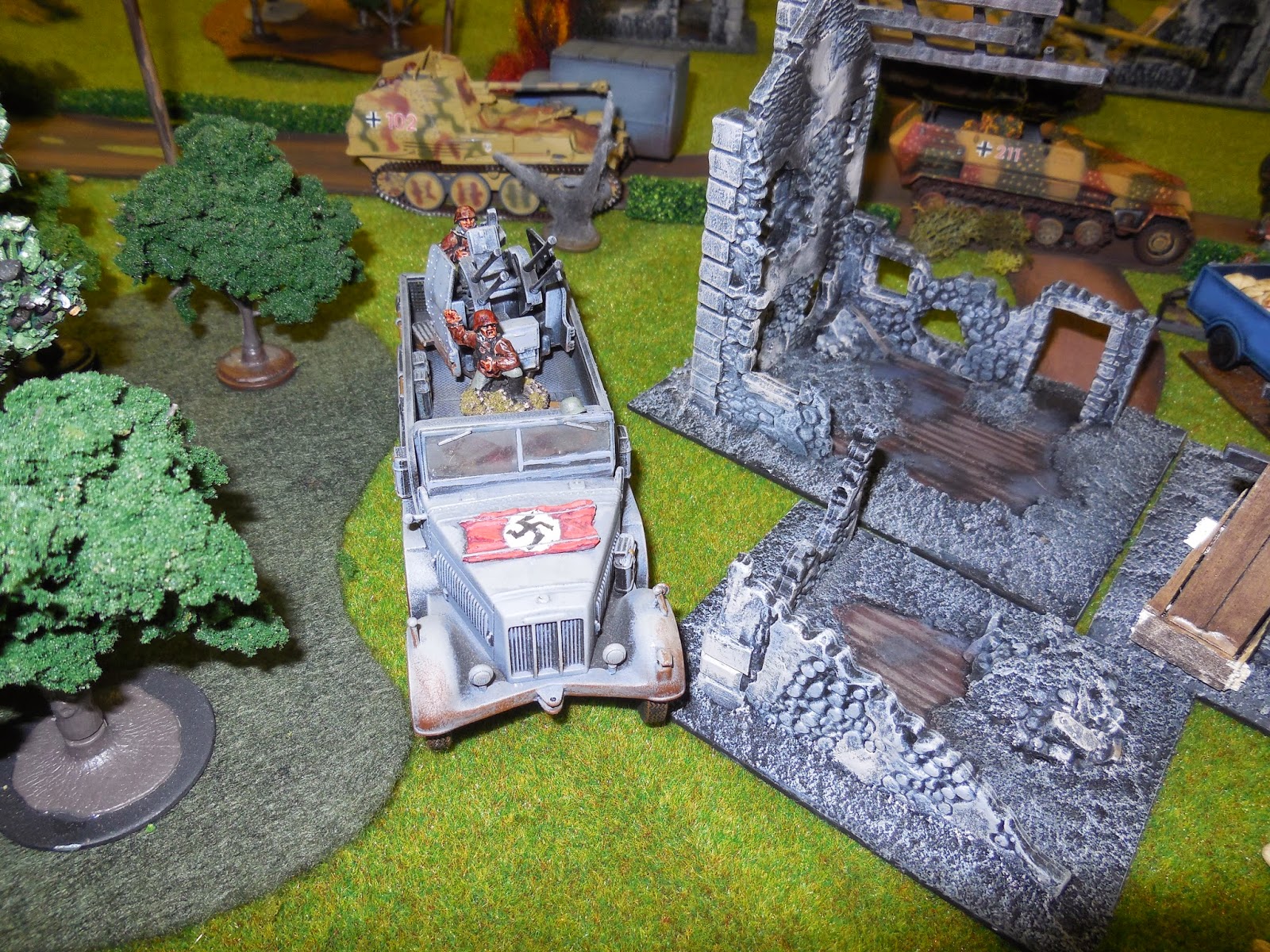 The 7/1 cut around the farmhouse and moved up to engage the paras in the woodline. 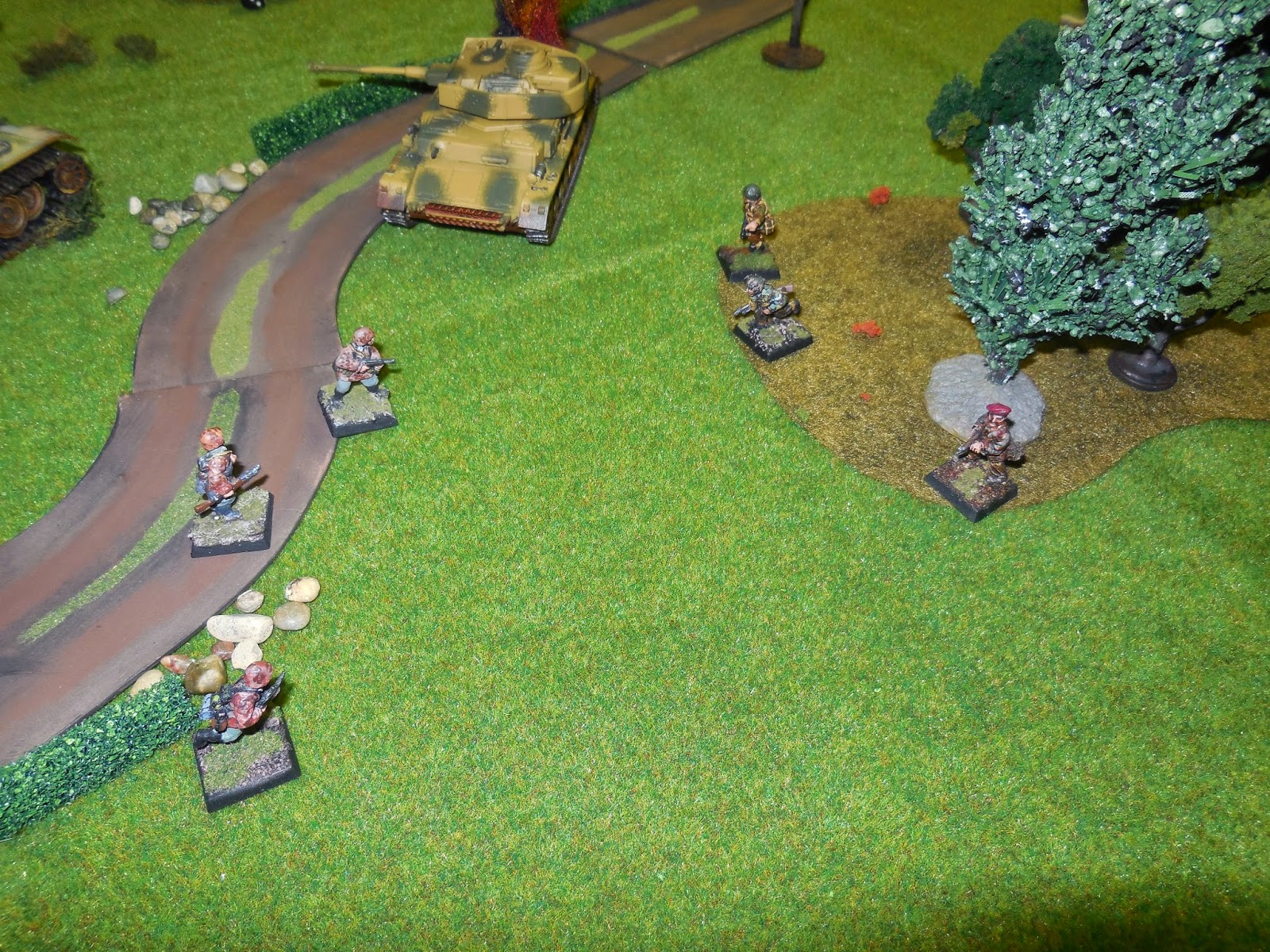 SS-Panzergrenadiers prepare to make a suicidal charge against the few remaining paras in the woods. 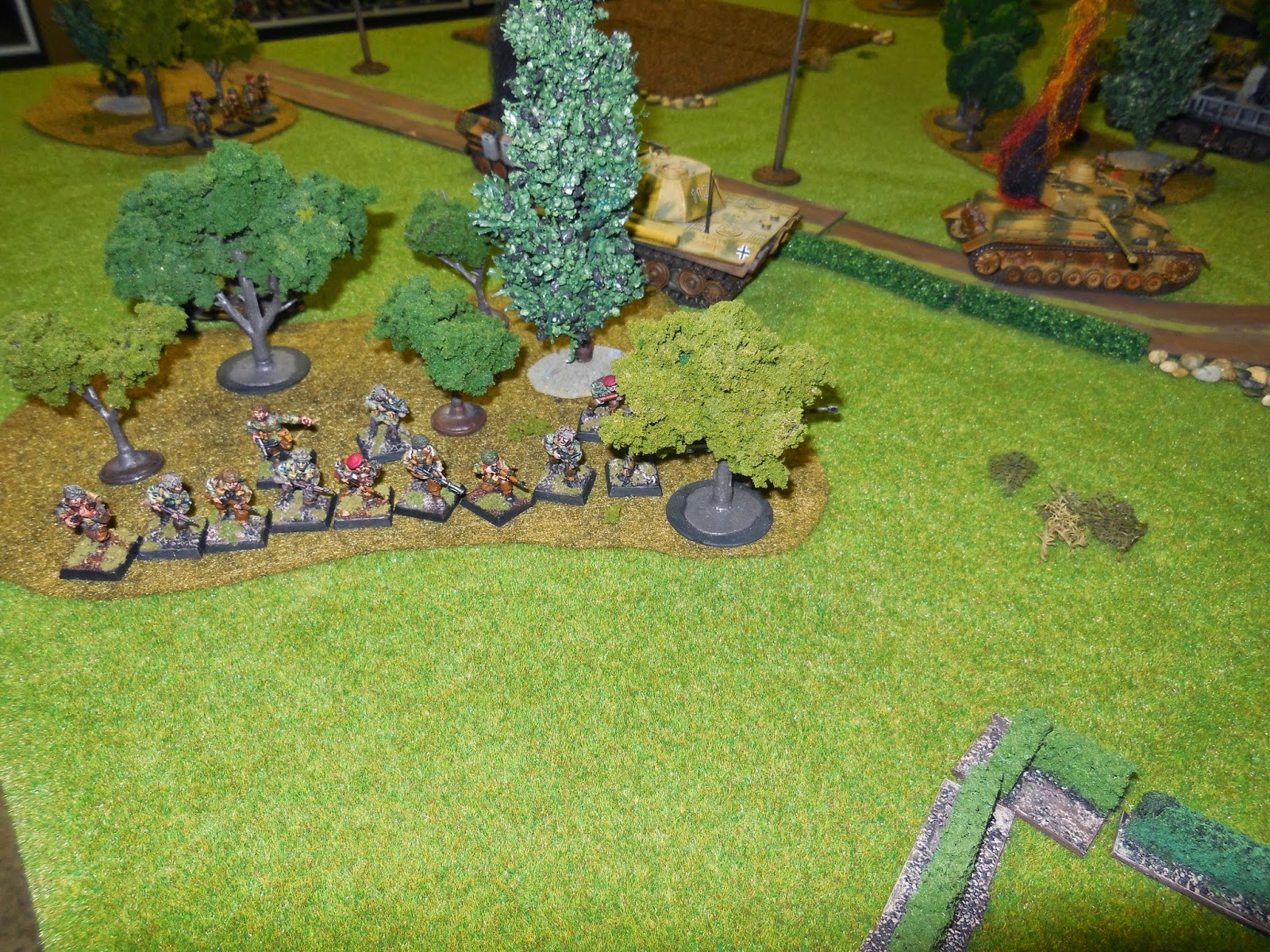 Meanwhile, on the other flank, another section deployed next to the six-pounder (just out of sight behind the small tree at centre). It also nailed the Marder on the road. 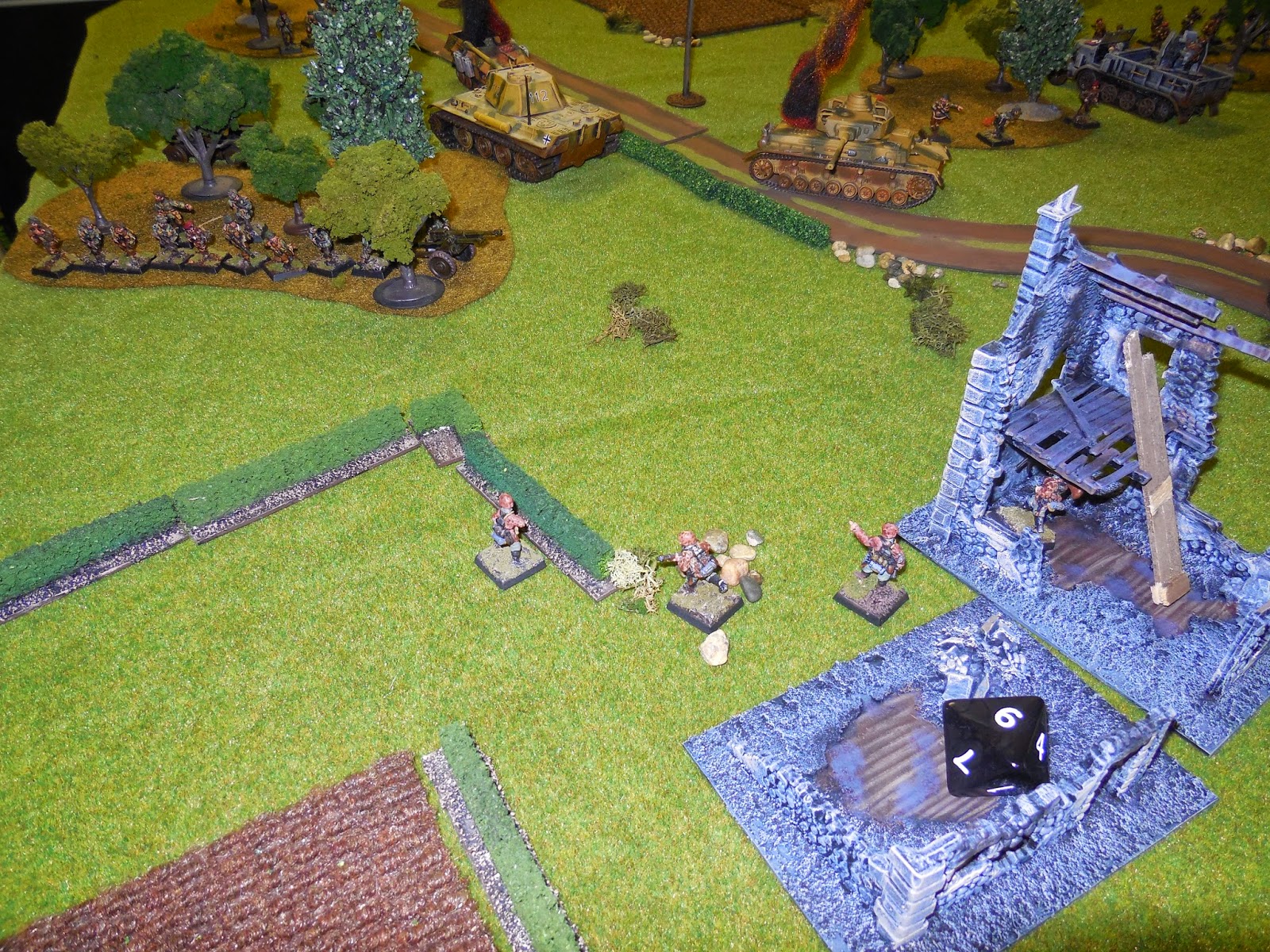 Hugh's Panzergrenadiers suffered heavily from their fire as well. 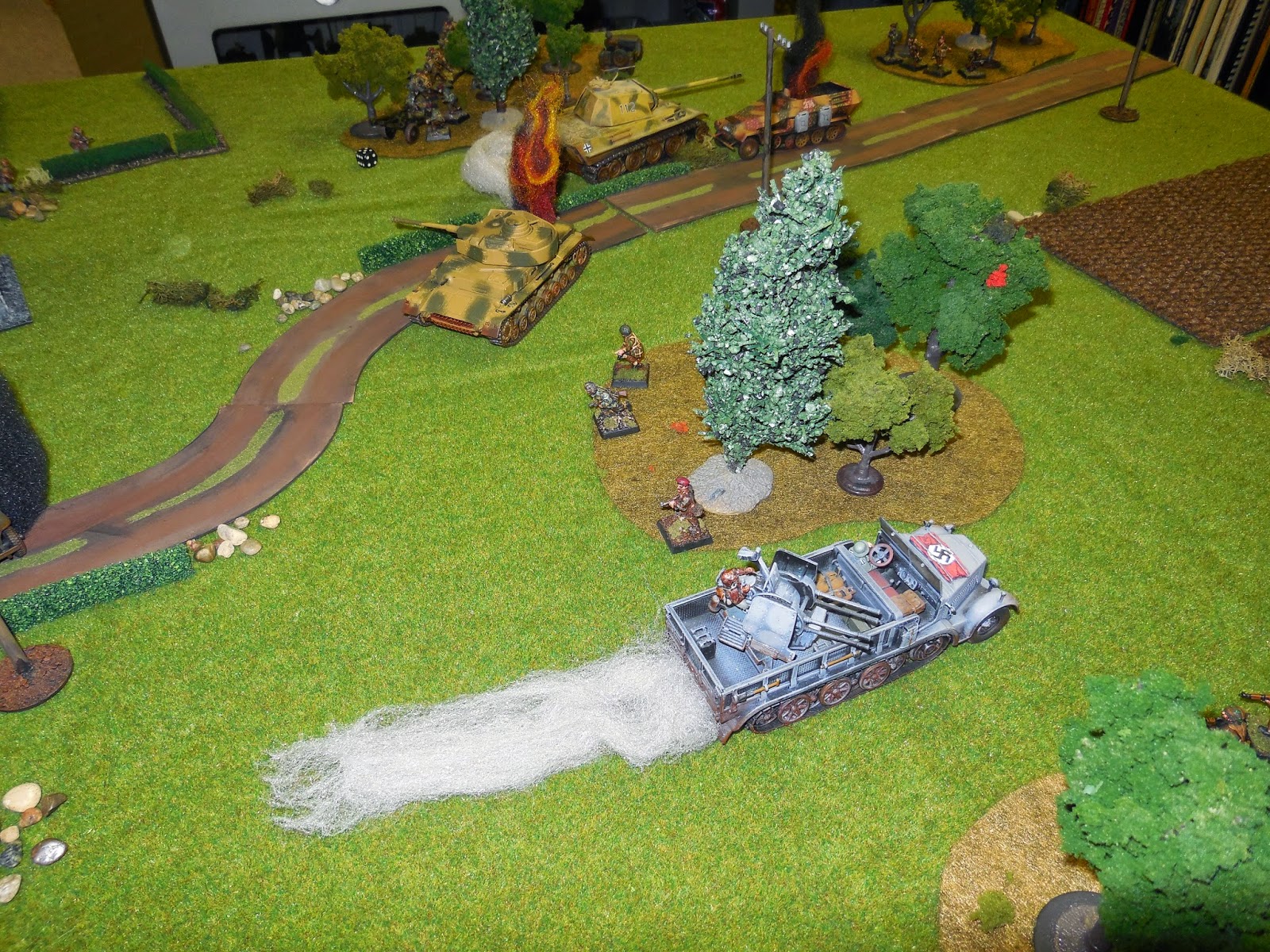 As the clock ticked down towards the 8-turn time limit the Germans decided that it was time to get moving. The 7/1 and Panther moved at maximum speed towards their objective. 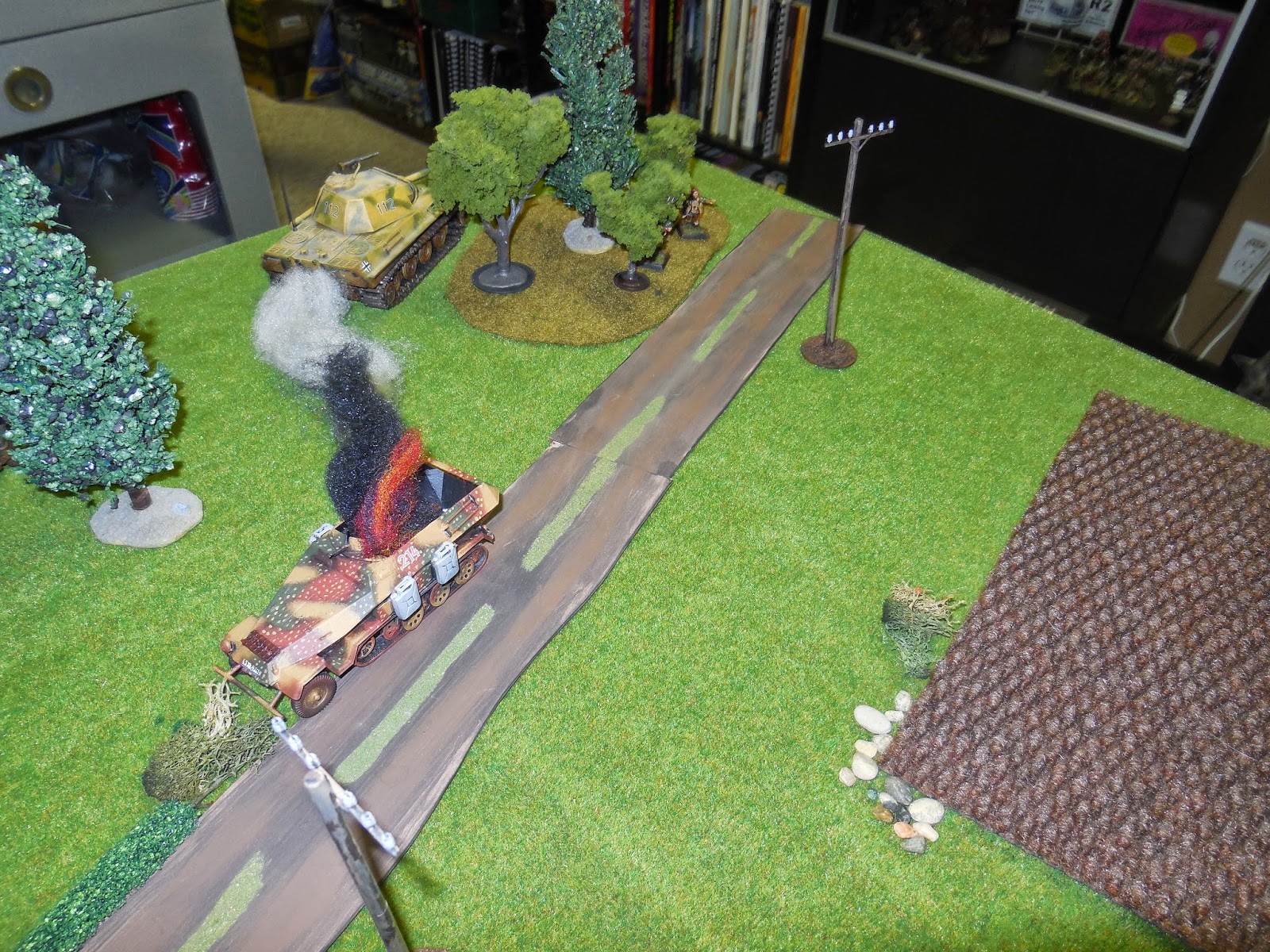 No problems for the Panther, as the only British heavy weapons that could touch it were well out of range (PIATs) or knocked out (six-pounder). 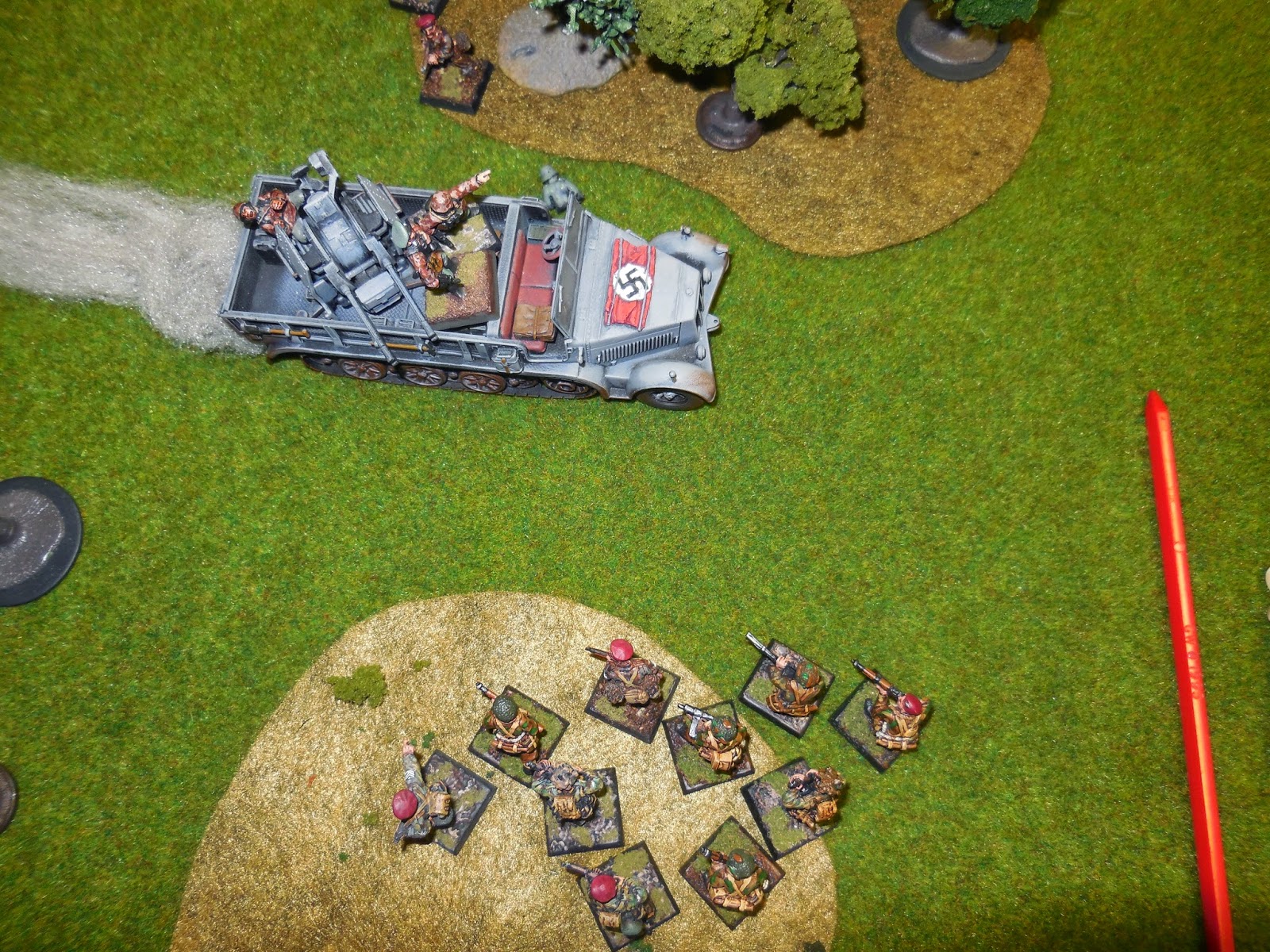 Not so the 7/1... being a softskin vehicle and open-topped it was quite vulnerable to small arms fire. 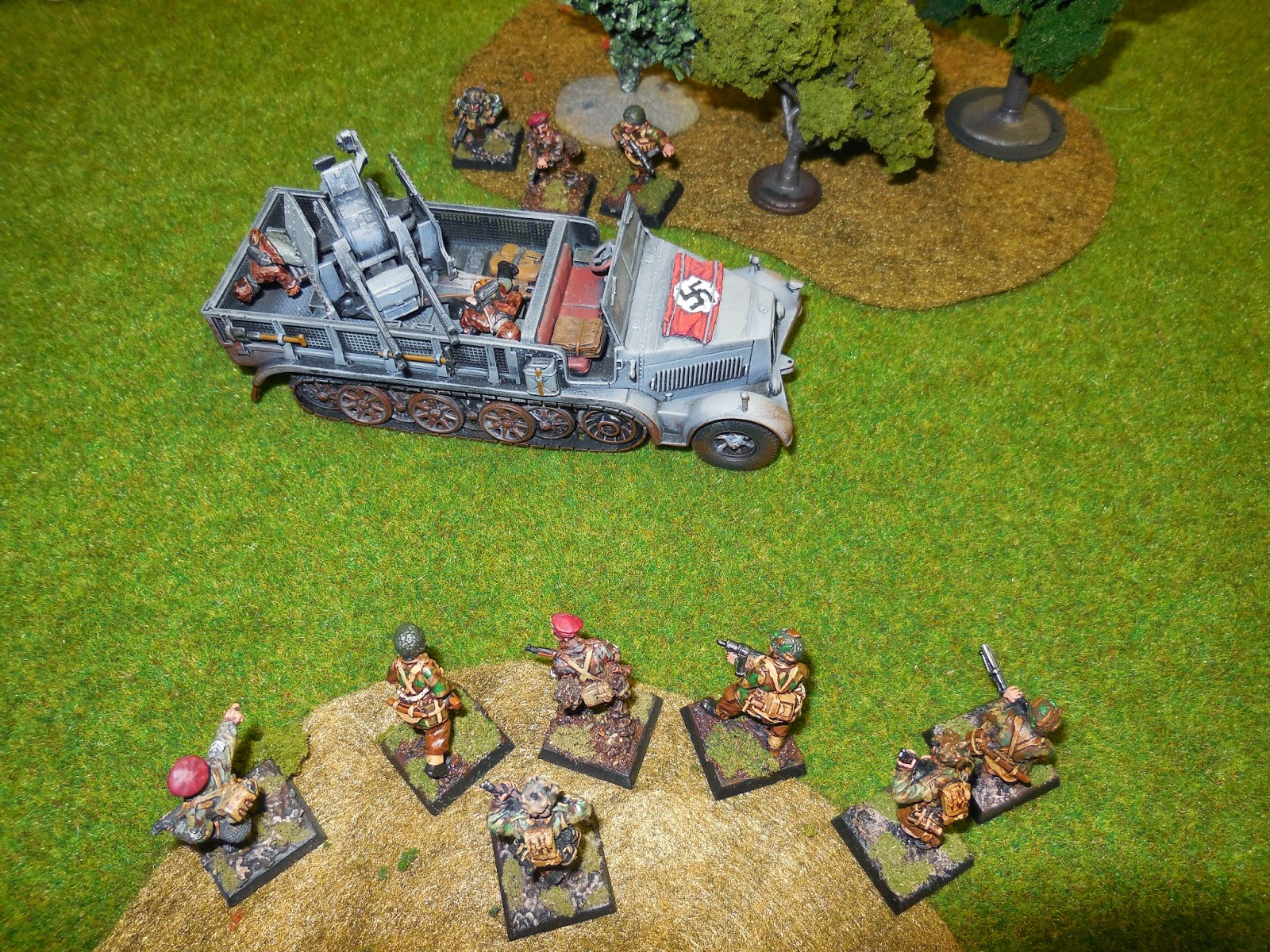 Caught in enfilade from two British units the crew and passengers (the SS command section) were wiped out by concentrated .303 fire :-(

So the Germans got one vehicle off the board in a tough slog. I really like the Blitzkrieg! rules for pick-up games like this. There's not a ton of planning required and the game rattles along well. The rules are old-skool IGO-UGO, but use a "priority" die roll so the sides can flip over as to who goes first in a turn. This can provide for enjoyable fire-and-movement assaults or conversely, a breather and momentum shift in the battle. I've been planning to clean up the ruleset for self-publication with one of those cool Web-based companies... maybe over the wintertime!
Posted by Dallas at 4:21 PM

Thanks for this report dude! It was great to get your 28mm stuff out on the to the table. And your "Blitzkrieg" rules have held up very well - lots of fun.

Now that looked like fun.
Thanks for posting.
Cheers
Stu

Nice scenario and great looking models and terrain. Haven't played Blitzkrieg before but it looks like it plays very well. Best, Dean