Well, pretty soon it will be time for a game against FutureKom - possibly as soon as this week! I have a little over 30 GünSchwarm troops painted, with a smattering of heavy weapons, to make a decent GünTruppe - and of course, the Panther will be a beast for them. However, to have a decent game (and a well-rounded force), the Güns need some more vehicles, so I have been working on painting and converting more vehicles for the force.

Orginally, I wanted to try and use a Solido 1/50 scale SdKfz 251 for the IFVs. Then I thought I would use Rhinos - however, Mike F. now has those for the FutureBritz. So then I thought I would use Chimeras. And I remembered how much I f***ing hate putting the GW Chimera kits together (there is a special place in purgatory for whoever OK'd that track assembly). Some Solido half-tracks showed up in the mail, courtesy of some transactions from TMP. So, I got to kit-bashing with GW's excellent tank accessory sprue and came up with this. 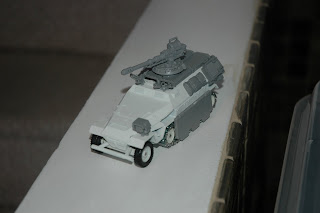 I liked the look, but the vehicle suffered from the "1/56" effect - i.e. it appears laughably too small to allegedly carry 8 to 10 25/28mm scale troops. So, I settled on ditching it for IFV purposes, but keeping it as a recon vehicle. I finished painting it up yesterday. The blurry Gün troops give you an idea of the size. 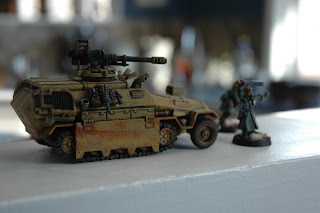 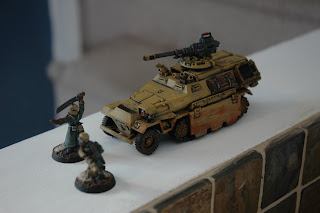 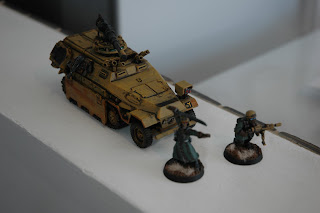 Of course, recon is good to have, but the Güns will need some more tank support, and some mobile flak support, keeping an eye out for the FutureKom jabos! Below is a photo of the next two vehicles for the Gün Panzer Korps - a converted Solido flakpanzer (which already looked sci-fi on its own) and a converted Mark IV Panzer, now sporting an absurd, mostly-recoilless rocket mortar! Seemed like the kind of thing to send in and support the Schwarm at close quarters, particularly in their urban re-development programs. 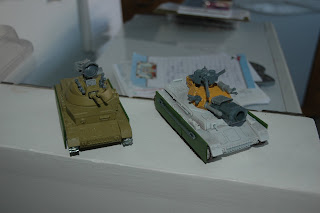 Priority is to paint the Flakpanzer, so Dallas can be sure to roll out his Jabo when we play the first game!
Posted by Greg B at 11:46 AM

Glad to see the Panzer IV has been up gunned.