Awhile back I blogged about a project for this year - Great War Canadian cavalry, circa 1918, for a "Battle of Moreuil Wood" game.
Well, the cavalry has arrived from Blaze Away Miniatures in Australia (cheers Jon!) and so, as a break from painting FuturKom and zombies, I spent a few minutes this afternoon converting some of the troopers.
The Blaze Away figures are really nice but there are a limited selection of poses: officer with sabre, trooper with rifle upright, trooper with rifle across lap, trooper aiming pistol. As I'm building several decent-size units of models, I want to have the maximum variety of poses that I can, and in this case, that means converting. My sculpting skills being none-too-impressive, I'm going for the simplest conversions packing maximum impact in terms of differentiation.
The models that best lend themselves to conversion are the trooper with rifle upright and trooper aiming pistol. Both will be converted to hold sabres - a relatively simple matter (I hope) of cutting off the rifle/pistol, sculpting a hand and sabre hilt/handguard, and attaching a sabre blade.
Anyway, you can judge the success of the conversions from the photos - each converted model is pictured alongside a model in its original state so you can see exactly what was done. 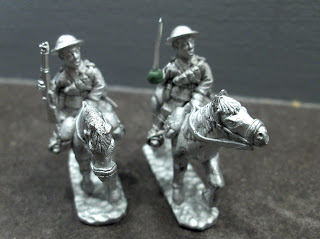 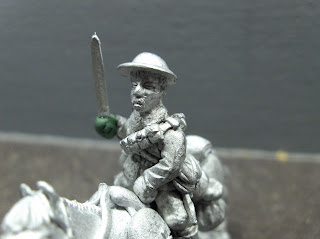 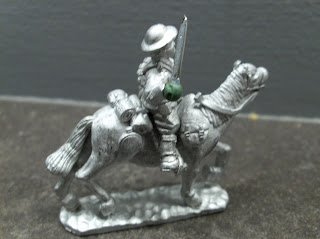 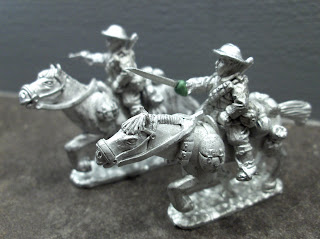 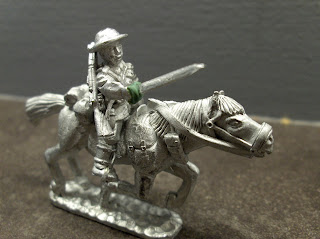 More pics to come as the project progresses...
Posted by Dallas at 8:37 PM

Looks great to me dude!

I should post an updated pic - I have tweaked the sword arm a bit to reflect actual doctrine - the back of the hand is supposed to be "up" with the palm down... makes the model look much more like he's aiming to skewer a Jerry!!

I was actually waiting for Mike Snorbens to notice that...