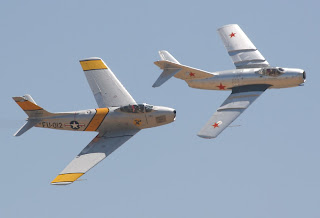 Just then, out of the corner of his eye, Boris caught the faint glimmer of F-84s far below... Ah, little fish, Boris thought, our first catch of the day.... "Flight lead to flight, we have Thuds below at 15, 3 kilometers ahead. Let's show these cowboys how the bear bites!" Boris nosed the MiG-15 into a dive, letting loose the fury of his twin 23mm and 37mm guns as the F-84s filled his sights. He could see the rounds strike the canopy of an F-84, splattering American Apple Pie all over the cockpit.

Boris called to his wingman, "Your turn Alexei, show our Korean friends how it's done!" As Alexei's MiG rolled into a screaming dive, a yell came over the radio - "SABRE, SABRE, SABRE!" Boris grinned to himself... "now we will see what the Americanskis can do."
Posted by Greg B at 11:13 AM