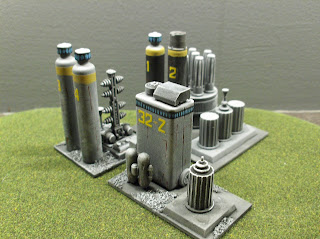 The warning klaxons sounded suddenly, so loud they pierced the almost-deafening mechanical noise of an Imperial sludge-reclamation facility operating at full capacity.

Shift-Supervisor Second Class Jax Paxton checked his wrist-chrono. "Too early for midday nutrition period..." he thought. "I wonder what th-"
Paxton's thought was rudely cut short by an inch-thick bullet from an Ork Big Shoota entering, and then rapidly exiting, his temporal lobe. As Paxton's lifeless corpse dropped to the metal decking, overhead a flight of Ork Fighta-Bommerz streaked past, trailing black smoke from their overloaded turbine engines, skidding across the sky to make another strafing pass on Imperial Sludge-Reclamation Facility (Vraks Pattern) Ref. 32-Z. Looted Marauders, gaudily painted in Orkish "go-fasta" red, loosed shrieking volleys of air-to ground rockets against their targets.
Imperial ground defences sprang into action, the shining trails of anti-aircraft tracers arcing into the sky, here and there exploding into jagged black shards of flak. Thunderbolt interceptor aircraft of the Imperial Navy weaved across the sky, lascannons and heavy bolters spitting at the Ork aircraft crossing their sights. But can they drive off the attackers before the facility and its precious toxic sludge reserves are destroyed by the manic Ork Flyboyz?
Find out on Thursday as we try out Forgeworld's "Aeronautica Imperialis" rules for aerial combat in the world of Warhammer 40K. Usual time, usual place!
Posted by Dallas at 8:12 PM

I love the industrial buildings. They look great!

Looks fantastic as always Dallas. Looking forward to it.