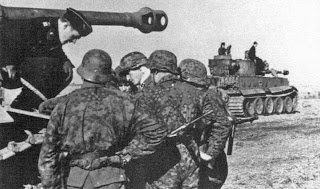 "Listen - I know there is a Russian tank brigade out there and our 88mm guns could deal with them, but I'm just saying the command arrow is moving toward Orel. If we don't move at least half, we'll be out of Command, and Manstein will need to make a morale check to keep our battalion in the game..."


Actually, I shouldn't be hard on Arty - after all, Spearhead and Shako (to name just two sets) are excellent, well thought out rules that have been published. I have had the pleasure of working with Dallas to tweak his excellent 25mm skirmish rules. Rules actually created by Greg? Zero.

Still, just imagine how great Spearhead and Shako would be if they had put some time into an editor for the books (or in the case of Shako II, a buck or two on making the book at least appear to not have been a photocopy).

All the same, in terms of ease of use for the lads, Spearhead is tough - needing a map, writing orders etc. It achieves so much in terms of compensating for the players' helicopter battlefield view, and creating situations where order changes are easier for some than others, allowing a differentiation to be created among national doctrines without resorting to lame-o 40K-style special rules like "British Bulldog" and "Tiger Aces" (Battlefront, take a bow).

The Blitzkreig/Cold War/Future War Commander tried to compensate by essentially re-purposing Warmaster. But as we have covered elsewhere in this blog, the results can be unsatisfying.

I have been playing around with my own possible versions of some new 6mm, platoon based rules. But in the end, I think it's just a modification to the Spearhead engine that is needed. I have managed to put my time sitting in planes and airports to good use this week, and have just about developed a new movement system for Spearhead, where the battalions (the basic Spearhead unit) are activated with a command roll that combines a command rating attribute of the Battalion Command and the higher-level command of the given formation.

You roll 2d6, trying to roll below the combined number, and if you succeed, you move.

All the firing etc. is resolved as normal as per Spearhead, except that a formation that tried to move and fails still fires as though it moved. Why reinvent the wheel? And no rolling just to fire, and no endless volleys of fire from hot-rolling, high-morale units.

Hopefully we can try this out soon. And if it sucks? Back to the drawing board...

I think the ability to do something even if you fail a command role is a huge improvement.

Especially for shooting! With a platoon-level simulation, rolling just to have your guys fire is ridiculous...

But rolling to have your guys fire, and then fire again, and then maybe 4 more rounds each is AWESOME. (Unless you're trying to have fun)

Cam, I'm pretty sure the barrels would have melted off the main guns of those T-90s...or at least they should have!

Oh, I entirely agree. My point was that I was pretty much the only one laughing when it came time for me to start rolling 30 dice. Again. For the 8th time. And even I wasn't laughing that hard.