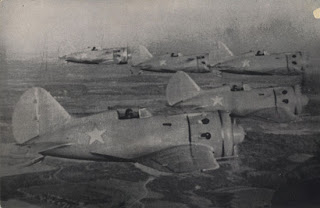 (that's a Winnipeg inside joke)
Anyway, if you've been following the blog (and let's face it, who hasn't?) you'll have seen my latest foray into sci-fi with Pig Iron's excellent Kolony Militia http://wpggamegeeks.blogspot.com/2009/01/pig-iron-project.html. I decided to do mine in a future-Soviet theme which I think fit the miniatures perfectly. Originally the plan was to do Pig Iron infantry to match up with Rackham vehicles for AT-43 but as these things often do, it's spiralled a bit out of control...
So far I have 22 Pig Iron models finished, plus their supporting SU-300 http://wpggamegeeks.blogspot.com/2008/12/sci-fi-assault-gun-conversion.html as well as a BTR-60 carrier and what I call the T340-32-2, a 1/43 T34 model that's been hacked around with twin 32mm cannons in the turret and a hull-mounted laser cannon (!). It's on the table in the basement about to be primed.
So with some vehicles done, and a few more (10) Kolony Militia on the way from Brandon at Rattlehead Games, it occurred to me that a neat project for the interim would be a ground-attack aircraft ("flyer" in sci-fi parlance). I wanted something that suited the future-retro theme of the force, plus had a Soviet flavour, if possible. It had to be compact, mean looking, and able to be loaded down with an unfeasible array of weaponry.
Enter the Polikarpov I-16 "Rata" in 1/48 scale... 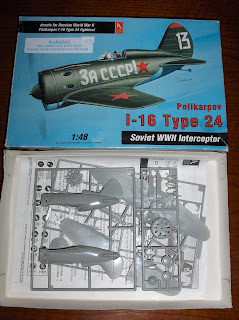 I-16 from Hobbycraft... note the "Warning" on box cover from Pete. When I bought it, we checked the parts and they were complete. However he warned me that "we don't guarantee that a Hobbycraft kit won't be crap..." thanks Pete ;-)

I always have liked the look of this aircraft. It has the look of the pre-war GeeBee racer, all nose with the cockpit crammed up against the tail. I wanted something that looked like it was basically all-engine, and the I-16 fills the bill nicely. However, piston engines and propeller drive would hardly fit the futuristic theme of the rest of the force, so some conversion was in order...
I happened to have a few brass plumbing bits left over from doing the conversion on the SU-300. I had bought a few different pieces to try out for the main gun of the vehicle. They were cheap so I figured I might as well buy a few rather than have to go back to Rona later. One of the pieces looked like it would make a nifty jet engine. I hacked into the fuselage to make room for it, and started cutting up the front end to make a giant intake where the piston engine and propeller live. 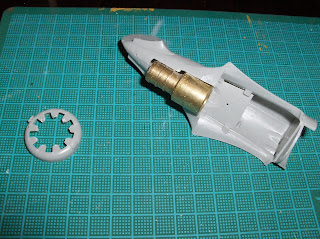 Point of no return...
Of course, where I positioned the engine happened to foul the floor of the cockpit ever so slightly. I was able to modify the latter with a few (dozen) swipes of a half-round file and it fit nicely. 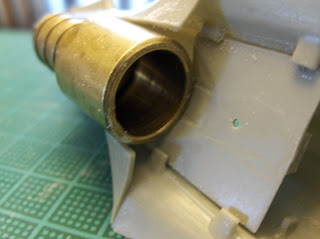 I continued with assembly of the rest of the plane after that. A surplus GW Imperial Guard autocannon fit underneath the nose, HS-129 style, while the rocket pods from a Whirlwind launcher were cut apart and positioned under the wings on pylon-mountings. 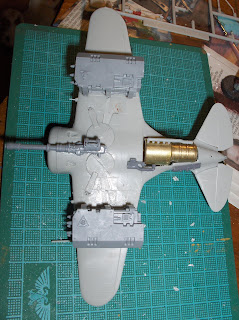 I also found some bits in the bits box to detail the new jet engine. 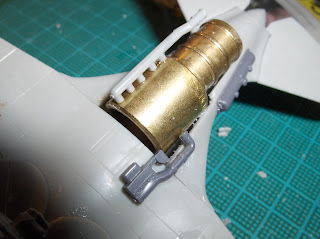 There was a bit of an issue caused by my ham-handed hackery on the fuselage to fit the new jet engine. I cut some strips of card to hide the worst of it and greenstuff and more detail bits would be applied to conceal the rest... I hope! 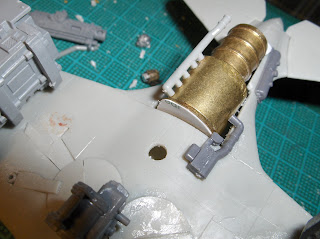 I would have preferred a closed cockpit model but the one available at my local hobby shop was an open cockpit variant. So rather than screw around with more plasticard and greenstuff I decided to add a pilot. Fortunately I had purchased a pack of Copplestone's "Pilots" from his Back of Beyond range. The pack included a few half-figures so one of these was decapitated and slotted into the cockpit. 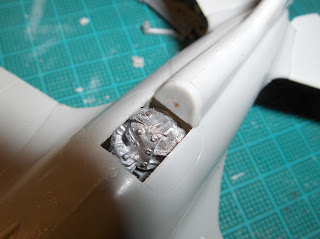 (Don't worry, he'll have a head swapped on from the Pig Iron standard bearer. This model had an odd head that I thought never really suited an infantry model, but which I think looks great on a pilot)
The last thing to do was to detail the front intake. I had another brass plumbing bit to use bit it was kind of plain and stuck out from the nose quite a bit; I wasn't sure of the aesthetic (not that this would have bothered the Future Commies, but whatever...)
I hit the Home Depot this afternoon and found a suitable bit there, again in the plumbing section... it's called a "flare nut" and I think it makes a relatively convincing jet intake... 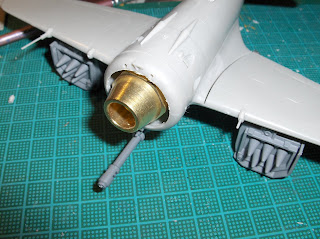 Flare nuts ahoy!
Of course no description of the project would be complete without mentioning the assistance I got along the way... Gillespie was a big help in keeping the model box from going anywhere ;-) 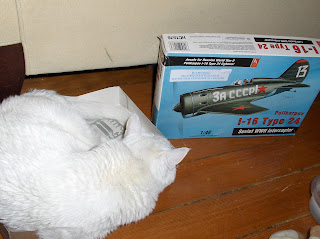 Looks comfy, eh?
Seriously, I gotta say a big thank you to Conscript Greg B for the GW Imperial Guard sprues I've used on these sci-fi conversion projects, they are a real life-saver! Anyway, here are some pics of the finished model: 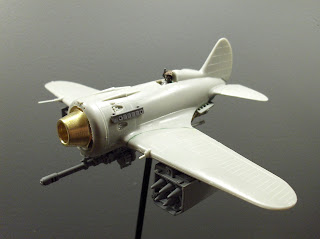 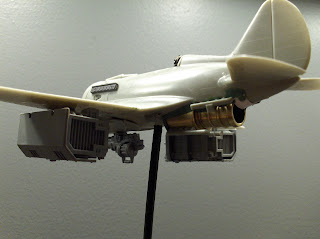 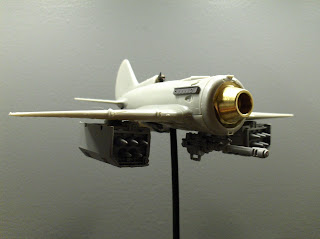 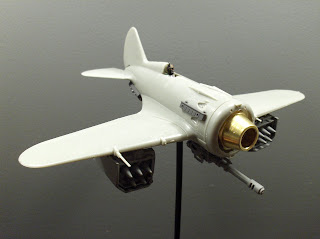 Some statistics on the project:

Thanks for reading this, and if there's interest, I'll post an entry on painting the beast!

Dallas - that is awesome!

I've started on the "Opfor"..stay tuned for postings on the progress of a Panther MK MVMVXVII....

Insane, I mean how does the pilot see to land, but truly lovely

well done and thanks for sharing. I love hacking about cheap kits myself and this was inspirational

Thanks guys! To your comment, Ed, I'd actually considered mounting a heavy bolter on top of the fuselage in front of the pilot... just to ensure zero forward visibility! Decided against it tho'.