Wings of Glory - Break Through

Just before Christmas,we finally returned to our long-running Wings of Glory campaign. For that night’s game, the second game of the campaign set in early 1917, the scenario was Mission 5: Break Through:

Capitalizing on recent victories, German HQ has put more emphasis on controlling the skies.
Type: DogfightVictory
Conditions: Mission Points. At the end of each sortie, calculate each side’s Mission Points. The side with the most points wins the mission.
Fallback: Mission 4a
Setup: Mission should be played length wise on a 4’x6’ table. The German Attackers have a 12 inch deployment zone and the French Defenders have a 36 inch deployment zone. This leaves 24 inches of No-man’s Land.

We drew cards, and manged to avoid both random Balloons and Ground Targets.

Frederick and Kevin ran, respectively, the Germans and the French. Since it was 1917, one pilot character on each side got an upgraded plane: a hex-camouflaged Albatros D.V. (Frederick) and a yellow SPAD XIII (Brian). Kevin ran a silver Nieuport 17 with twin MGs, and I ran a relatively elderly Albatros  D.II painted in the colours of Oswald Boelcke.

Below are the combatants, from L-R, D.II, SPAD, D.V., and Nieuport: 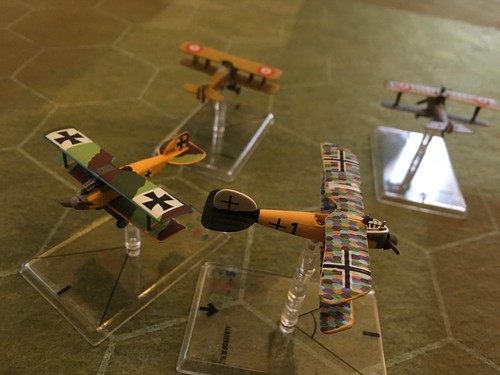 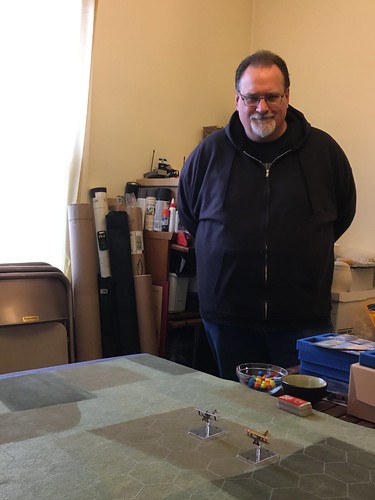 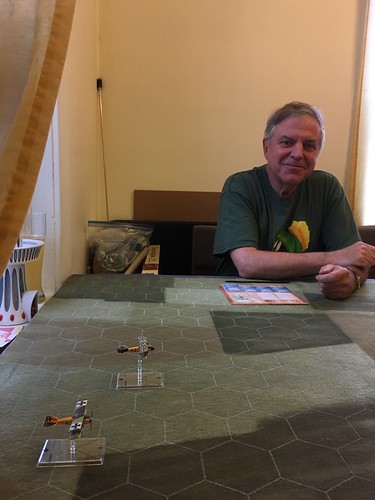 Below, the two flights set off against each other. Nearest is my Albatross D.II. 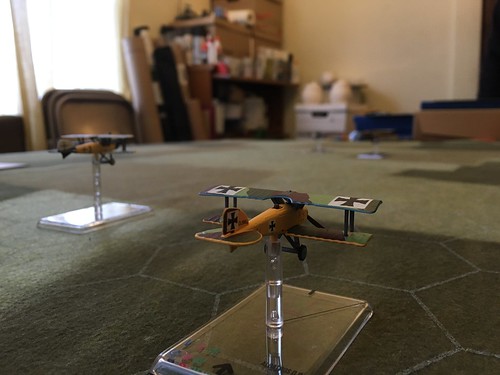 The two sides flew past each other, the French to the south, and the Germans to the north (below, looking south): 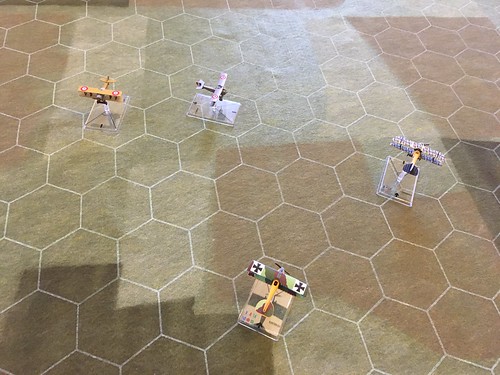 Below, three of the four planes turned and got firing solutions right away, with the Albatros D.II and Nieuport taking some hits (my Albatross took 5 points of damage in one shot!). 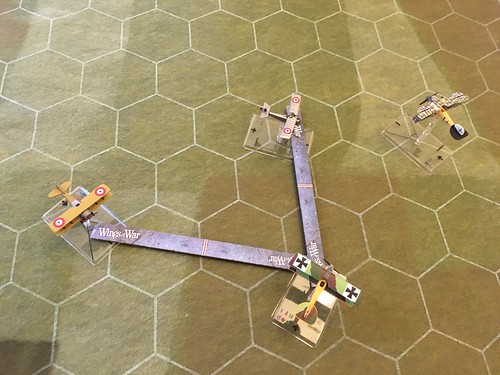 The fight got really mixed up as the planes kept jousting at each other. 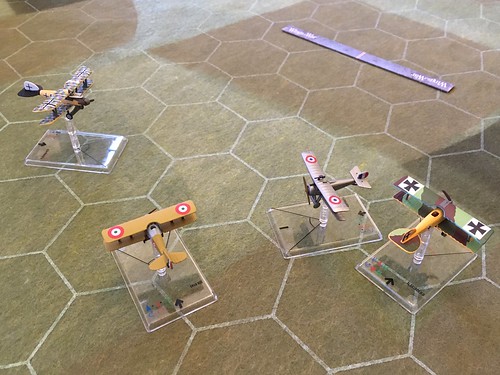 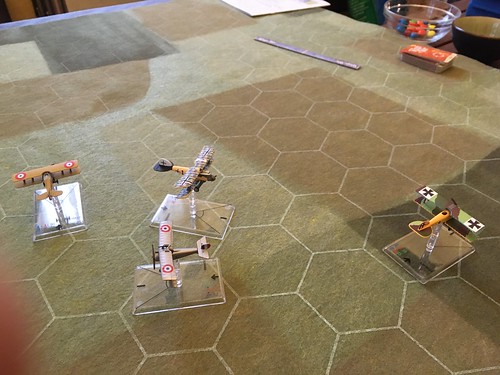 After a couple of Immelmann's, Kevin and I lined up on each other again. 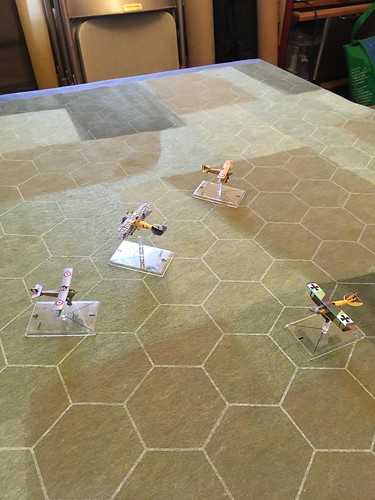 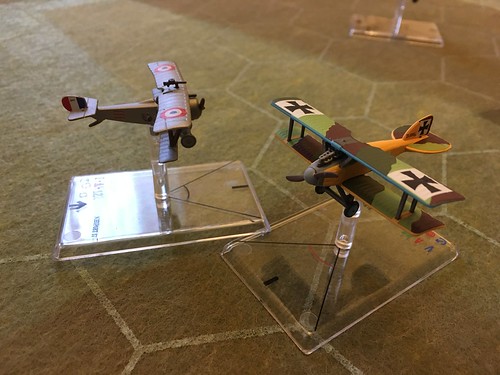 Later, my Albatross and Brian's planes avoided a collision. 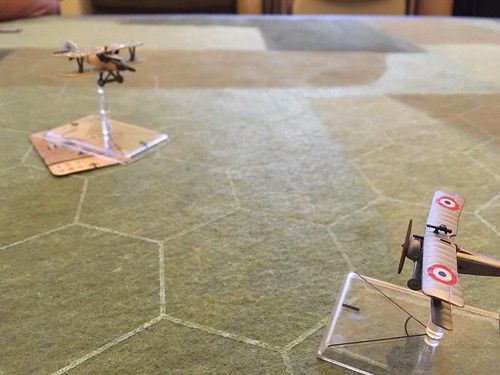 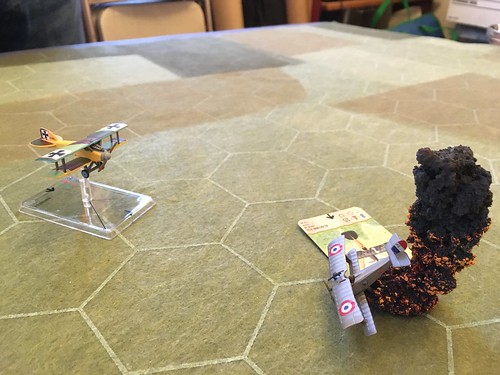 Brian, wanting revenge for his comrade, started after the D.II. 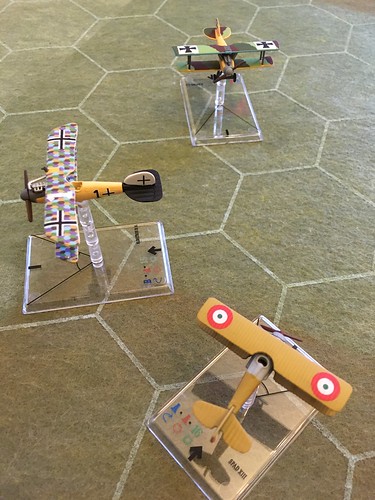 Frederick came to my aid, flying under me. 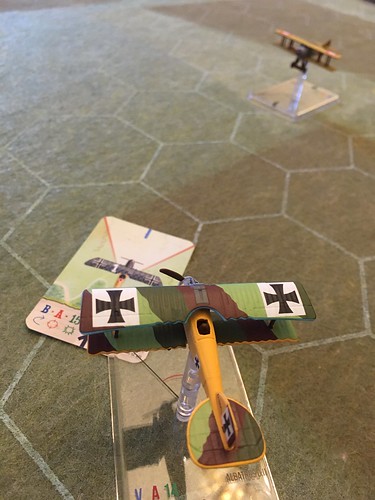 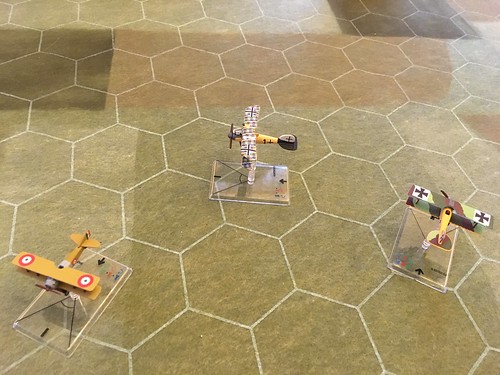 Frederick trailed Brian for a bit, but the latter pulled another Immelmann... 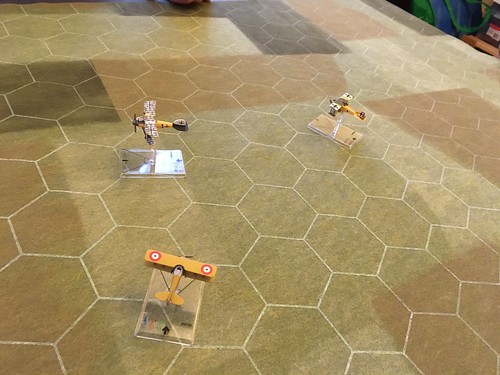 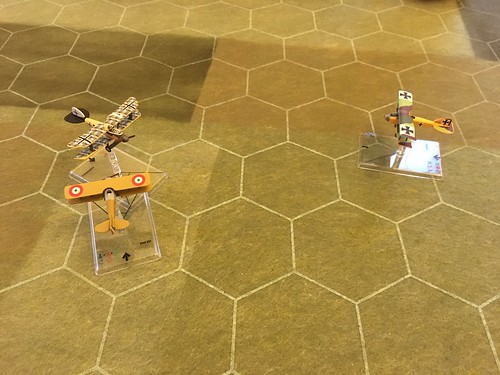 ...then went head to head with the D.II., shooting my plane down. 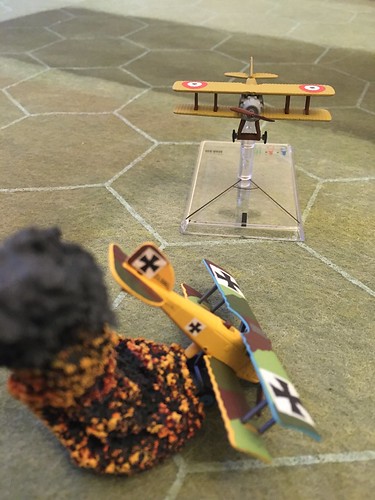 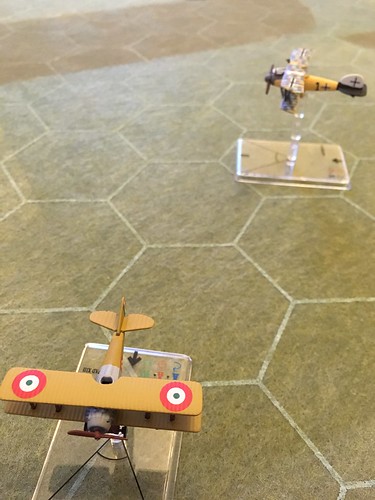 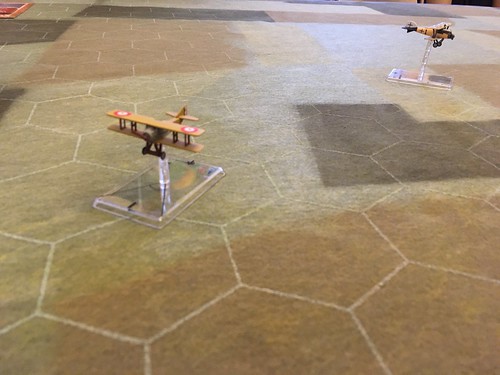 ...before turning around to dive for the western (Allied) board edge. 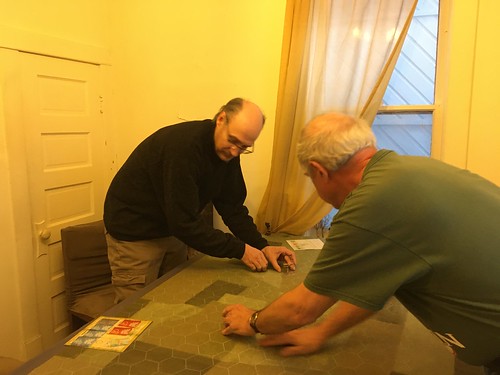 The fast SPAD blew right past the Albatross D.V. 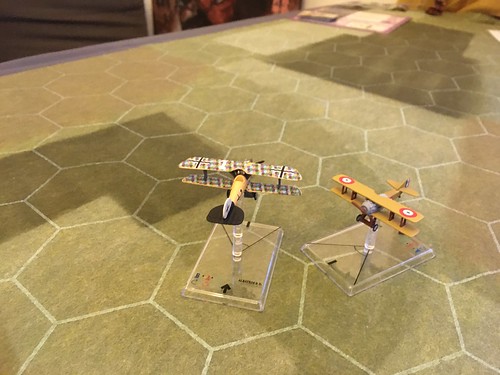 Frederick got some shots into the SPAD, but not enough to bring it down, and chased Brian off the table. 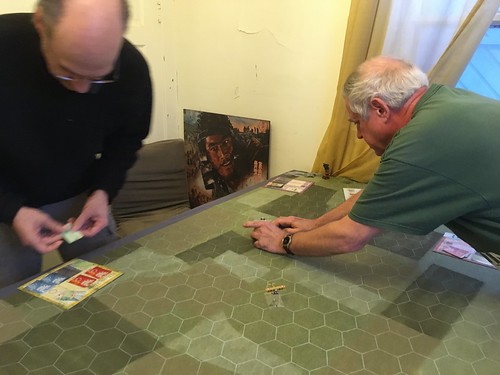 The current standings in the campaign (as the moderator, my results do not count):

I have also purchased the Tripods & Triplanes supplement for Wings of Glory from Ares Games. The story is as follows:

March 18th, 1918: the nearest approach of planet Mars to Earth. The First World War suddenly changes into a War of the Worlds, when what appears as a meteor shower falls over a wood in Alsace. A few hours later, just after dawn, an army of giant alien fighting machines appear out of the trees and starts burning villages and houses with their lethal heat-rays, leaving pestilential trails of black smoke behind them.

A truce is hurriedly signed between the warring nations and, against the advancing Martian tripods, the best war machines of Earth are dispatched, manned by the most gallant and skilled warriors of our planet!

The supplement includes both a Nieuport 16 (armed with Le Prieur anti-balloon rockets) and a small Martian "Locust" Tripod. Le Prieur rockets seem to function well against the Martian invaders. I currently have four such balloon-busting Nieuport 16 models, flying under the flags of France, Italy, and Britain.

Below are examples of the Martian Locust Tripod and an RAF Nieuport 16. 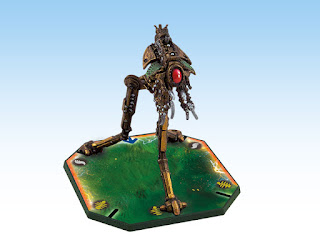 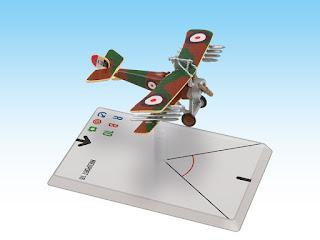 With another couple of Martian Tripods ordered, I look forward to running some alternate-history sci-fi games!
Posted by DaveV at 2:19 PM

All the best for your projects in 2020

such a great game!

I like the look of these planes.
Very nice report Dave!

I added a note about the Tripods & Triplanes game supplement. We ran out of time, otherwise we would have tried a Tripod vs. Entente/Central Powers Coalition game.

I do have fun playing this game. The mechanics are simple, allowing new players to get stuck in right away. We've been pushing around some of these 1/144 scale planes since the game (Originally entitled Wings of War) came out over a decade ago. Most of our planes are the pre-painted metal models from (now) Ares Games. I do have a couple of 3-D prints and a couple of F-Toys kits.

The new supplement will allow us to try out stuff not possible during our ongoing Wings of Glory campaign. Imagine a German Rumpler C.IV trying desperately to gather photo intelligence of the Martian invaders, protected by the best French and British pilots flying Nieuports, SPADs and Sopwith Camels!

My only "beef" (mild, at best) with the Tripods & Triplanes supplement is that the kit does not, in fact, come with a Triplane! A Fokker Dr.I or a Sopwith Triplane would have been very thematic.